Taylor blasts the monkeys off his back

Mark Taylor made a century. 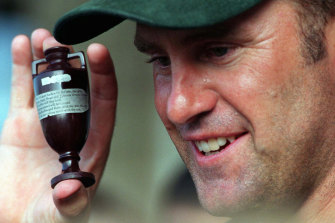 It is said that if enough monkeys had enough word processors and enough time, one would eventually, by chance, write Macbeth. But the monkey who wrote the above would until this weekend have torn up the paper, put his head in his hands and wept at such a piece of doggerel.

The least Taylor had in his favour was that his captain was one of the few remaining people in the world who still thought he was not an embarrassment to himself and a liability to his team. One of the others was Kieren Perkins, who sent a facsimile message to Taylor to say so on Friday.

Pals, peers and predecessors lining up to line him up, including a particularly insidious attack by former coach Bob Simpson the day before the first Test. “That’s life in the fast lane,” Taylor remarked to coach Geoff Marsh.

Marsh, for his part, admitted: “I knew that he was never going to give in, but I was getting a bit worried.” Steve Waugh said: “you would have had to have been an optimist to believe” that he would make runs again. Marsh said selection meetings had become tougher and tougher, and neither he nor Waugh could say categorically that this would not have been his last Test innings. 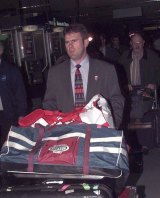 Mark Taylor arrives at Heathrow under heavy pressure for the Ashes series.Credit:AP

We, the press, had also given him up. True, one reporter put $200 on him at 25/1 to make a century in this match, but that was not so much unshakeable faith as irresistible odds. We will dine well on our words; he can buy the drinks.

Taylor might choke to think that we were eating out on his account, but then again he might not. The other miracle of this saga is that his demeanour, whether in the change room, the field or the press conference, has not changed.

And what about the match? Trailing by as many Test runs as Taylor has made in 18 months. Down, for all he knew, to eight-and-a-half players with Mark Waugh and Jason Gillespie already invalids and Greg Blewett’s knee worsening by the minute.

Almost three days remaining. An Ashes dynasty on the line. Taylor’s last remaining defence was that Australia was still winning the important matches, but now…?

He had more monkeys on his back than in all of Africa, including Madagascar. And that was before he took block.

Somehow, it was different immediately this time. Marsh and Waugh both noticed that his game was more compact, his defence straighter, his footwork crisper, his judgment keener about which balls to play and which to leave.

The most propitious sign of all was that he had back his old faculty for playing and missing. Such edges as there were flew wide or fell short. These are the margins in which whole careers are annotated.

It wasn’t especially pretty. It never has been with Taylor. It worked.

England helped at first by bowling too near to his legs when all his trouble has been on the line of off stump, and by setting a conservative field. The first 50 came smoothly and rapidly. In the dressing room, magazines were closed and Gameboys put down.

Still, it would not be easy. Rain interrupted twice. England tightened up, and so did he. Darren Gough and Andy Caddick bowled torrid spells at him, hitting him in the hands, chest and shoulder. “How many times did he get whacked?” asked Marsh.

Monkeys on his back, gorillas at his front. They spared him nothing, least of all runs. Steve Waugh thought they did him a favour. What was a few bruises beside the mental battering of the past few months? This was life in the fast lane, pot-holes, speed bumps and all and it was preferable by far to the parking bay.

Tiredness set in. He spent half an hour on 89, another quarter of an hour on 99. The dressing room fell silent, its nervousness as palpable as Taylor’s own. Finally, he pushed Caddick to cover for surely the most precious run of his career.

Steve Waugh said it gave him goosebumps. “It was one of the best Test match hundreds I’ve seen for overcoming pressure and against the odds,” he said. “It was a class hundred, not lucky or scratchy. They bowled well at him. He played really, really well.” Marsh, voice cracked, said: “It was a pretty emotional time for everybody because, let’s face it, the guy’s been struggling. He’s had enormous pressure on him. But no one could break him.”

Taylor’s temperament has been even throughout this ordeal, and it did not change now. He raised his bat to the crowd and the change room, but resisted any temptation to jab it at press or commentary box. Whatever criticism he had attracted, said Marsh, and however unfair he thought it, he had never put it before the paramount need of the team.

England captain Mike Atherton, whose last piece of gamesmanship had been to try to have the ball changed when Taylor was 99, stopped by between overs to congratulate his opponent, for what unites cricketers in these moments is stronger than what divides them.

This was Taylor’s 15th Test century, putting him in an elite. Or back in it. Perhaps it will be his last, but who would dare to predict it now? Probably not even Simpson. It was also the third time Taylor has started an Ashes tour of England with a century in the first Test.

And what a difference it made: 133 for the first wicket, the first hundred stand since Taylor’s slump began; 123 more for the second wicket at last count. A change, if not a transformation, in the match. Whatever transpires in the Test, let it be recorded that at the end of Saturday, Australia had picked up the faintest scent of victory. This was, as never before, the captain’s innings. Or I’m a monkey’s uncle.