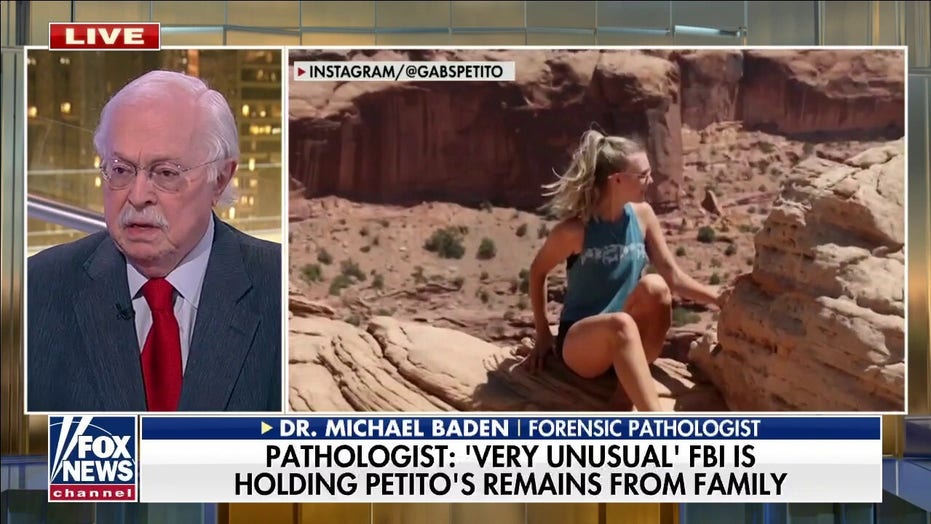 Dr. Michael Baden: ‘Very Unusual’ that FBI has not released Gabby Petito’s body or cause of death

Gabby Petito told a police officer on Aug. 12 that her fiancé, Brian Laundrie, didn’t believe in her dream to create a website and blog, but she was apparently able to edit and publish an eight-minute video when Laundrie left her for nearly a week in Salt Lake City while he flew home to Florida.

The video, entitled “VAN LIFE | Beginning Our Van Life Journey,” was posted to her YouTube channel, “Nomadic Statik,” on Aug. 19, two days after Laundrie traveled to Florida to close a “storage unit to save money,” according to his lawyer, Steven Bertolino. During an interview with Dr. Phil, Petito’s family attorney Richard Stafford suggested Laundrie stole Gabby’s credit card to fund the flight.

Petito’s inaugural blog video was a recap of the couple’s first weeks on the road and has now been viewed more than 5 million times. She also documented her travels on her Instagram account, and was in the process of creating her own website before she was killed.

Another YouTube channel, “True Crime Rocket Science,” suggested in a video on Wednesday that Petito’s channel may have been inspired by the Academy Award-winning film “Nomadland,” which chronicled a woman’s adventures through the west in a van.

On the Aug 12. bodycam video, Petito can be heard telling the Moab police officers that she had been doing work on her computer that morning when the couple started fighting.

“I just now quit my job to travel across the country and I’m trying to start a blog. I have a blog. So I’ve been building my website. I’ve been really stressed and he doesn’t really believe that I could do any of it, so we’ve just been fighting all morning and he wouldn’t let me in the car before,” Petito said in the body camera footage.

So I’ve been building my website. I’ve been really stressed and he doesn’t really believe that I could do any of it.

YouTubers like Petito documenting their lives on the road have soared in popularity in recent years, with channels like “Kombi Life” and “Max & Lee” attracting more than a half-million subscribers each.

In a cruel twist, it was another van life couple who were instrumental in identifying the location of Petito’s remains.

The family was editing footage for their “Red White & Bethune” channel when they saw Petito’s van in the Spread Creek Dispersed Camping Area of Grand Teton National Park on Aug. 27.

“I am so sad that we couldn’t bring her back alive, but to be able to bring her back home to her family or to help with that is everything,” Jenn Bethune told “Fox & Friends” last month. “It is so heartwarming that everything fell in place in order to make that happen.”

Laundrie is currently wanted on alleged debit card fraud charges and has been named a person of interest in Petito’s disappearance and death.

His parents last saw him on Sept. 13, a day earlier than they previously thought, according to their attorney.