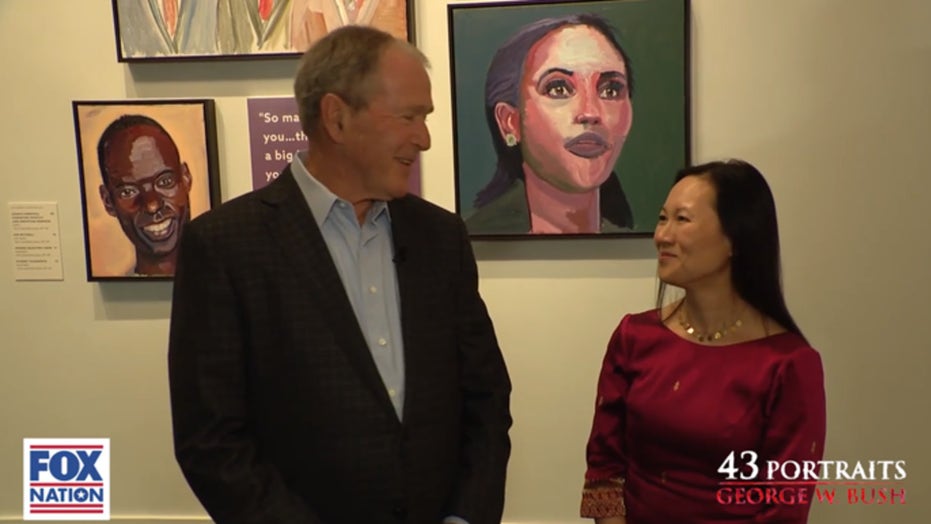 In the time since he has left the White House, former President George W. Bush has refrained from wading into political and policy debates. But his most recent collection of paintings, “Out of Many, One: Portraits of America’s Immigrants” and the accompanying book does just that in a very unique way.

Immigration was one of the most contentious issues Bush faced during his presidency, and the debate still rages today. The former President has always cared about the issue of immigration, but using a paintbrush to make a statement came after his Presidency.

“When most people hear the name George W. Bush, they think of his eight years as President of the United States,” said Fox News’ Dana Perino in the new Fox Nation special “43 Portraits: George W. Bush.” “But he’s been busy in his post-presidential years as well – writing books, working on important policy issues at the George W. Bush Presidential Center, and painting. A lot of painting.”

Perino visited the former president’s collection at the George W. Bush Presidential Center and discussed the issue of immigration with Bush and several of the immigrants he painted.

“The 43rd president’s powerful new collection of oil paintings highlights the inspiring journeys of 43 remarkable men and women who have immigrated to the United States,” she said in the Fox Nation special.

Often, the immigration debate takes place through facts and figures, but Bush’s portrait collection works to humanize the numbers.

“There’s a lot of statistics around immigration,” said Perino. “But here you are reminded that they are also people.”

One such immigrant was Thear Suzuki, who spent the first eight years of her life in Cambodia in war and refugee camps. She tells a harrowing tale of her family’s survival of genocide, working in forced labor, finally escaping to a refugee camp in Vietnam, and coming to the United States as a refugee.

Suzuki entered the third grade knowing no English and with no formal education; although her teacher flunked her that year, he helped her family with tasks like doing their taxes, and she credits him with helping their family succeed in America.

This was a trend Perino noted throughout Bush’s book: organizations – often faith-based – that stepped in and helped immigrants assimilate into American culture, teaching them simple things like how to get to the dentist.

With stories like Suzuki’s, Bush said his collection is an attempt to change the tone of the debate around immigration, but noted that solving the problem won’t be short-term.

In the meantime, while politicians and pundits debate how to solve a problem that has touched so many, Bush’s paintings celebrate the immigrants’ pursuit of the American dream. It “reminds people that how others live should make us feel grateful,” he said.

Fox Nation programs are viewable on-demand and from your mobile device app, but only for Fox Nation subscribers. Go to Fox Nation to start a free trial and watch the extensive library from your favorite Fox News personalities.