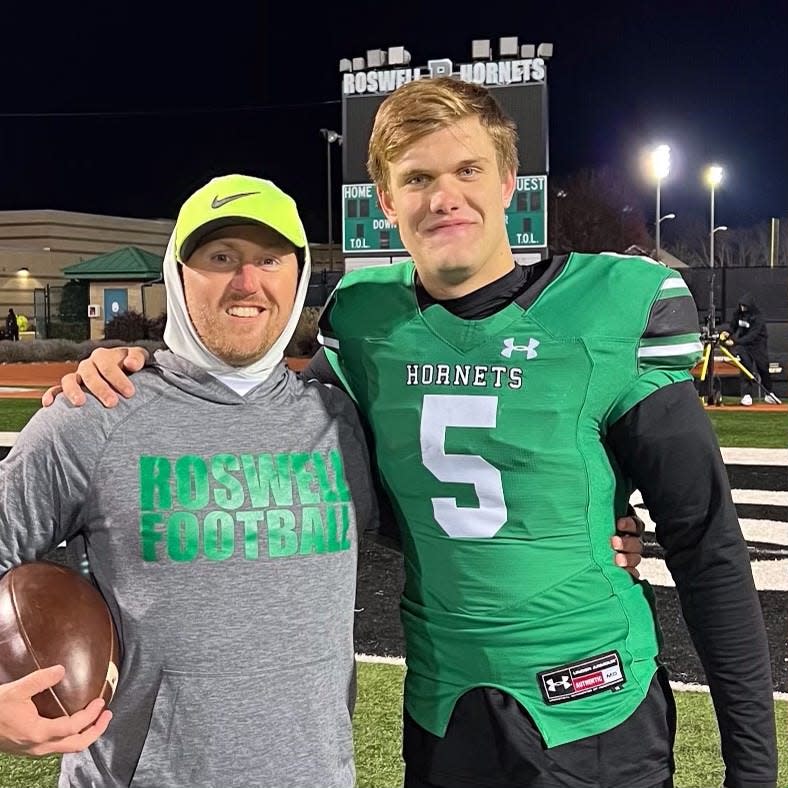 The death of Robbie Roper, a high school quarterback from Georgia who had multiple college scholarship offers and a 3.9 grade point average when he was buried in December, was more than a tragedy.

For most people, it also has been a mystery.

How did Roper, who at 6-4 and 210 pounds appeared to be in excellent health as a senior at Roswell High School, die at the age of 18?

At the funeral, Robbie’s father, James, told the mourners that Robbie did not kill himself and did not die from drug use. James Roper also had denied published reports that Robbie died from complications following shoulder surgery, but he provided no further information for the public.

“I just wanted him remembered as a perfect kid," James Roper said, his voice cracking with emotion when asked why he has waited to publicly identify the cause of death. “I just didn’t want anybody thinking that he had some abnormality when they thought about him."

The disorder can be triggered in adulthood by corticosteroids, an anti-inflammatory medication. Or it can be set off by a surgical procedure – fasting beforehand, anesthesia and the physical trauma – said Patrick Moore, an attorney who is representing the Roper family. Robbie had shoulder surgery Dec. 14.

“It’s treatable, is the point, and I think that’s why parents want folks to know,'' Moore said.

Robbie died Dec. 22 at UF Health Shands Hospital in Gainesville, Florida. James Roper said the family was previously unaware Robbie had the disorder until it was diagnosed by doctors at Shands Hospital.

The weekend before Robbie’s death, he traveled from his family’s home, Georgia to St. Augustine, Florida – about 75 miles from Gainesville – for a family reunion, according to James Roper.

'You don’t rush to the hospital just for throwing up'

“He was fine,’’ James Roper said. “He was on the beach, laughing and carrying on and having a good time on Saturday. And then Sunday he started throwing up, and we just thought he had a stomach flu or something.

“You know, you don’t rush to the hospital just for throwing up.’’

On Monday morning, when Robbie’s condition had worsened, his mother took him to an urgent-care center, where they were told Robbie needed to be treated at a hospital, according to James Roper.

James Roper said Robbie was cared for at two hospitals and the medical staff at the first said they thought Robbie had taken drugs despite the family’s insistence that Robbie did not use drugs.

“The whole time he’s there they’re saying that he’s on drugs,’’ said James Roper, who declined to identify the hospital by name. “And so they did tests and drugs weren’t showing up because he wasn’t a drug user of a kid.

“We called all of his friends and asked what did he use, and all of them said they'd never seen Robbie touch a drug. I mean, the kid was a straight arrow, 3.9 GPA. All the kid wanted to do all his life everyday was play football and play Xbox. He never really hung out with friends and went to parties and all that. He was just a real quiet kid.’’

Tests showed Robbie’s ammonia level was four times higher than normal and Robbie’s mother told the medical team that her father had been in the same hospital a year ago for elevated ammonia levels, James Roper said.

But the focus remained on possible drug use before the hospital had Robbie Roper airlifted to Shands Hospital, where Roper said his son was diagnosed with urea cycle disorder. OTC, the specific urea cycle disorder Robbie had, is passed on by one’s mother.

James Roper said Robbie’s mother, Jennifer, and sister, Bre, were hesitant to talk for the story and neither responded to requests for comment.

Robbie underwent dialysis, but James Roper said it was too late because the medical team at the first hospital focused so intently on the assumption Robbie had taken drugs.

“If they would have been more aggressive in putting him on dialysis, he’d probably still be alive,’’ James Roper said.

On Dec. 21, Robbie was put on life support, according to James Roper, who said he then called the father of Robbie’s girlfriend, Annie Bowers, a cheerleader at Roswell High School with the update. Annie and her parents flew down that same day, said Annie’s father, Johnny Bowers.

On the morning of Dec. 22, Annie was holding Robbie’s hand when they removed him from life support, according to her father.

“They didn’t start dating until September,’’ Johnny Bowers said, adding that Robbie was Annie’s first serious boyfriend. “They were together for a very short period of time. But they were together around the clock.’’

As news of Robbie’s death spread, it sent a shudder through the world of football. He had captured the attention of fans and coaches with his unlikely story.

Entering his senior year at Roswell High School, Robbie had zero scholarship offers. Then came the 2021 season, when Roper led Roswell High to a 10-3 record and final top-10 ranking in Georgia's Class 7A.

He passed for 3,010 yards and 37 touchdowns despite tearing the labrum in his non-throwing shoulder early in the season. He had shoulder surgery in Atlanta eight days before he headed to Florida for the family reunion.

'He was extremely excited'

By that point, he had scholarship offers from Massachusetts, Morehead State, Morgan State and Western Carolina. But what left Robbie more excited, James Roper said, was a phone call with Ole Miss head coach Lane Kiffin and a text message from Florida coach Billy Napier expressing their interest in Robbie.

“He called me while he was still in the hospital and left us wishes and everything and said he had texted Robbie the day before,’’ Roper said.

“Coach Napier never met Robbie,’’ Hurtado said. “However, he was extremely sorry to hear about Robbie’s passing, so he decided to call his dad to offer his condolences.’’

Brad Sheffield, director of communications for football at Ole Miss, said Kiffin had offered Robbie a preferred walk-on spot, guaranteeing him a place on the roster and a chance to earn a scholarship the following year.

The chance to play for Ole Miss had special appeal because Robbie’s sister, Bre, plays softball at the school. After Robbie’s death, she changed her jersey from No. 21 to No. 5, the number Robbie wore at Roswell.

Bre, a graduate student, has started all 51 games and hit four home runs this season. After each homer, she paid tribute to her brother by circling the bases with five fingers from each hand held high.

At home plate, Bre’s teammates greeted her with the same five-finger salute.

There have been other tributes.

James Roper said he wants his son to be remembered as more than a football player and recounted a story Robbie’s personal trainer told at the funeral.

“So he was so much more than a football player,’’ James Roper said. “He was so smart, athletic and kind.

This article originally appeared on USA TODAY: Georgia HS QB Robbie Roper's death at 18 was a mystery — until now.