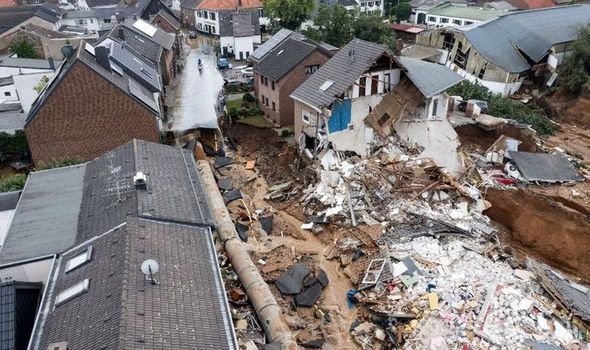 Record rainfall in western Europe has caused major rivers to burst their banks in west Germany resulting in the worst flooding in decades. Belgium, Luxembourg, Switzerland and the Netherlands have also been affected by the freak weather. Belgian media is reporting 22 deaths there.

“It was so terrible, we couldn’t help anyone.

“People were waving out of their windows,” said Frank Thel, a resident of one of the worst affected areas.

An estimated 114,000 homes are now without power in the region and the village of Schuld is reported to be almost entirely destroyed as water levels continue to rise.

Several more people died in a landslide when the ground collapsed into a nearby gravel pit in the town of Blessem, near Cologne.

German Chancellor Angela Merkel said: “My empathy and my heart goes out to all of those who in this catastrophe lost their loved ones, or who are still worrying about the fate of people still missing.”

“I fear we will only see the full extent of this tragedy in the coming days,” she added from Washington where she is visiting President Joe Biden.

Mrs Merkel promised that she was in communication with the finance minister to arrange long-term aid to those affected but stressed the current aim was rescue and immediate response.

Mrs Merkel will stand down as Chancellor in October after almost 26 years in the role.

Her potential successor, Armin Laschet, the premier of the affected area, has blamed the climate crisis for the tragedy.

German president Frank-Walter Steinmeier has said he is “stunned” by the devastation caused by freak flooding in Germany.

The president has pledged his support to those affected and has insisted on “determined” action on climate change.

“The water is receding. The full extent of the disaster is only now becoming clear,” the president said.

“Perhaps, in a few days’ time, the terrible pictures of the flooding will not dominate the news – but that is exactly when people in the flooded areas will most need our continued support.

“We must not disappoint them,” he added.

12 people have died in an assisted living facility for the disabled in the Rhineland-Palatinate state of Germany.

As water swept into the building, staff were unable to get all of the residents to safety.

Only one of the 13 missing people was found alive.