The 63-year-old’s government takes office with the aim of modernising the European Union‘s most populous country, as well as combatting climate change.

However, it faces the immediate challenge of handling the coronavirus pandemic – which the nation is currently grappling with amid high cases and low vaccination rates.

His centre-left Social Democrats (SPD) emerged as the largest party in September’s general election before negotiating a coalition deal with the environmentalist Greens and the neoliberal Free Democratic Party (FDP). 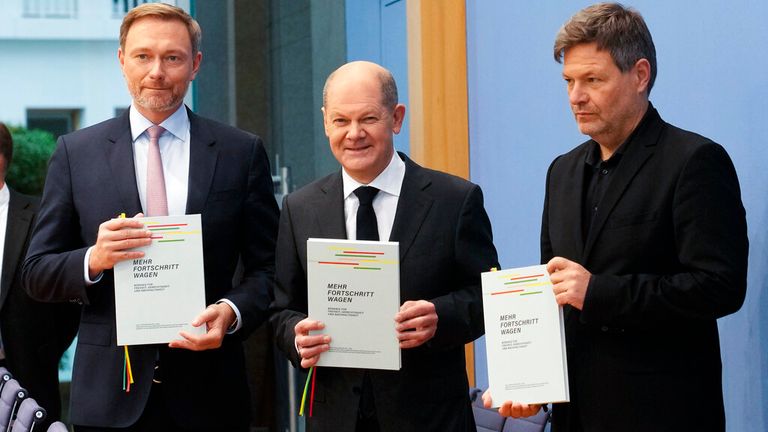 The unlikely alliance, which is the first such grouping at a national level, brings to an end 16 years of conservative-led government under Ms Merkel, who did not stand for a fifth term in the election.

Members of the Bundestag lower house of parliament voted for Mr Scholz to become the nation’s new head of government.

Leading members of all three parties signed the 177-page coalition agreement in front of the media under the logo “Dare More Progress”.

Mr Scholz, who served as vice chancellor and finance minister in Merkel’s government, said: “This should be a morning for a new start.”

His first EU summit will be held just a week after he is sworn in, with leaders of the 27-nation bloc due to meet in Brussels on 16 and 17 December.

Efforts to combat climate change are a top priority for the new government – especially the Greens.

They also hope to modernise Europe’s biggest economy and introduce more liberal social policies, as well as strengthen the EU.

But their top priority is facing the immediate task of slowing down the near-record COVID-19 infection rates.

FDP leader Christian Lindner told reporters that the last few weeks had involved discussions and now it was time for action.

“From this week we want to work on making progress. We are under no illusion, we face big challenges,” he said. The new three-party government also has hopes of working with democracies around the world, with Mr Scholz praising US President Joe Biden for strengthening a community of democratic countries.

“It is now clear what binds us together,” Mr Scholz told reporters at a news conference on Tuesday.

He said the new government wants to “continue the efforts Germany has made in recent years to create a strong, sovereign European Union,” adding: “At the same time, we will underline the trans-Atlantic partnership and our cooperation in NATO.”

He avoided questions on whether Germany would join a diplomatic boycott of the 2022 Beijing Winter Olympics, telling reporters: “(We) must know our differences and nevertheless get on with each other.”

Ms Merkel, Germany’s first-ever female chancellor, has been credited with raising the country’s profile and influence, as well as working to hold a fractious EU together.

The 67-year-old, a former scientist who grew up in communist East Germany, left the role as chancellor a week short of the record for longevity held by her one-time mentor, Helmut Kohl, who reunited Germany during his 1982-1998 tenure.