A family of orangutans, brawling grizzly bears and a meteor in the sand: Mother nature is captured in all its glory in top global photography contest

Wild rabbits leaping into the air, a salamander swimming through a gurgling brook and praying mantises flashing their wings were all selected as winners in the annual Glanzlichter photo contest.

Amateurs and professionals from 40 countries put their best shots to the test by entering them into eight nature-themed categories, which were then considered for four days by judges.

A brown bear studying a tiny great tit bird in Slovenia came top in the nature competition, after photographer Michaela Walch spent five hours waiting in a hide to capture the iconic moment.

Alexandra Wuensch, from Germany, came first in The Beauty of Plants section for a stunning photo of an amber tree losing its colourful leaves in the snow in Duesseldorf.

A colourful picture of a meteor taken on the black sands of the Canary Islands came top in the Nature as Art section and was snapped by Radomir Jakubowski, from Germany.

Heinz Buls, from Germany, took a photo of a bird landing on a toadstool on an Autumn morning to score first place in the Artists on Wings category.

Whilst a wonderful picture of wild rabbits leaping in the air, entitled War and Peace, came first in the World of Mammals section and was taken by Csaba Daroczi, from Hungary.

A close-up of a salamander entitled, Small Dragon, helped Egor Nikiforov, from Russia, won first place in the Diversity of all other Animals category.

Other winning pictures show giraffes in Kenya, European mantis insects balancing on a twig and the morning sun beams over the countryside in Hungary.

Each victor received a price of between €2,500 and €500, and their photos will now go on to be exhibited in galleries, museums and parks in Germany and Italy for the next two years. 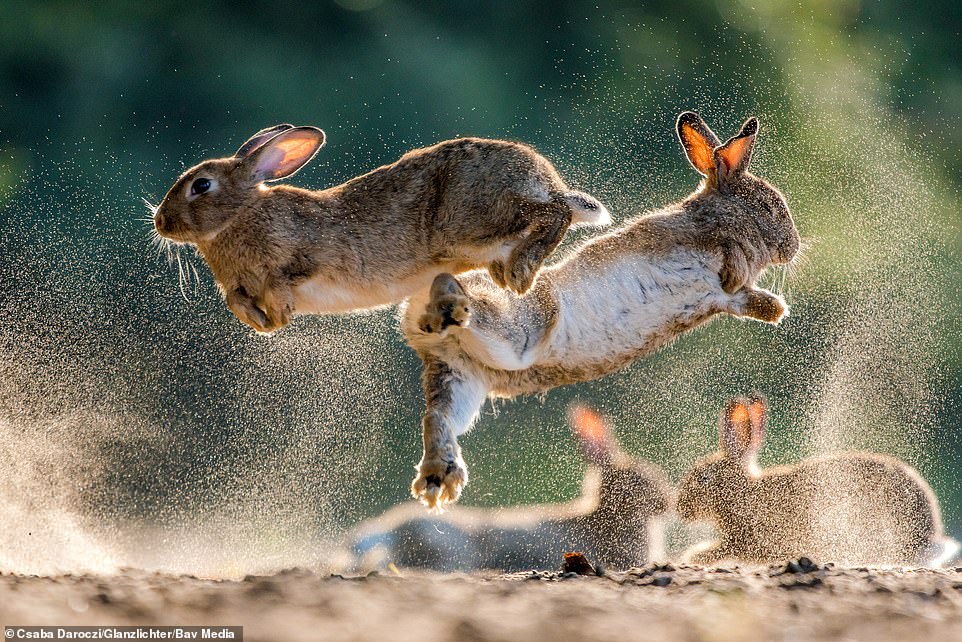 Adorable wild rabbits were snapped leaping into the air by photographer Csaba Daroczi from Hungary. This stunning picture came first in the World Mammals photographs section 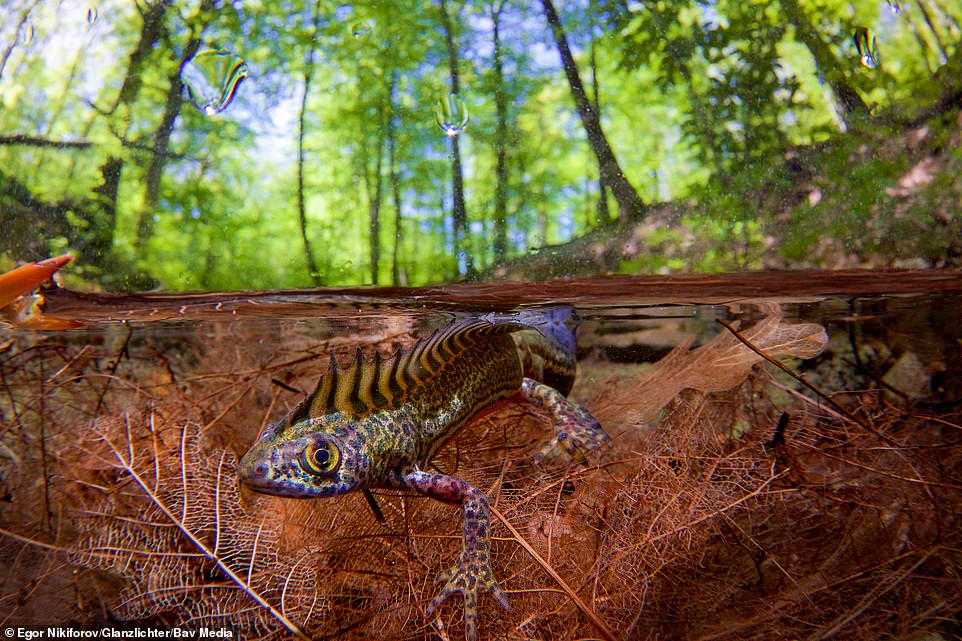 A rainbow-coloured salamander calmly swimming through a gurgling brook in a Russian forest. It was taken by photographer Egor Nikiforov and won first place in the Diversity of all other Animals category 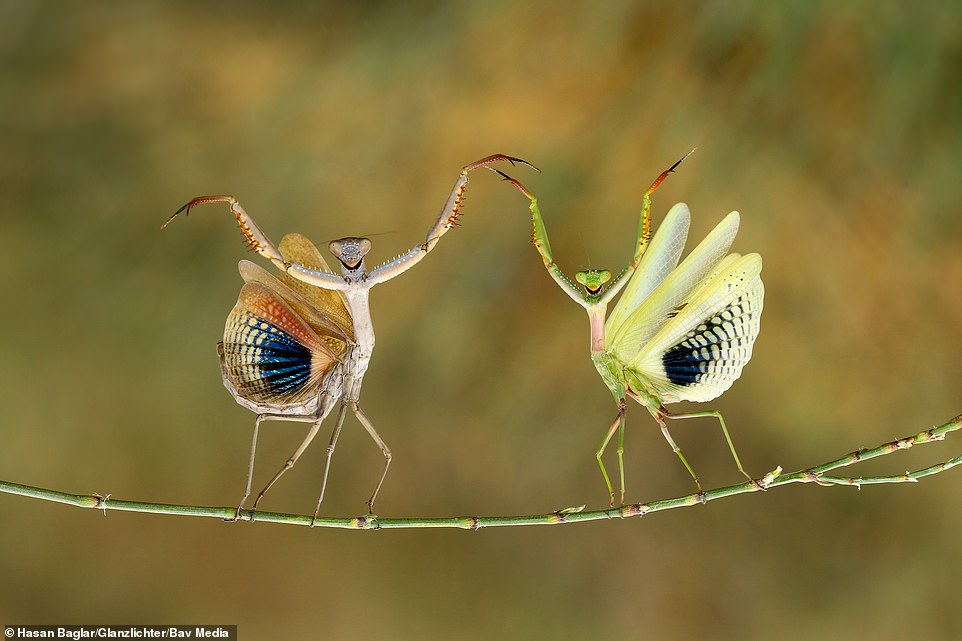 Two adult European praying mantises spread their arms and wings in a colourful threat display in Cyprus. This picture, which came first in the Moments in Nature category, was taken by Hasan Baglar 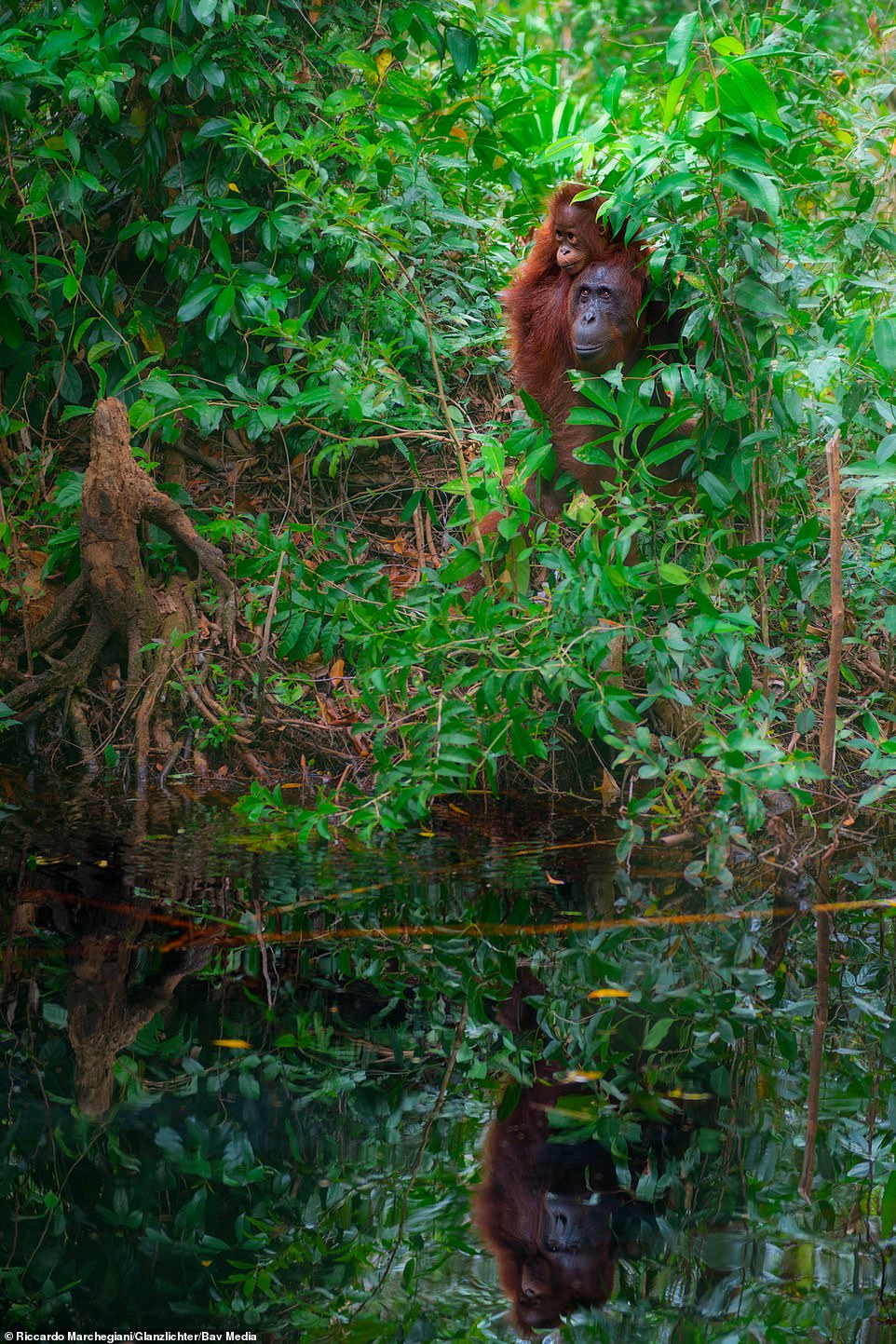 A mother Orangutan tentatively peers round the corner to check that the coast is clear in Borneo, while her baby gingerly clings on to her back in Borneo. Their faces were also reflected in the water’s surface. Taken by 17-year-old Italian Riccardo Marchegiani, this picture won the Junior Award 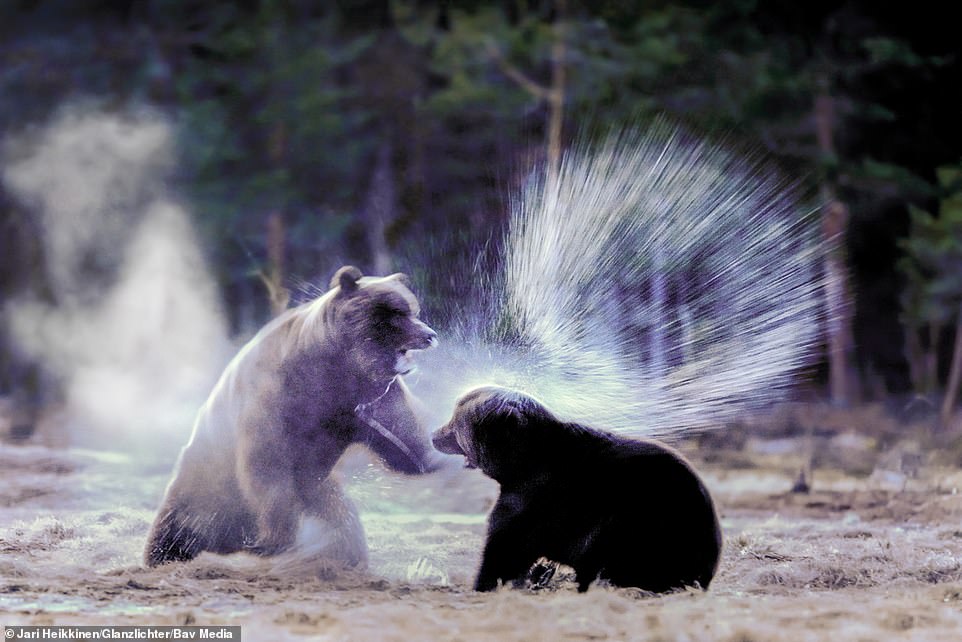 Two brown bears were snapped having a major disagreement in Finland by photographer Jari Heikkinen, who has been taking stunning pictures of nature for 40 years. This won the Fritz Poelking Award 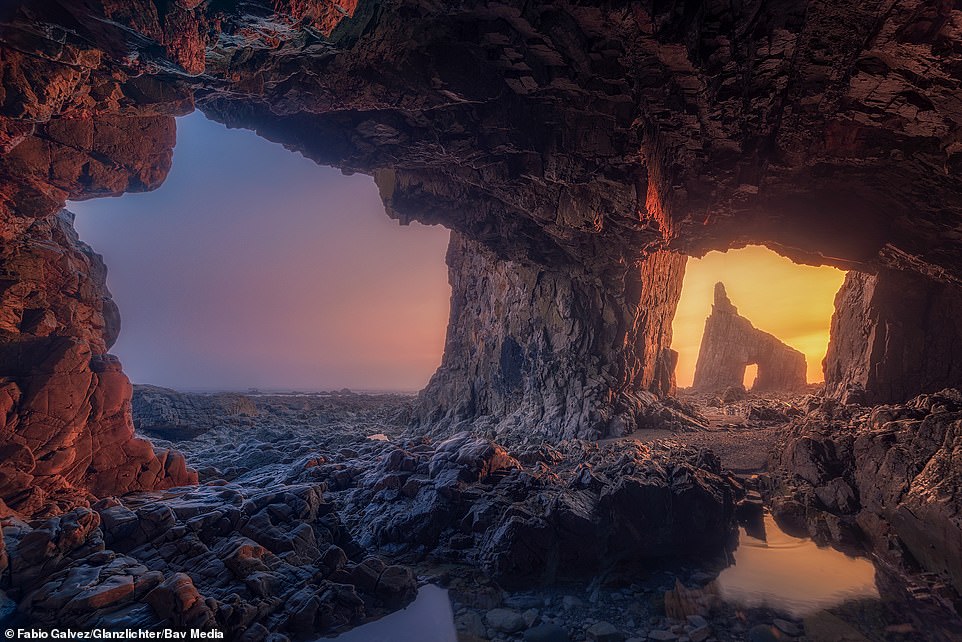 A stunning picture of rock-covered Campiecho beach in Asturias, Spain, at low tide. By Fabio Galvez, this picture came top of the Magnificent Wilderness category 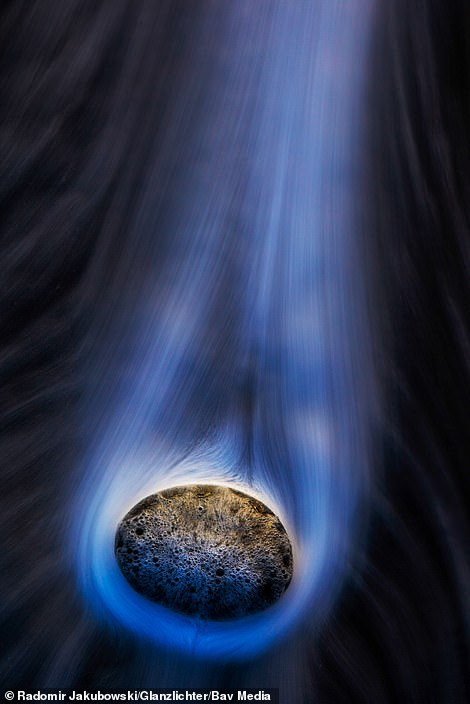 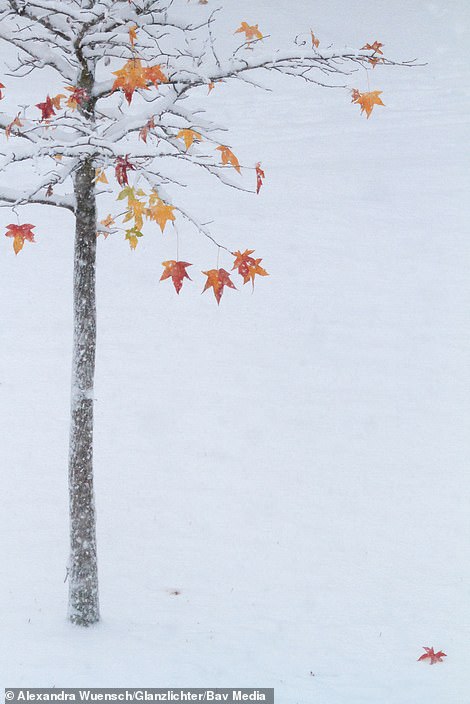 A meteor pictured on the black sands of a volcanic beach in the Canary Islands (left) and an amber tree shedding its red leaves during winter in Dusseldorf, Germany (right) 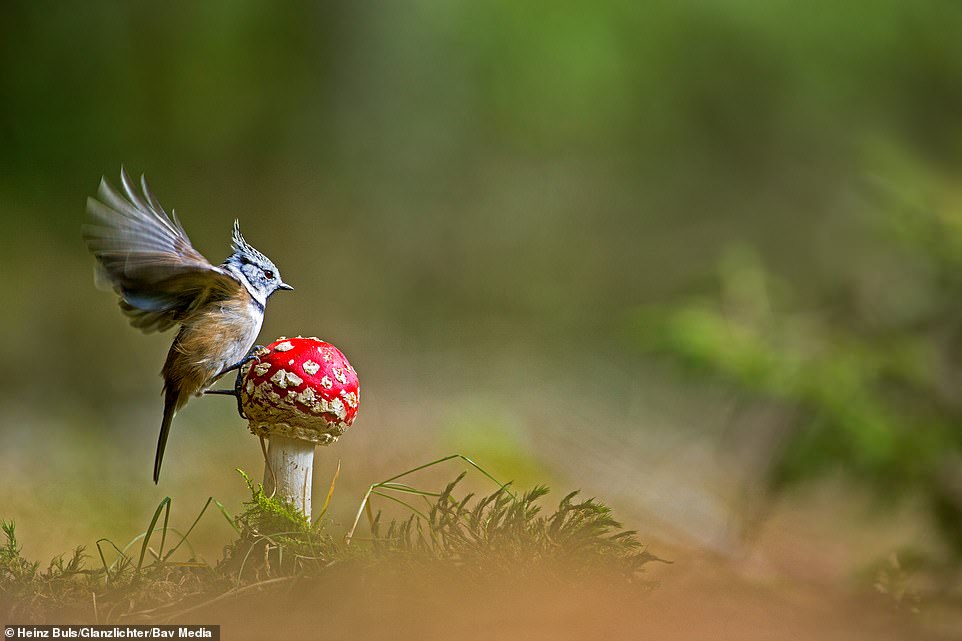 A small bird, possibly a blue tit, pictured landing on a toadstool in an Autumnal German forest. By Heinz Buls, this image won first prize for the Artists on Wings category 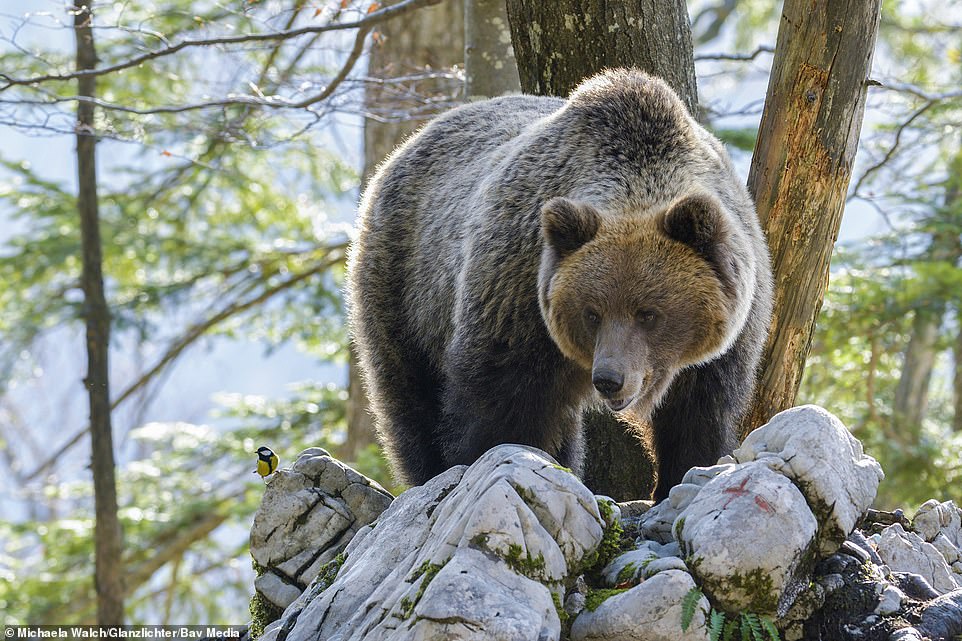 A large brown bear eyes up a great tit as it lumbers through the wild forests of Slovenia. This was taken by Michaela Walch 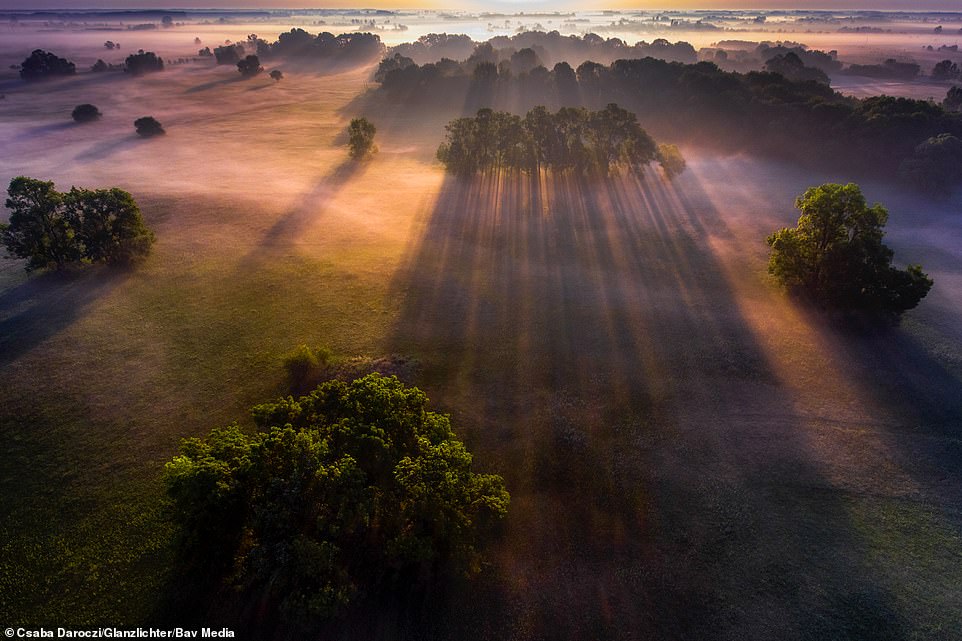 Sun beams are pictured here striking the landscape in the early morning causing the shadows of trees to stretch across the misty Hungarian countryside. It was taken by Csaba Daroczi in Bacs-Kiskun, south Hungary 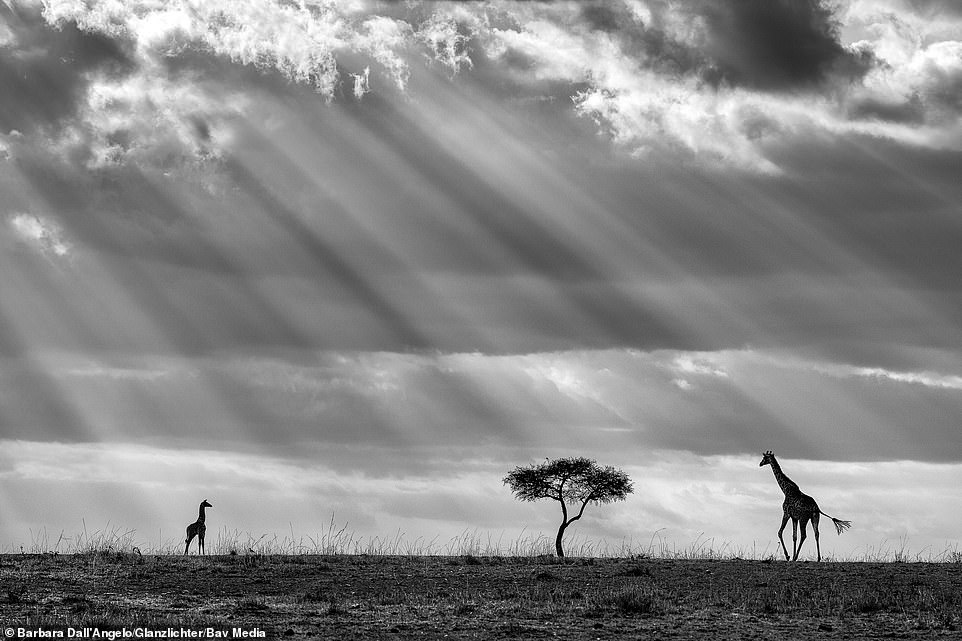 This picture of two giraffes on the Kenyan savanna came first in the Black and White section. It was taken by Barbara Dall’Angelo