Another energy firm goes bust: Goto Energy with 22,000 customers is 13th supplier to cease trading since start of September after spike in gas prices

Goto Energy has become the latest in an ever-growing list of energy suppliers to go out of business since the start of September amid a massive spike in gas prices.

The company, which supplies around 22,000 households in the UK, ceased to trade on Monday, regulator Ofgem announced.

These customers will be protected by Ofgem’s Supplier of Last Resort scheme, which will ensure they are assigned a new supplier and will not have their supply interrupted.

Around two million customers have seen their energy supplier go bust in the last seven weeks.

Only last week Daligas, Pure Planet and Colorado Energy all ceased trading within 24 hours of each other. 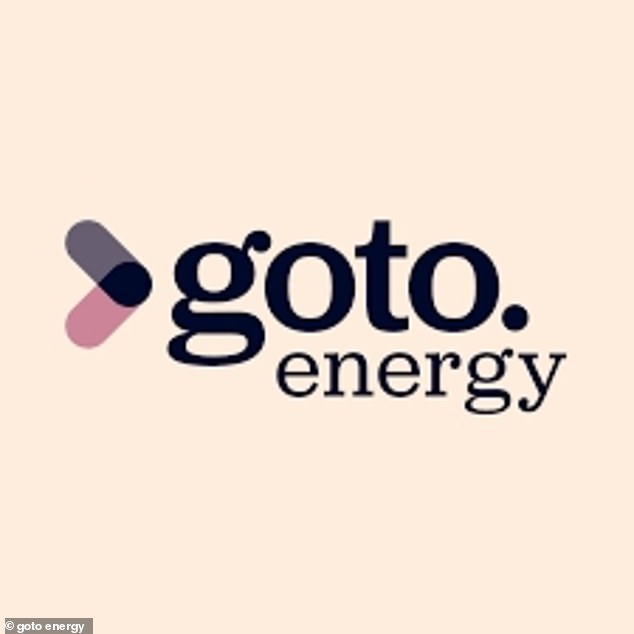 Goto Energy becomes the latest firm in a growing list of energy suppliers who have gone bust amid a massive spike in gas prices, leaving 22,000 more homes having to switch supplier 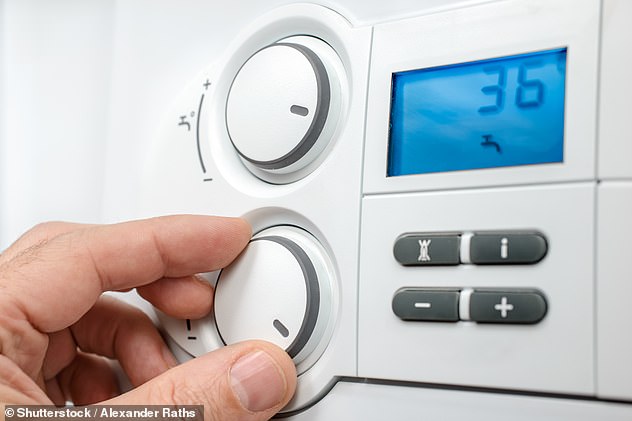 Between them they served more than 250,000 customers.

The 13 failures since the start of September have come as global gas prices rocket at unprecedented rates.

It means that suppliers have had to pay much more than expected to buy gas to pump to households which has in turn squeezed their finances.

On its website Goto said: ‘Goto Energy is ceasing to trade. Ofgem, the energy regulator, is appointing a new supplier for its customers.

‘Customers need not worry, their supplies are secure and funds that domestic customers have paid into their accounts will be protected if they are in credit.

‘Ofgem’s advice is not to switch, but to wait until they appoint a new supplier for you. 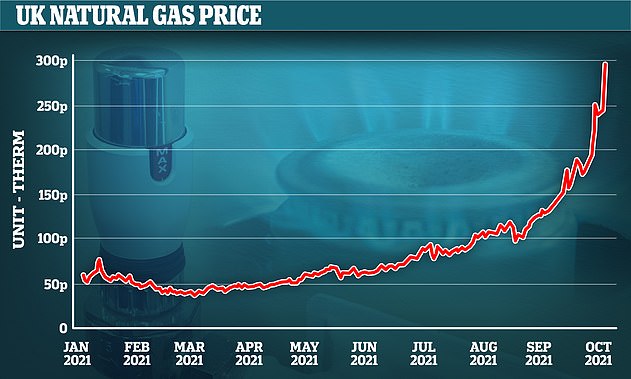 ‘This will help make sure that the process of handing customers over to a new supplier, and honouring domestic customers’ credit balances, is as hassle free as possible for customers.’

Ofgem said that customers should take a meter reading so they are ready when their new supplier gets in touch.

‘We know this is a worrying time for many people and news of a supplier going out of business can be unsettling.

‘I want to reassure affected customers that they do not need to worry: under our safety net we’ll make sure your energy supplies continue.

‘If you have credit on your account the funds you have paid in are protected and you will not lose the money that is owed to you.

Which energy suppliers have gone bust so far?

‘Ofgem will choose a new supplier for you and while we are doing this our advice is to wait until we appoint a new supplier and do not switch in the meantime.

‘You can rely on your energy supply as normal.

‘We will update you when we have chosen a new supplier, who will then get in touch about your tariff.

‘Any customer concerned about paying their energy bill should contact their supplier to access the range of support that is available.’

Wholesale gas prices have soared in recent months as economies reopen from COVID-19 lockdowns and high demand for liquefied natural gas in Asia pushed down supplies to Europe.

Households attached to collapsed companies will be placed into a rescue regime which will involve Ofgem searching for a new supplier to take them on.

While there is no risk that their gas or electricity supplies will be cut off, they will be switched to tariffs which are likely to be around £400 a year higher.

Under the ‘supplier of last resort’ system, outstanding credit balances owed to existing and former customers will be paid and householders transferred will be protected by the energy price cap.

But customers who were on cheaper fixed price deals, signed before the gas price rise, were warned that bills could jump by hundreds of pounds.

And now, with the annual price cap set to rise to £1,277 from October for a typical household, British Gas and EDF Energy are among the suppliers set to charge customers the top rate.

So more than 2million homes have been abandoned by energy companies which have already collapsed and thousands more could be plunged into the same position if four more companies fold this week. 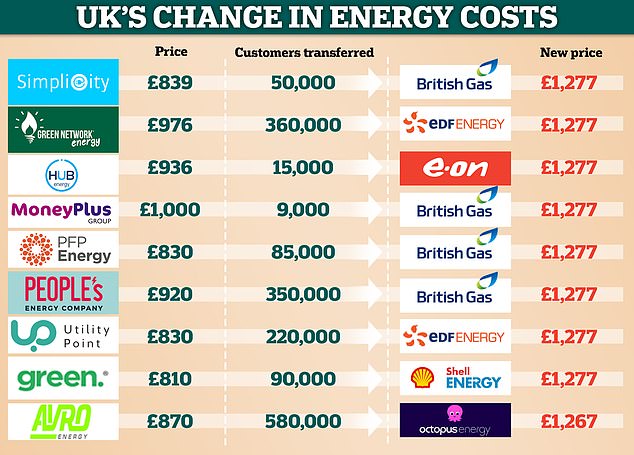 Earlier this month, more than 230,000 households have been moved to E.on Next after the energy supplier picked up the pieces from three failed rivals in the sector.

Regulator Ofgem said it had appointed E.on Next to take on customers who were once on the books of Enstroga, Igloo Energy and Symbio Energy.

Between them the three companies had 233,000 customers.

They will all be switched over by E.on, and can continue to use their gas and electricity as before.

The list of collapsed firms has included some tiny suppliers, such as MoneyPlus Energy and Enstroga, who had just 15,000 customers between them, but also larger players like Avro, which supplied 580,000.

Energy firms accepting new customers from the failed suppliers have been given assurances that they will be able to recoup any costs and losses they suffer as a result.

This process will allow them to claim back the money through levies that will be applied to all customer bills and could run to more than £1billion.

The Business Secretary, Kwasi Kwarteng, has repeatedly stated the government has no intention of propping up or offering financial support to failed energy firms.

How are suppliers of last resort determined?

When an energy supplier collapses, its customers are transferred to another firm, known as a supplier of last resort.

Under the ‘supplier of last resort’ system, outstanding credit balances owed to existing and former customers will be paid and householders transferred will be protected by the energy price cap.

SOLR are determined through a bidding process, where Ofgem selects the most apporpriate supplier to take in the customers of a collapsed firm.

Several factors are considered when appointing an SOLR.

They include timing and supplier size, which means larger suppliers may have to step in if a collapsed firm has a lot of customers.

Supplier systems are also considered, with those similar to the collapsed one given an advantage.

Customer time is another factor, for example suppliers with business clients may be more able to take on similar customers.

Finally, and this is more dependant on the fallen supplier, Ofgem will need up-to-date information on customers. More information means it’ll be easier to determine which supplier takes over.