The great white shark was filmed appearing out of the murky blue shadows during a diving trip in Port Lincoln, Australia.

Haunting footage shows the moment the shark – supposedly six metres long – masked itself in the crowd of similarly-coloured fish before swimming alongside the filming diver.

Fortunately, the cameraman was safely protected by a diving cage.

The great white slowly circled past the cage while checking out the divers inside.

Once it had swum a lap, the ocean predator descended into the shadowy depths where it disappeared out of sight.

The great white’s dorsal fin was bizarrely curled over – typically taken as a sign of having been kept in captivity.

As a result, captive sharks often display signs of aggressive body language such as their fins being down and their back’s arched.

Since being uploaded online by Reddit user shark_nightmare only days ago, scores of people have commented on the sighting.

The clip was captioned: “A couple of days ago I got to live my dream of swimming with a great white shark, my favourite animal. 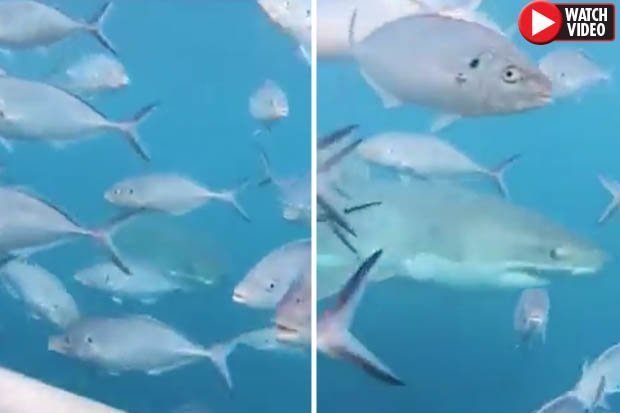 “This one was six meters long and came up and bit the cage.”

One person said: “Wow, I’m always amazed at the grace they have.”

Another said: “One day I hope to do the same, this is awesome.”

It is not the first time a great white’s sudden appearance has hit the headlines.

Last week, one fisherman had the fright of its life when a great white appeared out of the shadows.