Prince Harry and Meghan, the Duchess of Sussex, have released a rare photo showing their daughter Lilibet who celebrated her first birthday in a backyard picnic in the UK over the weekend.

Wearing a light blue frock and white bow on her head, the red-haired toddler sat on the grass in a candid snapshot taken by close family friend Misan Harriman on Saturday, a spokesperson said.

A highlight of the intimate gathering at Frogmore Cottage in Windsor was a cake by American baker Claire Ptak, who created the wedding cake for the Duke and Duchess of Sussex in 2018.

Lilibet Diana Mountbatten-Windsor was named in honour of Queen Elizabeth II, whose family nickname is Lilibet.

Harry and Meghan, who live in the United States, were in Britain for the Queen’s Platinum Jubilee celebrations. It is understood they took Lilibet, who was born in California, to meet her great-grandmother, the Queen, for the first time last week.

It’s also the first time Lilibet, whom the family calls Lili, has appeared in a photo on her own; she appeared in a Christmas card with her parents and older brother Archie last year.

Her parents are non-working royals and did not take part in the official jubilee parades, appearing in public only during the thanksgiving service, and without their children.

The Sussexes were also not on the Buckingham Palace balcony as Jubilee celebrations kicked off, but instead were seen only in a few photos, taken through a window at Horse Guards Parade during Trooping the Colour, showing them interacting with some of the royal children. 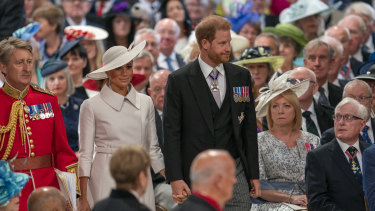 Prince Harry and Meghan attend the service of thanksgiving for the Queen in London on June 3.Credit:Getty