Head teacher, 59, wins standoff with travellers ‘who invaded the play fields at her £10,000-a-term Ashville College and demanded £5,000 to leave’

A headmistress at a prestigious public school stood firm when a group of ‘blackmailing’ travellers invaded their playing fields then demanded £5,000 to move on – refusing to pay them a penny.

Rhiannon Wilkinson, 59, who took charge at the £10,000 per term Ashville College in Harrogate only in April felt held to ransom by the demands of the group, who moved onto a rugby pitch on Tuesday evening in multiple vehicles and refused to leave when asked for the following two days.

They went on to demand £5,000 from the school’s funds if they were to leave the site – and staff feared they might caused damage to the playing fields or even school buildings.

A source at the school in Harrogate, North Yorkshire, said it was also implied that if they didn’t receive the money they would stay longer and other traveller groups would be invited to arrive to set up camp and make even more problems for the school. 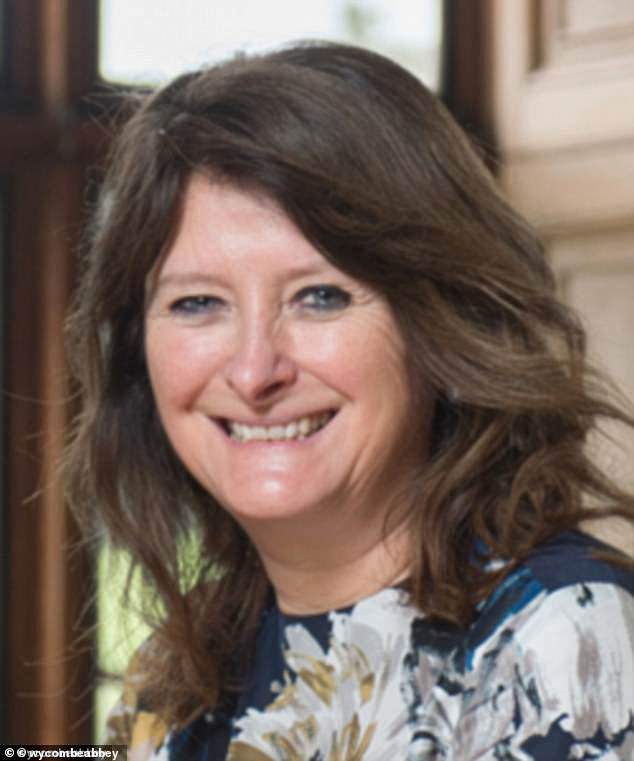 Headmistress Rhiannon Wilkinson, 59, (pictured) stood firm when travellers invaded rugby pitch at Ashville College in Harrogate and declined to pay the £5,000 to the group

But Mrs Wilkinson, first female head in the college’s 144 year history, refused to be intimidated and declined to offer any inducement to them to leave.

And today, Friday, she was able to signal that her hardline approach had brought victory as she alerted parents and governors that the travellers had given up on trying to get cash to leave and moved on without receiving a penny.

A member of staff said: ‘When we arrived this morning they had left overnight, which is a great relief.

‘It was a great relief as it did feel like there was an element of blackmailing when they asked for money to encourage them to leave.’ The prestigious public school felt held to ransom by the demands of the group, who moved onto their playing fields on Tuesday evening in multiple vehicles (pictured)

Local residents were also relieved at the news. One man walking his dog past the fields said: ‘There’s always a concern that they could bring disorder to the area. The school played it correctly, I’m glad they didn’t back down.’

Members of the group told college staff that they were en route to a wedding in Ireland after attending the annual Appleby Horse Fair in Cumbria.

The college – where boarding fees are as much as £10,000-per-term – was staging a series of summer sports activities for boys and girls, which had to be suspended amid safety concerns.

The college applied for a court order but were told it could take up to ten days and interrupt the start of the new term.

Police had been notified but were ‘powerless’ to act, the college said today in its emailed statement.

In a message sent to concerned parents, the college said: ‘We are pleased to report that after less than two days, the travellers that set up camp on our sports pitches have now vacated the grounds. But Mrs Wilkinson, first female head in the college’s 144 year history, refused to be intimidated and declined to offer any inducement to them to leave Police had been notified but were ‘powerless’ to act, as trespass is a civil offence and not a criminal offence and the encampment was on the private land of Ashville College

‘Our groundkeeping staff have conducted a thorough inspection of the rugby fields and can confirm that there is no damage, and that they are safe for games to be resumed.’

The college had been concerned about a protracted and costly legal battle after North Yorkshire police said they were powerless to act.

The college said on Wednesday: ‘Despite the travellers illegally camping on our grounds, which is private property, and their presence being a child safeguarding issue, the police state they are powerless to take action. This has already impacted on our summer sports camps and there’s a possibility the start of the new term may have to be delayed.

‘We are now having to engage the services of a solicitor to help us apply for a court order, and in the meantime we are powerless to do anything, which is incredibly frustrating and worrying.’ 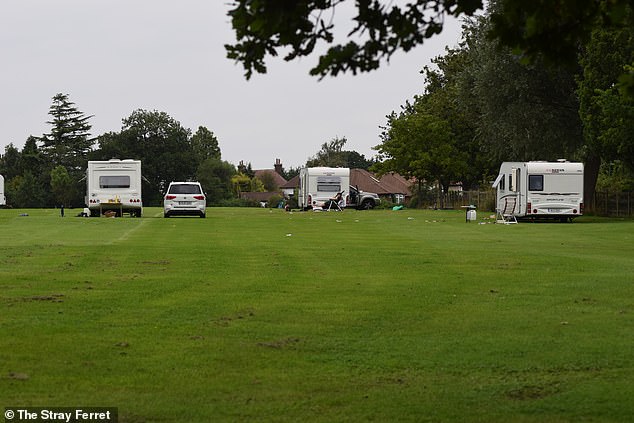 On Friday, the school confirmed the group – who were en route to a wedding in Ireland – had given up on trying to get cash to leave and moved on without receiving a penny

‘The issue is that trespass is a civil offence and not a criminal offence. So if the encampment is on private land such as Ashville College, it is the landowner’s responsibility unless there are other crimes being committed.’

Ashville College – motto ‘to be, rather than to seem’ – is a co-educational school for both day and boarding pupils between the ages of three to 18. Founded in 1877, it is the oldest independent school in Harrogate and owns a 60 acre estate in the spa town.