More than 230,000 small, white flags flutter in the wind as a moving testament to the American lives lost to COVID-19.

Each day, the seemingly endless sea of flags grows outside an abandoned stadium in Washington, D.C. The sight overwhelms the senses, breathtaking and heartbreaking at the same time.

Dr. Rick Bright, a top federal scientist who focused on vaccine development but later broke rank with the Trump administration and filed a whistleblower complaint, is among those who come to the memorial to plant the little white flags in memory of those who have died from COVID-19.

He adds the flag to the growing memorial, then takes a picture of it for their loved ones.

Bright is just one of the many who come here to contribute to the memorial, created by Washington artist Suzanne Firstenberg.

The atmosphere is reminiscent of a war cemetery. An elderly man lets out a deep sigh as he walks among the rows.

Most flags are blank but some have names, photos, dates of birth and death. One flag simply reads “Amelia Cole, Love Mom.” 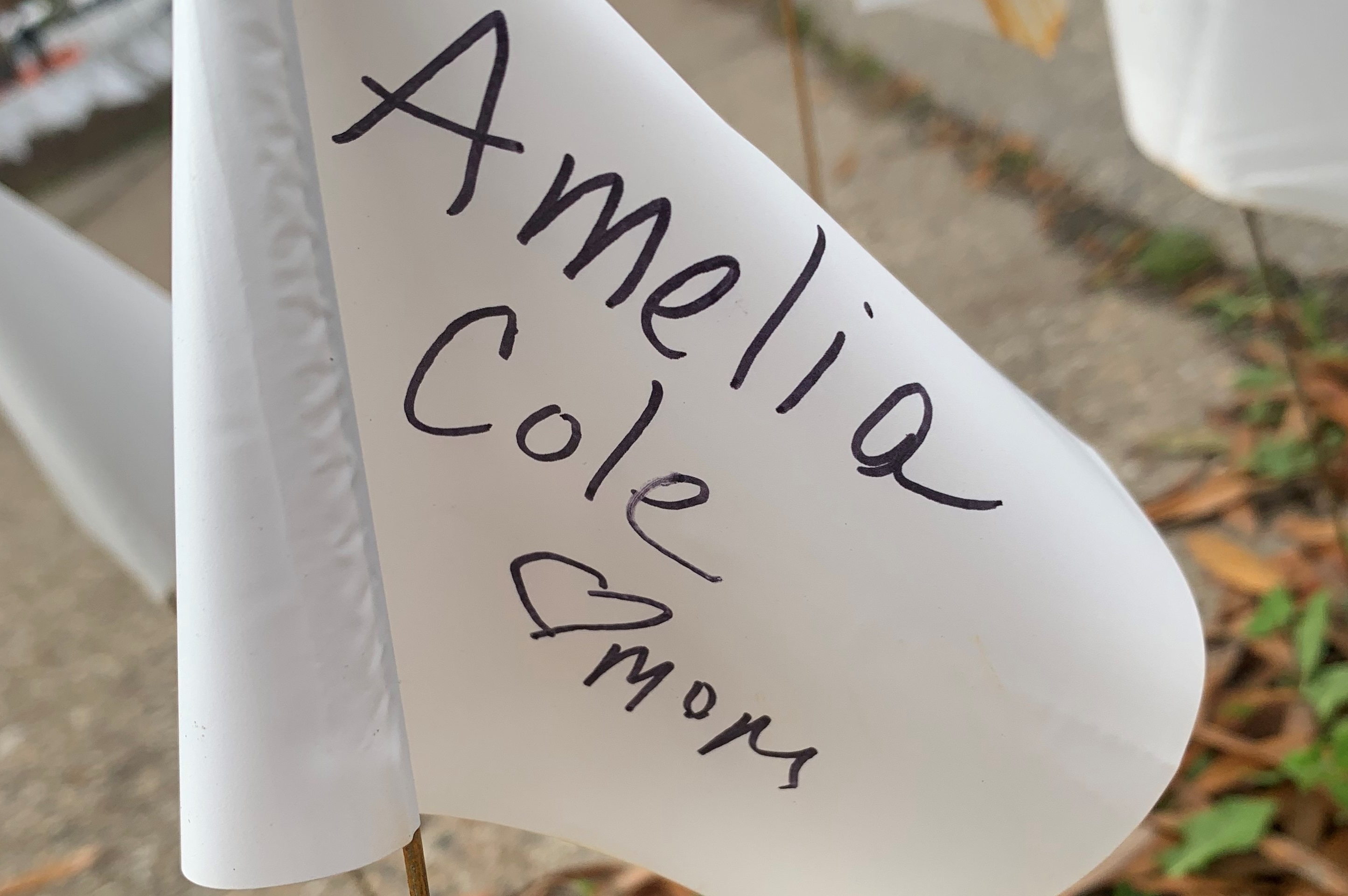 A woman in black sobs, the man beside her comforting her in his embrace. Her name is Christine Uncles. Both her parents caught COVID-19. Her mother recovered, her 69-year-old father died.

“It was just very overwhelming. I didn’t expect to see so many flags. I knew the number was high, but (to) see it was just absolutely disturbing and just so heartbreaking,” Uncles says. “It crushes me to know that there’s so many more out there. And my Dad was one of them.”

The people visiting here move solemnly under an immense display reading: “In America: How could this happen…”

“I purposely didn’t put a question mark,” says Firstenberg, the artist who created the memorial, referring to the words on the sign.

For her, the magnitude of the loss is matched by the failure of the U.S. leadership to stop it. She says she created the memorial to help people connect and grieve for the lives lost but also to reflect on countless thousands who could have been saved.

Among the unassuming mourners on this day is a man who risked his career to prevent this very outcome.

Early on in the pandemic, when he was still with the administration, Dr. Bright raised concerns about shortages of PPEs but says he was met with skepticism and surprise.

He also says White House officials blocked his efforts to roll out a more effective plan to better identify and test for the virus. President Donald Trump called Bright an “angry, disgruntled employee.” He was demoted and resigned.

“It’s shameful that we don’t have an American president right now who would come here and plant a flag and do something,” Bright says.

“Whenever I get a name on Twitter, I write it on a flag,” he says.

That morning he received a message from a woman in San Antonio who wanted her father’s name to be remembered. At 77 years old, Rudy G. Perez Sr. was still very active before succumbing to the virus. Bright read her message to us.

“It happened so fast, it is such a slap to hear Trump say all the media wants to talk about is COVID-19. I’ll never understand why the government didn’t come to the rescue of our relatives,” Perez says her message.

Bright will take a photo of the flag and send it back to the Perez family. It’s a small gesture that will go a long way in showing her father isn’t forgotten.

“We’re adding a thousand flags every single day while (Trump) is saying these people are virtual nobodies, while his son is saying the case counts are next to zero. Those are all lies to the American public.”

Yet Bright sees light at the end of the tunnel, believing the American people are far more resilient than their president.

“He’s given in and given up but American’s haven’t and we are not quitters. We need leaders who won’t quit on us.”