New weather charts warn temperatures are expected to plunge across the UK this weekend, as a system sweeps in this week. Combined with northerly winds, the bitterly-cold air will increase the risk of snowfall especially in the north but may also bring wintry hazards further south.

WXCharts’ snow depth models predict 3cm (1.2 inches) of snow as far south as Yorkshire – but much heavier snow is expected to land in Scotland.

Snow depth in the Scottish Highlands could reach as much as 45cm (17.7 inches) on January 24 – before rising to 66cm (26 inches) midway through the following week.

And temperatures will also plummet to as low as -10C by January 24 in northern Scotland, temperature models suggest.

Lows of -2C are expected to grip England and Wales throughout this weekend. 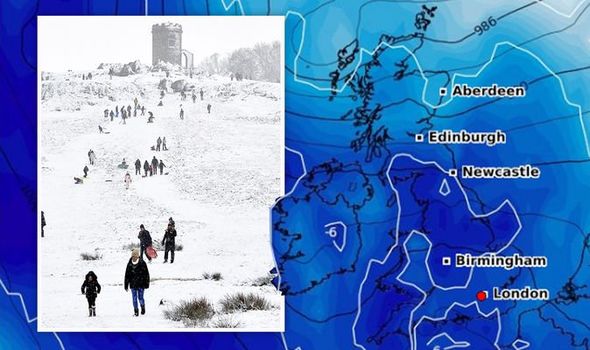 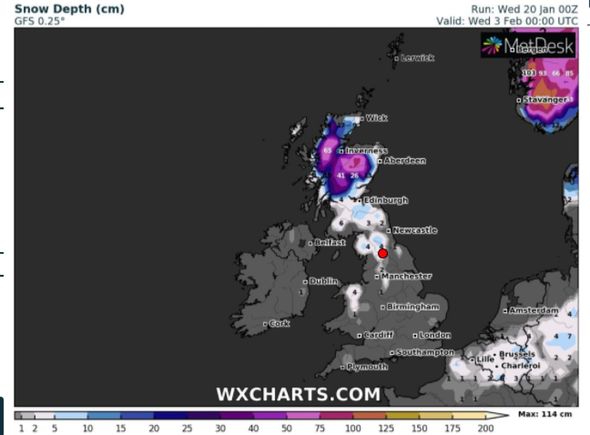 They added a “dynamic” system will mean it would be “likely to be rather cold in the north.”

And Jo Farrow at Netweather said: “By this evening and tonight, we will see the cold front part of the rain band digging down across Wales and England, the low centre deepens and in the trough, there will be a band of heavy rain and strong, gusty winds. Gales around the coasts.

“This will be troublesome. It brings heavy rain to the saturated regions, many already on flood alert. 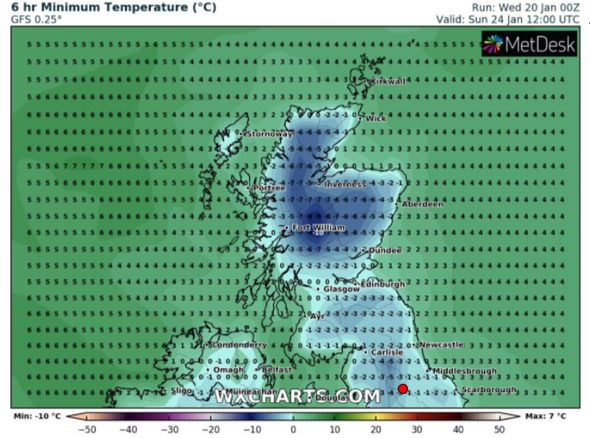 “The back edge will see snow, mainly over the hills from southeast Scotland, through northern England, Wales, North York moors and Peak District and the southerly winds will strengthen over eastern England.”

It comes as some parts of the UK could see two months’ worth of average rainfall in just two-and-a-half days as Storm Christoph moves in.

Weather warnings for heavy rain are in force across the country, and the unsettled conditions could also bring significant flooding, powerful winds and snowfall as the storm engulfs the country through the middle of the week.

The Met Office has issued a series of weather warnings and an amber alert for rain has been put in place across parts of the Midlands and northern England since Tuesday morning, while a less serious yellow warning is in place across the rest of England, parts of Scotland and Northern Ireland. 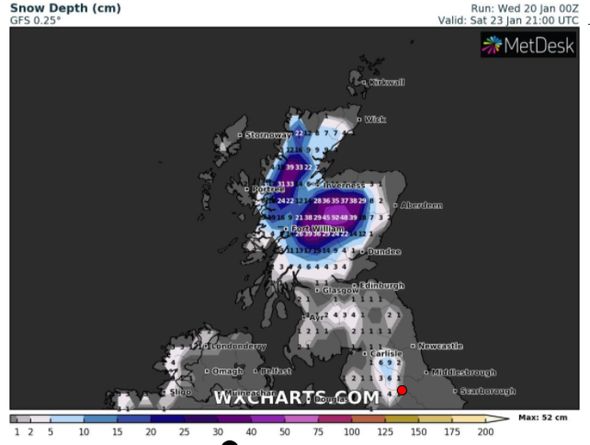 Meanwhile, Public Health England (PHE) issued a cold weather alert from “first thing” on Thursday until 9am on January 25 for the North East, North West and Yorkshire and the Humber.

Temperatures overnight tonight are expected to plunge as low as -6C in northern Scotland while in the south, it will be as warm as 8C, weather charts suggest.

By Sunday, temperatures will be as low as -10C to -8C in most parts of Scotland and as high as 6C in London.

Celebrities
Bella Thorne jammed out on Instagram in the tiniest shorts and unbuttoned shirt to her new single, ‘Shake It’. Fans...
Lifestyle
Better Call Saul fans are used to waiting a long time between seasons. The break between the explosive season 5...
TV & Movies
On the heels of the Golden Globe win for Ted Lasso star and creator Jason Sudeikis, Apple has announced a...
World News
Footage of surging waves hitting Tokomaru Bay, on the East Coast, has been posted on social media. Waiapu Civil Defence...
Beauty
Don't look now, but spring is just on the horizon -- which means that if you haven't already started, now...
Fashion
RECKON you are eagle-eyed enough to spot a tiny moth hidden among some clothes? The pesky insect has made its...
Recent Posts