When a suspect is hauled down to the cop shop, it is customary for the plod in charge of the interrogation to keep them waiting a while.

The idea is to let them stew in their own juices as they consider their fate. With any luck, by the time you get to them they’re ready to spill the borlotti.

Such tactics were at the forefront of Andrew Marr’s strategy when he welcomed Michael Gove on to his Sunday morning programme yesterday. 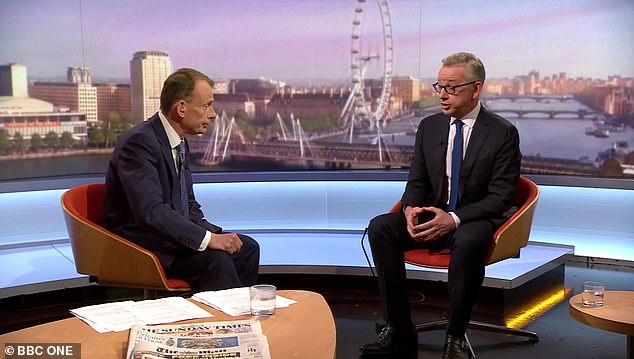 Mr Gove, the public has learned via this newspaper, was once, as prosecuting silks might say, a user of cocaine.

The revelations are of such inconvenience to the Environment Secretary’s leadership ambitions he voluntarily reported to Broadcasting House for questioning.

DI Marr kept the man hoping to be our next prime minister waiting a whole half an hour. He first wished to cross-examine fellow leadership candidate Esther McVey and Labour’s chief Morris dancer Barry Gardiner. Drugs? No, gov, never touched ’em, they both insisted.

Eventually, his attention turned to Mr Gove. For the benefit of the tape, let the record show the suspect at this point shuffled gingerly in his chair. Under the studio lights we saw the Govester’s once auburn locks are now quite grey.

Fellow Scotsman Marr decided to delay the fast bowling for a bit, leaving the Bolivian marching powder business for later on. First, a few gentle looseners on his guest’s leadership ambitions.

Mr Gove said he was ready to be prime minister. Ready from day one.

‘I have the experience,’ he said assertively, sounding a bit like an over-eager contestant on The Apprentice. 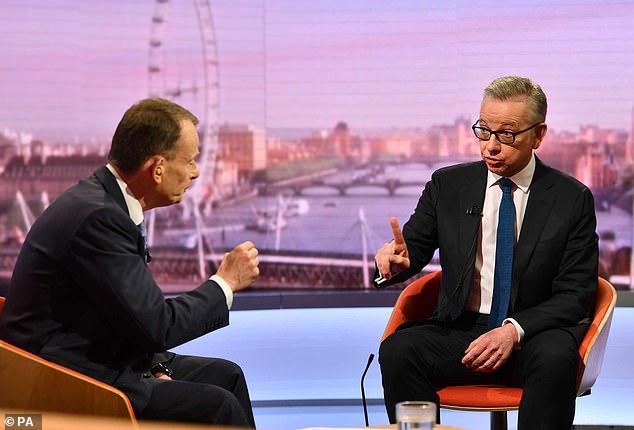 ‘I have the experience,’ Mr Gove said assertively, sounding a bit like an over-eager contestant on The Apprentice.

If PM, he would seek a renegotiation on Theresa May’s deal with Brussels, led by himself and a smart troupe of officials. Google translate: Hopeless Whitehall Sir Humphrey Olly Robins won’t be anywhere near it.

Marr, oddly, kept asking questions about what would happen ‘under Michael Gove’ as though they were discussing someone else.

Finally, we came to the thorny issue of drugs. As Mr Marr began addressing this, his programme’s director went all Sergio Leone, slowly panning in on Mr Gove’s face, hoping, perhaps, to reveal signs of tension.

The Gove brow, I should point out, remained bone-dry.

Was it a ‘habit’, Mr Marr asked of the Govester’s Keef Richards period? ‘I don’t believe it was,’ he replied matter of factly.

Did he deserve to go to prison for his activities? Mr Gove agreed he was fortunate not to have seen the inside of a jail cell. Steady! He hadn’t so much donned a hair shirt as opted for a bit of Opus Dei- style self-laceration.

Marr then pursued the suggestion in one Sunday newspaper that Mr Gove’s confession might result in him being banned from travelling to the United States.

Of all the off-cuts from this saga, this is surely the most ludicrous. Miguel coolly suggested that if he became prime minister, the idea our closest ally might bar him from entering the country might be slightly fanciful.

The hypocrisy charge was Marr’s next tactic. He pointed out that while Mr Gove was education secretary, teachers were suspended if they were caught taking drugs.

Is it a case of one law for politicians and another for the rest? ‘I wouldn’t want to look in to individual cases,’ said Gove. This is politico speak for ‘let’s not go there…’

We briefly got to hear about Gove’s plan to scrap VAT, a pleasing enough sounding policy, though how often have we heard a Tory pledge to simplify the tax system and yet nothing ever happen?

Suddenly, Marr announced it was time roll the credits. Phew! We would be spared the embarrassing dad-rock act which usually ends the show.

Mr Gove now awaits the verdict of his supporters. I suspect he’ll escape this mess with a mild caution.