LITTLESbrough: Hobbyist, 61, adds final touches to meticulous model of his home town Middlesbrough based on 1830s plan after spending 15 HOURS a day for nearly a decade making one MILLION tiny roof slates and cobbles

A hobbyist who has spent the equivalent of 1,125 days across almost a decade on recreating a historic view of his home town has revealed how the ‘monster’ project has taken over his life.

Steve Waller, 61 of Middlesbrough, has spent 15-hours a day for more than nine years carving and painting every tiny detail of his St Hilda recreation project that he calls his ‘labour of love and hate’.

His incredibly detailed, meticulously planned and all consuming project takes pride of place in Steve’s bedroom while he sleeps on a camp bed in his kitchen.

He has spent around 27,000 hours – or 1,125 days – working on it and has already sculpted one million tiny individual roof slates and cobbles which measure just over 1mm each in size.

Andy Preston, Middlesbrough’s mayor, has promised the painstakingly crafted piece of art will be the ‘centrepiece’ of a future exhibition on the town. 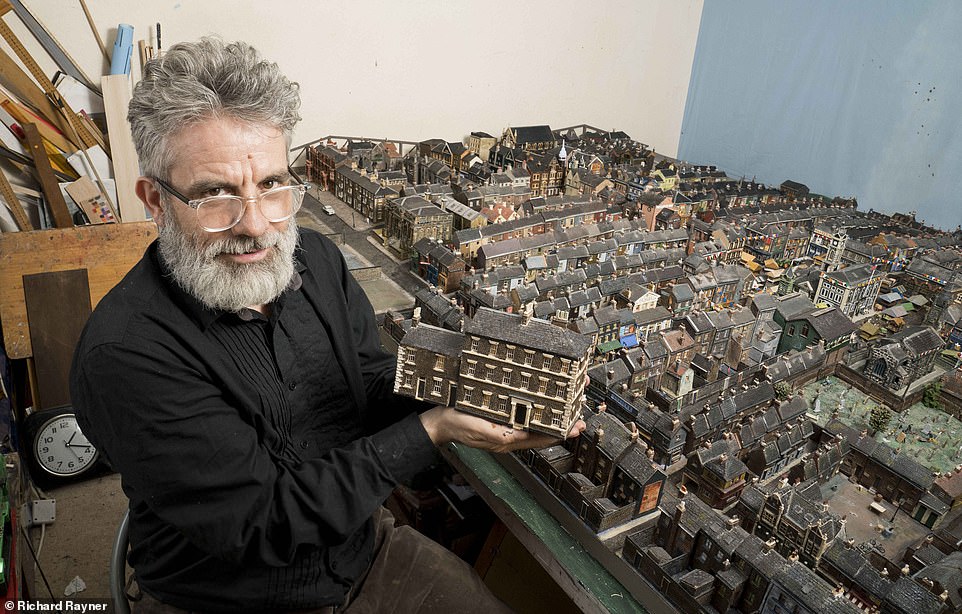 Steve Waller, 61 of Middlesbrough, (above) has spent 15-hours a day for more than seven years carving and painting every tiny detail of his model village 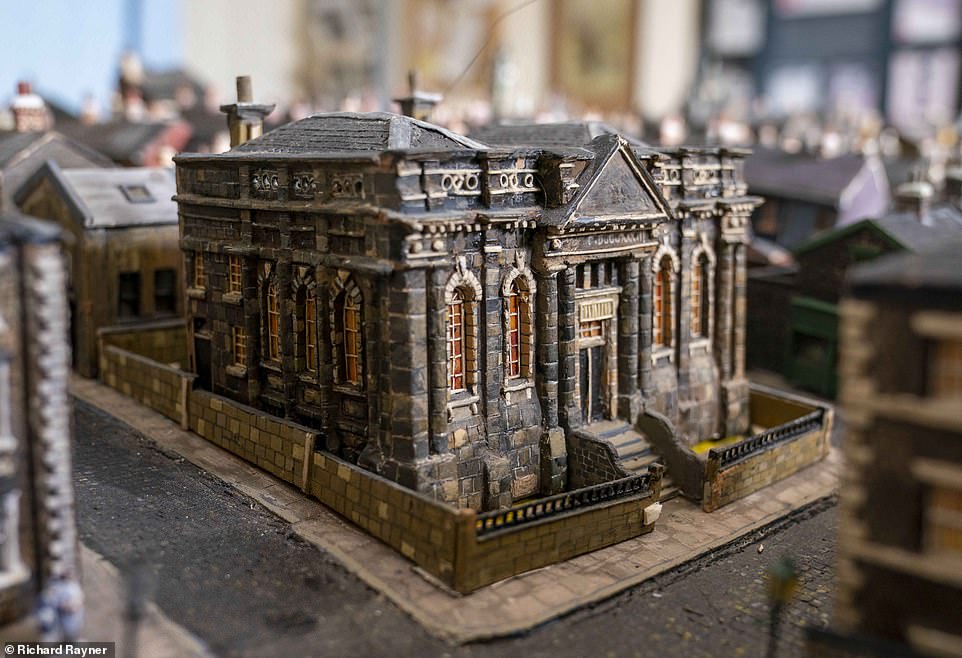 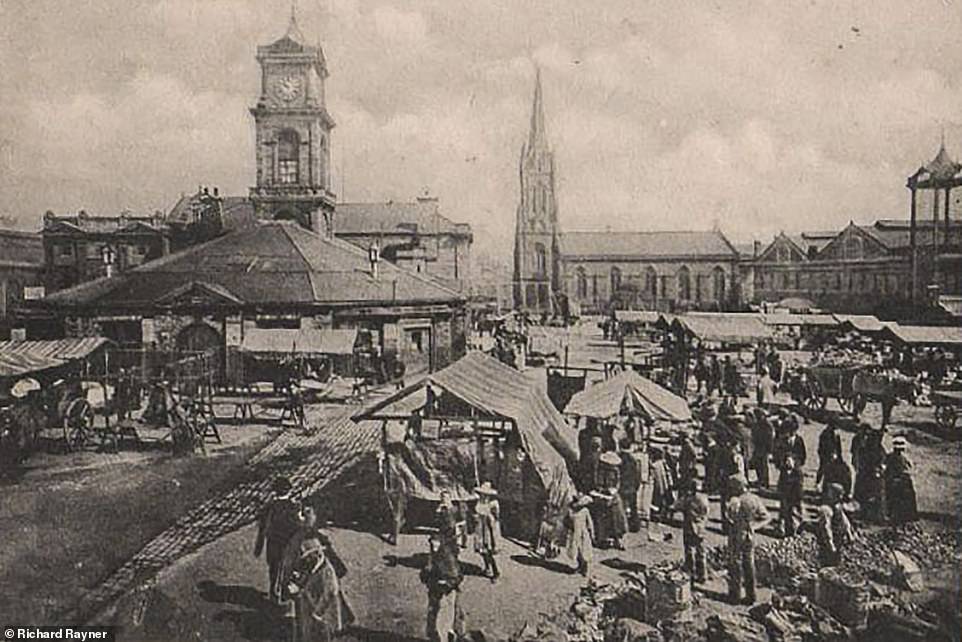 The model of the original St Hilda’s area of Middlesbrough, North Yorks, has been painstakingly mapped out using the original street plans which Steve obtained from the town hall

The former upholsterer has spent approximately 1125 days working on the project, which began in 2012 while he was recovering from a cricket injury.

The model of the original St Hilda’s area of Middlesbrough, North Yorks, has been painstakingly mapped out using the original street plans which Steve obtained from the town hall.

Each of the 50 municipal buildings and 300 terraced houses were lovingly recreated from balsa wood and resin using the exact blueprint the first town planners started working from in 1830.

Steve says: ‘I have to admit the model has become a monster, it’s my obsession and it’s a labour of love and hate.

‘There are days when the clock seems to be flying by, everything works beautifully and I’m lost in this little world that I’ve created.

‘There are also days when nothing goes right. I’ll be trying to create a tiny window from miniscule pieces of wood and one bit will ping from my tweezers and get lost on the floor. 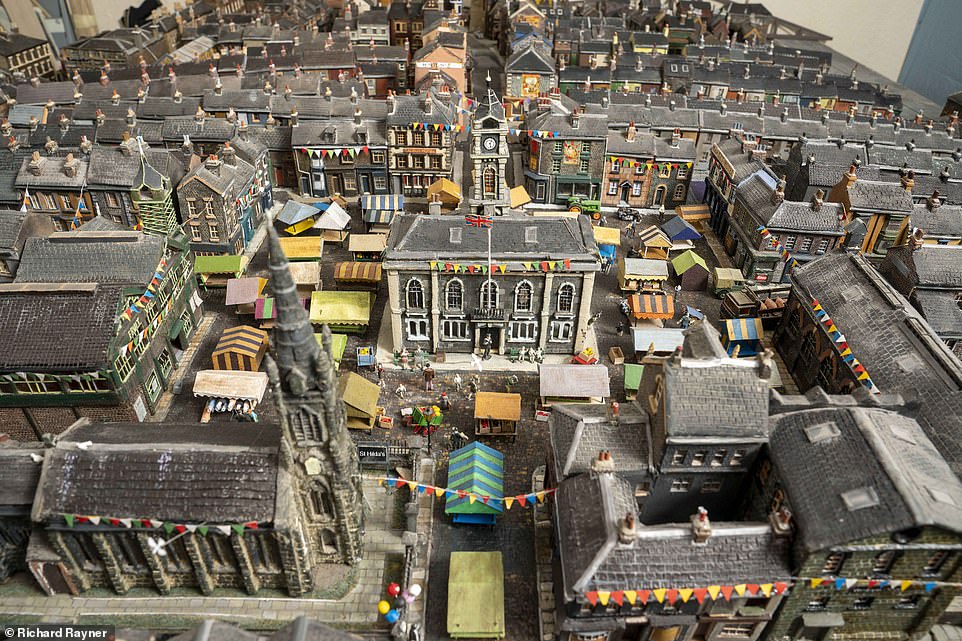 Steve has spent around 27,000 hours working on the model village – sculpting a mind-boggling one million tiny individual roof slates and cobbles which measure just over 1mm each in size 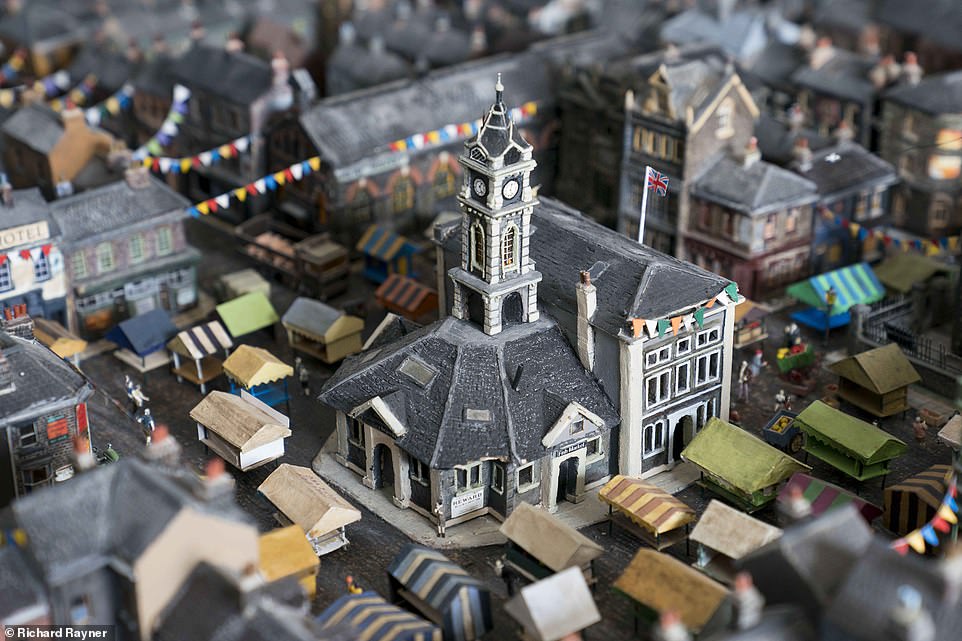 He bases the model off the exact blueprint the first town planners started working from in 1830 to create St Hilda’s, Middlesbrough 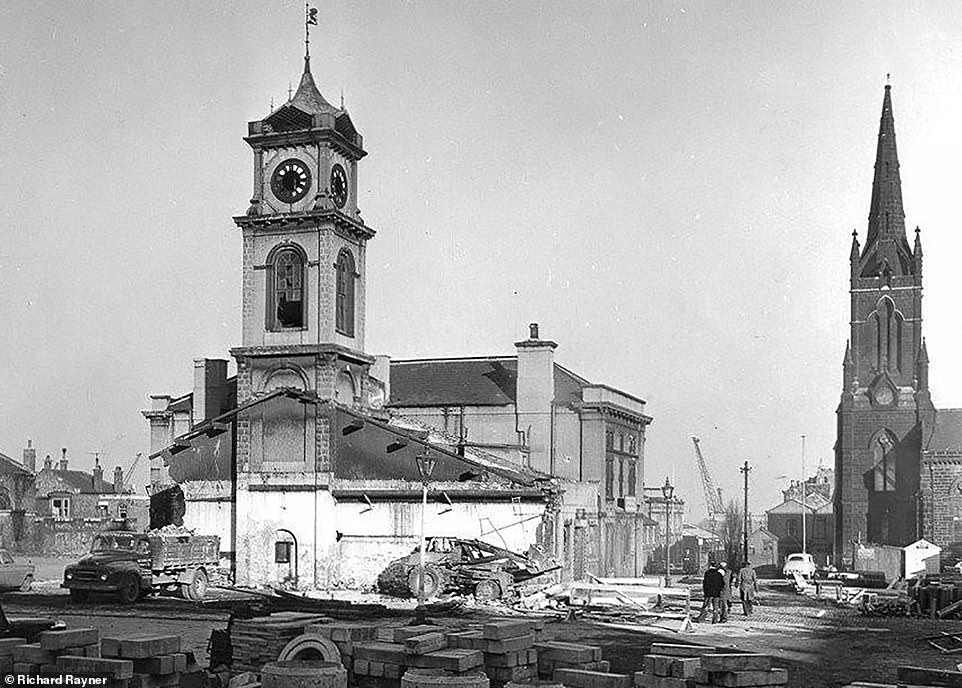 Since boyhood Steve was fascinated by the story of his great uncle, James Bateman, who served in the First World War with the King’s Royal Rifles and died during the Battle of the Somme in 1916. Pictured: Undated image of St Hilda, Middlesbrough

‘There have been moments like that when I’ve genuinely considered smashing the whole thing up and throwing it out of the bloody window.

‘Thankfully that’s never happened. I’m no Van Gogh but I do understand now how he went a bit crazy and cut part of his ear off.

‘It started out small but once I started I knew I wouldn’t be able to stop until I’d recreated the whole township of St Hilda’s.

‘I do realise that people will find that hard to understand but the compulsion to see this thing through to the end is very powerful.’

The ‘monster’ project has got to such a size that Steve has taken to sleeping on a camp bed in his kitchen while his 8ft by 8ft model village takes over his bedroom.

Steve, who was a full time carer for his mum, Elizabeth, until her death in 2019, began work almost by accident.

Since boyhood he had been fascinated by the story of his great uncle, James Bateman, who served in the First World War with the King’s Royal Rifles and died during the Battle of the Somme in 1916.

Steve said: ‘I was recovering from a cricket injury which had me laid up, I was finding it difficult to move very much and I started thinking about the route my great uncle might have taken as he walked out of MIddlesbrough to get a train to Winchester where his battalion was based.

‘I laid a map in front of me and plotted the building with match boxes, trying to guess the route he’d have walked from his home. 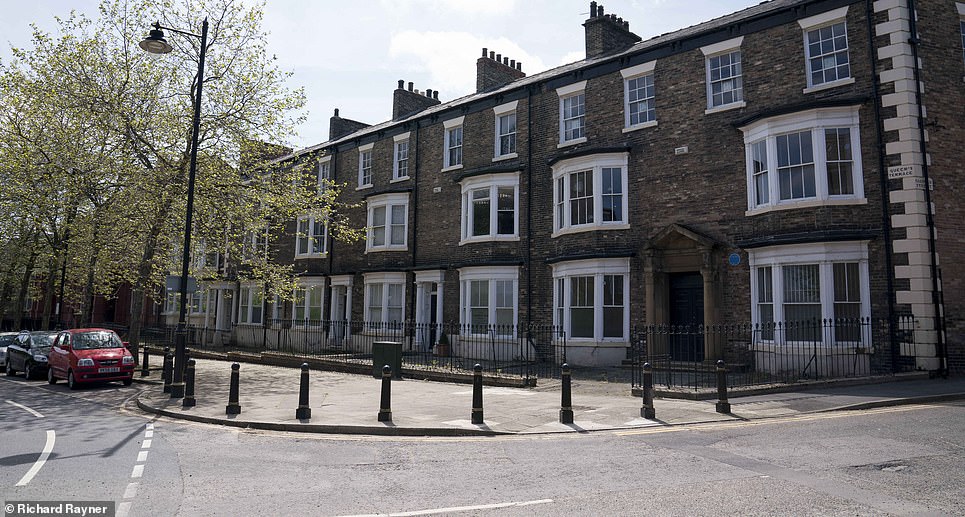 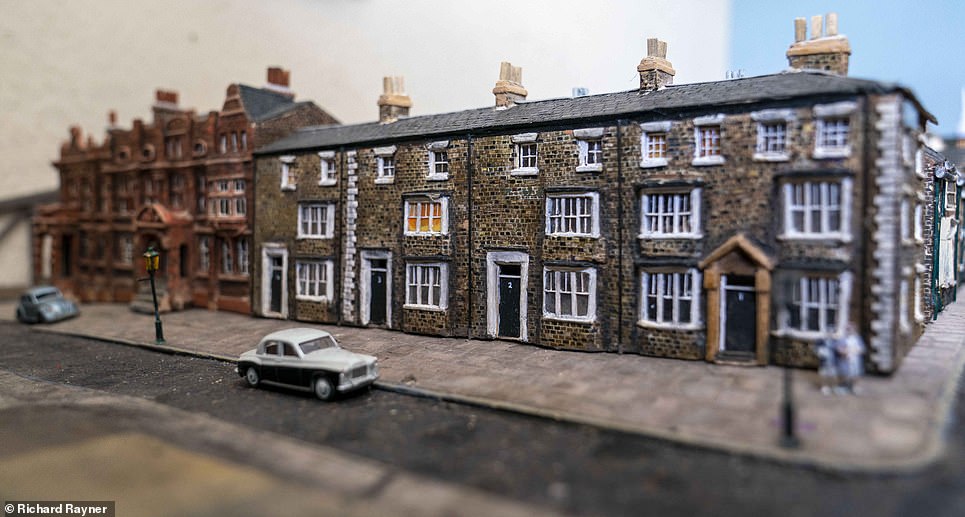 Then and now: A St Hilda’s street pictured in 2021 (left). It remains the oldest district in all of Middlesbrough but is today a world apart from Steve’s recreation (right) 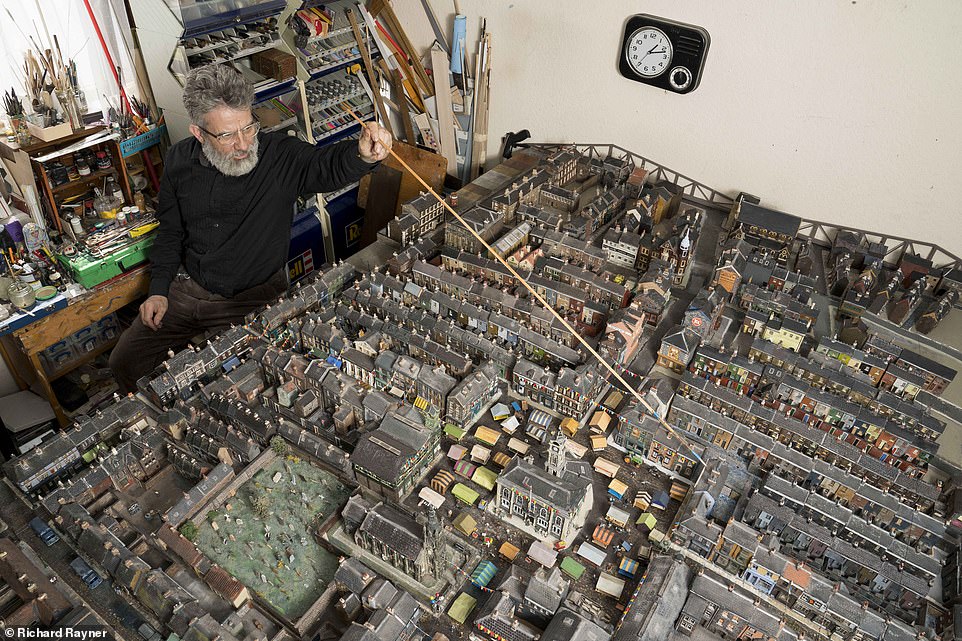 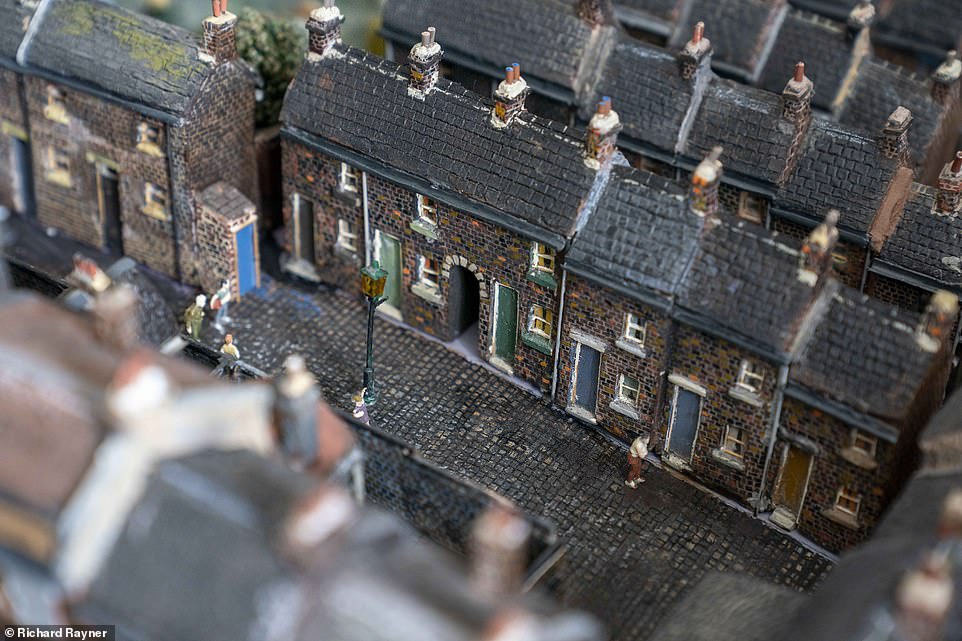 Steve says his recreation is now dedicated in memory of his beloved mother, who passed away aged 92 in a care home

‘Something struck me about seeing it in 3D like that and it called to me to start creating something in that form.

‘That’s where it all started and once it began there was no stopping it.

‘My mother was a ceramicist and she’d always pushed me to go to art school but I fell in with a different crowd and went in another direction.

‘But suddenly that artistic talent she had recognised really came out in me and while I was looking after her I started doing something that really made her proud.

‘It meant that I often had to get up in the early hours of the morning to work on my model so that I could also be ready to look after her and take her out when she woke. 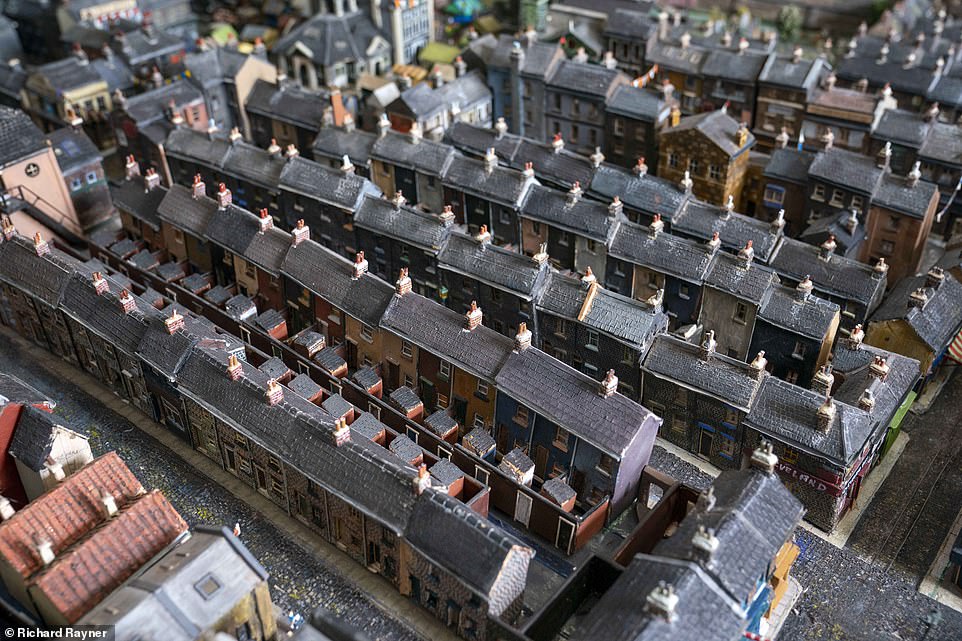 In the beginning, he laid out the 1830 town planning maps in front of him and started plotting each building with match boxes 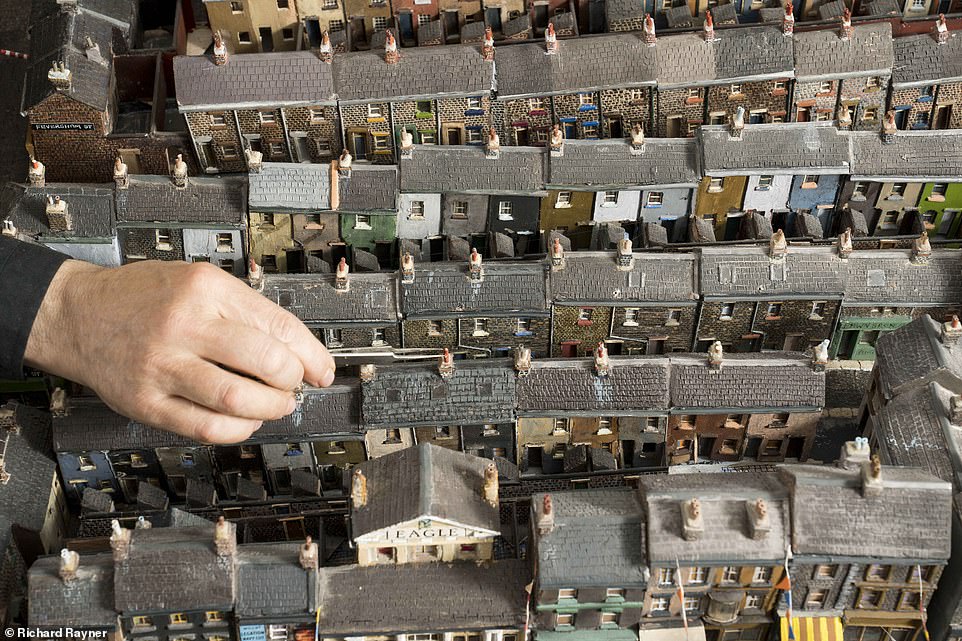 ‘She passed away in a care home 18 months ago aged 92 and now I’m putting in as many hours as I can every day.

‘I’m sorry she won’t be here to see it completed but I’m doing it in her memory now and that of my great uncle who inspired it.

‘I’ve been through some difficult times in life. I had a business which failed after I’d remortgaged my house to support it and that was a huge blow.

‘But the model has taught me that I have steel and perseverance and as I’ve worked on it I think it’s made me stronger. So as frustrating as it has been at times it’s given as much back to me as I have given to it.’

His masterpiece has come to the attention of Middlesbrough’s elected mayor Andy Preston who was astonished when he was given a personal viewing. 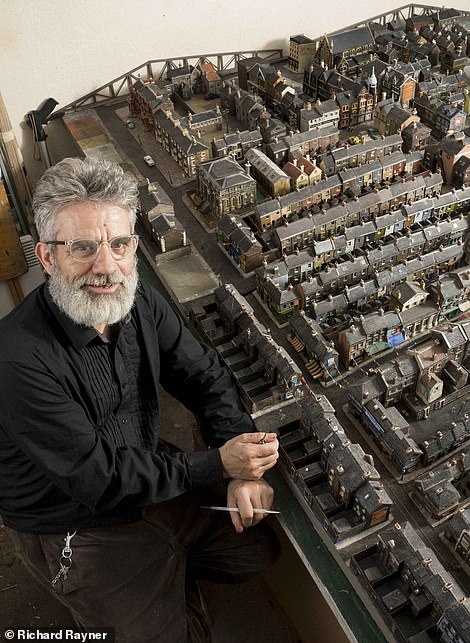 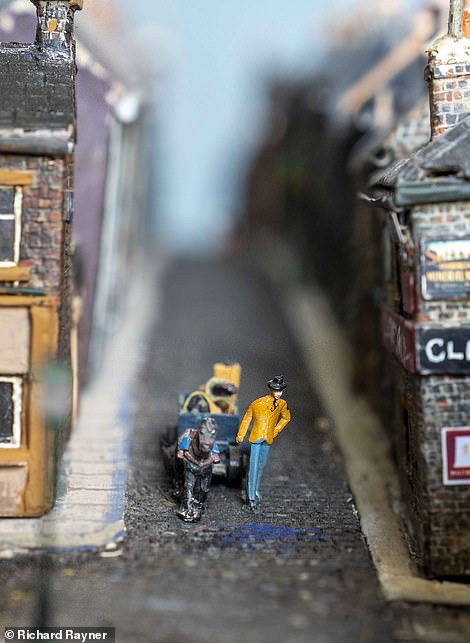 Mr Preston said: ‘The model has taken years to build and needs another 12 months to be completed – but it’s incredible now.

‘When it’s finished, I would like it to be the centerpiece of an exhibition and gathering to celebrate that amazing part of Middlesbrough – an area that was so savagely demolished.’

St Hilda’s was a small township, built in 1830 on a grid layout, to house workers from Port Darlington, which was set up at the end of the Stockton and Darlington Railway to send Durham coal around the country.

The settlement spread quickly, spreading south from the River Tees to form Middlesbrough.

From 1846, the railway extended eastwards to Redcar, cutting off St Hilda’s from the southward sprawl of Middlesbrough.

It became known as ‘over the border,’ originally an affectionate nickname but by the 1960s it had degenerated into slum housing and most of it was demolished – leaving Steve’s model as the only reminder of how it looked in its brief glory years.