The mass arrests, including of former lawmakers, were the largest move against Hong Kong’s democracy movement since the law was imposed by Beijing to quell dissent in the semi-autonomous territory last June.

In a video released by former lawmaker Lam Cheuk-ting on his Facebook page, police turned up at his house and told him he was "suspected of violating the national security law, subverting state power." Police told those recording the video to stop or risk arrest.

Police did not immediately comment on the arrests, reported by the South China Morning Post, online platform Now News and various political groups and figures.

At least seven members of Hong Kong’s Democratic Party — the city’s largest opposition party — were arrested, including former party chairman Wu Chi-wai. And former lawmakers Lam, Helena Wong and James To were also arrested, according to a post on the party’s Facebook page.

Benny Tai, a key figure in Hong Kong's 2014 Occupy Central protests and a former law professor, was also arrested by the police, according to local media reports. Tai was one of the main organizers of the primaries, which were held last July with the intent of fielding enough pro-democracy candidates in the legislative elections to gain control of the chamber. 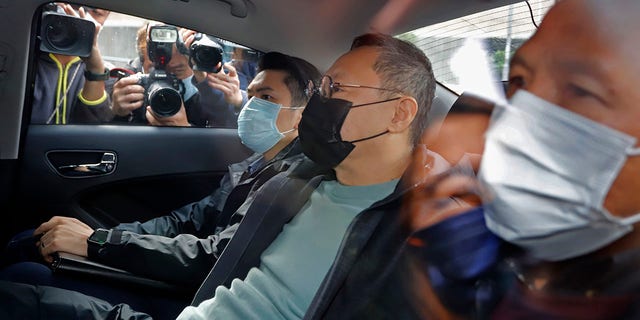 Former law professor Benny Tai, center, a key figure in Hong Kong’s 2014 Occupy Central protests and also was one of the main organizers of the primaries, sits in a car after being arrested by police in Hong Kong, Wednesday, Jan. 6, 2021. About 50 Hong Kong pro-democracy figures were arrested by police on Wednesday under a national security law, following their involvement in an unofficial primary election last year held to increase their chances of controlling the legislature, according to local media reports. (AP Photo/Apple Daily)

All of the pro-democracy candidates in those unofficial primaries were arrested, according to tallies of Wednesday's reported arrests.

The home of Joshua Wong, a prominent pro-democracy activist who is serving a 13 1/2-month prison sentence for organizing and participating in an unauthorized protest last year, was also raided, according to a tweet posted from Wong's account.

Police also went to the headquarters of Stand News, a prominent pro-democracy online news site in Hong Kong, with a court order to hand over documents to assist in an investigation related to the national security law, according to a livestreamed video by Stand News. No arrests were made.

The security law criminalizes acts of subversion, secession, terrorism and collusion with foreign powers to intervene in the city’s affairs. Serious offenders could face up a maximum punishment of life imprisonment. 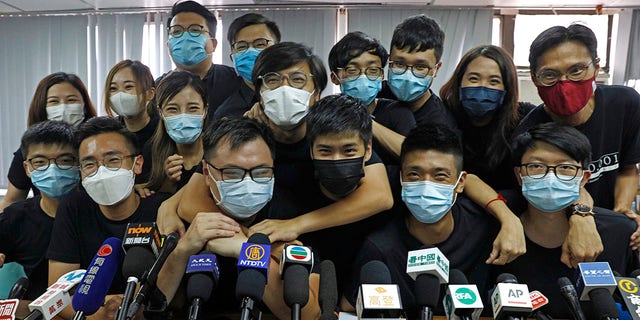 FILE – In this July 15, 2020, file photo, pro-democracy activists who were elected from unofficial pro-democracy primaries, including Joshua Wong, left, attend a press conference in Hong Kong. About 50 Hong Kong pro-democracy figures were arrested by police on Wednesday, Jan. 6, 2021 under a national security law, following their involvement in an unofficial primary election last year held to increase their chances of controlling the legislature, according to local media reports. (AP Photo/Kin Cheung, File)

The unofficial primaries held in July last year attracted more than 600,000 voters even though pro-Beijing lawmakers and politicians had warned the event could breach the security law. Pro-democracy figures had hoped to use the vote to build support and win a majority of seats in the legislature, which they could use to vote against bills they deemed to be pro-Beijing, block budgets and paralyze the government.

Hong Kong leader Carrie Lam had said at the time that if the primary election was aimed at resisting every policy initiative by the Hong Kong government, it may fall under subverting state power, an offence under the national security law.

Following the handover of Hong Kong to China by the British in 1997, the semi-autonomous Chinese city has operated on a "one country, two systems" framework that affords it freedoms not found on the mainland. In recent years, Beijing has asserted more control over the city, drawing criticism that Hong Kong’s freedoms were under attack.

The legislative elections, originally slated to be held in September, were later postponed for a year. Lam cited the health risk of the coronavirus pandemic, though the pro-democracy camp denounced the postponement as unconstitutional.

In November, all of Hong Kong’s pro-democracy lawmakers resigned en masse after four of them were disqualified, leaving a largely pro-Beijing legislature.

The sweeping arrests drew condemnation from Anthony Blinken, the U.S. Secretary of State nominee for the upcoming Biden administration, who said on Twitter that it was an "assault on those bravely advocating for universal rights."

"The Biden-Harris administration will stand with the people of Hong Kong and against Beijing’s crackdown on democracy," Blinken wrote in his tweet.

The arrests suggest that Beijing has failed to learn from its mistakes in Hong Kong that repression generates resistance, according to a statement from Human Rights Watch’s senior China researcher Maya Wang.

She said that "millions of Hong Kong people will persist in their struggle for their right to vote and run for office in a democratically elected government."

In further remarks to The Associated Press, Wang said it wasn’t clear what provisions of the law were being cited to justify the arrests, but that local authorities seem less concerned with legal substance.

"The very nature of the national security law is as a draconian blanket law allowing the government to arrest and potentially imprison people for long terms for exercising their constitutionally protected rights," Wang said.

"The veneer of rule of law is also applied in mainland China stripped of any meaning. Hong Kong is looking more like mainland China but where one ends and the other begins is hard to discern," she said.

Celebrities
Little House on the Prairie star Melissa Gilbert and A New Kind of Family‘s Rob Lowe had a passionate relationship...
Lifestyle
Despite their problems, Kim Kardashian isn’t ready to divorce Kanye West, a source tells HL EXCLUSIVELY. She ‘wants them to...
TV & Movies
Outlander cast tease details of ‘exciting’ season sixSo far, seasons one to five of Outlander have mainly focused on the...
World News
Egunsi Foods, a line of chilled ready-to-heat and eat West African foods from a company based in Harlem, has added...
Beauty
Christie Brinkley, 66, just showed off her toned abs in a new bikini Instagram photo.She's big on running, spin classes,...
Fashion
SHE had a hit with the song ‘I’m Real’ - and this week J-Lo insisted everything about her face is...
Recent Posts
We and our partners use cookies on this site to improve our service, perform analytics, personalize advertising, measure advertising performance, and remember website preferences.Ok