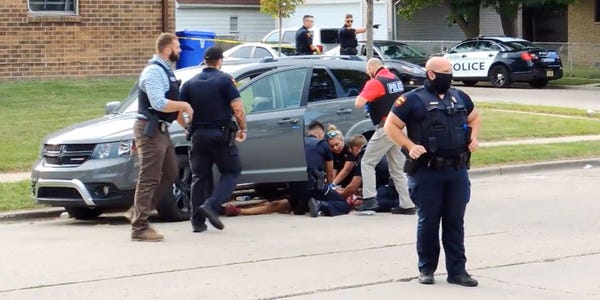 Police in Kenosha, Wisconsin, said that a 911 call involving a "domestic incident" took them to Jacob Blake's neighborhood on August 23.

The 29-year-old Black man was shot seven times in the back within three minutes of officers arriving, according to dispatch audio pieced together by the Milwaukee Journal Sentinel.

The accounts leading up to that encounter vary.

Blake's defense team says he was trying to break up a fight, according to NPR. A police report says that "a female caller reported that her boyfriend was present and was not supposed to be on the premises." It also describes officers trying unsuccessfully to take Blake into custody.

Asked how else the situation could've been handled, Sean Blackmon, a spokesperson for the Stop Police Terror Project DC, replied: "I would suggest not shooting him in the back seven times."

Blackmon wasn't trying to be flippant. He said police, too often, resort to violence when things don't go the way they want.

"We have to ask ourselves: Was Jacob Blake shot … and partially paralyzed because he wouldn't leave the premises? Or because he refused to obey the word of a cop? And to police, not doing every single thing they say is a crime worthy of death," he said.

Paige Fernandez, policing policy advisor for the ACLU National Political Advocacy Department, took it a step further, saying that armed police officers should never have been at the scene to begin with.

"Even if they did respond," she said, "they shouldn't have been armed, and there shouldn't have been multiple police. Police didn't de-escalate that situation — they escalated it and tried to murder a man. They are unreformable, and we must work to shrink their role and responsibilities, so they aren't able to cause further harm."

Activists and policy experts who spoke to Insider believe that public safety should be in the hands of the community.

But that's not without its issues: George Zimmerman, a neighborhood watch captain in Sanford, Florida, shot and killed 17-year-old Trayvon Martin in 2012 after reporting that the teenager appeared "suspicious.

Eight years later, Travis and Gregory McMichael hopped into their truck and chased Ahmaud Arbery through their Georgia neighborhood based on the belief that he resembled a burglary suspect. The 26-year-old Black man was gunned down during that encounter.

Blackmon described those crimes against Black people as acts of "racist vigilantism," and stressed the need for "organized democratic community-based public safety."

A warrant had been issued for Blake's arrest in July. He was charged with felony sexual assault and disorderly conduct and criminal trespassing, both misdemeanors, according to Wisconsin court records. The Wall Street Journal reported that the charges stemmed from his girlfriend — who is also the mother of three of his six children — telling police that Blake entered her house, digitally penetrated her without her consent, and took off with her car and debit card.

Reporters asked Kenosha Police Chief Daniel Miskinis on Friday if there was any connection between the warrant and the way officers responded to Blake. Miskinis said he wasn't sure, as the Wisconsin Department of Justice took over the case.

Melina Abdullah, a co-founder of Black Lives Matter, shared with Insider something that she rarely opens up about: She has experienced domestic violence.

Abdullah said she doesn't accuse Blake of wrongdoing. But she said that Blake's fate isn't justice.

"I don't know a survivor who wants the outcome that was meted out on Jacob Blake for even their abuser," she said. "What they want is an end to the abuse."

Abdullah turned to her brother for support. But not everyone can depend on their family like she did, she said. That makes it critical for American society to be "creative and thoughtful and restorative and transformative in our approach to justice."

"We really believe that the answer to all of this is investing in community," she added. "So even if you don't have a wonderful blood brother like I do, you can have the community … offer what you need."

Abdullah views a budget as "a statement of values and priorities," adding that cities would be better off if put taxpayer dollars were utilized on the "front end," rather than pouring billions of dollars into police agencies every year.

That would enable officials to provide house and mental health resources to people in need, and bolster "community resources that can help to rehabilitate assailants and help to heal the victims or survivors," she said. It would also involve abolishing police departments as we currently know them.

"The police are basically there to respond to crime," but "interventionists and prevention workers can actually bring peace to neighborhoods," Abdullah said.

For his part, Blackmon took a long view of policing in the United States. He said the current policing system is worse-off for disadvantaged people, including people of color. The result of this centuries-old status quo is a build-up of "resentment and frustration," he said, and "the police are put in place to keep a lid on the pot of frustrations."

Reducing the size of a police department is not enough, he said, calling for a holistic approach that is fueled by the "intentional reinvestment" of funds into better education, affordable healthcare, employment opportunities, youth services, and community-led peacekeeping efforts.

Fernandez echoed the sentiment, noting that the ACLU supports divestment and specifically uses that term because it "not a police or prison abolitionist organization."

Instead, she said, the ACLU believes "we need more investment in communities of color that have suffered from decades of underinvestment in everything except police, racist policies, and their related punitive programs. If we invested more in prevention, many domestic incidents wouldn't have happened in the first place."

Abdullah believes that the next Zimmerman or McMichael can be avoided by ensuring that those who are tasked with safeguarding a community come from within it and can understand its pain points.

So Black neighborhoods, for instance, would be empowered to look internally when it comes to their own safety.

"We want the community that's most impacted by violence to be the providers of security," she said. "We want community members to be able to determine what security looks like for them."

Celebrities
Fox News Flash top entertainment headlines for September 30 Fox News Flash top entertainment and celebrity headlines are here. Check...
Lifestyle
We will use your email address only for sending you newsletters. Please see our Privacy Notice for details of your...
TV & Movies
Both series will take place at Globe Life Field in Arlington, Texas ESPN may be synonymous with sports, but plenty...
World News
PUB chain Fuller’s may have to slash up to 500 jobs because too many people are still working from home....
Beauty
The Nordstrom Anniversary Sale ended a month ago, so finally it is time for another Nordstrom sale. Snag your favorite items on sale...
Fashion
There are moments in each watch brand’s history where a eureka moment has helped define it as a brand— rubber...
Recent Posts
We and our partners use cookies on this site to improve our service, perform analytics, personalize advertising, measure advertising performance, and remember website preferences.Ok