As a former foster care baby who had a wonderful kinder experience, I know early childhood education is absolutely critical for vulnerable kids.

It has recently been reported by The Age that Victoria’s most at-risk children – those known to child protection services – are being failed. Last year no fewer than 65 died. That’s an increase of 150 per cent since 2018. Research shows the number of kids in care will almost double in five years. 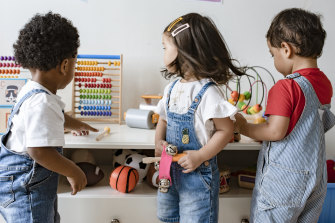 So, I’ve joined with leaders in the community sector in calling on the Labor government to implement a radical change to the way it seeks to support vulnerable families. We must reorient the current crisis-driven approach towards prevention.

For vulnerable kids, engagement in kinder means learning that otherwise would not occur, at a time when their brains are developing at the fastest rate. It also means expert professionals – our kindergarten teachers and other staff – are there to support them.

Yet in Victoria, shockingly few children known to child protection attend kinder. Bizarrely, the state government collects no data on the number of vulnerable kids who attend mainstream kinder. This is even though our state’s last major inquiry into at-risk children, the Protecting Victoria’s Vulnerable Children inquiry, said such data was essential.

To put this into context, more than 90 per cent of all Victorian kids attend kindergarten.

This massive discrepancy is unacceptable. And, according to new statistics published last week by the Australian Bureau of Statistics, it’s getting worse.

The Protecting Victoria’s Vulnerable Children inquiry urged the Education Department to “implement strategies designed to encourage greater participation by the families of vulnerable children” in kinder.

Nine years have gone by since these recommendations were made. However, most vulnerable Victorian children receive no early education services.

The state government must ensure all kids known to child protection have proof-of-life documentation. Foster care groups say many children in care have no birth certificates. As kinders require documentation such as this for enrolment, this is a major barrier.

Also, transport services must be made available for vulnerable children, so they can get to kinder in the first place. This could be done through an extension of the school student transport allowance.

As a boy, I, like so many kids who start their life in foster care, had a learning disability: I was kept down in grade two at my state primary school because I couldn’t read. I caught up again, in large part due to the solid foundation I had gained through kinder.

All vulnerable kids should have such a foundation. Yet today, many do not. That needs to change.