A huge fire has destroyed a large house on a street dubbed Billionaire’s Row in London – where houses cost up to £17 million.

Around 40 firefighters rushed to the scene in The Bishops Avenue in Hampstead, which is widely seen as one of the wealthiest streets in the world

Former inhabitants and owners of homes in the area include the super-rich Sultan of Brunei and the Canadian pop superstar Justin Bieber.

Emergency services rushed to the wealthy street at 3.45am and tackled a large house that was ablaze.

The London Fire Brigade says the roof, first floor, and ground floor of the detached house have all been destroyed.

The fire, which is under investigation, was brought under control by 6am but crews stayed at the scene for several hours. 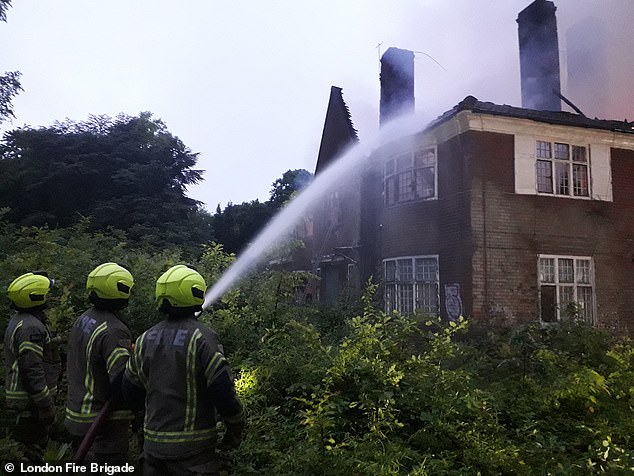 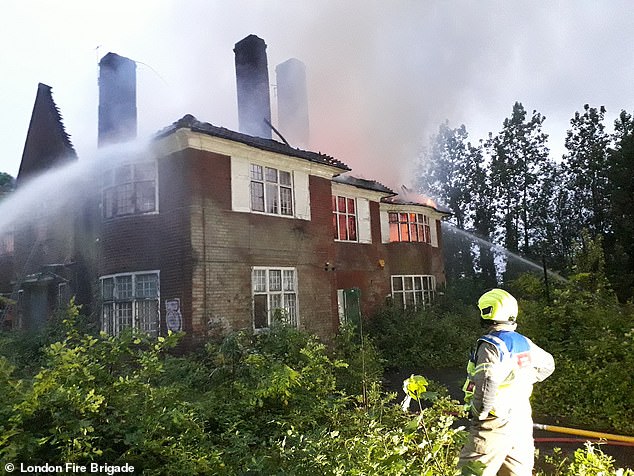 Emergency services rushed to the wealthy street at 3.45am and tackled a large house that was ablaze 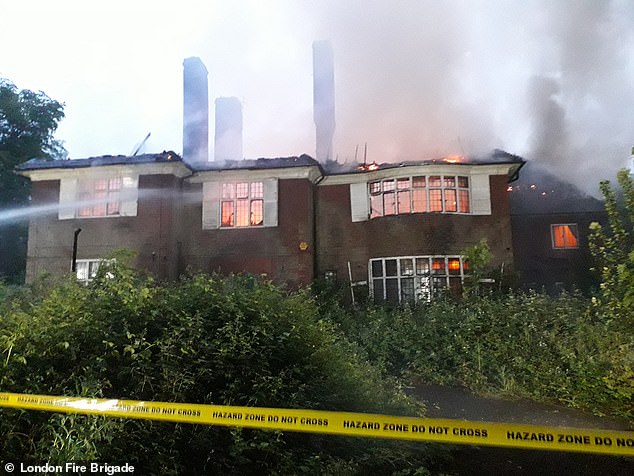 The London Fire Brigade says the roof, first floor, and ground floor of the detached house have all been destroyed

It is unclear who owns the house that was destroyed by the fire. Station commander Rob Hazzard says the home is not thought to be in use at this time and there are no injuries.

Mr Hazzard said: ‘The property is believed to be disused and empty at the time of the fire, so fortunately there were no reports of any injuries.

‘Firefighters were faced with a significant fire on arrival which involved the whole of this large building.

‘Crews worked hard to tackle the blaze and bring it under control.’

The 66-house street has been home to some of the world’s most wealthy, including Saudi royals, Heather Mills and Sir Billy Butlin – founder of the holiday camps.

However, many of the luxury homes on the street have been uninhabited since they were purchased in the 1980s.

A row of 10 houses, worth £73million, has stood empty ever since they were reportedly bought by the Saudi royal family.

An investigation by the Guardian in 2014 found that the row of mansions is collectively worth roughly £350million. It will now be worth significantly more.

A resident told the paper: ‘Ninety-five percent of the people who live here don’t actually live here. It is a terrible place to live really.

‘It is very boring and the road is very busy. I don’t think many people want to live in such big houses anyway.’

Many of the homes were bought for around £1million in the late 80s but were never lived in and now a detached mansion on the street will go on sale for £15million.

Celebrities
In this day and age, I feel like it’s actually pretty easy to avoid being transphobic? Like, you actually have...
Lifestyle
Us Weekly has affiliate partnerships so we may receive compensation for some links to products and services.The 2022 Nordstrom Anniversary...
TV & Movies
LOVE Island fans are all saying the same thing after Paige Thorne insisted Jacques O’Neill doesn’t have any red flags....
World News
A Ring doorbell captured the moment a gloveless delivery driver appeared to have a deep and prolonged scratch of his...
Beauty
Doja Cat Is Making a Case For "Money-Piece" Highlights in Summer If you thought "money-piece" highlights were made for the...
Fashion
A STYLISH size 16 woman has showed off the New Look dress that is perfect for summer. TikTok @marianna_romain looked...
Recent Posts