AMERICA'S latest oil spill is flooding the California coast with 126,000 gallons of fuel, beaching a wave of dead animals on Huntington's coastline.

As crews continue working to clean up the disaster, here are some of the other environmental spills that have devastated the country's shores. 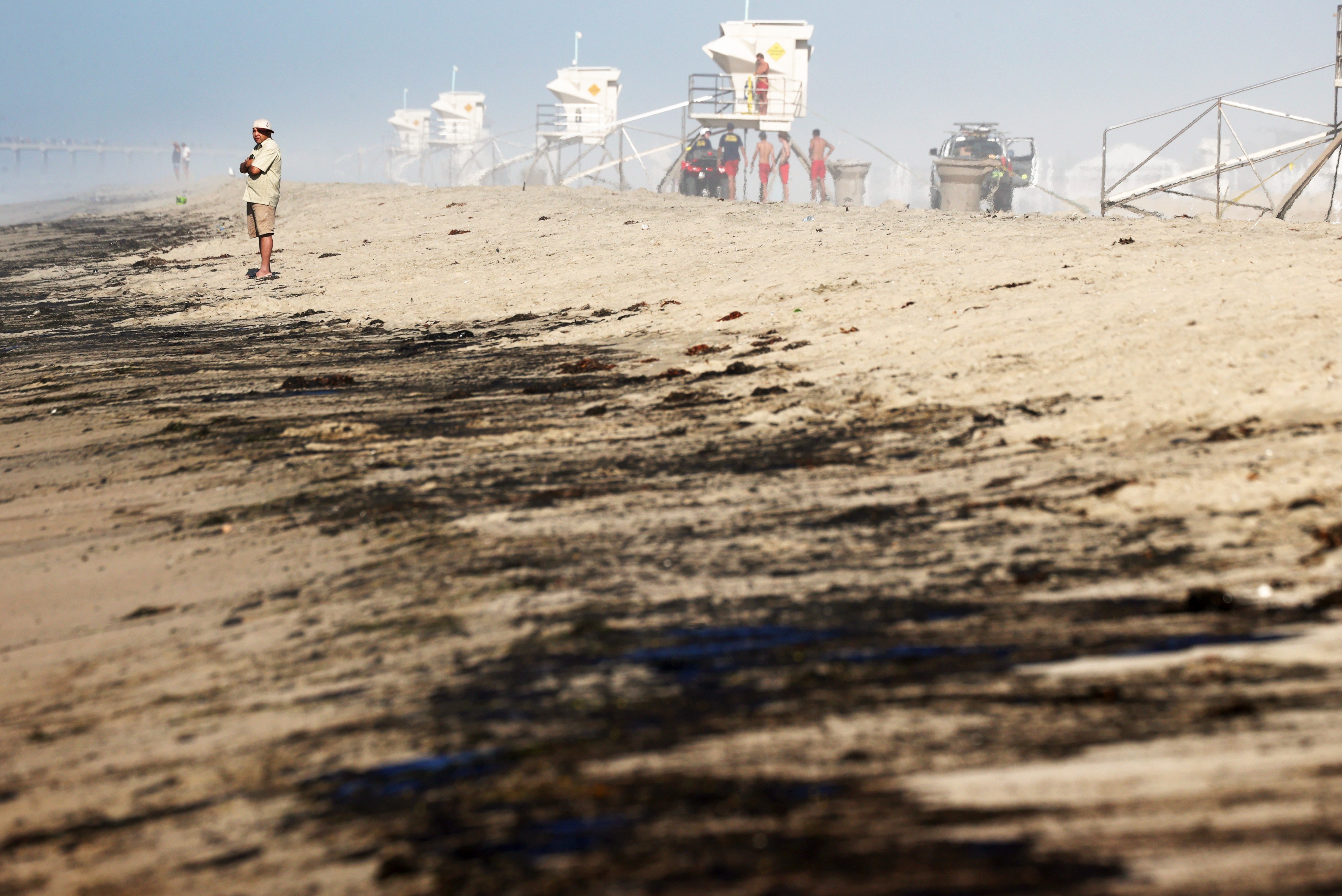 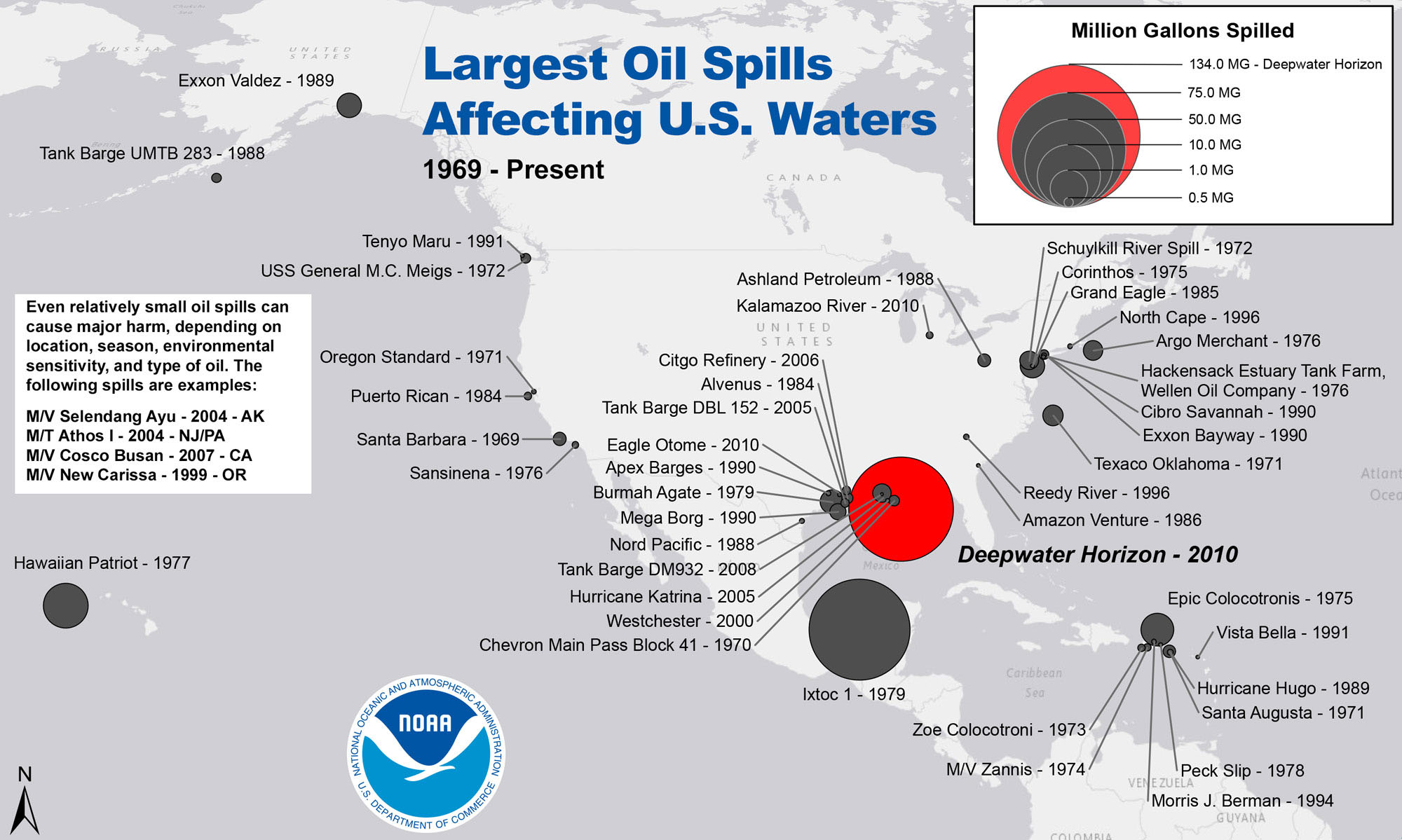 The US Coast Guard was notified of the spill in California around 9am on Saturday and by early Sunday morning, the oil had reached land.

The leak was about four and a half miles offshore and is thought to be about 3,000 barrels of oil or 126,000 gallons, Huntington Beach Mayor Kim Carr said.

It entered the Talbert Marshlands and the Santa Ana River Trail, fanning out over an area of about 5.8 miles, the city of Huntington Beach announced on Sunday morning.

Officials said the leak has been capped and an investigation to determine the cause is underway.

"This is just the latest tragedy of the oil industry," Jacqueline Savitz, chief policy officer, said. "The reality of our reliance on oil and gas is on full display here."

The spills have cost the US billions of dollars in clean-up and social costs, sparking a major environmental movement against off-shore drilling. 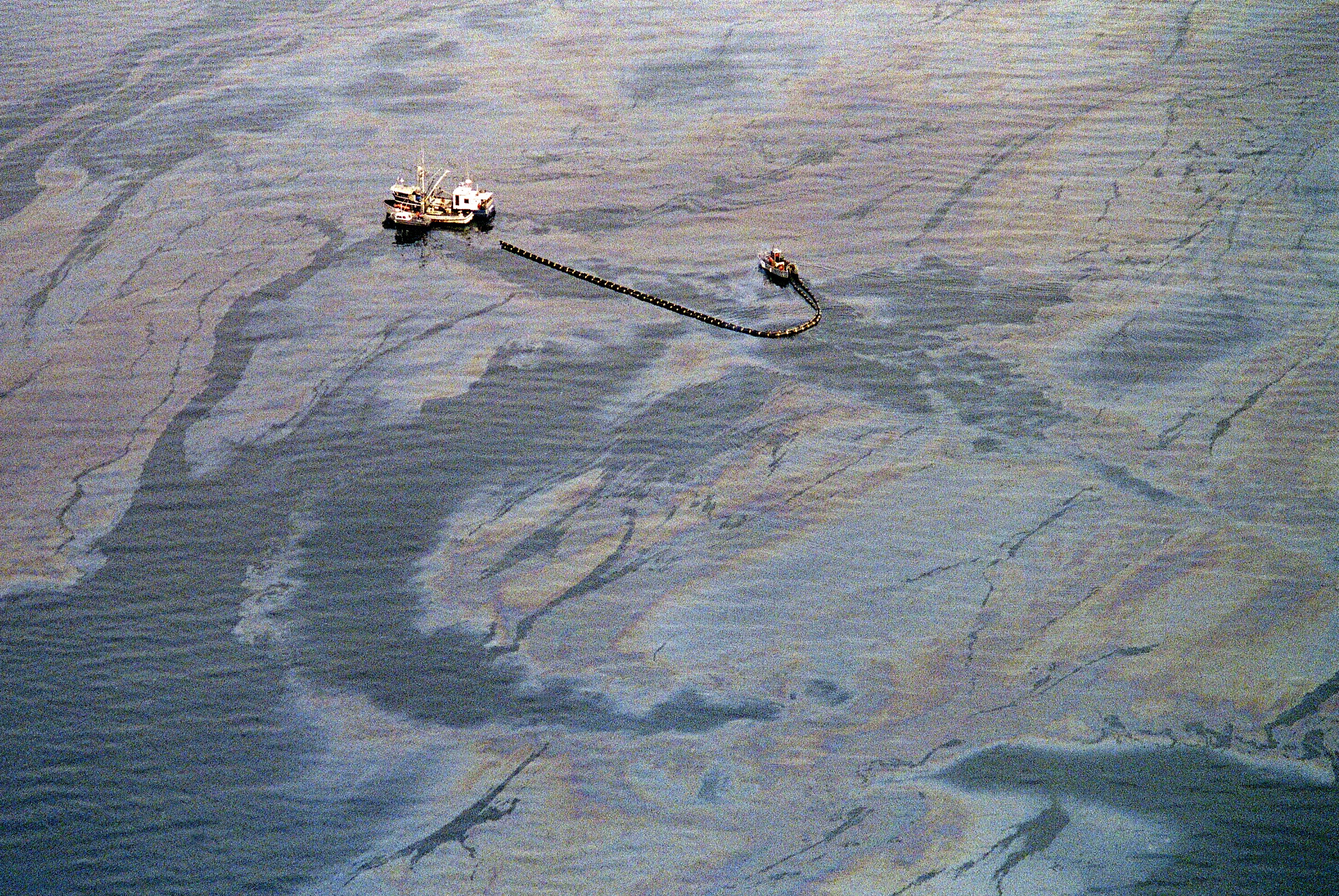 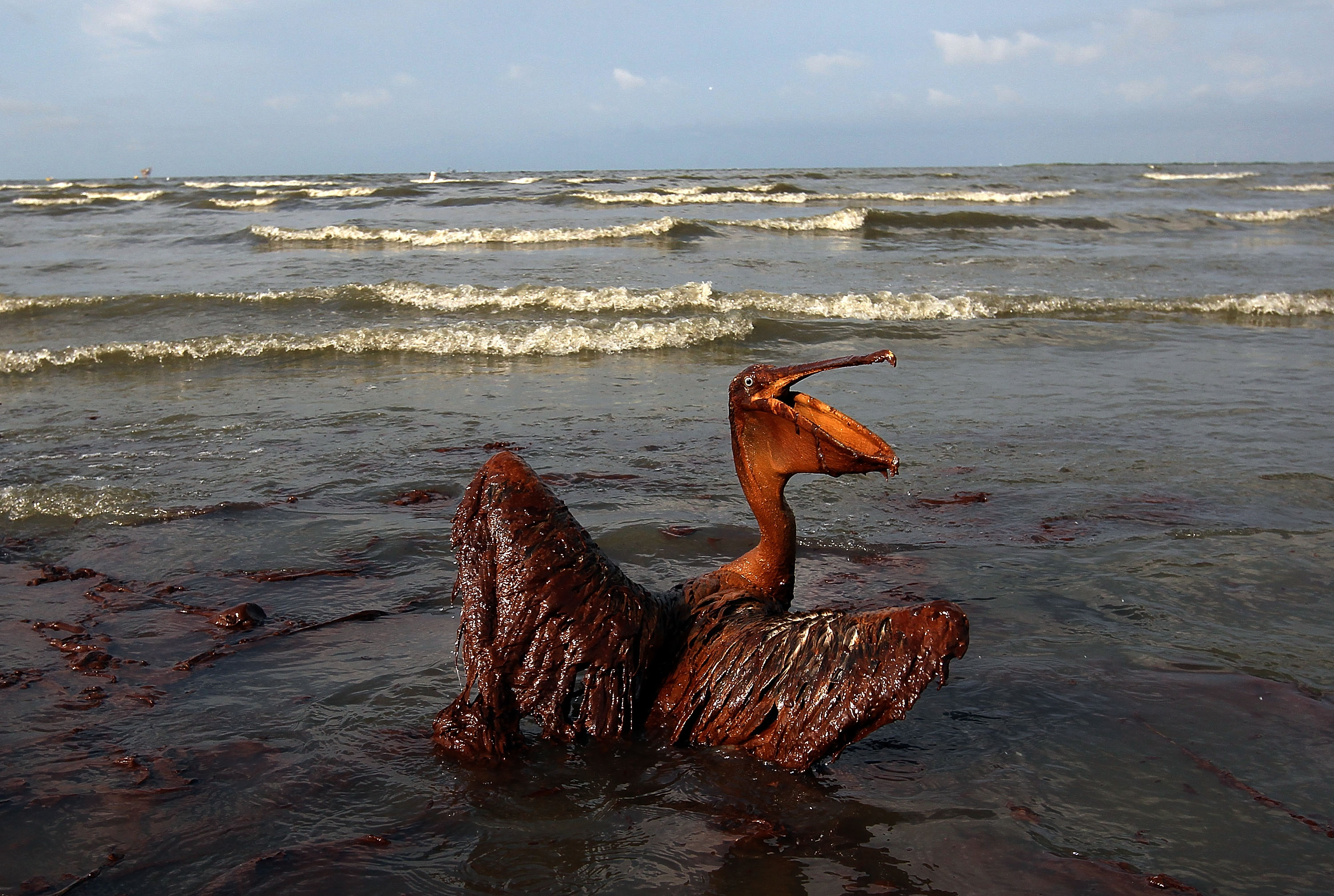 On March 24, 1989, the Exxon Valdez tanker ran aground off the coast of Alaska in what was regarded at the time as the worst oil spill in US history.

Ten million gallons of oil were dumped into the Prince William Sound and washed up across 1,300 miles of coastline in the months that followed, according to History.com.

Investigators determined that the captain of the Exxon Shipping Company tanker, Joseph Hazelwood, was unlicensed and had been drinking at the time that his ship collided with the Bligh Reef.

Exxon was forced to pay around $2billion in clean-up costs, plus about $1.8billion for habitat restoration and personal damages.

More than three decades later, some pockets of oil are still visible on the coast and scientists have used those areas to study the long-term effects of spills.

On June 8, 1990, a pump-room explosion and fire onboard the Mega Borg oil tanker caused the ship to pour 5.1 million of fuel into the Gulf of Mexico.

The Norwegian ship was located about 50 miles off the coast of Galveston, Texas, when it went up in flames that raged for eight days, inhibiting efforts to stop the leak.

After the fire ceased, the majority of the oil had been burned out on the water, leaving behind less than 40,000 gallons.

The direct cause of the explosion remains unclear and the ship had passed Coast Guard safety inspections weeks earlier.

The Taylor Oil Spill is the longest-running in US history and has leaked millions of gallons into the Gulf of Mexico for 15 years.

The leak erupted in September 2004 when a Taylor Energy platform about 11 miles off the coast of Louisiana was damaged by Hurricane Ivan.

A deep-sea mudslide sparked by the storm buried a mass of the platform's pipes under a mountain of sediment at the ocean floor, blocking efforts to cap the leak.

Taylor Energy spent years quietly working to slow the leak before backing out of the oil business in 2008, leaving behind a $666million trust intended to cover the cost of clean-up, according to SierraClub.org.

The spill gained new attention in 2010 when researchers investigating the BP Deepwater Horizon spill noticed a sheen near the Mississippi Canyon 20 that was linked to the 2004 disaster.

The extent of the spill emerged in 2019 when an NOAA study estimated that it was leaking between 380 and 4,500 gallons of oil per day into the Gulf.

That year, the US Coast Guard came up with a temporary fix to block the majority of the spill, although experts say a more permanent solution is still needed to bring it to a full halt.

An estimated eight million gallons of oil were dumped into the Gulf of Mexico off the coast of Louisiana and Alabama in the wake of Hurricane Katrina in August 2005.

At the time, the ten separate spills combined to form the largest to strike the US since the Exxon Valdez tanker spill off the coast of Alaska in 1989.

The two biggest spills linked to the storm occurred in southeastern Louisiana's Plaquemines Parish, a major oil hub where Katrina made landfall as a Category 3 hurricane with 125mph winds.

The other, Chevron's Empire terminal in Buras, released 1.4 million gallons of oil.

Researchers determined that some of the damage that caused the spills had been leftover from previous hurricanes and warned that future storms could lead to further destruction.

Nearly 300,000 gallons of fuel were dumped into the Mississippi River near New Orleans after a tanker collided with a barge being pulled by a tugboat on July 23, 2008.

Oil from the spill traveled more than 100 miles to the Gulf of Mexico, forcing officials to shut down the busy waterway for days.

An investigation determined that the captain of the tugboat leading the barge was not properly licensed at the time of the crash, NOLA.com reported.

The largest oil spill in history struck on April 20, 2010, after the Deepwater Horizon rig exploded and sank about 41 miles off the coast of Louisiana in the Gulf of Mexico.

Eleven workers were killed and four million barrels of oil flooded the Macondo Prospect over the course of 87 days before it was finally capped, according to the EPA.

The oil slick extended more than 57,500 square miles in the gulf and wreaked havoc on 1,100 miles of beaches in Louisiana, Mississippi, Alabama, and Florida.

The rig owned and operated by Transocean and leased by BP was found to have a faulty cement core recently installed by contractor Halliburton which failed to withstand a surge of natural gas that sparked the explosion.

The US government brought criminal charges against BP and several other defendants deemed responsible for the spill in late 2010.

A settlement was reached in November 2012, with BP pleading guilty to 11 counts of manslaughter, two misdemeanors, and a felony charge of lying to Congress.

BP also agreed to an unprecedented $4.525billion in fines as well as four years of government monitoring of its safety practices. 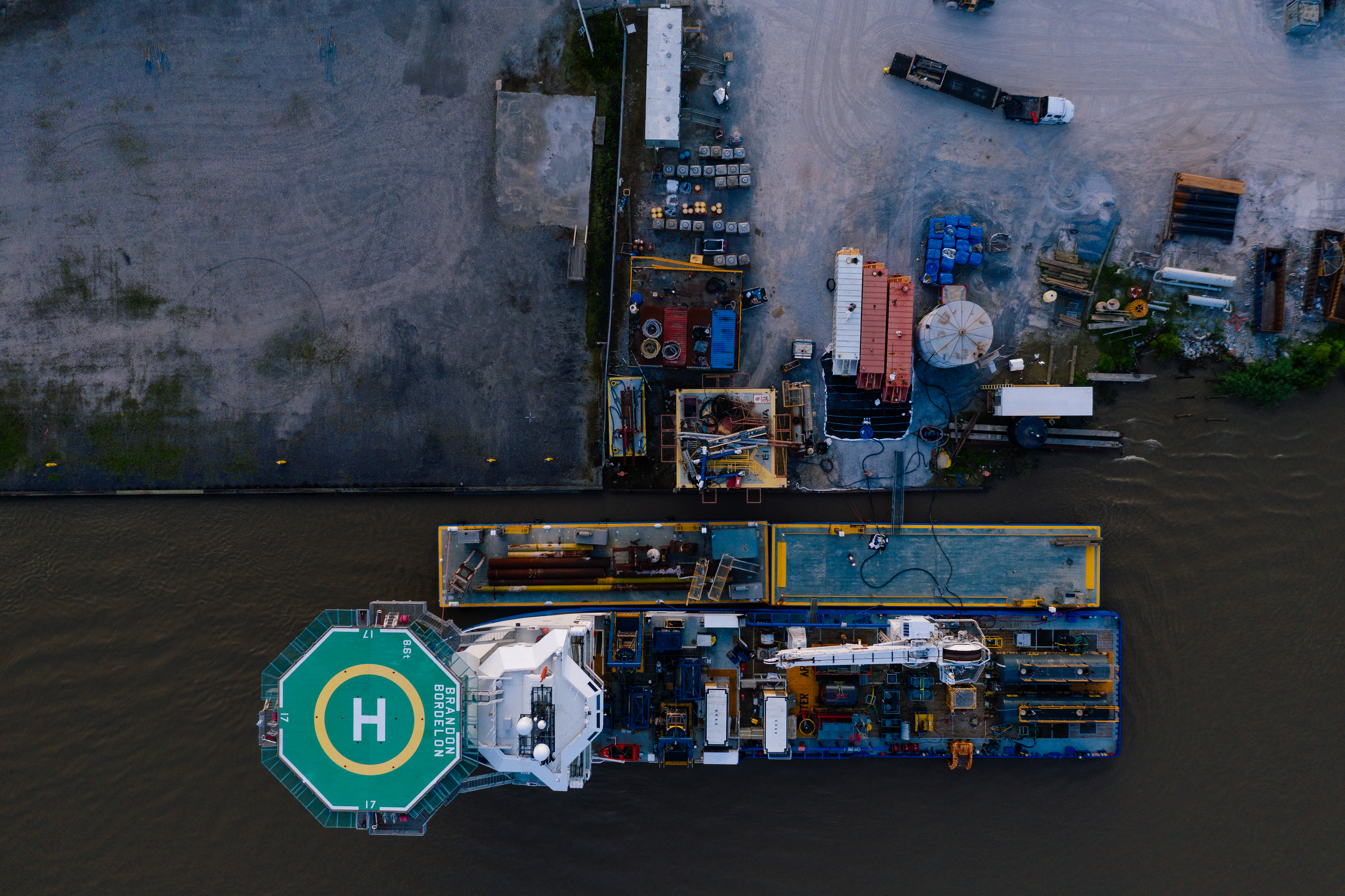