‘I’m not a slapper, I’m not hungover and I am not breastfeeding’: Labour shadow minister Tracy Brabin hits back at online trolls after they slammed her for wearing an off-the-shoulder dress in the House of Commons

A Labour shadow minister lashed out at Twitter trolls today saying she was not ‘a slapper’ after being criticised for wearing an off-the-shoulder outfit in the House of Commons.

Shadow culture secretary and former Coronation Street actress Tracy Brabin was subjected to a wave of online abuse after she wore a black dress that exposed one shoulder during a debate last night.

One Twitter user shared a photograph of her wearing the outfit and asked: ‘Is this really appropriate attire for parliament?’

In a sharply worded response posted on Twitter, she said: ‘Sorry I don’t have time to reply to all of you commenting on this but I can confirm I’m not….

‘A slag, Hungover, A tart, About to breastfeed, A slapper, Drunk, Just been banged over a wheelie bin.

‘Who knew people could get so emotional over a shoulder…’

Ms Brabin, who played Tricia Armstrong in the ITV soap between 1994 and 1997,  won her seat in October 2016, following a by-election after the murder of Labour MP Jo Cox. 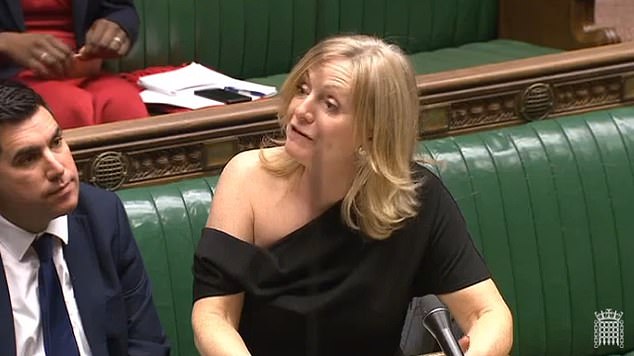 Ms Brabin was raising a point of order in the Commons on Downing Street’s decision to order senior journalists from some of the UK’s major news organisations to leave before a briefing on Boris Johnson’s Brexit plans when she spoke at the despatch box wearing the outfit.

In a further debate on the subject today she said: ‘It is concerning that Boris Johnson seems to be resorting to tactics imported from Donald Trump to hide from scrutiny.’