One side-effect of surviving two years in two of Iran’s most infamous prisons, much of it in solitary confinement, is that Kylie Moore-Gilbert is more than comfortable in her own company. The Melbourne academic, whose plight made global headlines, gives every impression of thriving in it.

Eight months on from the prisoner-swap that secured her return after being sentenced to 10 years on espionage charges she denies, the 34-year-old is living a “calm and settled” life in the leafy quiet of the Dandenong Ranges, outside Melbourne. 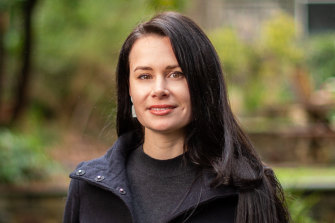 Kylie Moore-Gilbert is adjusting to being back home in Melbourne and is focused on a “calm and settled” life.Credit:Scott McNaughton

Dr Moore-Gilbert is spending her days writing a book about her experience, which she says is helping her close a psychological chapter.

“I came out and I thought, ‘When’s the PTSD going to kick in?’ These things take time to settle, so actually it would be unusual if I came out of prison and started having PTSD straight away.” 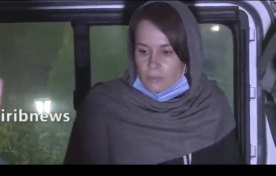 She is enjoying the company of friends, some of whom she made after they lobbied as strangers for her freedom. After ending her marriage to Russian-Israeli Ruslan Hodorov, she is also dating again – though not keen to elaborate.

A board member of Hostage Aid Worldwide, which lobbies for the release of others imprisoned unjustly, Dr Moore-Gilbert says she is uncertain if she will return to an academic career and has not gone back to Melbourne University.

She says while it is still early days, she is “trying to regain a sense of normality again”.

“I am a very resilient person and a very independent person and I was before I went to Iran,” Gosford-born Dr Moore-Gilbert says. “Obviously what happened to me in Iran emphasised that further. I spent a lot of time alone in solitary confinement so I’m used to being alone, and it’s comforting to me to live alone in a way.”

Dr Moore-Gilbert has enough distance on her incarceration to be able to describe with precision the transition from believing you are about to return to your new husband, your recently-bought home and your “dream career” to accepting you are in for a long haul in a foreign jail. It is “a period of grief, a period of just utter disbelief: your brain refuses to accept it,” she says.

“This for me went on for several months. When I understood they’re passing my file into the judiciary system and I’m going to court, at some point my brain could not compute. I just did not understand that because I didn’t have any understanding of the Iranian judicial system.”

Fellow prisoners put themselves in danger to offer her information about how to conduct herself in court.

“At the beginning you feel very weak and feel like you would just give in to whatever they want of you. Because you don’t have any power. After I learnt the lay of the land and the rules of the place, due to the help of other prisoners … and through my own experience, I understood the best form of defence was attack and not to sit back and do what they want – but to draw a line and say ‘I’m going to react badly if you cross this line’,” she says.

“In terms of assault or bullying by other prisoners or prison guards or interrogators, if you made it very clear you would lose your shit if they crossed a certain line, they would quickly decide not to do that because it would be too much of a headache or a hassle for them.” 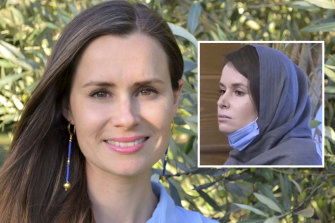 Kylie Moore-Gilbert was in prison in Iran for more than 800 days. Credit:AAP

She was able to leak some letters describing her torment during long periods in solitary confinement. But she says after six months, she was given a newspaper and a grammar book for the Farsi language, which she spent up to five hours a day studying. She says this helped save her sanity.

“At the beginning I thought, ‘this is going to end soon’. I thought ‘I’m going home, this can’t possibly go on for two years and three months’. I had no idea I could be convicted and sentenced to prison, I thought they would release me once they finished their questions and realised that obviously I am innocent or the Australian government would get me out. I didn’t think I’d be there long enough to learn the language.”

“I wanted to learn it anyway but it was clear it was a necessity to survive if I wanted to not be weak and vulnerable and let other prisoners, guards or interrogators take advantage of me and use my lack of understanding against me, if I wanted to get things for myself or argue my point, or ask for basic sanitary items and food.” 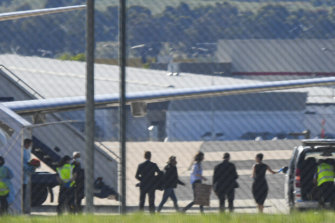 Passengers, including one believed to be Dr Moore-Gilbert, leave a government jet at Canberra Airport in November 2020.Credit:AAP

Though she stresses her focus is looking ahead, it does not escape Dr Moore-Gilbert that had she not had one particular conversation, the course of her carefully-crafted life may not have been so dramatically altered. Even now, she is not sure what she said to a man, with whom she was discussing the situation in Bahrain, that was used against her.

“I know if I hadn’t have spoken to that individual at all, I wouldn’t have been arrested… It’s possible he dobbed me in as a scapegoat to get himself out of trouble. I wasn’t interviewing Iranians, and I wasn’t talking about Iranian politics or asking him about Iranian politics or anything that is sensitive. I was just extremely unlucky, really, really unlucky that it happened,” she says.

“It could have been that if we sat and spoke about Hollywood movies for half an hour he still would have done it.”

The Revolutionary Guards told Dr Moore-Gilbert that they had arrested the man and in the process of his arrest she was identified. “They probably analysed messages from me in his phone and asked who this foreign woman is you’ve been talking to. Either he dobbed me in as a way of getting out of his own arrest situation or he was working for them from the beginning and that was a lie. I don’t know.”

She denies point blank the spying allegation, which commentators have suggested may have been made because her then-husband was Israeli. “Anybody who looks into it in any great depth will see that the whole thing is laughable and I am absolutely not a spy,” she says.

However, “prison teaches you how to be criminal”, she says. “I’m a much better thief than I was, I’m much better at getting information out ot people than I ever thought I would be. The dodginess factor in terms of how to operate … you have to just to get by. The things I’ve learnt from other prisoners!”

In the public prison to which she was transferred at one point, an Afghan drug smuggler sat her down to teach her the theory of smoking a crack pipe (no pipe involved), how the smuggling operation works on the Iran-Afghanistan border and how much the product can fetch on the streets.

Despite her comfortable repatriation, it’s not surprising to learn Dr Moore-Gilbert still feels that “in some ways my head is still stuck in Iran”. Many Iranian and foreign friends of the British-Australian academic still languish in the Revolutionary Guard Corps’ Evin Prison in Tehran. She checks in daily with their family members and friends and is heavily involved in efforts to get them out.

“That’s a good and a bad thing for me in terms of my recovery but it’s my duty to be [in touch with them] and I want to be so.

She is part of international efforts to have Magnitsky laws – which enable governments to sanction individuals in foreign countries who commit human rights abuses or corruption – applied to Iranian officials including Abolqasem Salavati, the Iranian Revolutionary Court judge who gave her a 10-year sentence after a secret trial in which no evidence against was presented.

But for every “psychopath” she encountered, Dr Moore-Gilbert says she met 100 Iranians who were supportive, generous and willing to put themselves at risk to help her. Some of female guards, who held fast to Islamic doctrines on respectful treatment of women, reported on male colleagues who failed to do so, she says, which is one reason she still feels much warmth for the people of Iran.

“People say to me, do you hate Iran and I say absolutely not. No one could hate Iran when they receive that much love and care and assistance and support from people inside the prison, and not just fellow prisoners, some were Revolutionary Guards.

“It’s not all black and white, they’re not all evil. I really love the Iranian people and it breaks my heart that I can never go back, until this regime falls at least.”