A YOUNG mum has told how she feels like a prisoner in her own home and is too terrified to go outside in a city’s “worst street.”

Chloe Fitzjohn hides in the “safety” of indoors with her two little girls – one-year-old baby Crystal and Annalise, four – petrified to leave her four walls.

The single mum has been begging the council to move her, saying: “I just want to get out of here but it’s impossible. It’s like being in jail. I’m trapped."

Chloe, 23, spoke out after a tormented family revealed they were so desperate to flee the notorious Neston Gardens in Leicester, that they offered another tenant elsewhere £5,000 to switch homes with them.

But the sum was turned down for not being nearly tempting enough to endure the hellish conditions on the street.

Chloe told The Sun Online of the crime that is rife on her doorstep in the large “slum-like” cul-de-sac street, nestled away on a council estate three miles south of the city centre.

She said: “You really wouldn’t want to live here but I have no choice. We live in fear.

“I heard about the family offering to pay to swap homes in a different neighbourhood.

“If I had a spare five grand I’d offer it to someone else to exchange and move out but I’m skint!”

Chloe, who has lived in her one-bed ground-floor flat for nearly five years, told how she has been subjected to racial abuse and has been threatened by potential intruders.

She has begged the council to transfer her and her two young daughters, but her pleas have been in vain.

Most alarmingly and recently, she says her eldest child was subjected to a horrifying experience as she was playing outside with her pals.

Two boys who live in the street allegedly pulled down her underwear, leaving the young girl traumatised.

Chloe said: “My daughter got chased by two boys who dragged her down and pulled down her pants. She had been playing with her girlfriends who went in for tea and then it happened.

“She came screaming to me saying her knickers had been pulled down and was in a real state.

“I later spoke to the mum of the boys and she apologised for them and tried to assure me it would never happen again.

“I didn’t call the police but I should have. I’m sorry I didn’t.

“We get all sorts of abuse here. My kids and their dad, who I’m split up from, are Irish travellers. People shout: “We don't want you lot here, go home.”

Benefits mum Chloe continued: “I’ve been targeted while sitting inside.

“Thugs in hoodies have banged on my window with planks of wood and then disappear if they've seen any lights on or movement, and then gone on to a neighbour’s place.

“It’s terrifying. I am too scared to go outside."

Our reporter caught up with Chloe as she was huddled up inside on a wide window sill next to her eldest daughter.

The pair were gazing out of their front lounge window, too worried to step outside or even answer the intercom door.

Her baby was standing on the floor, full height, and longingly gazing out.

Speaking through a large opened window, she said: “I’d love to be outdoors but me and the kids are stuck. It's too dangerous in our street with constant drugs and fighting and abuse.

“I’m trapped inside my own home. I can't go out, it’s impossible to go out. It’s like a slum, it’s got to be one of the worst streets in the city.

“I’m a single mum and I feel safe inside but it’s like being in jail. I can't let my kids out unsupervised after what happened to my eldest. 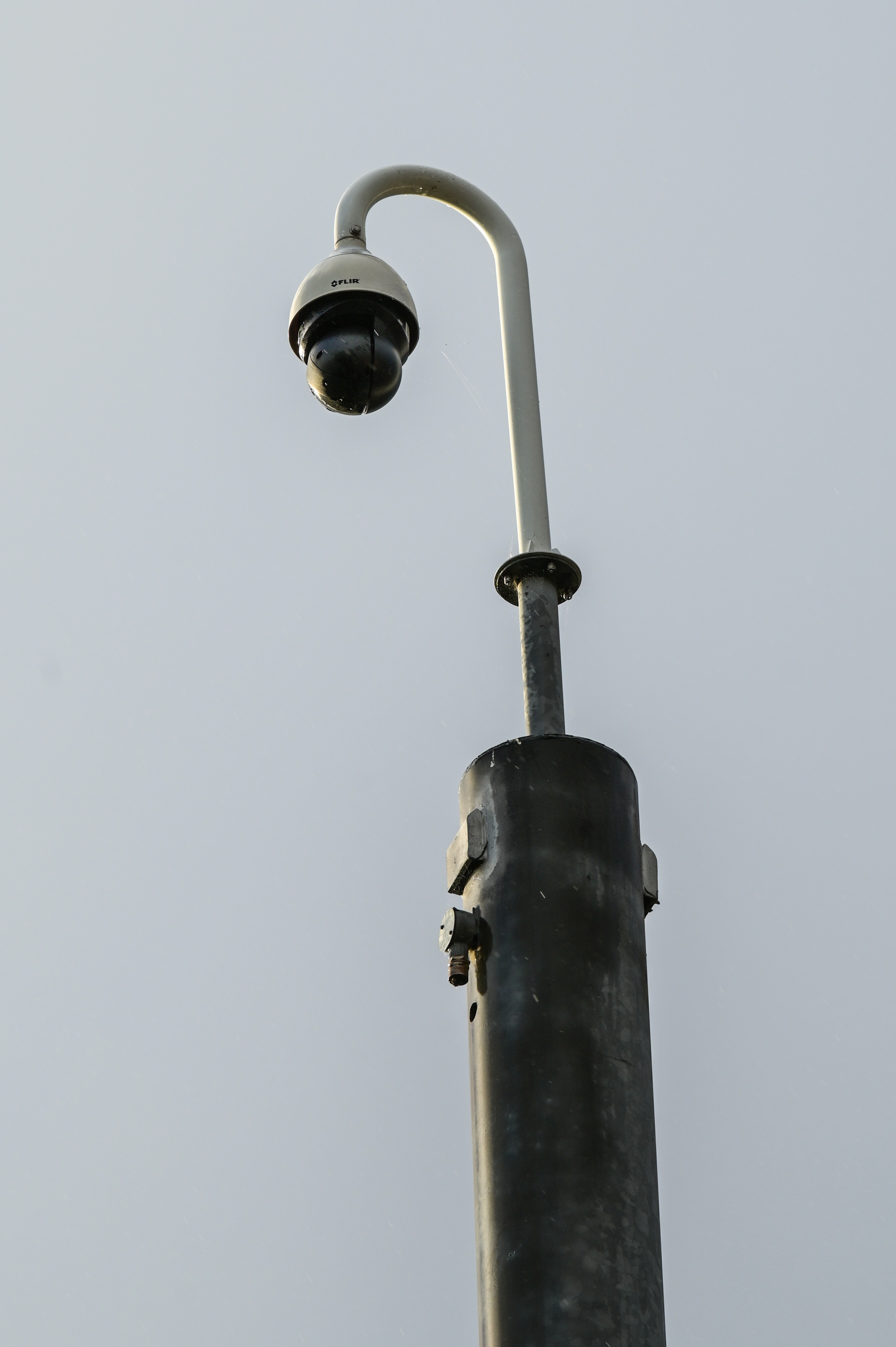 “It's very nice and comfortable inside and we need to feel safe but we feel trapped," Chloe said.

“Residents and their mates do drugs on the streets, they get rowdy and start fighting.

“It's not a great place for families but there is loads of families here with young kids and of all nationalities – British, Eastern European and Asian.

“I fear me or my kids will get hurt or burgled and verbally and physically abused. I had to take this flat in February 2017.

“The council put young families here who don't belong here with all the drugs and abuse outside.

“I think the whole estate should be knocked down and re-built. Parts of it where all the flats are at the back are like a slum with rubbish, and rudeness and random weird people coming and going."

Residents and their mates do drugs on the streets, they get rowdy and start fighting.

In another home on the opposite side of the extensive street, a grandmother and her daughter reside – much to the concern of the rest of their family out of the area.

Gran Daphne, speaking to The Sun Online as she was wheeling back from a shopping trip, continued: “A bad street? No, it’s not bad, it's awful but we're stuck here with nowhere else to go.”

Daphne frustratedly told how she had the expensive cover stolen from her much-needed mobility scooter, that was parked in her front drive.

The theft was captured on CCTV from a neighbour’s home but she claimed cops had been unable to make an arrest.

She said: “It was parked in my drive and I swear they would have nicked the machine if they could have but the keys were inside.

“My neighbour living right opposite caught the theft on camera and shared the image with us."

Daphne’s 20-year-old granddaughter, who was visiting her gran, said: “Were shocked and saddened that someone could blatantly steal a cover from a pensioner's scooter and police didn't care one bit.

“The place is full of crack heads. I’d never live here and I worry for my gran. Police are often called here and do regular patrols but they seem to be ineffective.

The triangular street is jam-packed with hundreds of council homes in the Aylestone suburb that has been on Leicestershire Police radar for many months.

Litter is strewn, stolen supermarket trollies brimming with junk are seen lined up in back gardens, and crime is commonplace.

It is a haunt for drug dependents too. During the summer, two were shockingly pictured "frozen like zombies” on a public bench.

One resident told of witnessing extreme violence on a regular basis and she once saw an offender being tasered by police.

She says people defecate in communal stairwells, describing the place as "a s*** hole!”

"There's often a lot of people drinking outside. I wouldn't say it's bad all the time, but you often hear shouting. There have been fights and stabbings.”

The 38-year-old woman, who declined to be named, added: “Some of them are using that drug that puts users into a stupor that can last several hours.

“The problem for me is that those same people are alcoholics too so when they're not on mamba they're drunk and noisy.

"I've lived all over the place and I've never known so much violence and s*** happening in one place.

"One family this week told their local paper how they had tried to bribe another tenant in another street to swap homes.

"But the other person told them he would not move to Neston Gardens if they paid him twice as much, at least £10,000."

The parents and their two children aged six and seven, claim they were bombarded with racist abuse, shouted through their own window.

They have to keep their children indoors because of the rampant drug use and regularly come across human poo in the communal hall.

The dad, 35, who declined to be named, reportedly said: "I can't explain what it's like here – it's like living in a slum.

"We've been here for seven years and now our children want to be playing outside but we don't want them going out there- there's the smell of drugs everywhere.

"We're very worried about being here at all and we need to move. We suffer every torture."

"I've been asking for a swap, looking to move out for two or three years. I offered one person £5,000 to swap flats with us.

"No one wants to come to Neston Gardens. We've no way out."

However, an NHS worker and mum of a 14-year-old daughter defended her street, insisting: “It's not that bad. I’ve lived here for eight years and my brother has too in another house.

“All my friends have been saying I’m living in the worst street in Leicester and have expressed concern but I’ve not had any bad experiences.”

The mum, who declined to be named, admitted to The Sun Online: “There is a problem with drugs and anti-social behaviour but I'm sure there are places a lot worse.

“People say hello and if it was really that bad I’d have moved out because I have a teenage daughter to think about.

“There’s a primary and secondary school nearby and a nice park so it’s not all bad.”

As the mum spoke out from her drive, two lads – pointed out by other residents as “druggies” – sauntered past.

A Leicester City Council spokesperson said: "We are aware of problems with anti-social behaviour (ASB) in Neston Gardens and have taken positive action to tackle these.

“In response to previous reports of ASB from other residents, we have been working closely with partners, including the police, to take enforcement action and make improvements.

“A door-to-door exercise was carried out with the police in this block to identify issues and we will continue to meet regularly with local residents to develop and bring forward further improvements to the area.

"We were very concerned to hear that these tenants were experiencing these problems and we hope in future they will feel able to report them directly to us.

"We have since spoken to the family to provide support and offer reassurance to them that we take any complaints of this nature very seriously and will act quickly and appropriately.

"We will explore what else can be done to support this family and to ensure residents do report incidents to us when they occur."