Week-long exercises in the Strait of Hormuz and the Sea of Oman will include Iran’s first submarine-launched missiles. 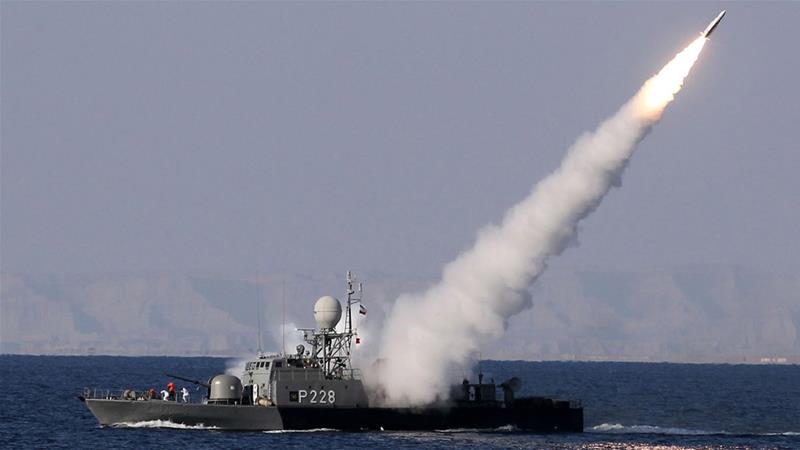 The Iranian navy launched “large-scale” drills in the Strait of Hormuz and the Sea of Oman in a show of its maritime force amid escalating tensions with the United States in the region.

Rear Admiral Hossein Khanzadi, commander of Iran’s navy, said the manoeuvres began on Thursday and will run for a week. For the first time, the exercises will feature missiles launched from a submarine.

The Fateh is equipped with torpedoes and a precision-firing system, and is able to stay underwater for up to five weeks, according to the navy.

The US and its allies in the Gulf region have repeatedly denounced Iran’s military as a threat to the region. But Tehran said its military is for defensive purposes only.

‘Unsafe for the enemy’

Khanzadi also said missiles with different ranges will be launched from warships during the exercises.

“For the first time, these weapons will be tested seriously and we can make the maritime region unsafe for the enemy in any way possible,” Khanzadi said.

Naval activities will begin 2km from the Strait of Hormuz and extend 10 degrees north of the Indian Ocean, Khanzadi was quoted by the Mehr news agency as saying.

The naval exercises will include how to deal with external threats, as well as an assessment of naval equipment, naval preparedness, accountability and readiness in open waters, according to the news report.

The drill, named Velayat 97, will include battleship exercises and amphibious and anti-amphibious warfare manoeuvres.

In January, Iran held a joint naval exercise with Russia in the Caspian Sea, and carried out separate ground and aerial drills in which air force jets, domestically manufactured rockets, and anti-radar and thermal missiles were put to the test.

The exercise in the Strait of Hormuz is an annual drill so there is “nothing surprising”, according to Ghanbar Naderi, a Tehran-based defence analyst and journalist who has covered previous military war games.

“There is nothing exceptional about this annual event,” Naderi told Al Jazeera. “But of course, this year it takes on a different significance because of the economic warfare that the country is facing.”

“The whole idea is to test the readiness of the armed forces. This should not be interpreted as a threat to regional security,” he added.

The US pulled out of the historic 2015 nuclear deal with world powers and reimposed punishing sanctions on Iran last year. Since then tensions have escalated between Washington and Tehran.

With additional reporting by Ted Regencia