Female football fans have been attacked in Tehran while trying to watch the Iran versus Syria men’s friendly last night.

Guards from the State Security Force ‘kicked and punched’ the women after they tried to enter the Azadi Stadium in the country’s capital.

They had been able to buy tickets for the match online despite being banned from attending. 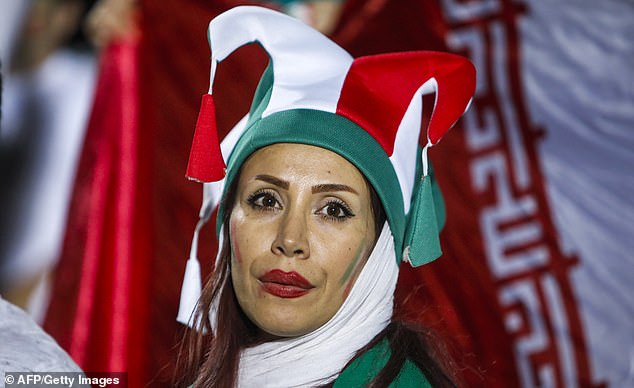 Female football fans have been attacked in Tehran while waiting to watch the Iran versus Syria men’s friendly last night. Pictured: An Iranian woman football supporter wearing a jester’s hat with her country’s colours stands before a national flag during a screening of the Russia 2018 World Cup Group B football match between Iran and Spain in Azadi stadium in the capital Tehran on June 20, 2018

The Iranian Football Federation spotted the ‘technical error’ a day later and blocked the country’s women from buying any more.

But Syrian women were still able to and entered the ground unscathed.

It is understood that at least two Iranian women were arrested and taken into custody but it is unclear what will be done with them, the women’s committee of the National Council of Resistance of Iran said. 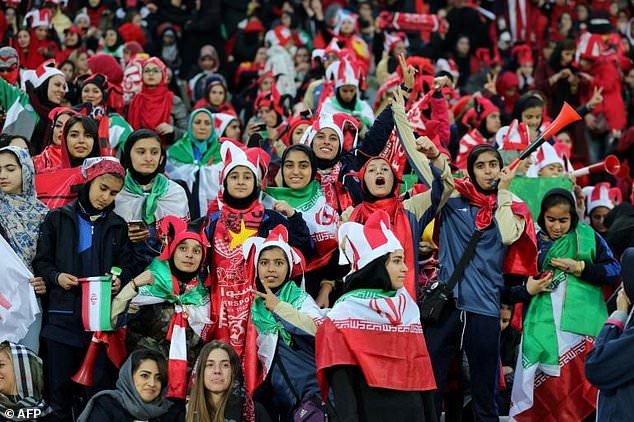 Guards from the State Security Force ‘kicked and punched’ the women last night after they tried to enter the Azadi Stadium in the country’s capital. Pictured: The Persepolis versus Kashima Antlers match in November

State-run daily newspaper Etemad interviewed some of the women who were attacked and they spoke of their ordeal.

One woman said through tears: ‘One of the troops placed his foot on the chest of one of the ladies, took away her cellphone, and tore away her purse.

‘The security forces attacked us in a raid and dragged one of the ladies on the ground.’ 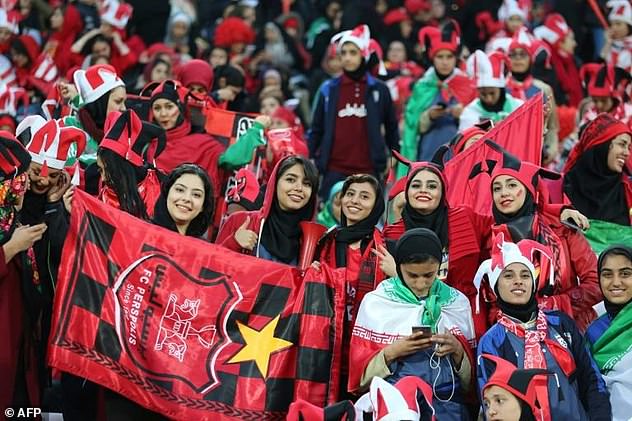 The female supporters had been able to buy tickets for the match online despite them being banned from attending (pictured, last year’s Asia Champions League final last year)

Another victim added: ‘They kicked us, punched us, and swore at us, without our doing anything wrong.

‘There were several of us, women, who were waiting on the lawns outside the west gate of the stadium. 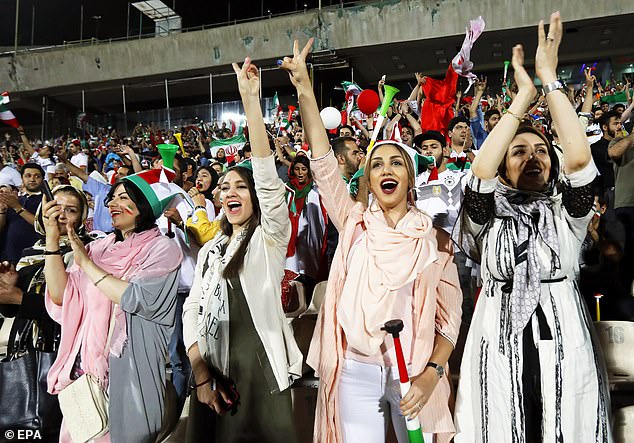 Mansoureh Mills, an Amnesty International Iran researcher, told the Independent: ‘Once again the Iranian authorities are persecuting women simply for their love of football.

‘For decades, the Iranian authorities have banned women from football stadiums – with dozens of women arrested trying to enter stadiums to watch football matches in the past year alone.

‘The Iranian authorities should remove these discriminatory bans and allow women and girls to freely access sports stadiums without fear of violence and arrest.’ 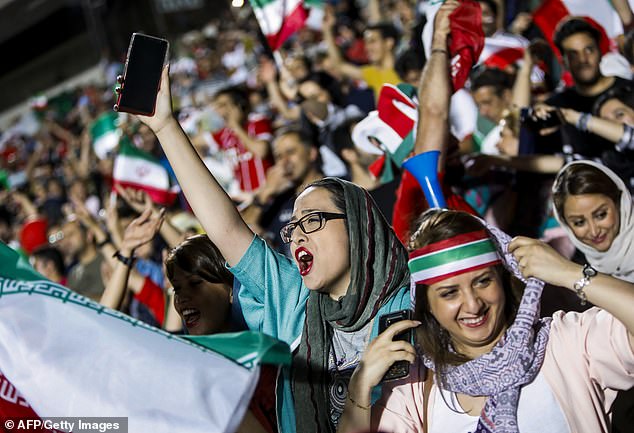 It is understood two Iranian women were arrested and taken into custody but it is unclear what will be done with them, the women’s committee of the National Council of Resistance of Iran said

It said the men attacked them and shouted abuse during the brawl in Shiraz on May 25.

FIFA has warned Iran about its oppressive behaviour towards the country’s women, with female footballers not getting any sponsors or support – as well as no television airtime. 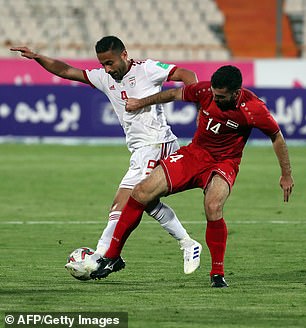 It even emerged in some reports that 500 CCTV cameras had been put up outside the Azadi Stadium to spot and stop women entering – as some were trying to pass off as men.

Iranian women do not normally have to wear the hijab, but female sport stars do.

The incidents came during the build up for the Women’s World Cup, which kicked off in France on June 7 and saw worldwide calls for inclusivity in the sport.

No countries from the region will be among the 24 teams taking part in the tournament in France, despite Iran’s ladies winning the Asia championships.

But there are signs of flexibility in the region towards a sport igniting female interest across the globe.

In Iran, rules have been relaxed since the 1979 Islamic revolution and women are selectively allowed to attend some matches.

But the fact that a ban has yet to be officially lifted indicates there is still disagreement over the issue among senior figures in the Islamic republic. 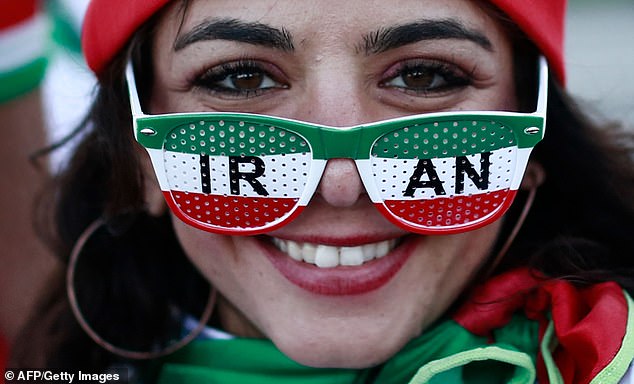 FIFA has warned Iran about its oppressive behaviour towards the country’s women, with female footballers not getting any sponsors or support – as well as not getting television airtime

Rules banning women from football games were introduced by religious leaders concerned about public morals and the risk to women of unwanted attention from men in the crush to enter and leave the stadiums.

Yet exceptions have been made: A handful of Irish women became the first females permitted to watch a match in Islamic Iran when they were allowed to attend a 2001 World Cup qualifier between a visiting Ireland team and the hosts. 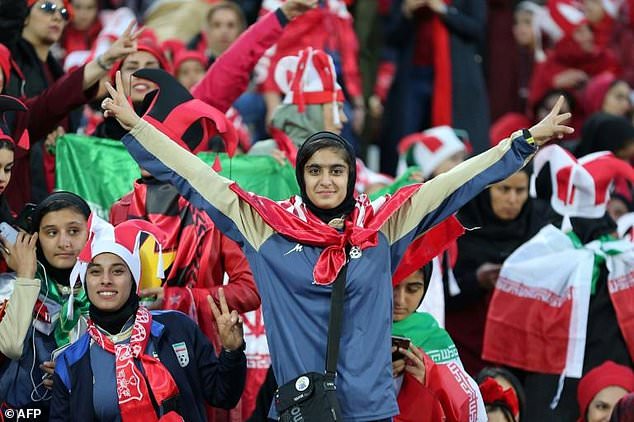 The women had to show up two hours ahead of kick-off, entering well before the men and go in to their own separate section of the stadium.

A limited number of women were also permitted to watch Iran’s men’s games in the 2018 World Cup on a giant screen erected in the capital, Tehran.

However, as women’s football is expected to draw huge attendances at the World Cup in France, Iranian women still face challenges with their attendance at matches remaining controversial.

Apart from Saudi Arabia and Iran, no other country in the region actively bans women from attending football matches but female football followers are generally in a minority.