Israel bans its citizens from travelling to Britain, Denmark and Belgium from Wednesday due to spread of Omicron

Israel is banning its citizens from travelling to Britain, Denmark and Belgium from Wednesday due to the spread of the Omicron variant.

A senior Israeli health official told a news conference of the latest travel restrictions in the country.

Sharon Alroy-Preis, head of public health at Israel’s Health Ministry said the three countries are being placed on the ‘red’ list because of the ‘significant’ spread of the Omicron variant.

Since the Omicron variant was discovered, some 50 countries have been placed on Israel’s red list, mostly in Africa.

Health officials said there have been 55 confirmed cases of Omicron in Israel. 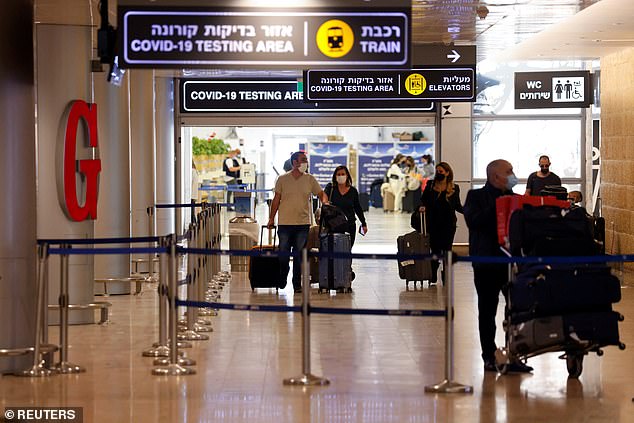 Israel is banning its citizens from travelling to Britain, Denmark and Belgium from Wednesday due to the spread of the Omicron variant (file image). Pictured: Travellers exit the coronavirus testing area at Ben Gurion International Airport in Israel

The country has been trying to accelerate its vaccination drive as around 1 million people have refused to get vaccinated.

It was also decided that Green Pass restrictions in the country would be introduced at shopping centres, meaning unvaccinated Israelis cannot enter.

The Prime Minister Naftali Bennett is facing calls to impose tougher restrictions in Israel over the coming days.

It comes after the spread of the virus yesterday hit a three-month peak and the R-number climbed to 1.1.

Fears are growing that there will be a wave of Omicron in Israel.

Previously, Israel imposed a two-week ban on foreigners entering the country in late November in an attempt to stem coronavirus infections.

And Israelis entering the country, including those who are vaccinated, are required to quarantine.

The country also brought back counter-terrorism phone-tracking technology in a bid to crack down on the Omicron variant.

The Shin Bet counter-terrorism agency’s phone-tracking technology is used to locate carriers of the new variant in order to curb its transmission to others, Bennett said in November.

Used on and off since March 2020, the surveillance technology matched virus carriers’ locations against other mobile phones nearby to determine with whom they had come into contact.

Israel’s Supreme Court this year limited the scope of its use after civil rights groups mounted challenges over privacy concerns. 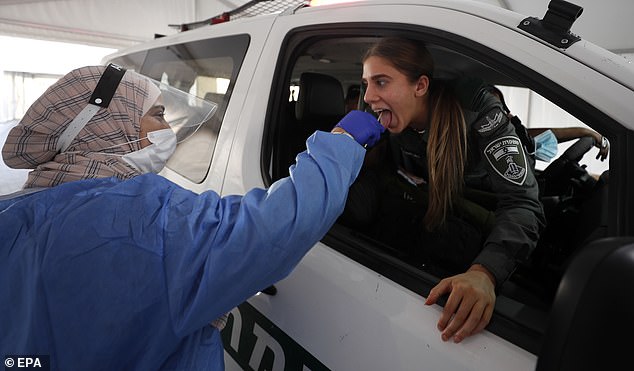 Health officials said there have been 55 confirmed cases of Omicron in Israel. Pictured: A woman at a mass testing site in east Jerusalem in late November