Italian PM says deal reached with several countries to take in the 47 people, who had been at sea for 10 days. 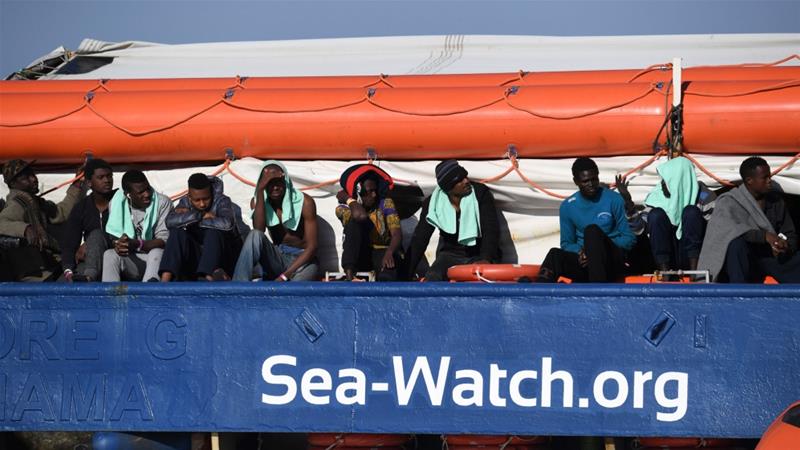 Italian Prime Minister Giuseppe Conte has said a group of 47 rescued refugees and migrants will be allowed to disembark the Sea-Watch NGO vessel they had been on for 10 days.

Conte said Italy reached a deal with several countries to take in the group, which was rescued from the rubber boat off the Libyan coast.

On Wednesday, he said Luxembourg and Italy would also welcome some of them.

Among those rescued are at least 13 minors and their stay at sea had taken its toll on them, the Sea-Watch crew said.

In a response on Twitter, crew members of the ship, which flies the Dutch flag but is run by a German NGO, said they were happy with the decision but that “Europe should feel ashamed” about what had happened.

“We are happy for our guests, that their ordeal now comes to an end, but it remains a shameful day for Europe,” chairman of Sea-Watch, Johannes Bayer, said.

“The EU pretends to be against human trafficking, but what else is it if they always haggle for weeks about the redistribution of a few tens of shipwrecked,” Bayer added.

“Such questions have to be solved on land, once the people are safe.”

In recent days, the discussion about those stuck on the Sea-Watch 3 reached a high point when Italy refused to let the people ashore unless the Netherlands and Germany promised to take them in.

However, the Netherlands said it did not think it was its responsibility to take care of those on board, adding it was important to distinguish between “genuine refugees and economic migrants”.

Earlier this month, 49 refugees, including a baby and several children, were in a similar situation when Italy refused to let two rescue ships into its harbours.

In an attempt to stop rescue ships from bringing in those that try to make the perilous journey from the North African shores to Europe, far-right Italian Interior Minister Matteo Salvini has threatened to take legal action against the ship.

Since a populist coalition took power in Italy last year, Rome has denied rescue vessels right to dock in its ports.

The country has repeatedly closed its ports to rescue ships, which led to rescue organisation MSF ending rescue efforts onboard the Aquarius ship

The Aquarius, operated jointly with SOS Mediterranee, assisted nearly 30,000 people in international waters between Libya, Italy and Malta since it started in February 2016.