It was a moment of relief for Mr Berne and the 15 staff of Hit the Road Tours after relying on JobKeeper and state government grants since July's second lockdown.

There were complications to work through, of course: COVID-safe compliance (no problem), the absence of international day trippers (could Melburnians fill the void?) and finding out the status of other businesses along the Twelve Apostles route. 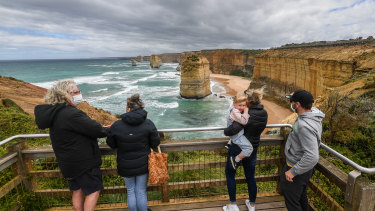 Locals Colin and Jean Dillon with daughter Marnie Fitzpatrick, her husband Charlie and their toddler Mable at the unusually quiet lookout at the Twelve Apostles last week.Credit:Justin McManus

These matters considered, Mr Berne planned to resume his tours next weekend.

Then, on Wednesday, he received advice that tourists were not allowed to sit together in the mini-van any longer than 30 minutes, ending any hope of day tours out of Melbourne.

"I just received a couple more bookings this morning. But we will have to cancel," Mr Berne told The Sunday Age minutes after getting the news. "We know it’s frustrating for them as well. We’re still waiting for further instructions."

Mr Orlando's emotional and financial merry-go-round – cautious optimism, disappointment, anxiety, "light at the end of the tunnel" – was not out of place along Victoria's most visited regional attraction, according to Liz Price, the general manager of Great Ocean Road Tourism.

Melburnians are out in massive numbers for the first weekend since travel restrictions lifted in Melbourne and operators were hopeful, Ms Price said, but the market mechanics of the region were complex and intertwined.

Among the unknowns: would the influx of wary Melburnians take the time to book restaurants, or just picnic in the park? Would they stay a few nights, or drive home in the afternoon?

Some accommodation providers had reported a spike in self-contained rooms, the sort where you can cook your own meals, Ms Price said. Others had experienced unusually strong mid-week bookings as Melburnians catch on to the idea of work-from-home by the beach.

Booking and foot traffic on the eastern side – towns closer to Melbourne, such as Torquay and Lorne – had been relative strong, but Apollo Bay, the Twelve Apostles, Port Campbell and Warrnambool were "still very far behind".

"There are three things that are missing: We don’t see interstate yet, we don’t have international and we’ve had significant event cancellations. And there’s no clear pathway for events yet," Ms Price said.

A report commissioned by GORT last month showed 200 businesses along the road were at risk of going bust by June next year and a worst-case scenario 6400 jobs were on the line.

Felix Yee from the Twelve Apostles Motel said they had lowered room rates to attract the first wave of escaping Melburnians. This had helped fill their weekends through to January and push mid-week bookings to 70-80 per cent, but it had come at the cost of profitability.

"Our main guests were coming from China and we could have higher room rates," he said.

"We lost that part of our business and so we have to stay at a very basic level just to maintain ourselves." 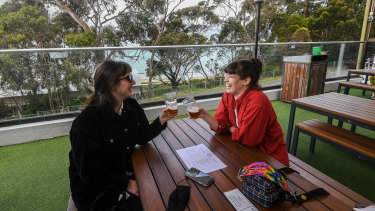 But Melburnians were doing their responsible best. Natalie Tarzia and Katherine Marshall were COVID-19 tested "just in case" and drove to Lorne when their results came back negative.

They have made a point of staying multiple nights and eating out at local businesses.

"We've just seen it get busier and busier," Ms Marshall said on Friday.

"Right now, the car park [at the Lorne foreshore] is quite full. There were probably only five or six cars here yesterday."