Civil servants are warned they face ‘compulsory redundancies’ as Jacob Rees-Mogg plans to slash the number of workers in Whitehall by 91,000

Civil servants may face compulsory redundancies as part of measures to reduce the number of officials to pre-Brexit levels.

In a leaked document seen by the Times, up to 40 per cent of workers in some government departments could be dismissed as part of Jacob Rees-Mogg’s plans to cut the number of civil servants by 91,000 in the next three years.

The report, sent to Whitehall departments, says that as a result of the cuts, some government activity will be ‘deprioritised’.

It says departments should put forward plans for three scenarios – cuts of 20 per cent, 30 per cent and 40 per cent by March 2025.

The document also suggests departments and agencies will have to plan for cuts and asks officials to alert higher-ups if there will be considerable impacts on government policies such as levelling up.

It states: ‘All civil servants within your departmental group are in scope, including those working in executive agencies and non-departmental public bodies.’ 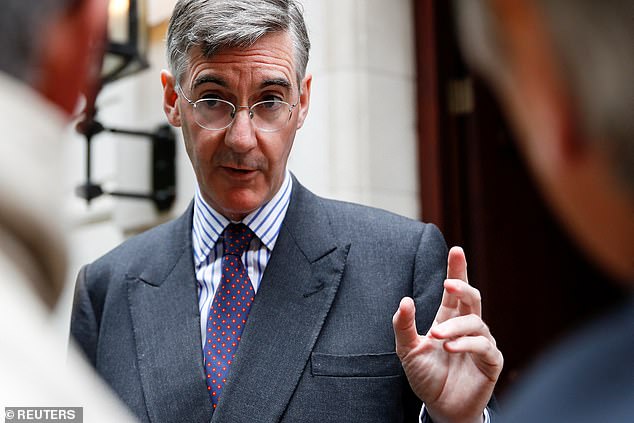 In a leaked document seen by the Times, up to 40 per cent of workers in some government departments could be dismissed as part of Jacob Rees-Mogg’s plans to cut the number of civil servants by 91,000 in the next three years. (Pictured: Jacob Rees-Mogg speaks to journalists in Westminster on June 6, 2022)

Speaking in Blackpool yesterday, Prime Minister Boris Johnson defended the plans and said they would not affect the delivery of public services.

‘It cannot be right that the size of central government has increased by 23 per cent since 2015,’ Mr Johnson said.

‘I believe we have the best civil service in the world but in view of the pressures on families, we must now find efficiencies and prune Whitehall back to the size it was only five or six years ago.

Something we can achieve without harming public services.’

The plans have been met with hostility in some departments.

Meanwhile, a group of senior civil servants have pushed back against Mr Johnson’s ‘bonkers’ proposal to scrap the fast stream programme for a year.

According to the Telegraph, permanent secretaries – the officials leading each government department – have expressed deep disquiet and are pressing Cabinet Secretary Simon Case to scrap the plans.