A former community support worker sexually assaulted a vulnerable teenage boy weeks after using a state government database to search for information about him.

Alexander Jones, 32, was jailed on Monday for six years after violently assaulting the boy, then 13, in a Geelong hotel room in May 2018.

Jones met the boy in central Melbourne when Jones asked him for a cigarette and as a former mediation worker with Melbourne City Mission, later used the Department of Health and Human Services database in an attempt to find the boy’s file. Jones left Melbourne City Mission in 2017 but his log-in details for the database had not been cancelled. 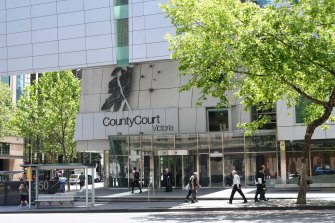 The County Court heard Jones did not find any information about the boy on the database, but the pair made contact through Facebook, which enabled the man to begin grooming the boy in what judge Scott Johns described as “predatory behaviour”.

One night Jones bought the boy food and they slept in the man’s car, and several weeks later they went go-karting and to a hotel room, where they drank alcohol and smoked cigarettes.

Judge Johns said Jones had the boy expose himself during a game of “truth or dare” and that night sexually assaulted him on the bed. Afterwards, Jones drove him to a train station.

The boy told police the assault was “the worst thing he has felt”, the judge said. Months later, the boy had a “meltdown”, the court heard, and told a family member he had been raped.

Jones pleaded guilty to sexual penetration of a child under 16.

Judge Johns said Jones’ offending was extremely serious and had a grave impact on the boy, who descended into drug abuse.

“The protection of children in our community from predatory behaviour such as yours is paramount,” the judge told Jones, who appeared via a video link from jail.

“The victimisation of children from sexual violence is extremely damaging and the effects are often life-long.”

Jones is an Indigenous man who experienced a childhood of neglect, violence and disadvantage with parents who abused drugs and alcohol. He was later sexually abused in foster care and as a homeless teenager.

He developed drug and alcohol addictions but Judge Johns said it was to his credit he completed a year 12 equivalent and had a good work history and spent a long stint sober.

The judge ordered Jones serve a shorter-than-usual non-parole period, of three years and four months, given his limited criminal history, his guilty plea and reasonable prospects for rehabilitation.

Jones, who no longer has a connection to his Indigenous community given his crime, has already served almost two years of his sentence.