Former Cabinet minister James Brokenshire has discovered how his wife’s grandfather was rounded up on the ‘Night of Broken Glass’ and taken to Buchenwald concentration camp in the Second World War.

Artur Mamelok, Cathy’s grandfather, was taken to the ‘horrific’ Nazi prison with 963 people from Breslau and was there for 16 days.

He had been captured on the notorious Kristallnacht – or the ‘Night of Broken Glass’ – where 30,000 Jews were arrested on November 9, 1938.

Brokenshire’s daughter Sophie, 16, looked into records from Breslau Synagogue and confirmed Artur had been at the death camp with his father-in-law Willi Caspari. 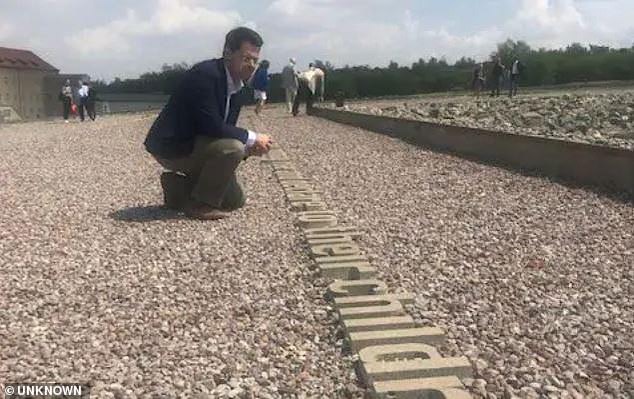 Artur Mamelok, Cathy’s grandfather, was taken to the ‘horrific’ Nazi prison with 963 people from Breslau and was there for 16 days (Brokenshire pictured at the camp) 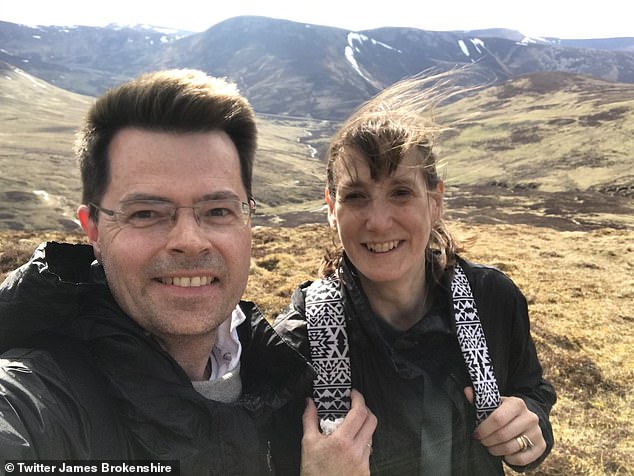 Brokenshire and Cathy’s (both pictured) daughter Sophie, 16, looked into records from Breslau Synagogue and confirmed Artur had been at the death camp with his father-in-law Willi Caspari

MP for Old Bexley and Sidcup Brokenshire, who has been to visit it with his father-in-law Michael, told the Sunday Telegraph: ‘Artur was one of the lucky ones.

‘He was able to get to England and have a life, which means I have my wife and kids.

‘That could so easily not have been, given the numbers killed at Buchenwald and the horror and depravity there.’ 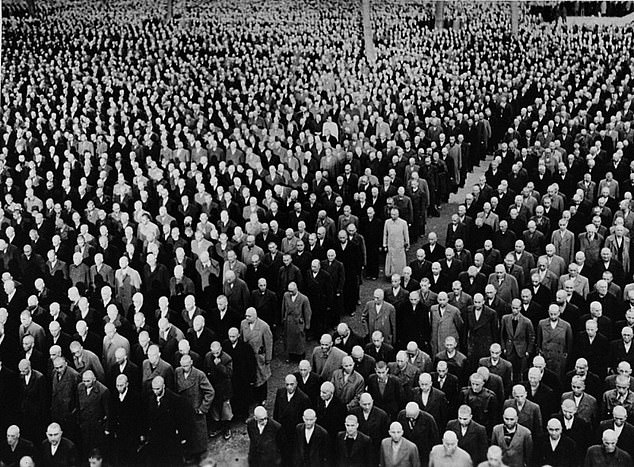 MP for Old Bexley and Sidcup Brokenshire, who has been to visit the camp (pictured during the Second World War) with his father-in-law Michael, said: ‘Artur was one of the lucky ones. He was able to get to England and have a life, which means I have my wife and kids’

Artur never mention his time in the death camp to son Michael, 83, before he died in 1960.

But Michael’s mother Cilla left a note just before she died in the 1990s which revealed Artur and Willi had been taken on Kristallnacht and taken to Buchenwald.

It also said five aunts and four uncles had gone to other camps and passed away there. 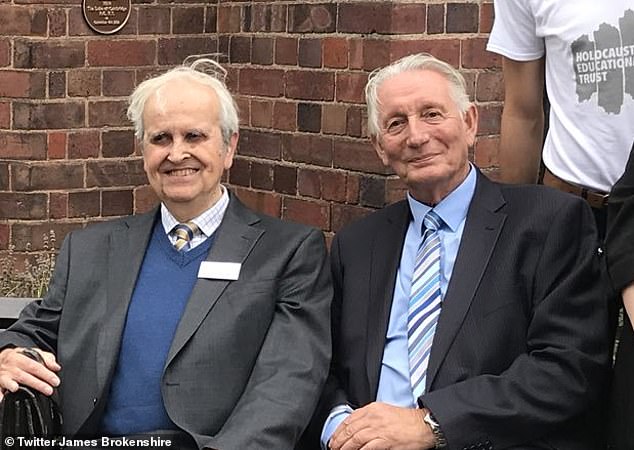 Artur never mention his time in the death camp to son Michael, 83, (right) before he died in 1960

Michael, as he stood on the daily roll call spot where his father would have done 70 years earlier, said: ‘Standing there as a free man in the sunshine, it’s impossible to imagine what took place.

‘Holding on to the gate gave me a sense of connection to my father. I looked at it and held on to it and thought: ”He’d been through here”.’

Michael and Brokenshire both kneeled at a memorial to those who died and placed a stone on it in Jewish tradition during their visit last month.

The two looked at a haunting picture from 1938 which showed lines of Jewish men in the camp where 56,000 would die. 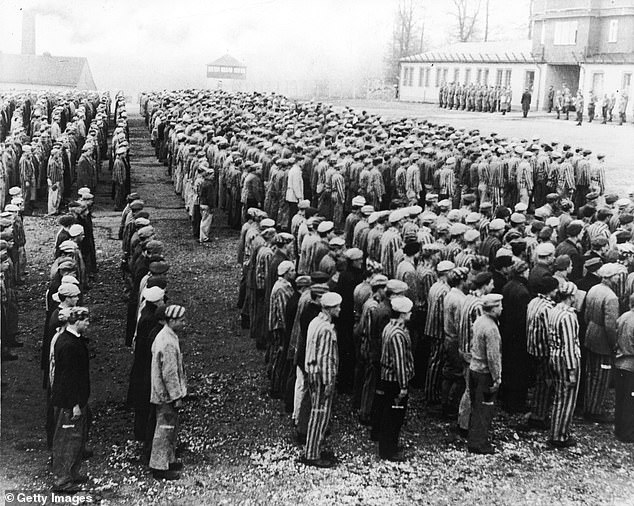 The two looked at a haunting picture (shown) from 1938 which showed lines of Jewish men in the camp where 56,000 would die

Michael recalled how his mother Cilla would mention MI6 agent Frank Foley, who, acting as a passport control officer at the British Embassy in Berlin, saved 10,000 Jews, some being her family.

Brokenshire said: ‘[Cilla] said she had to go to the loo but instead went straight to Foley’s office. He told her Artur would be freed, but would have to leave the country within 24 hours.’

The politician said while he was on ministerial leave in Berlin in 2011, Michael mentioned a plaque to Foley in the capital, which he visited and started their interest in Artur’s life. 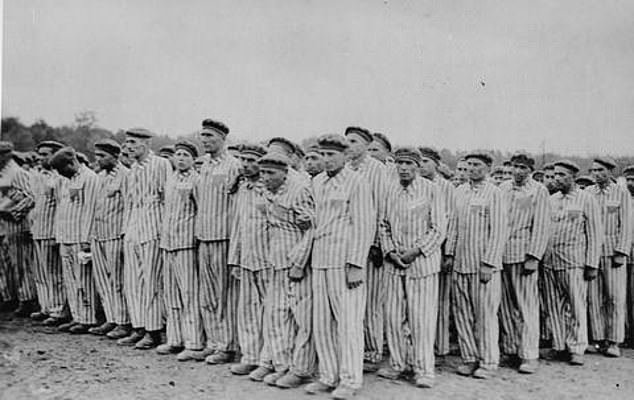 Michael and Brokenshire both kneeled at a memorial to those who died and placed a stone on it in Jewish tradition during their visit last month. Pictured: From inside the camp during the war

KRISTALLNACHT: THE NIGHT OF BROKEN GLASS

On November 9. 1938, the Nazis began their campaign to destroy the Jewish race.

The authorities watched on as Hitler’s SA paramilitary force and non-Jewish civilians targeted Jewish businesses and homes. 91 Jews were killed in the attacks in Germany and Austria and more than 30,000 were arrested and incarcerated in concentration camps.

Jewish homes, hospitals and schools were ransacked and more than 1,000 synagogues were burned down, while thousands of Jewish businesses were destroyed.

Historians have long pointed to the two-day campaign of terror as the start of Hitler’s Final Solution – the dictator’s comprehensive plan to exterminate the entire Jewish population in Nazi occupied Europe.

The name of the wave of violence refers to the shards of glass left strewn across cities in the aftermath of the bloody pogroms.

Buchenwald, which was open from 1937 to 1945, was the largest death camp by the end of the war – and it became synonymous with the Nazi policy of extermination.

Work began on building the camp in 1937 and it was liberated by allied forces on April 11th 1945 when Units of the 3rd US Army reached Ettersberg Hill near Weimar.

But while it was running, inmates would face hard labour for up to 14 hours a day, as well as savage beatings from SS guards.

There was also the threat of typhus, which killed hundreds after stemming from a lack of water and medical experiments.

The camp was run by the Soviets after the war until 1950, when it was closed and the barracks were burnt to the ground.

Brokenshire said the camp reminded him of what should be learned from the Holocaust, adding that it has become ever more relevant due to rising anti-Semitism in recent months.

He said: ‘Too many British Jews are very uncomfortable and some would express fear that doesn’t reflect the country I believe we are.’

He added on Twitter: ‘Essential that we continue to confront antisemitism and hatred wherever it occurs and apply the lessons from the Holocaust.

‘So many families are touched in some way by the horror of where this can lead – including my own.’

Brokenshire has been a part of work on the £100million Holocaust memorial for outside Parliament. 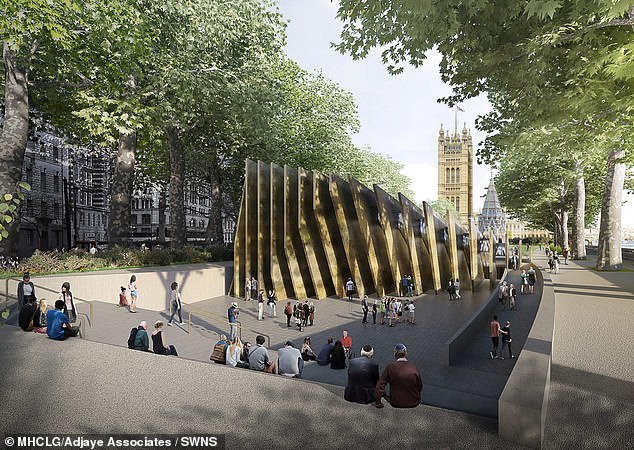 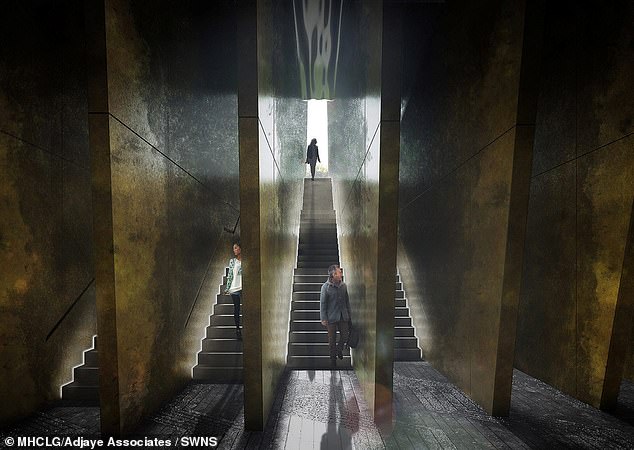 Experts said that while the idea was sound in principle, it would be harmful to the park and interrupt views 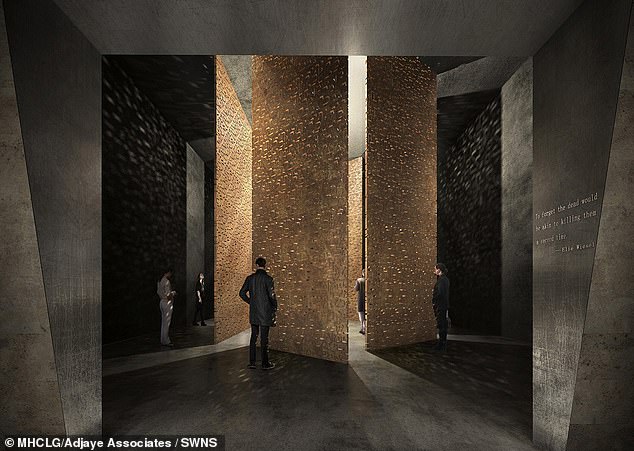 Architects working on the project, led by Sir David Adjaye, said they were aiming to ensure 90% of the original park is retained

More than 170 MPs and peers gave their backing to proposals – which have been discussed since 2016 – for the new national memorial and learning centre in Victoria Tower Gardens on Millbank, alongside the River Thames.

It will be dedicated to the six million Jewish men, women and children and other victims murdered by the Nazis.

Parliamentarians said there is ‘no better location’ for the memorial, but the project has been criticised for its potentially harmful impact on the small central London park.

A planning application is being considered by Westminster City Council, with a decision expected this summer.

The memorial’s design features 23 large bronze fin structures that visitors can walk among, leading to the underground learning centre.

It was one of the largest concentration camps in Nazi Germany, where tens of thousands died and prisoners were subjected to astonishingly cruel medical experiments.

More than 250,000 men, women and children from across Europe were held at Buchenwald, near the German city of Weimar, from its opening in 1937 until its closure eight years later.

Some 56,000 people, including Jews, homosexuals, Roma and Soviet prisoners, are believed to have died within its walls. Inmates also included the mentally ill, people left physically disabled from birth defects and religious and political prisoners.

Surrounded by an electrified barbed-wire fence, watchtowers and sentries, captives lived in terrible conditions with many starving to death or succumbing to disease.

Written in the camp’s main entrance gate was the motto ‘Jedem das Seine’, meaning ‘to each his own’ – a phrase that has become controversial in modern day Germany.

Most of the early inmates were political prisoners, but following the Kristallnacht attacks in 1938 almost 10,000 Jews were sent to Buchenwald and subjected to unimaginably cruel treatment.

Medical experiments were carried out on inmates from 1941 – some of which involved testing the effectiveness of vaccines and attempting to ‘cure’ homosexuality through hormonal transplants.

About 112,000 prisoners were there by February 1945 as the war was coming to an end and it became an important source of forced labour for the Nazis, who opened a rail siding there to enable the movement of war supplies.

The SS shot prisoners in the stables and hanged others in the crematorium.

Some 21,000 prisoners were freed by US forces in April 1945 – but 28,000 were evacuated by the Germans in the days prior to the liberation, a third of whom died from exhaustion or being shot.

Shocking scenes were witnessed by US troops who found starving survivors and piles of emaciated corpses.

Dwight D. Eisenhower, at the time the supreme commander of the Allied Forces, visited the camp after its liberation and later wrote of the horrors he witnessed: ‘Nothing has ever shocked me as much as that sight.’

Between 1945 and 1950, the site was used by the Soviet Union as a special camp for Nazi prisoners.

Today, its remains serve as a memorial to those who died.