Tokyo The International Olympic Committee president has agreed "100 per cent" to a proposal of postponing the Tokyo Olympics for about one year until 2021 because of the coronavirus outbreak, Japanese Prime Minister Shinzo Abe has said. 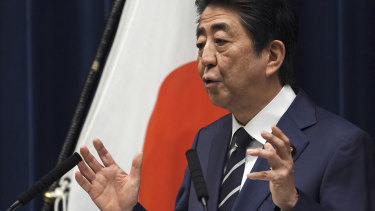 Japanese Prime Minister Shinzo Abe says he has asked for a postponement to the Tokyo Games.Credit: AP

Abe said after his telephone talks with Thomas Bach that he requested a postponement of about one year "taking into consideration the current circumstances" and to secure an environment in which athletes can perform in their best conditions and the sense of safety and security for the audience.

Abe held telephone talks with Bach on Tuesday after the IOC said it would make a decision on the Tokyo Games over the next four weeks.

Organisers came under global pressure to postpone the event for the first time in the Olympics' 124-year modern history after Canada then Australia withdrew from competition on Sunday.

Britain then said it was ready to follow the two Commonwealth countries and also refuse to take part in the Games.

The Games were scheduled to be held from July 24 to August 9.

Get our Coronavirus Update newsletter for the day’s crucial developments at a glance, the numbers you need to know and what our readers are saying. Sign up to The Sydney Morning Herald‘s newsletter here and The Age‘s here.

A postponement would be a massive blow for the host country, Japan, which has pumped in more than $US12 billion ($A20 billion) of investment, and huge sums are also at stake for sponsors and broadcasters.

But a groundswell of concern from athletes – already struggling to train as gyms, stadiums and swimming pools close around the world – appears to be tipping the balance, along with the cancellation of other major sports events.

More than 330,000 people have been infected by the novel coronavirus worldwide and more than 14,600 have died in a pandemic that the World Health Organisation said was accelerating.

The Olympics have never before been delayed, though they were cancelled altogether in 1916, 1940 and 1944 during the two world wars, and major Cold War boycotts disrupted the Moscow and Los Angeles Games in 1980 and 1984 respectively.