Amazon tycoon Jeff Bezos said going to space made him realise ‘how thin the globe’s atmosphere is’ during a lecture to world leaders at COP26.

After landing in Glasgow on his £48million private jet, Mr Bezos stressed the importance of environmentalism to Boris Johnson, Joe Biden and other government heads who have gathered this week to discuss international cooperation on green issues.

Mr Bezos’ Gulf Stream has led a 400-strong parade of private jets into COP26, including scores of royals and dozens of ‘green’ CEOs – amid an extraordinary traffic jam which forced empty planes to fly 30 miles to find space to park.

Speaking today, billionaire Mr Bezos, who earlier this year made a short journey to space in the first crewed flight of his rocket ship, New Shepard, pledged $2billion (£1.47 billion) for land restoration in Africa, paid as part of the Bezos Earth Fund.

He told delegates: ‘I was told that seeing the Earth from space changes the lens through which you see the world. But I was not prepared for how much that would be true.

‘Looking back at earth from up there, the atmosphere seems so thin. The world so finite and so fragile. Now in this critical year, and what we all know is a decisive decade, we must all stand together to protect our world.’

Mr Bezos previously indicated the investment would be $1billion (£732million) at an event with the Prince of Wales on Monday. 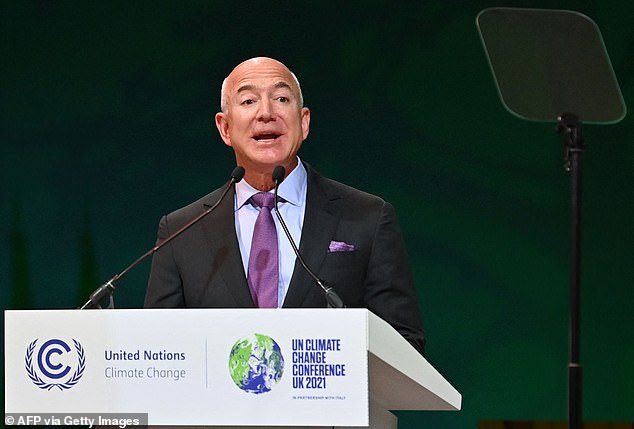 Speaking today, billionaire Mr Bezos, who earlier this year made a short journey to space in the first crewed flight of his rocket ship, New Shepard, said he had gained new perspective

‘We must conserve what we still have, we must restore what we’ve lost and we must grow what we need to live without degrading the planet for future generations to come,’ he said.

‘Two thirds of the land in Africa is degraded, but this can be reversed.

‘As we destroy nature, we reverse this process. Cut down a forest, destroy the mangroves, pave over the prairies, and instead of sequestering carbon, we emit it.

‘In too many parts of the world nature is already flipping from a carbon sink to a carbon source. This is a profound and urgent danger to us all.’

He said that he was ‘honoured’ to pledge $2billion to restore nature as part of the Bezos Earth Fund’s ‘$10billion commitment to fight climate change, enhance nature, advance environmental justice and economic opportunity’.

On Sunday, MailOnline observed at least 52 private jets landing at Glasgow – while estimates put the total number flying in for the conference at 400.

Conservative predictions suggest the fleet of private jets arriving for COP26 will blast out 13,000tonnes of carbon dioxide in total – equivalent to the amount consumed by more than 1,600 Britons in a year.

Mr Bezos – who regularly lectures the world on climate change – arrived in Glasgow fresh from celebrating Microsoft founder Bill Gates’ 66th birthday on a £2million-a-week superyacht off the coast of Turkey in an event that generated fresh claims of green hypocrisy.

He reached the boat by helicopter, according to reports.