JERUSALEM woke up to the rare sight of the Dome of the Rock and the Western Wall covered in snow this week.

Snow from the "wobbling" polar vortex has blanketed parts of Syria, Lebanon, Jordan, Libya and Israel, reaching areas of the Middle East which have not seen snow in years. 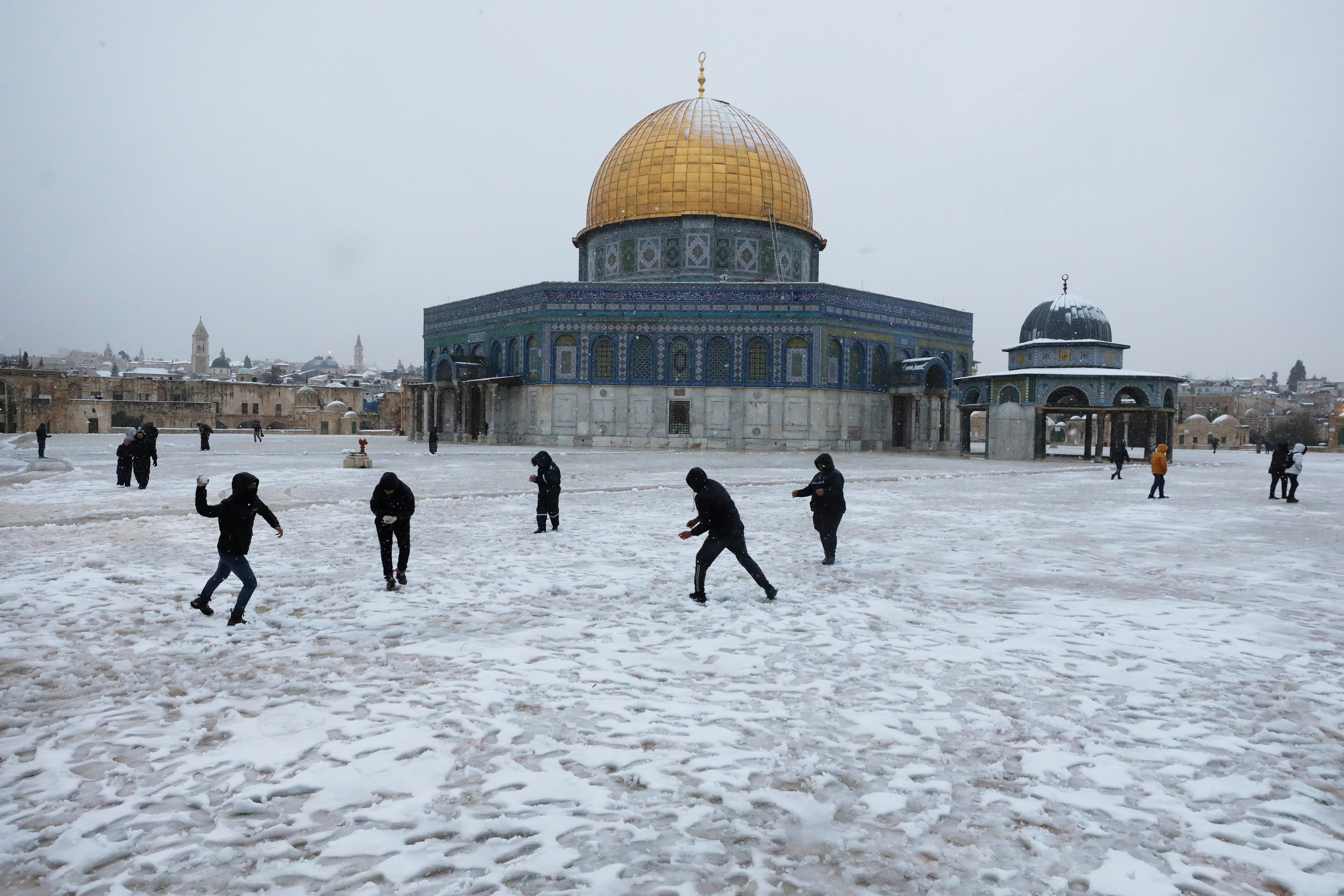 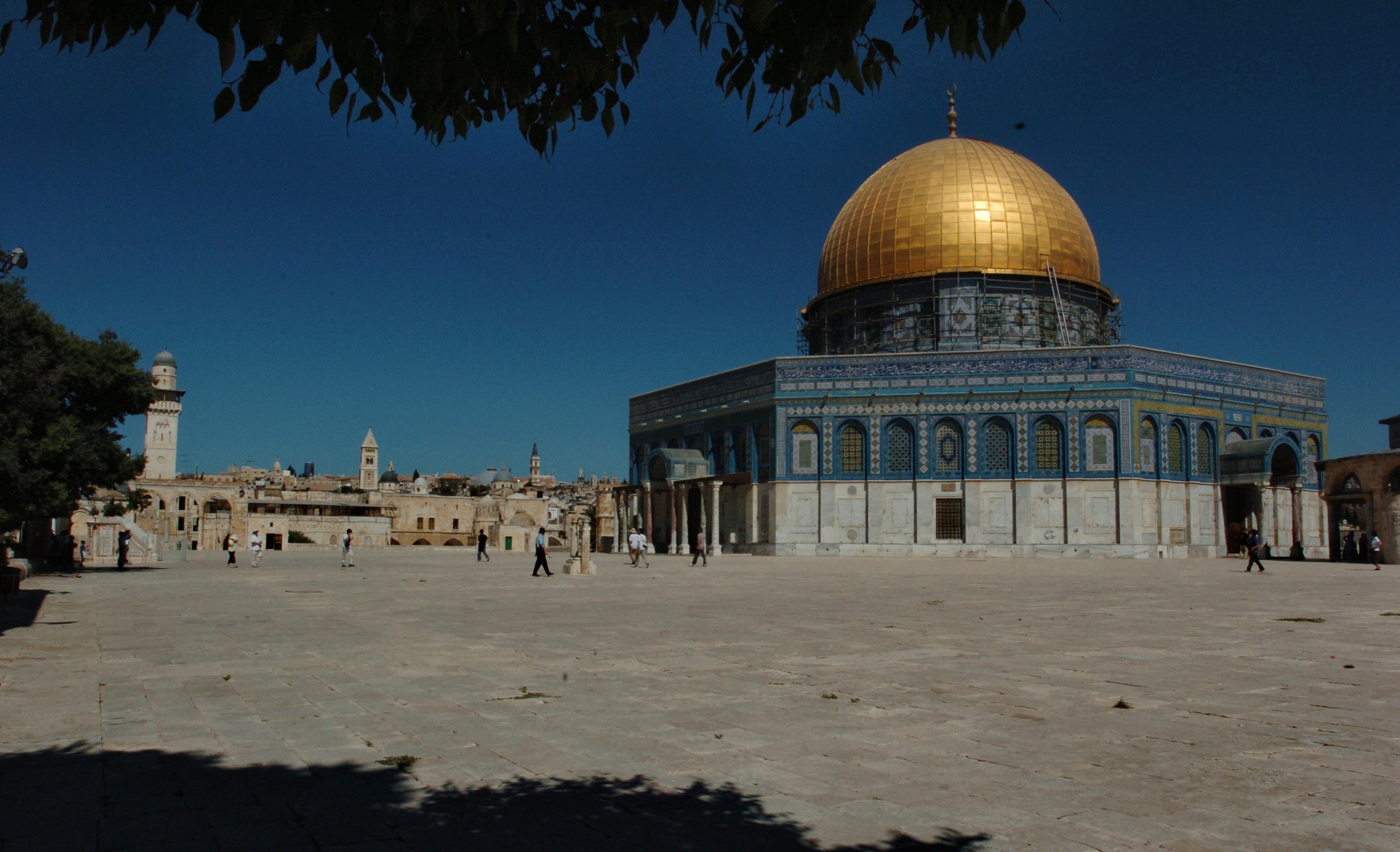 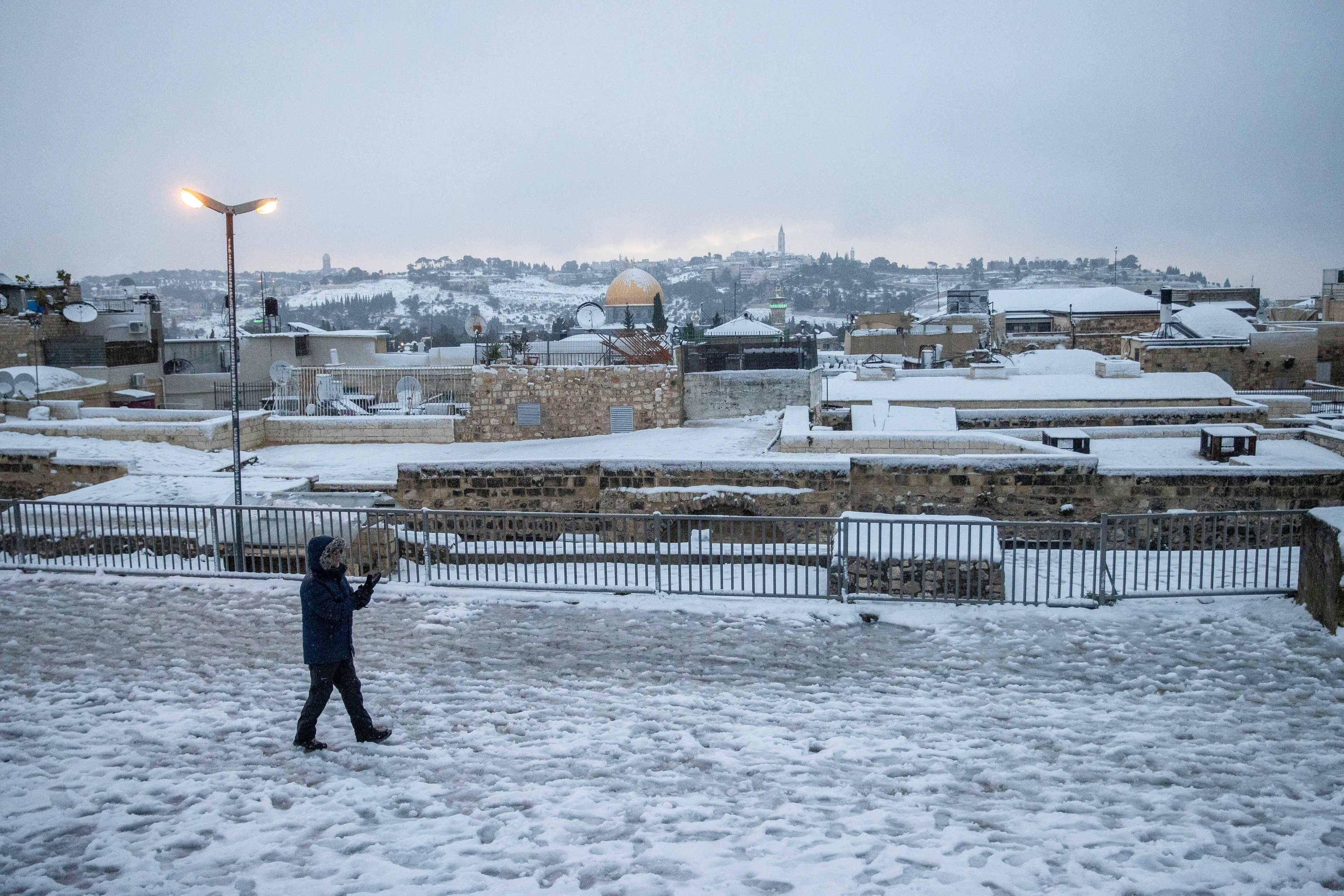 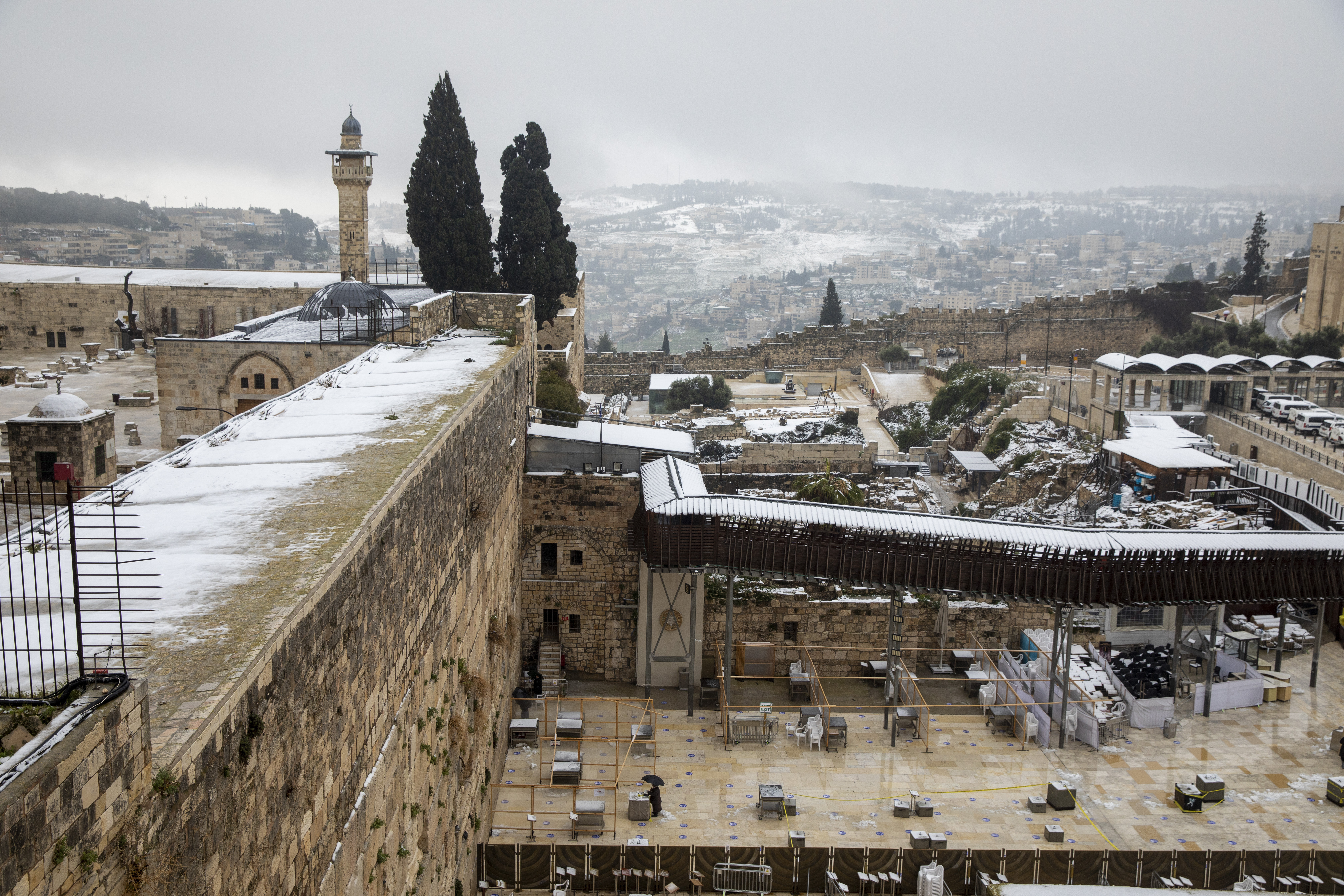 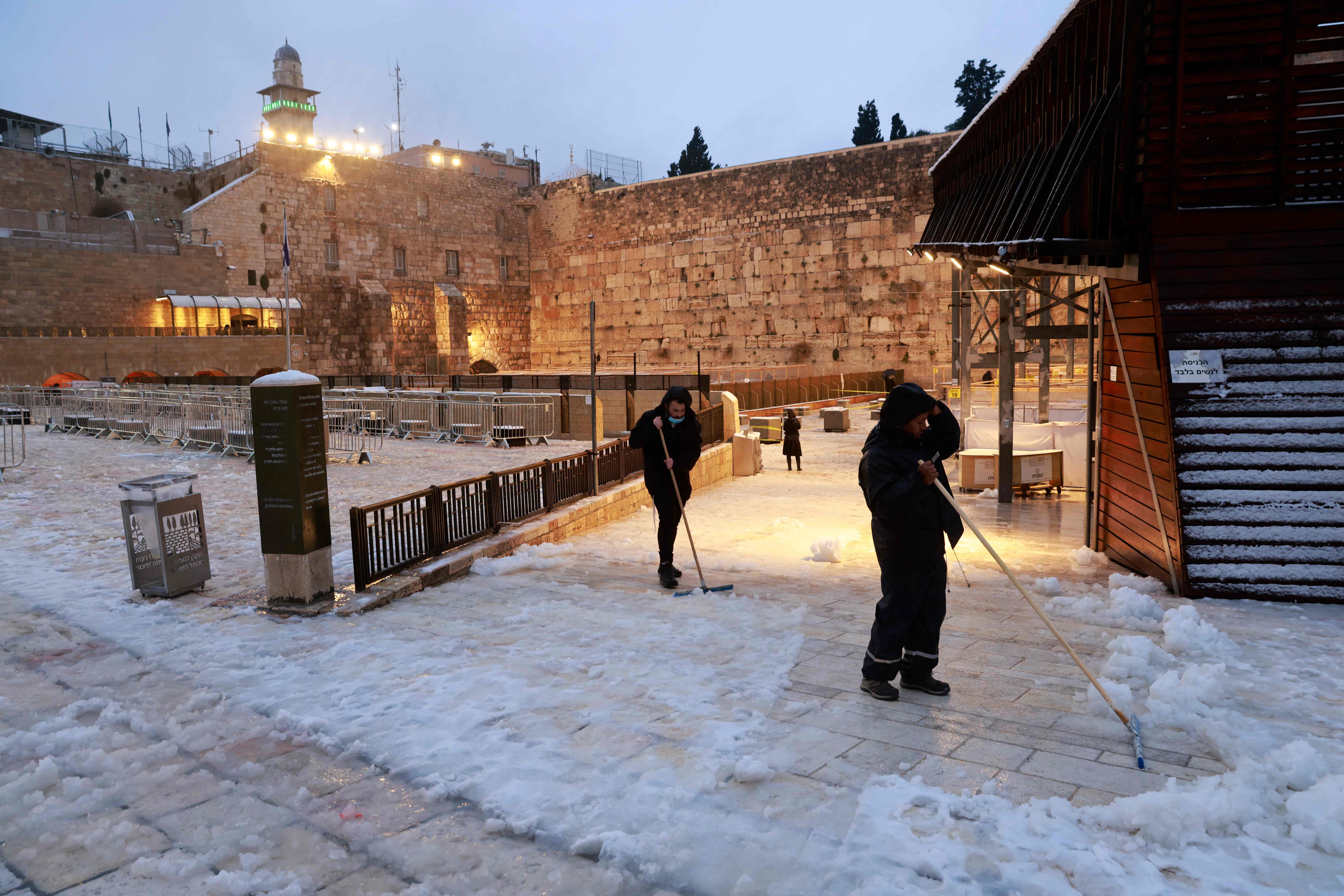 Children hurled snowballs at each other outside the Old City gates, while others trudged through the thick snow to the holy sites.

"We came in from Tel Aviv to play in the snow," said Ben Miller told Reuters.

Israeli cops shut the main road between Tel Aviv and Jerusalem due to the blizzard conditions, which started on Wednesday night.

The wild weather in the region is down to the shifting polar vortex.

The heavy snow has sparked traffic chaos, postponed the coronavirus vaccination rollout and exams at some universities have even been cancelled.

Lebanon was hit hard by Storm Joyce, which brought fierce winds of up to 62mph, widespread snowfall and storm surges.

It snowed for the first time in years in Marjayoun in the south of the country. 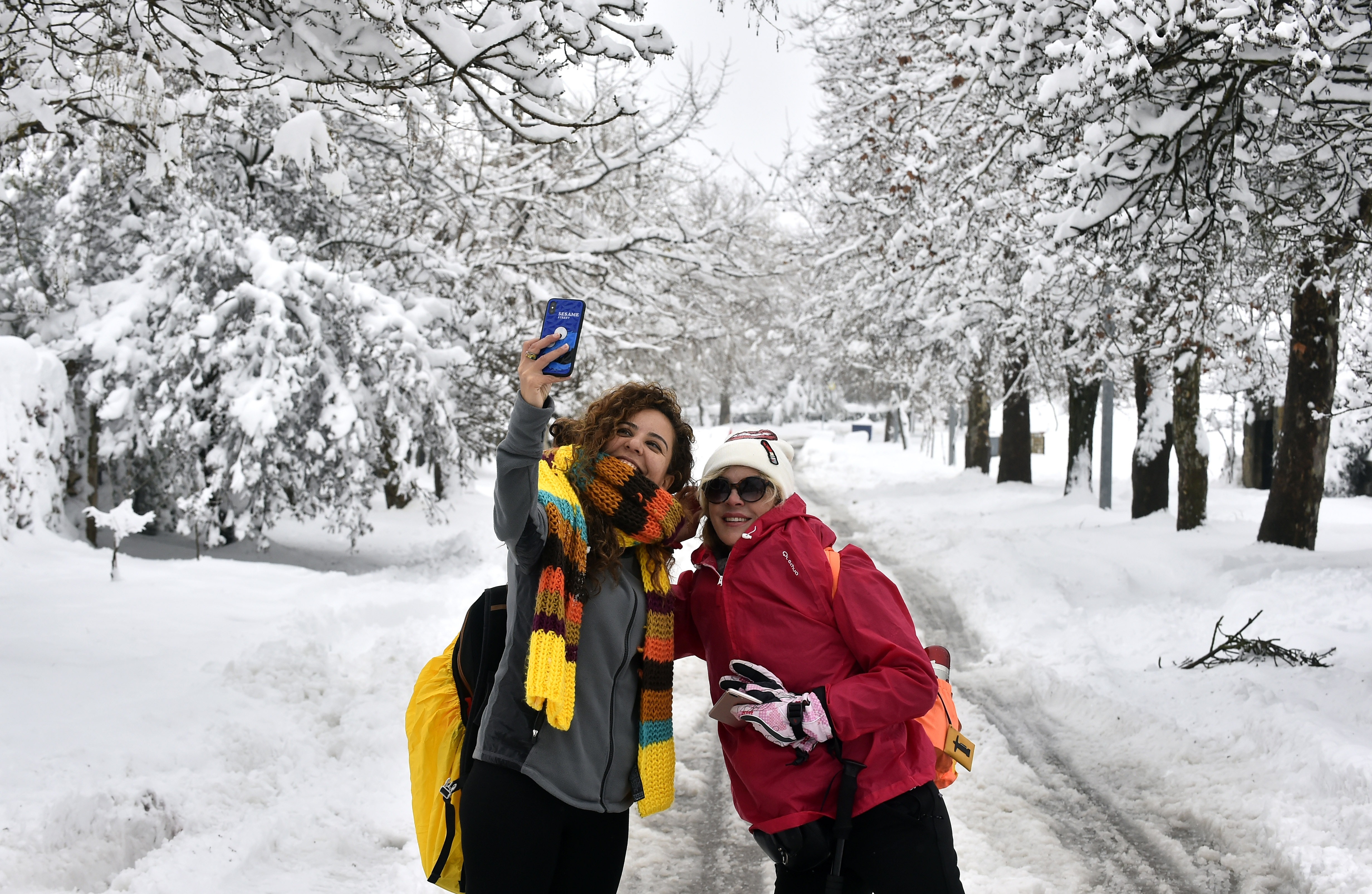 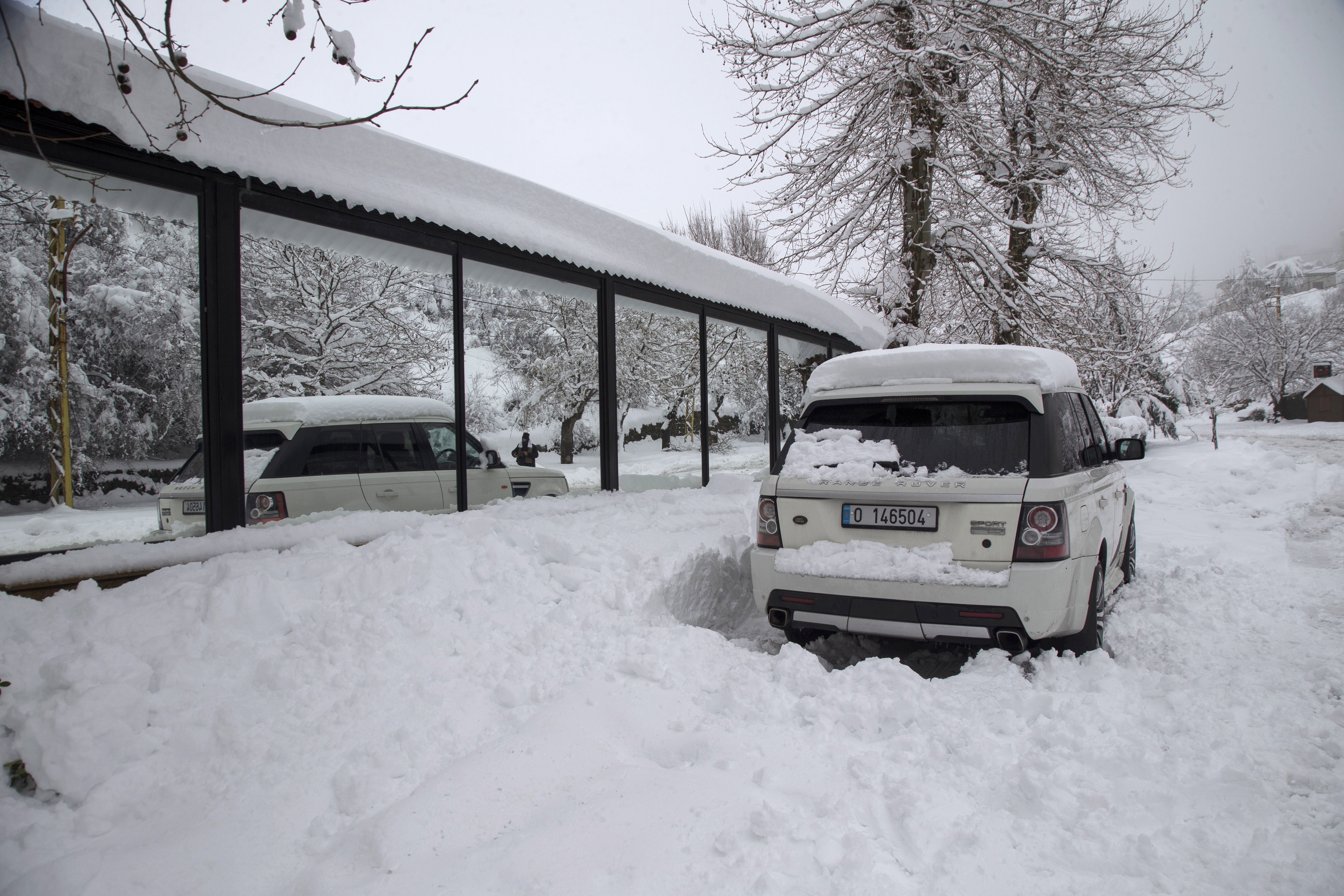 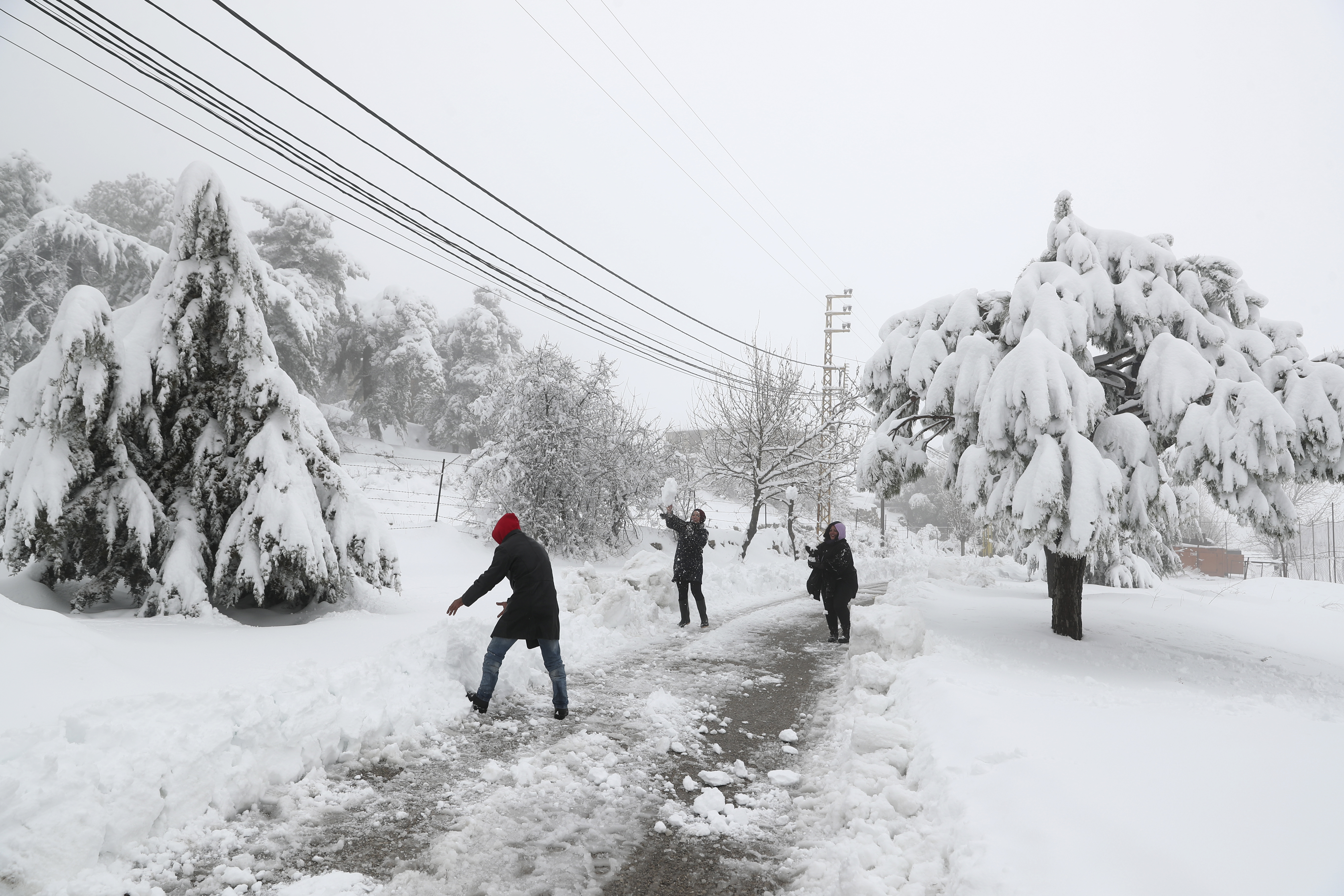 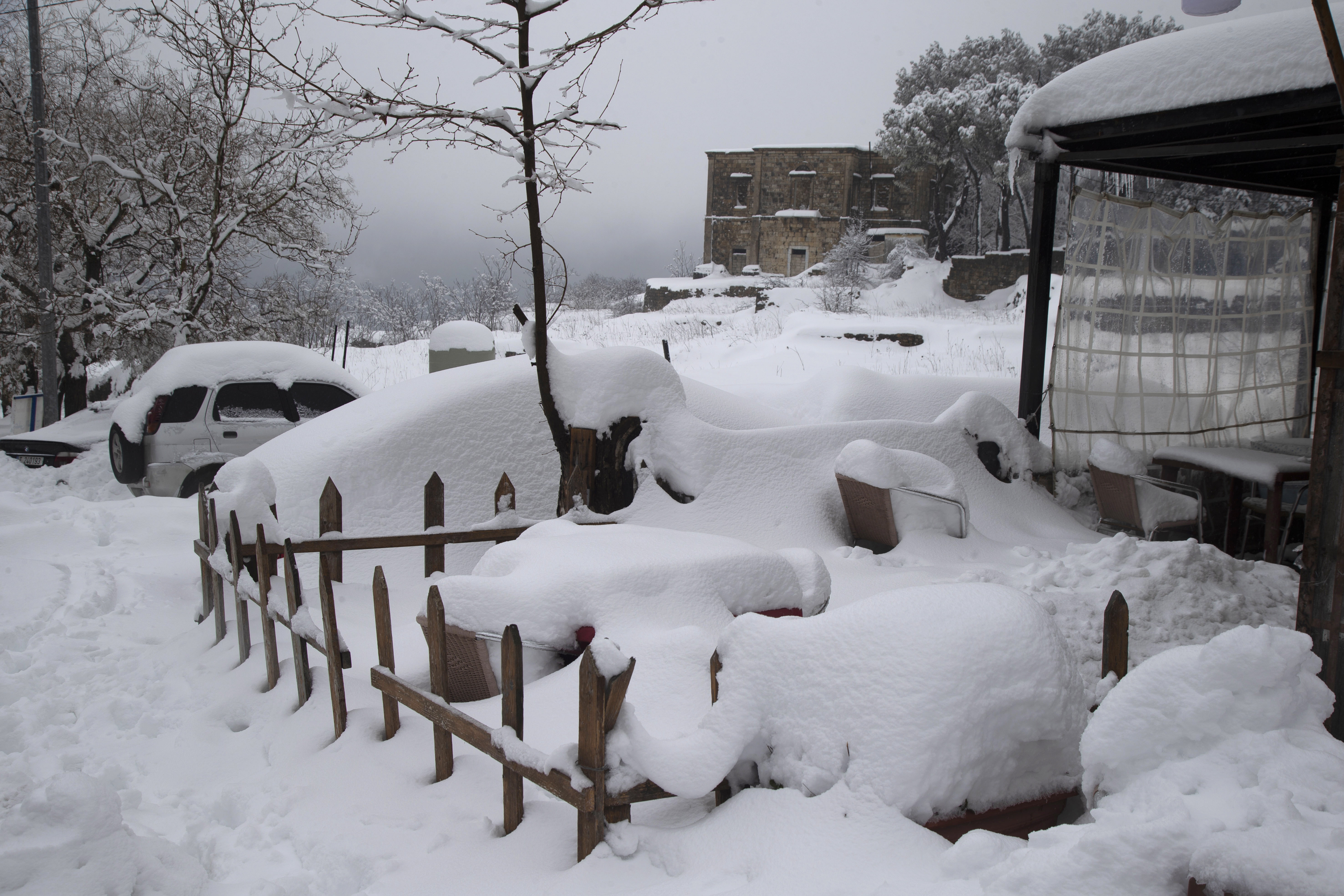 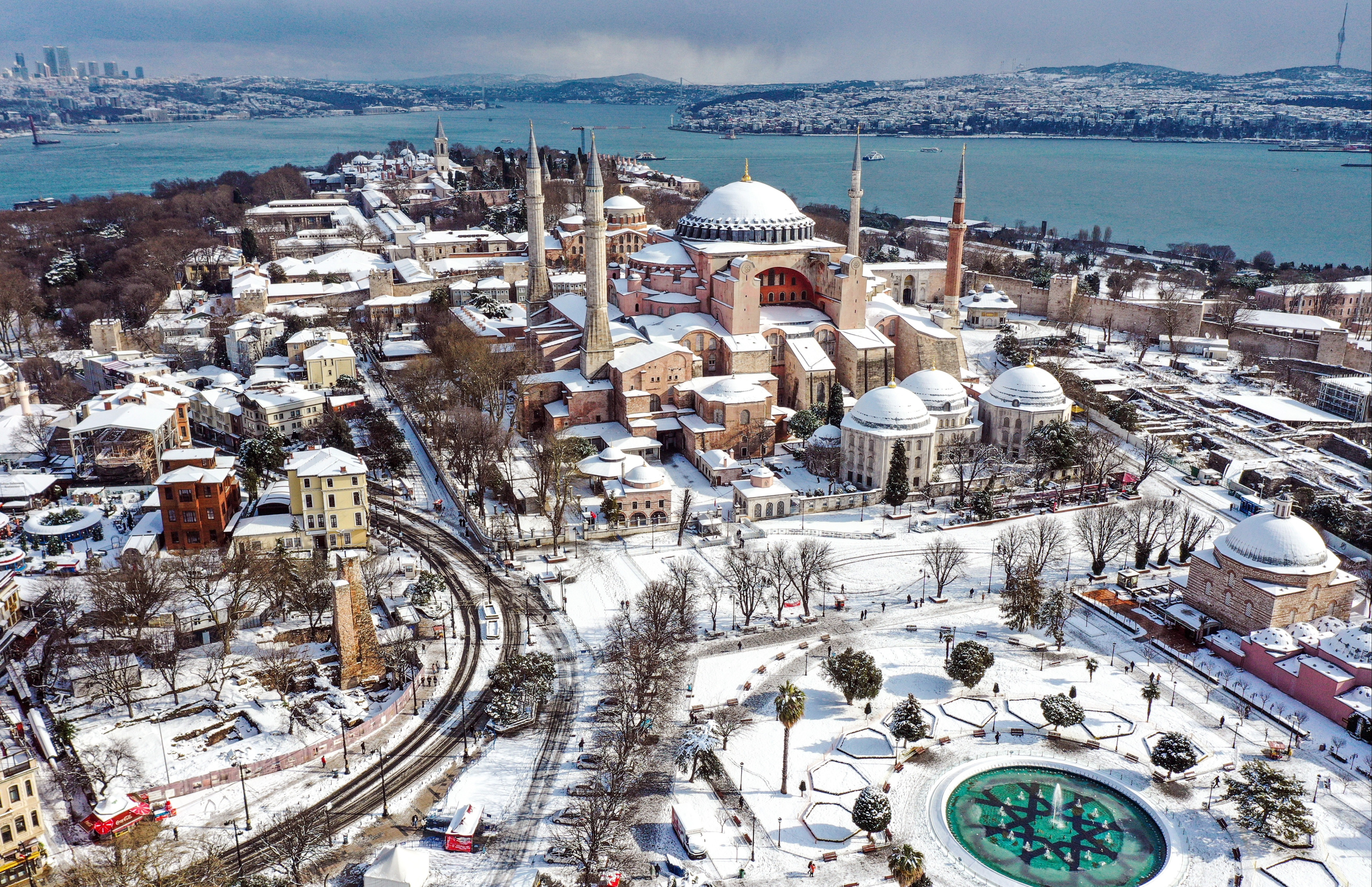 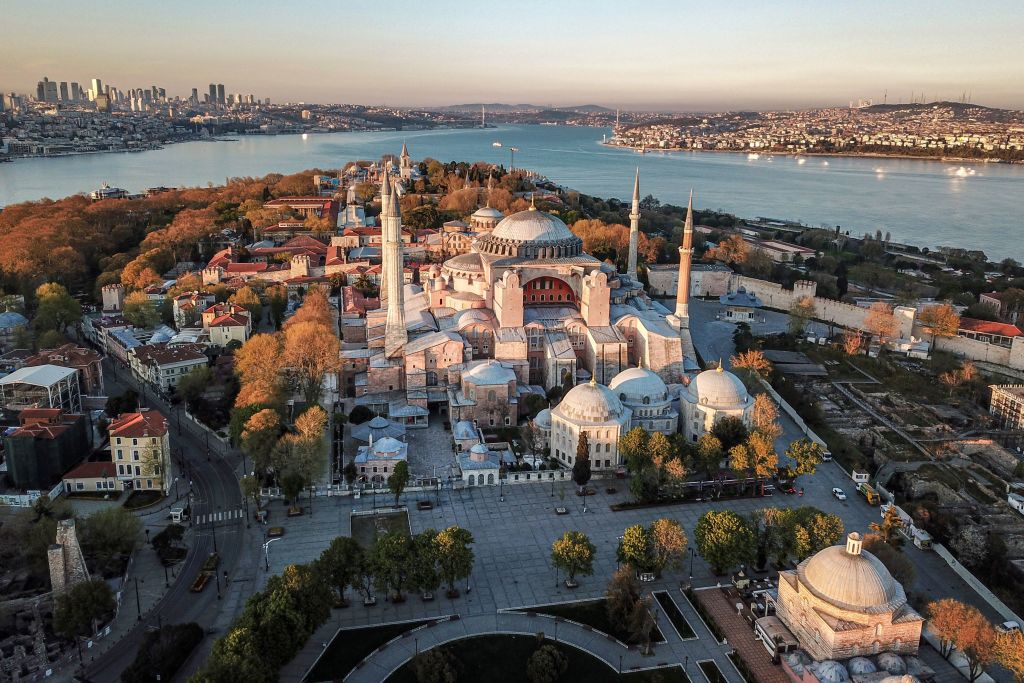 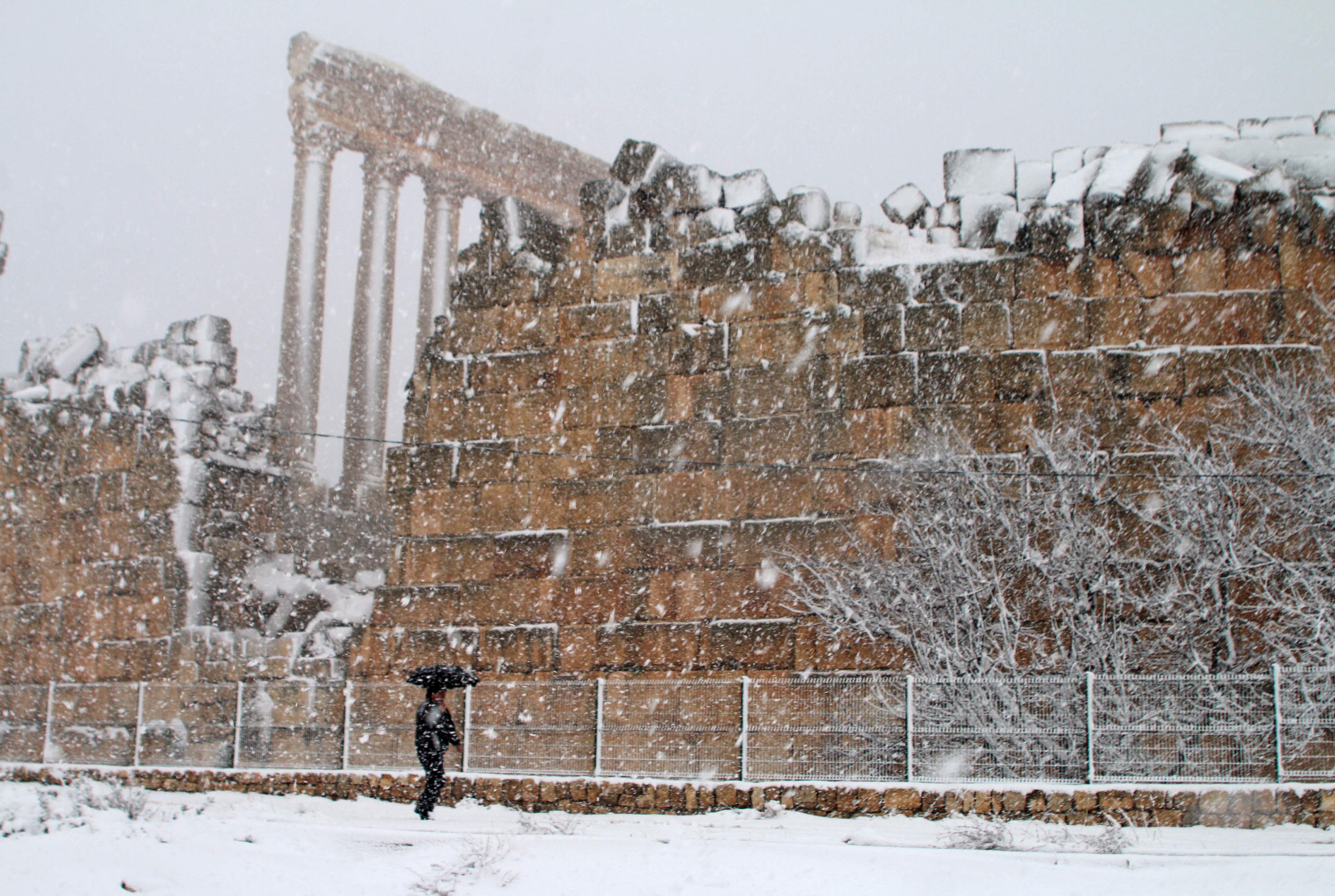 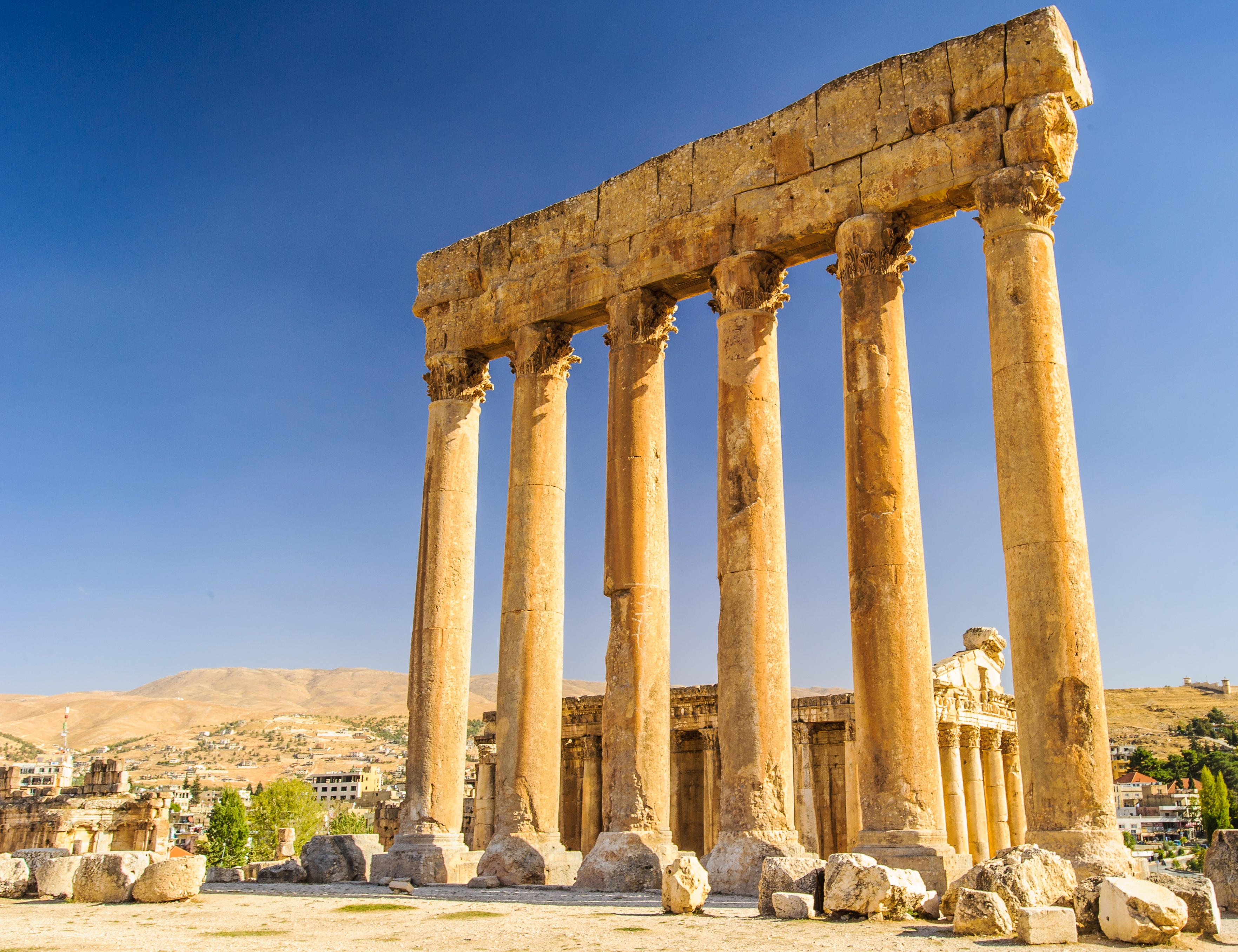 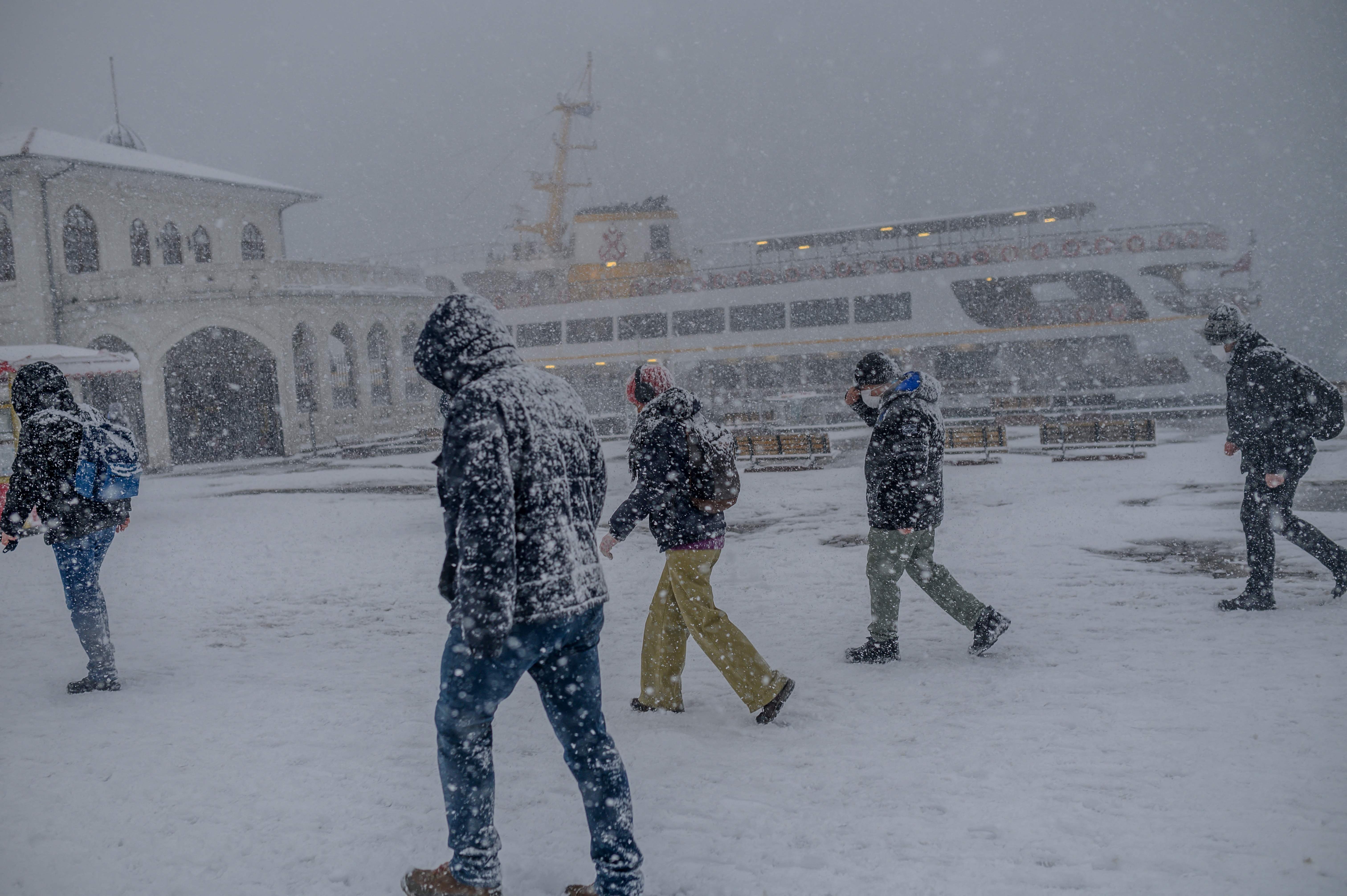 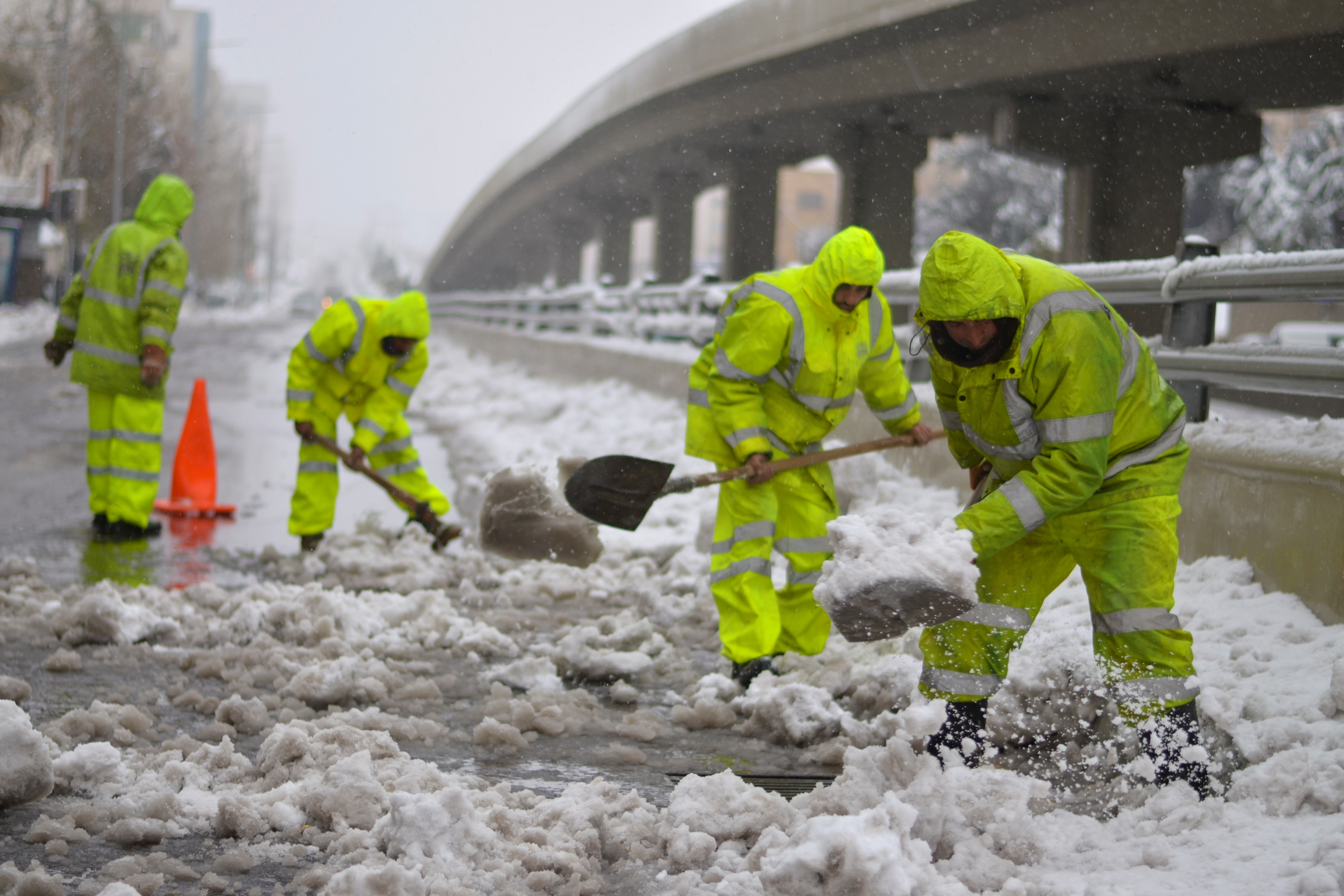 Gale force winds knocked out electricity in vast parts of the country, forcing many Lebanese, already used to power cuts, to rely on generators for longer hours.

In the mountains of Syria's Sweida province, six inches of snow fell,according to the state news agency SANA.

Roads in some provinces were blocked, and in the central province of Hama, bulldozers shoveled snow to open roads while vehicles skidded on ice.

Flakes also fell in the capital of Damascus, where mid-term exams at the city's university were called off due to the extreme weather conditions.

Local authorities in the provinces of Sweida, Quneitra, Daraa and Tartous also shut schools on Thursday due to the heavy snowfall.

But the snow in Damascus did not stop the Premier League soccer tournament from going ahead, as Army Sports Club and Al-Karamah faced off despite the snow-covered pitch, the Syrian Al-Watan daily reported.

Snow even reached Bayda in northeastern Libya for the first time in 15 years.

Flakes blanketed the country's northeast mountains, covering forests and roads in some areas in the North African country. 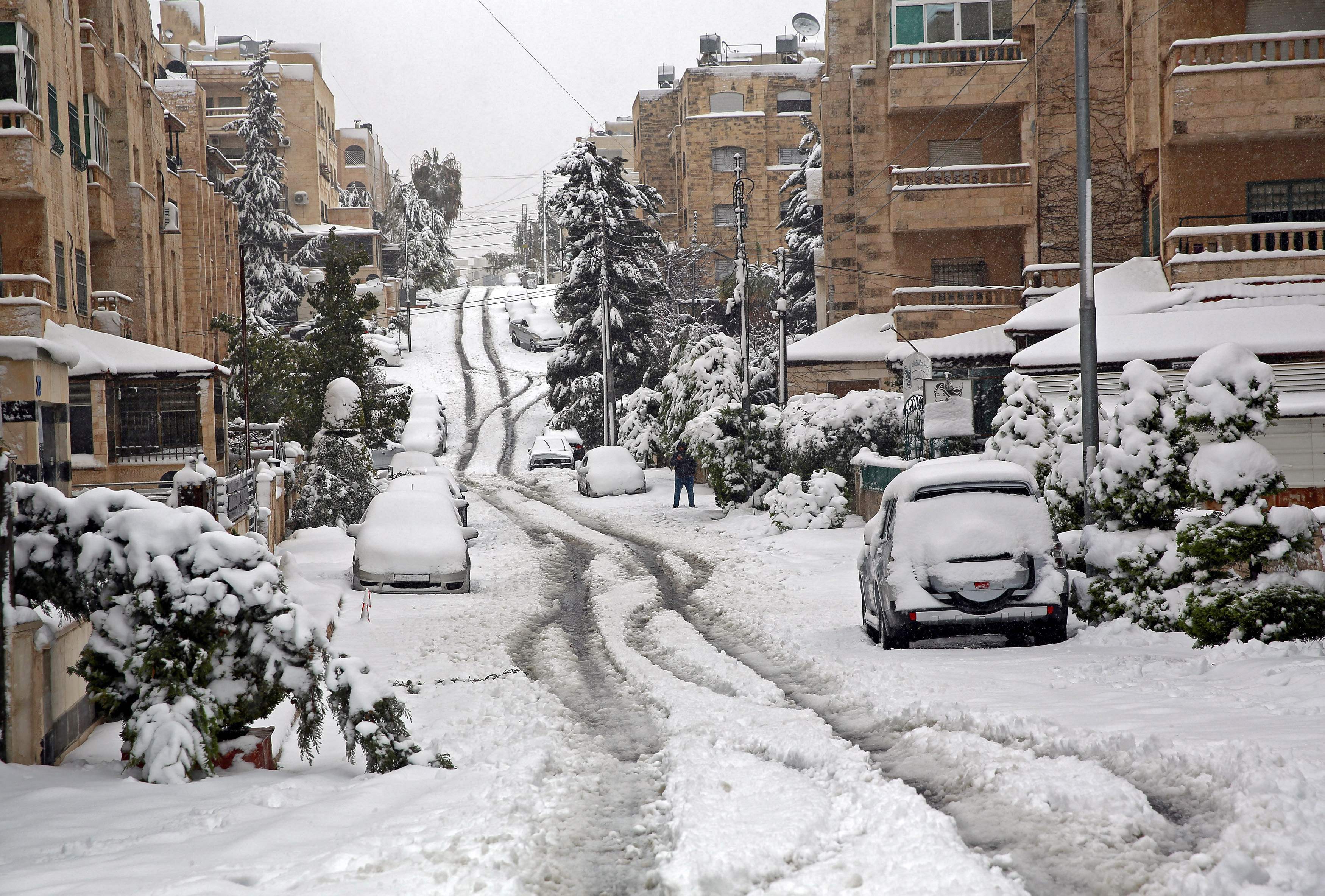 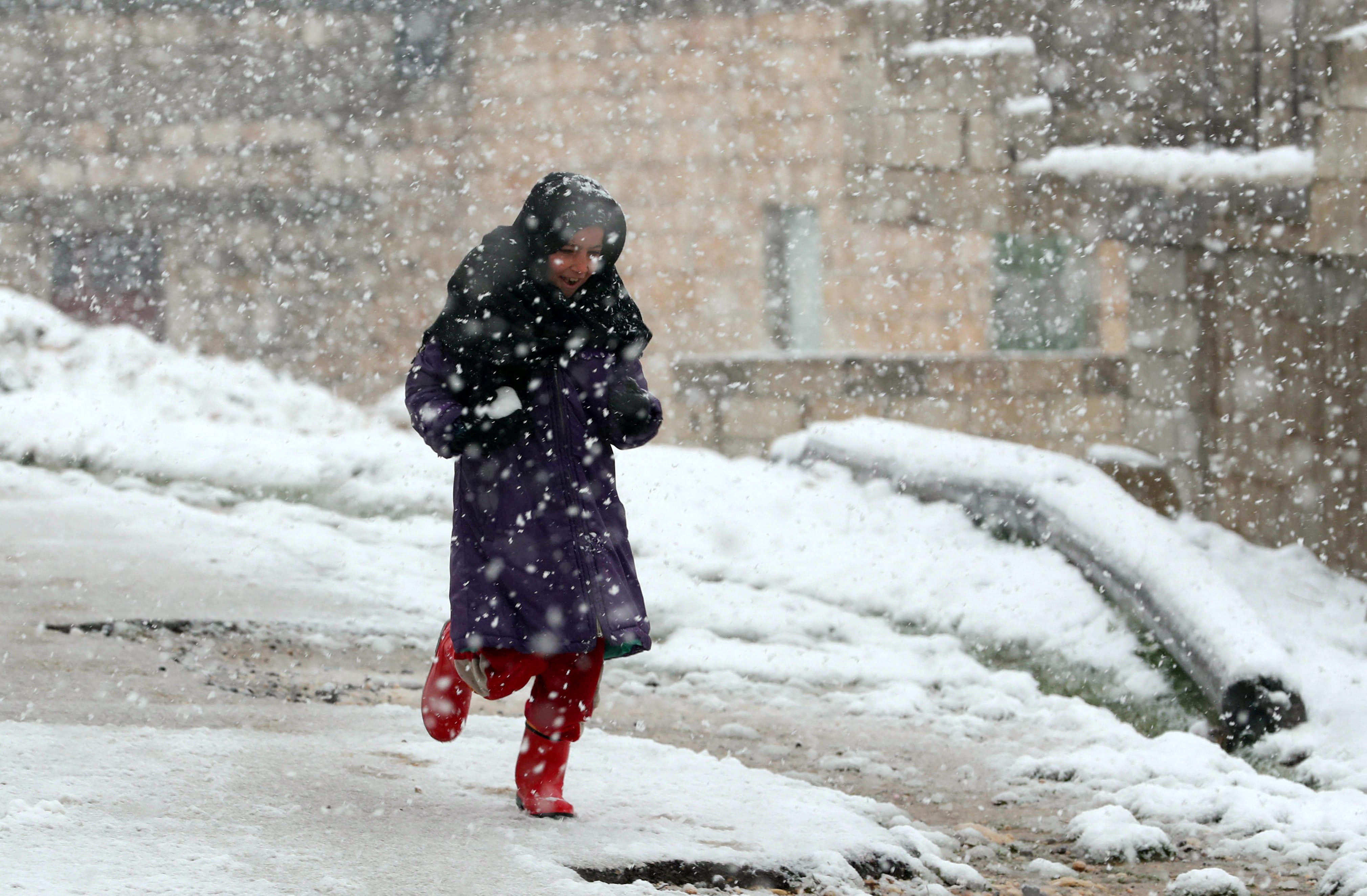 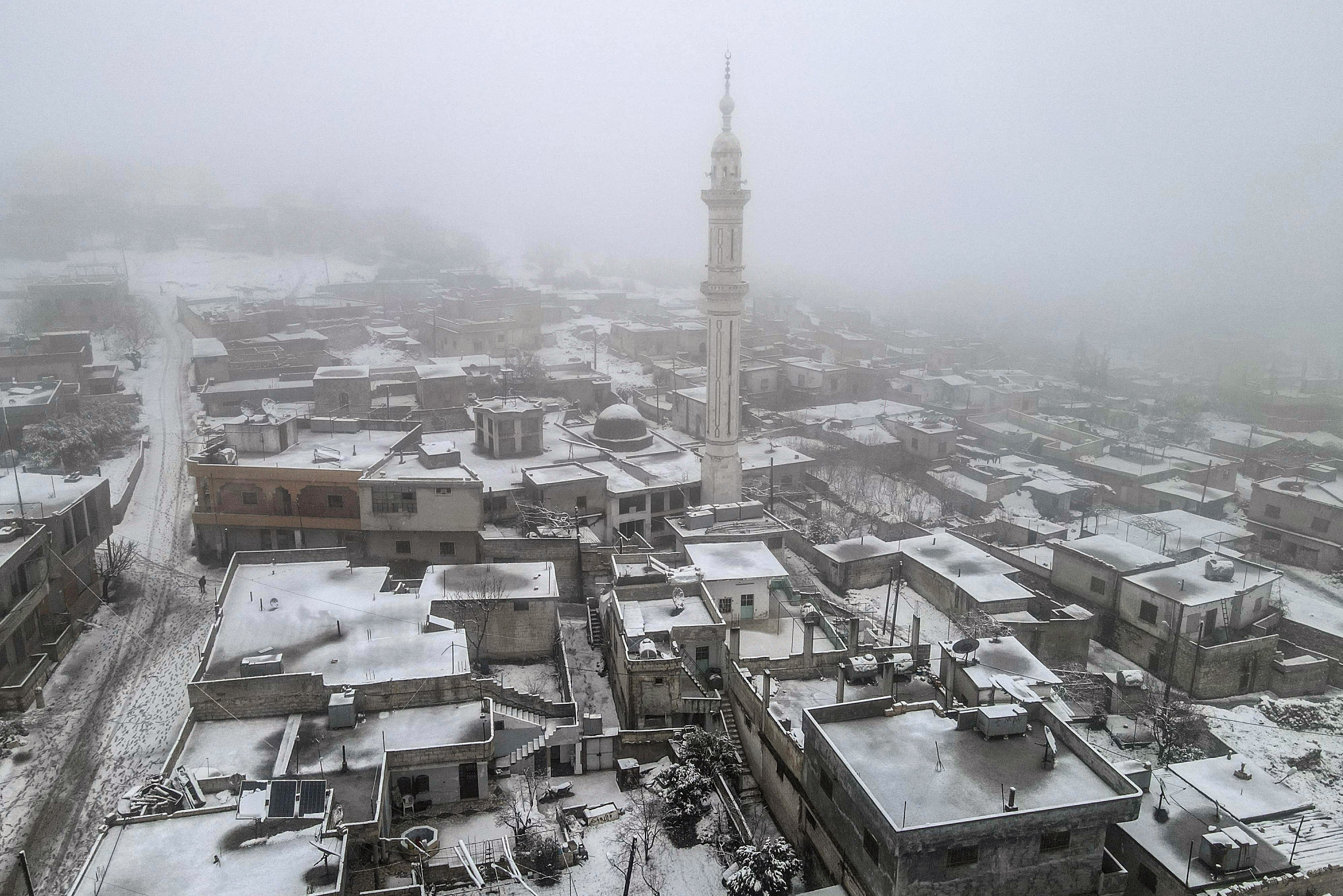 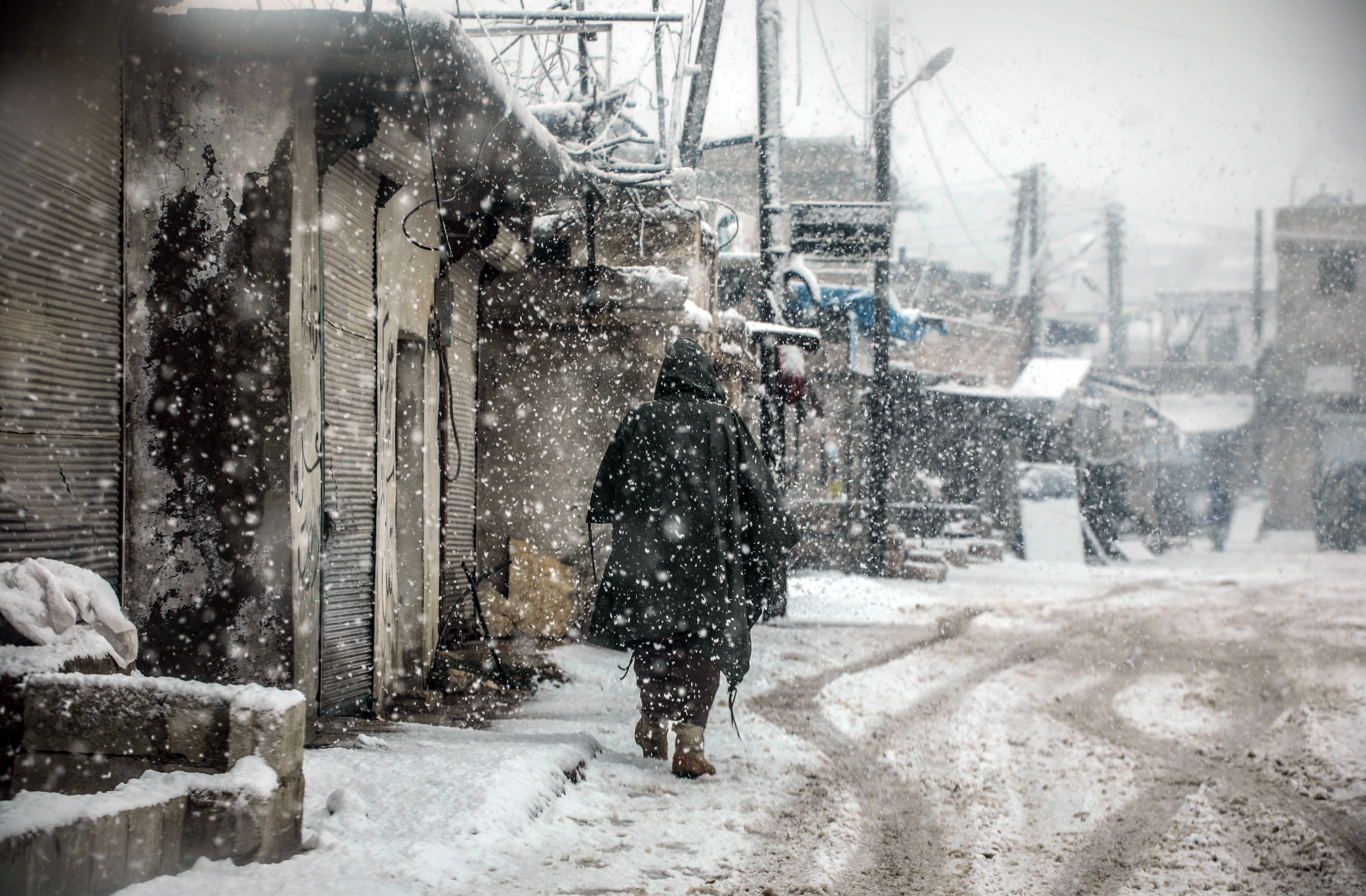 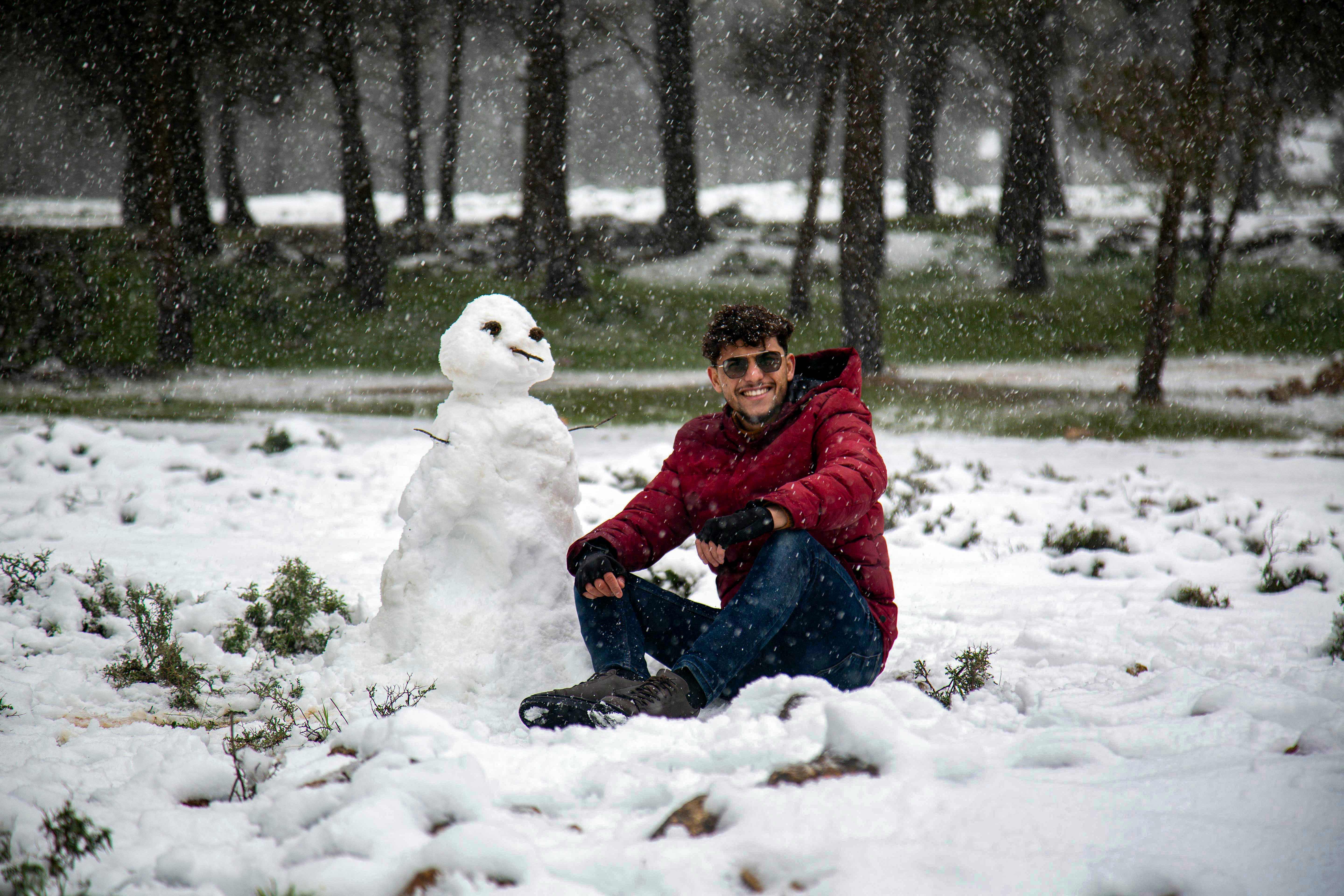 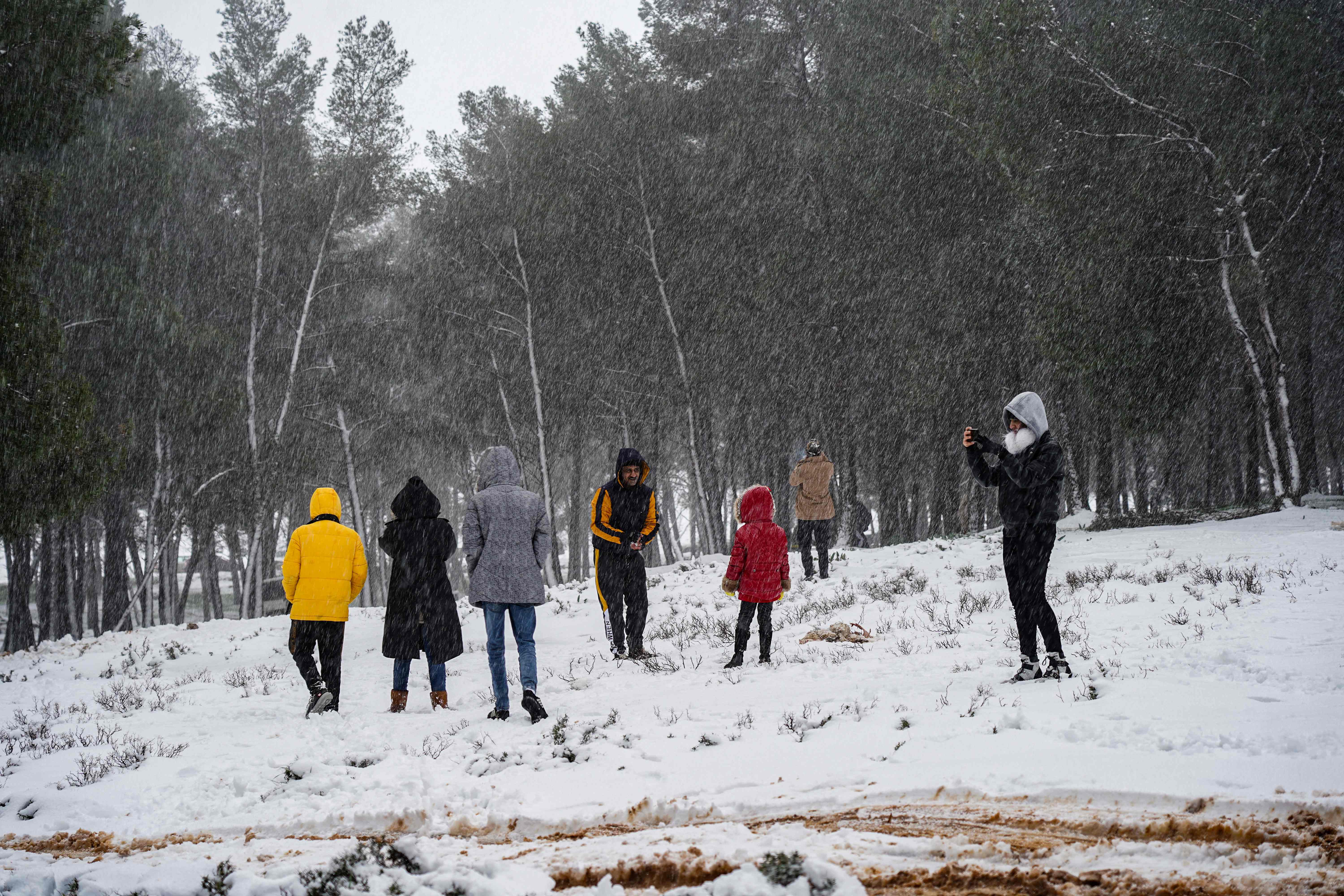 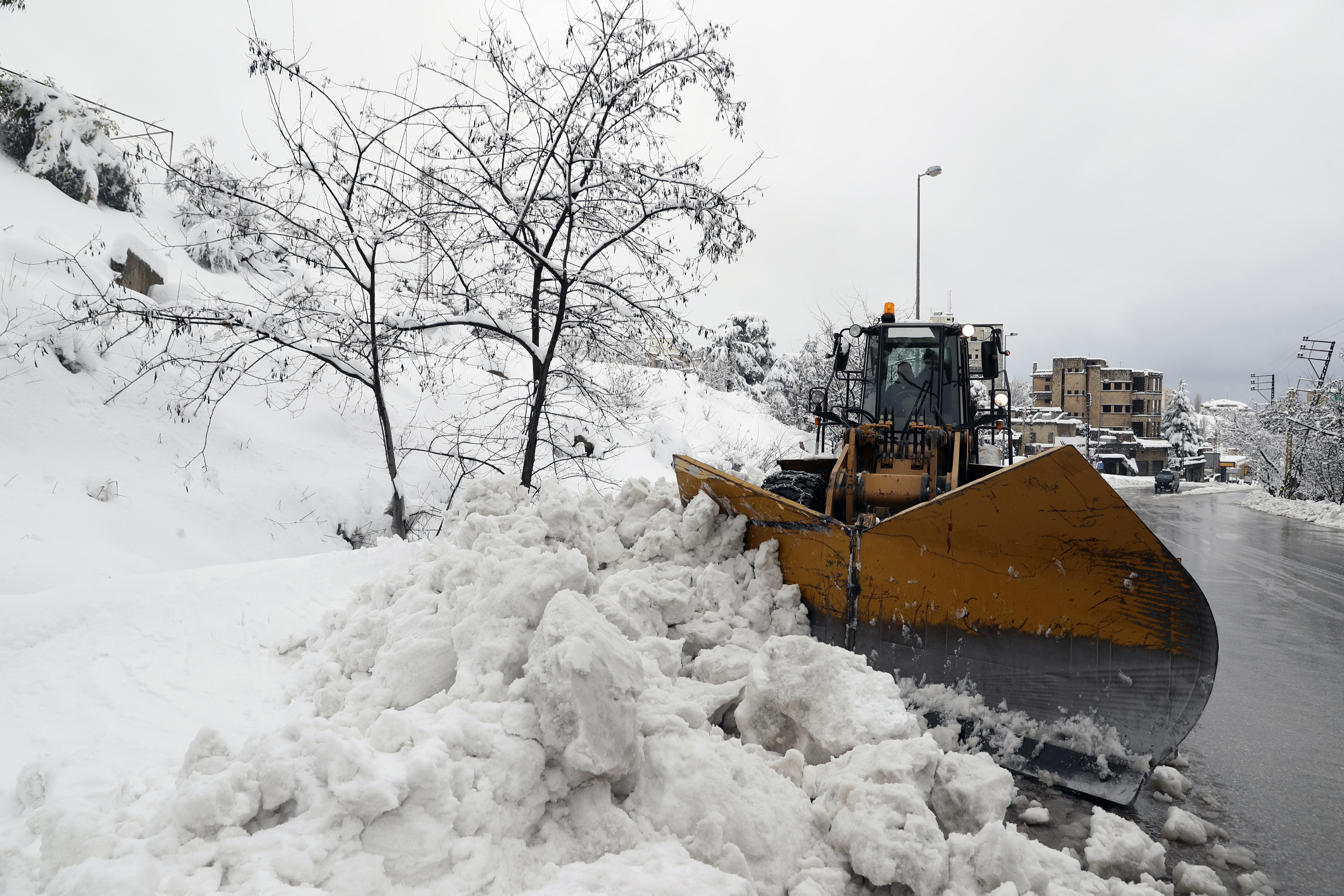 And blizzards have continued to cause havoc in Turkey.

In Istanbul, icy roads caused multiple car accidents and authorities said up to 50 cm of snow accumulated in some districts.

Elsewhere in Turkey, 22 people were injured after a passenger bus slid off a highway in the central province of Aksaray and overturned, the state-run Anadolu Agency reported.

In Jordan, the Covid-19 vaccination drive was suspended due to the severe weather conditions.

Yesterday was ruled as an official holiday for all workers due to the snow storm.

Even Greece called in the armed forces on Wednesday to help repair widespread damage caused by heavy snowfall in Athens.

The snowstorm, described by authorities as the most severe in 40 years, blanketed the city and its ancient monuments and left parts of the capital without power and water.

The region's unseasonably cold weather is set to last through the weekend in many areas.

The weather chaos is down to the "wobbling" polar vortex, which is usually held in place around the North Pole by the jet stream.

But the polar vortex and the jet stream sometimes weaken, meaning the ultra-cold Arctic air plunges southwards to areas of Europe and North America which are usually milder in the winter months.

Scientists have said warmer temperatures in the Arctic are likely throwing the polar vortex out of whack, bringing freezing temperatures and heavy snowfall to more regions.

Celebrities
Meghan Markle and Prince Harry: CBS teases Oprah interviewWhen you subscribe we will use the information you provide to send...
Lifestyle
Each minute of Prince Harry and Meghan's primetime interview with Oprah Winfrey seemed to contain another bombshell revelation, from the...
TV & Movies
CHRIS Harrison was seen for the first time since he made his controversial apology on Good Morning America, as he...
World News
How Meghan and Harry's royal racism claims differed: Meghan said 'concerns over how dark baby's skin might be' were raised...
Beauty
While the Covid-19 pandemic has halted the cadence of everyday life for just about everyone, the world is now beginning...
Fashion
GalleriesCollection Lucie and Luke Meier strongly believe in the power of clothes. They think that dresses enable individuals to express...
Recent Posts