Rep. Mace calls for razor-wire fencing to come down at US Capitol

‘Who are we protecting ourselves from?,’ GOP Rep. Nancy Mace asks on ‘America’s Newsroom.’

A Washington, D.C., judge on Wednesday ordered that a Georgia woman and her Tennessee son remain jailed pending trial on charges for their involvement in the Jan. 6 riot at the U.S. Capitol.

Lisa Eisenhart is accused of breaking into the Capitol with her son, Eric Munchel, who was photographed carrying flexible plastic handcuffs in the Senate chamber.

U.S. District Judge Royce C. Lamberth ruled that “no condition or combination of conditions of release will reasonably assure the safety of the community” if the two are released pending trial.

Both of them “supported the violent overthrow of the United States government” and pose a “clear danger to our republic,” the judge wrote.

Eisenhart’s attorney filed a notice Thursday that she is appealing the ruling.

In separate hearings late last month, a federal magistrate judge in Nashville had ordered them released to home confinement. Prosecutors opposed the release, and at their request, the judge stayed his order until it could be reviewed by the District of Columbia court.

U.S. District Chief Judge Beryl Howell, of the District of Columbia, then blocked the release of Eisenhart and Munchel pending a hearing and ordered them transported to D.C. for further proceedings. 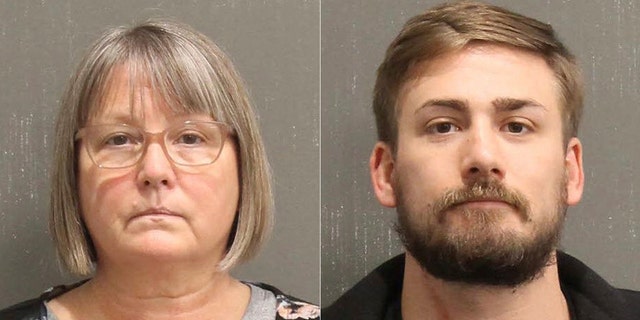 COVID-19-related complications slowed their transportation to Washington, and the two sought review of their detention, Lamberth wrote. The judge on Wednesday arraigned the two and prosecutors made a new oral motion for pretrial detention.

Prosecutors say the two wore tactical and bulletproof vests in the Capitol and Munchel carried a stun gun. Munchel also recorded their storming of the Capitol, and prosecutors say that video shows the pair stashed weapons in a bag before entering the building. A search of Munchel’s Nashville home turned up assault rifles, a sniper rifle with a tripod, shotguns, pistols, hundreds of rounds of ammunition and a drum-style magazine.

Lamberth wrote that the defense attorneys’ portrayal of the offenses “as mere trespassing or civil disobedience is both unpersuasive and detached from reality.”

The judge added that Eisenhart’s words after the riots were chilling — that she would “rather die … than live under oppression” and “would rather fight.”

“If Eisenhart does not fear the ultimate consequence, the consequences for disobeying release conditions are unlikely to deter her,” the judge wrote.

Likewise, the judge wrote that Munchel indicated after the riots that he was willing to take similar actions again, quoting Munchel saying: “the point of getting inside the building is to show them that we can, and we will.”

“He compared himself — and the other insurrectionists — to the revolutionaries of 1776, indicating that he believes that violent revolt is appropriate,” the judge wrote.

Both Munchel and Eisenhart are charged with violent entry and disorderly conduct on the Capitol grounds, conspiracy and civil disorder. They could each face up to 20 years if convicted.

Celebrities
Queen Elizabeth is addressing her nation. The monarch marked Commonwealth Day during an appearance on a BBC One television special...
Lifestyle
Scientists have identified a “space hurricane” ― an approximately 620-mile-wide whirling mass of plasma in the upper atmosphere above the...
TV & Movies
Grey’s Anatomy is one of the most popular medical dramas on television and has been a force to be reckoned...
World News
TRIBUTES have today been paid to a "lovely" mum allegedly murdered alongside her two-year-old daughter after disappearing from their home....
Beauty
While the Covid-19 pandemic has halted the cadence of everyday life for just about everyone, the world is now beginning...
Fashion
GalleriesCollection Lucie and Luke Meier strongly believe in the power of clothes. They think that dresses enable individuals to express...
Recent Posts