London: Julian Assange was "insistent" on redacting the names of Iraqi informants and even deployed software to remove Iraqi words from WikiLeaks cables which he later published in full, a prominent NGO told the Australian's extradition hearing.

John Sloboda who founded Iraq Body Count, a London-based NGO that tallies civilian casualties of the Iraq war gave evidence at London's Old Bailey, on behalf of the defence. 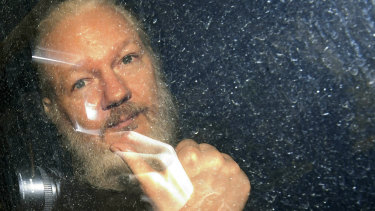 Julian Assange is driven from the Ecuadorian embassy in London after his arrest in April 2019.Credit:PA

The US Department of Justice wants Assange extracted to the United States so he can face 18 charges of computer hacking and for publishing the names of informants.

Sloboda, who worked with Assange and the WikiLeaks team on the Iraq war logs in 2010, said the Australian was determined to scrub sources' names from the documents before publishing.

"It was impressed upon us that the aim was a very, very stringent redaction of the logs before publication.

"That was the aim of Mr Assange and WikiLeaks," he told Assange's lawyer.

Sloboda said it would have taken an "army of people" "a very long time" to redact the files by hand and that it was his colleague who came up with the idea to develop software that would scrub non-English words from the documents.

He said redactions of occupations were also carried out to stop informants' identities being guessed.

He said this laborious process created tensions between WikiLeaks and the media outlets they were partnering with at the time, as the news organisations wanted to begin publishing documents they had already redacted. 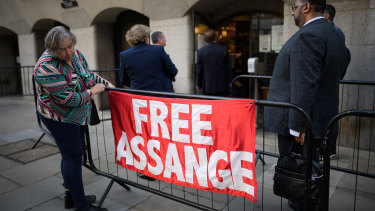 A supporter of the Wikileaks founder Julian Assange hangs a banner outside the Old Bailey on September 14, 2020 in London.Credit:Getty

Sloboda said he had no explanation for how the documents WikiLeaks published in October 2010 contained the names of informants.

"I have no explanation for that at all," he said.

"Might it be because Mr Assange took a cavalier attitude to the publication of these logs and to the redaction of persons who were placed at risk by their publication?" Lewis asked.

"I imagine the alternative is that some element of the redactions, for some unknown reason … the redaction program allowed those names to remain in the document, but that simply is conjecture."

Assange has spoken out in court to deny he put lives in harm's way. He faces a combined sentence of up to 175 years if convicted of all counts in any trial. His extradition hearing is expected to run until October.