Archie Herbet has been attending childcare since he was a baby, and most winters he has a cold, constantly.

"It’s the reality of childcare and kinder," said his mother, Mandy Herbet. "They touch things and they’re not exactly social distancing, so it’s expected." 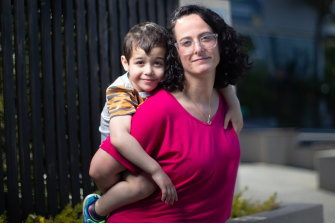 But this year has been different. Many Victorian childcare centres, which typically tolerate children with sniffles or other signs of a cold, have been sending them home.

Strict new state government guidelines for schools and early childhood services require children who have even the mildest symptoms of coronavirus, including runny noses, to be tested for the virus and stay away until all signs of sickness are gone.

Many parents are also banned from entering childcare centres, with preschoolers escorted from the front door to their rooms by teachers after they pass fever screening stations.

"We have to hand over our child to an unnamed stranger in the car park, who then takes them to the room," said one parent. "This has been distressing and confusing for children."

The government's tough new illness advice has the support of key medical and industry groups.

But some parents have questioned the necessity of excluding children with runny noses and other mild signs of illness, arguing snotty noses are an unavoidable part of childcare, especially in the first year. There is also concern the policy unfairly affects those prone to hay fever, asthma or ear infections.

North Melbourne father Dan Wilkins was one of about a dozen carers who contacted The Age concerned the new rules had gone too far, saying his two-year-old daughter recently had to stay home from childcare for days with a runny nose, even after receiving a negative COVID-19 test.

He said the centre previously enforced a policy that required children to stay home only if they had overt signs of sickness, such as green snot or a fever.

Other parents such as Ms Herbet, whose five-year-old son is in kinder in Bentleigh, said she appreciated the harder-line approach.

"Too often if it’s not communicated clearly, people find loopholes," she said.

"The rule has been that if anyone in the family is unwell or waiting for a COVID test result, nobody from that family can attend or enter the centre until all results are clear and a medical certificate has been obtained."

Julie Price, executive director of the Community Child Care Association, which represents about 600 non-profit providers, said most Victorian centres seemed to be enforcing the government advice.

She said it was "harsh and hard" for families and also staff and services, which had to cope with more absenteeism as workers were sent home with mild symptoms.

But she said it was necessary to ensure people’s safety after the punishing second wave of the virus in Victoria.

"More often it is just a snuffle, but it would be awful if services let a child or staff member come in and they tested positive some time later and there had been a lot of transmission in the centre."

A Victorian Health Department spokeswoman confirmed that children should not attend childcare when sick, even if they had the mildest symptoms.

She said people caring for a child who must isolate may be eligible for support payments if unable to get paid leave.

"We understand this can be difficult for some working families, but one of the most important things we can do to slow the spread of this highly infectious virus in our community is to stay at home when we are unwell, even when we have the mildest of symptoms," she said.

The government advice has the backing of the Royal Australian College of General Practitioners.

Melbourne GP Billy Stoupas, whose 18-month-old son attends childcare, said he understood how challenging it could be for parents, because it was so common for children to pick up bugs as their immune systems developed.

"You can’t stop a child from running across the room and hugging another child or putting something in its mouth, and then another kid picking it up and doing the same thing," he said.

However, he said if the rules were enforced, there should be a reduction in coughs and colds.

He also supported the Victorian government's approach, agreeing young children should be tested even if they had mild symptoms.

"Children are not the drivers of this pandemic, but they are important and they do need to be tested, especially if they have symptoms of a fever and cough," Professor Booy said.

AMA Victoria president Julian Rait said it was appropriate that childcare centres followed the department’s guidelines, but whether the department’s rules were justified based on the epidemiological evidence was another question.

"I don't think it would have been as fully studied as you would like," he said.

Associate Professor Rait said while children aged under 10 could catch coronavirus, they appeared more likely to spread it to close family members than childcare workers.

Get our Coronavirus Update newsletter for the day’s crucial developments and the numbers you need to know. Sign up to The Sydney Morning Herald’s newsletter here and The Age’s here.