Brussels: Kosovo President Hashim Thaci has resigned to face war crimes charges in The Hague, becoming a high-profile target of international efforts to bring justice to victims of the two-decade conflict that led to the country's independence.

In a single extraordinary day, the most powerful man in Kosovo went from the president's office to a custody cell in The Hague, facing an indictment that accused him of being a member of a "joint criminal enterprise" that conducted "abductions, detentions, mistreatment, and killings" against opponents of the Kosovo Liberation Army (KLA), the guerilla force that won the nation's sovereignty from Serbia with the help of a 78-day NATO air campaign in 1999. 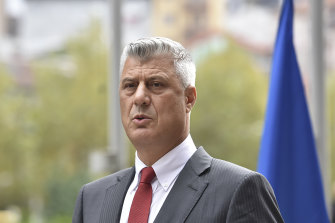 Kosovo President Hashim Thaci addresses the nation to announce his resignation to face war crimes in The Hague.Credit:AP

A special prosecutor in The Hague announced preliminary indictments against Thaci in June, just days before he was to attend a White House meeting with Serbian President Aleksandar Vucic intended to achieve a breakthrough between their countries. US President Donald Trump has made normalising relations between the two countries a foreign policy priority.

The allegations date to Thaci's time as a commander in the guerilla in incidents between March 1998 and September 1999. As a senior leader in the guerilla force, Thaci knew of killings, torture and other persecution of civilians believed to be opponents and did not act to stop the crimes, according to the indictment.

The court said on Thursday that Thaci and other top guerilla officials were responsible for a "widespread and systematic attack against persons suspected of being opposed to the KLA."

Thaci told reporters in Pristina, the capital, that he was stepping down "to protect the integrity of the presidency of Kosovo" before flying to the Netherlands. He has denied the charges. Vjosa Osmani, the head of parliament, has taken over as acting president pending the election of a new leader. 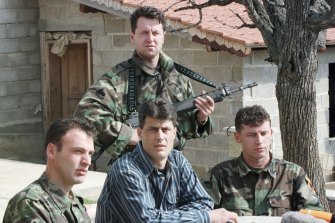 Hashim Thaci, then head of the Kosovo Albanian negotiation team and of the Kosovo Liberation Army political directorate, centre seated, addresses a press conference in a secret location in central Kosovo in 1999.Credit:AP

Thaci had been president since 2016. He has been a dominant figure in his country's political life for decades, evolving from separatist militia leader into a politician once the territory achieved autonomy from Serbia. He was prime minister of Kosovo when it declared independence in 2008.

Other top KLA officials, many of them active in political life, also face charges. Kadri Veseli, Thaci's successor as the leader of the Democratic Party of Kosovo, also resigned his position on Thursday and voluntarily went into custody in The Hague.

"I see it as an opportunity to finally respond to these false suspicions and rumours which have been circulating for years," Veseli said in a statement.

On Wednesday, Jakup Krasniqi, another former KLA leader, was arrested in Pristina and transferred to The Hague. Krasniqi is a former speaker of parliament.

The special Chamber in The Hague is staffed with international judges and prosecutors but operates under Kosovo law.

The 1998-1999 war in Kosovo between Yugoslav forces and the KLA ended after a 78-day NATO air campaign. It led, nine years later, to Kosovo's declaration of independence. Serbia never recognised its neighbour's statehood, and the unresolved borders have prevented full stability in the Balkans ever since. European officials have said the conflict must be resolved before Serbia can join the European Union.

The European Commission "welcomes" Thaci's decision to submit to the court proceedings, Peter Stano, a spokesman for EU foreign policy chief Josep Borrell, said in a statement. "Full cooperation with these institutions is essential as an important demonstration of Kosovo's commitment to the rule of law."

Thaci has been negotiating for years with Vucic, who was on the other side of the Kosovo war as a minister in the Federal Republic of Yugoslavia, to normalise relations between Pristina and Belgrade. But the two sides have not been able to agree on what to do about pockets of ethnic Serbs in Kosovo and Albanian-speaking communities within Serbia.

Trump deputised Richard Grenell, a former ambassador to Germany and acting national intelligence director, as an envoy to try to resolve the conflict.

Trump ultimately met in September with Vucic and Kosovo Prime Minister Avdullah Hoti in the White House, where the two sides announced an agreement to bolster their economic ties. But a full, final mutual recognition has remained out of reach.