KYLIE Jenner ditched her usual glam style and dressed down in sweatpants and slippers in a new selfie.

The 23-year-old’s casual, baggy look comes as fans have been speculating she’s pregnant with her second child. 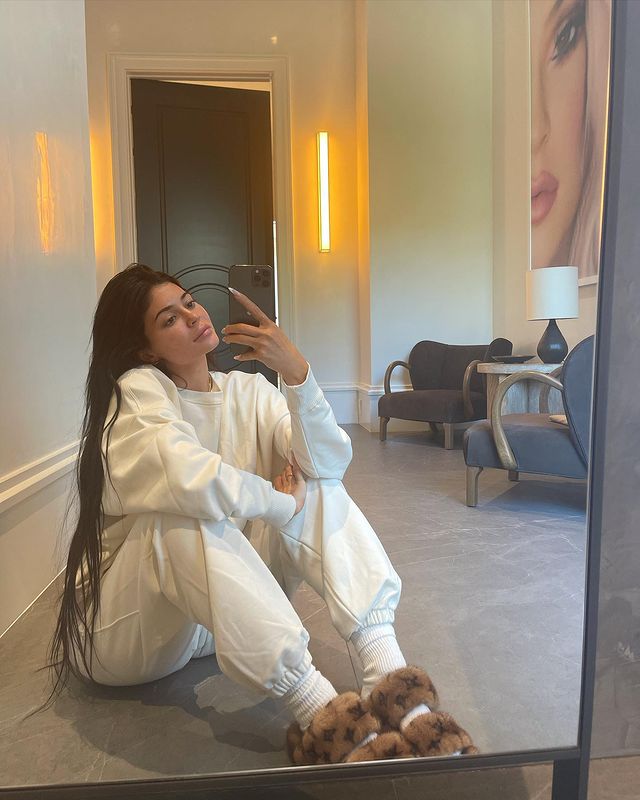 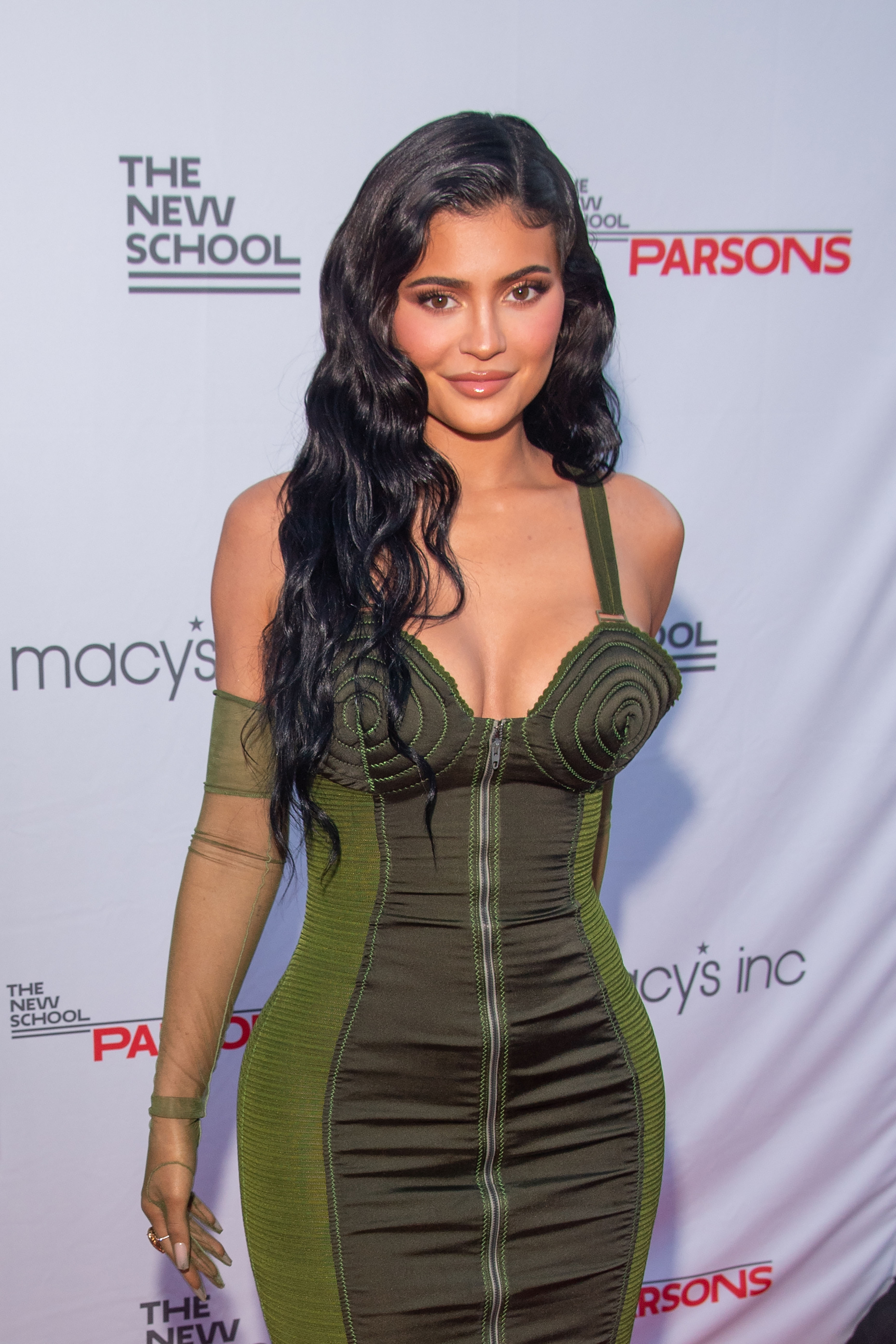 Gearing up for her birthday on Tuesday, Kylie has been sharing sneak peeks on social media of her new beauty collection launching on her big day.

The Keeping Up With the Kardashians star took a break from that Friday night to give fans a scattered look at her life lately with a “photo dump.”

Included in the photo gallery was a snap of the dark-haired beauty enjoying a casual, relaxed day at home.

She traded in her usual tight dresses for a matching white sweat set of a baggy top and loose-fitting joggers.

On her feet, Kylie kept cozy in a pair of fuzzy, brown Louis Vuitton slippers, while continuing the casual look with her long hair left down, coming down past her waist, and her face make-up free.

Kylie first sparked pregnancy rumors in late June after she appeared not to take a tequila shot during the KUWTK reunion.

Fans then noticed that the beauty mogul was eating sushi that appeared to have no fish at all and just avocado.

Kylie became pregnant with her first child Stormi in 2017 and gave birth to the tot – who she shares with Travis Scott – in February 2018.

The reality star managed to keep her pregnancy a secret for the whole nine months and shocked fans with her baby announcement.

She hinted recently that she's definitely not expecting by filming herself eating fish and drinking an alcoholic seltzer drink.

She appeared to be shutting down the rumors once again in her latest post, as one of two photos featured her svelte figure in different figure-hugging black dresses.

In one of them, she was also holding a glass of red wine as she was just about to take a sip.

The other snaps in the new Instagram collection featured ones of countless white roses lining her hallway, her shiny car, and a perfect plate of pasta with red sauce and a sprinkling of cheese.

Photos of a red-tinted sky at night, two cups of coffee with milk, and Kylie's daughter Stormi wandering around outside while holding a smartphone were also included in the new post.

Amid pregnancy rumors, the reality star has also worked to shut them down by posing in cropped clothing to show off her flat stomach.

The cosmetics mogul recently promoted her "24K BIRTHDAY COLLECTION," which arrives on her birthday, in just a gold see-through bra and tiny skirt, exposing her toned abs.

In another shot, Kylie posed nude while the rest of her skin was covered up in gold paint.

Though she was topless, the Kylie Cosmetics founder had her hands on top of her bare boobs.

Kourtney Kardashian also shared a shot of her and Kylie working out, both of them wearing nothing but a sports bra and tight black leggings.

Kylie held up her phone and took the mirror photo from the side, showing off her flats abs, tiny waist, and the rest of her hourglass figure, working to squash the baby rumors. 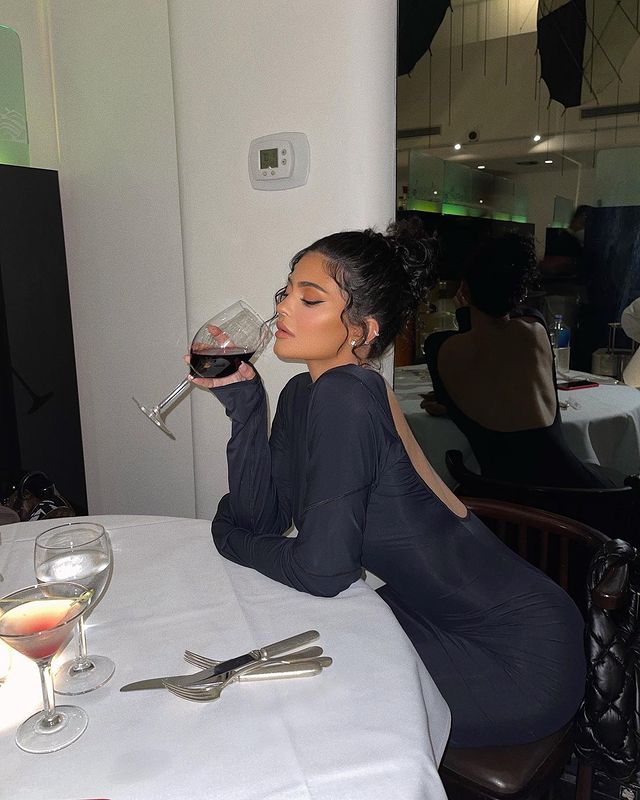 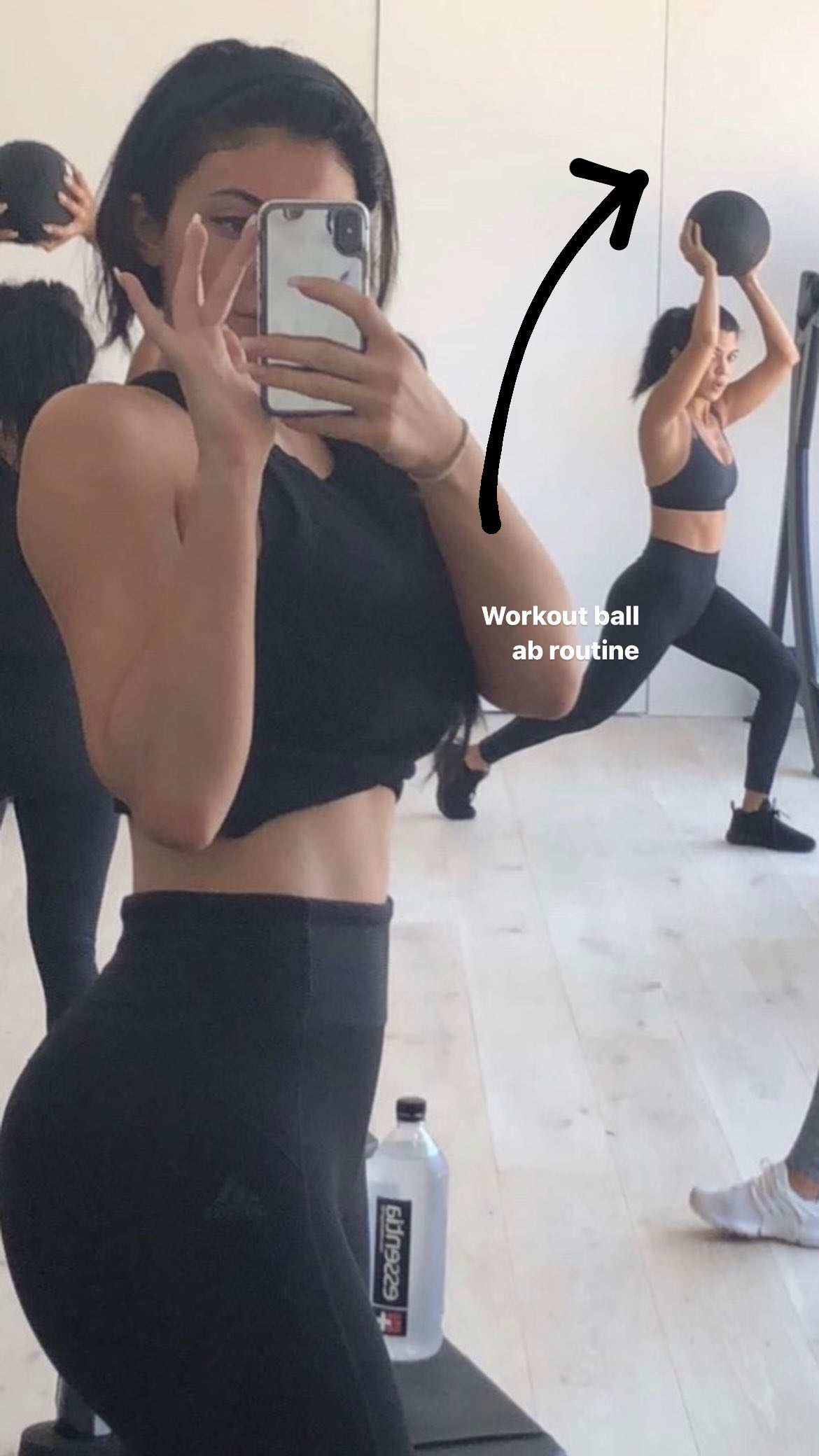