BBC Weather: Torrential downpour to hit parts of the UK

Netweather’s temperature charts show that between July 16 and 18, the mercury in large parts of the UK will rise to as high as 28C (82.4F). Netweather’s charts, based on GFS model data, turn dark red across England, Wales and Southern Scotland with the high pressure sweeping in from the Azores.

The mercury could reach as high as 28C (75.2F) in southeast England and London on July 17 as high pressure sits over the UK. 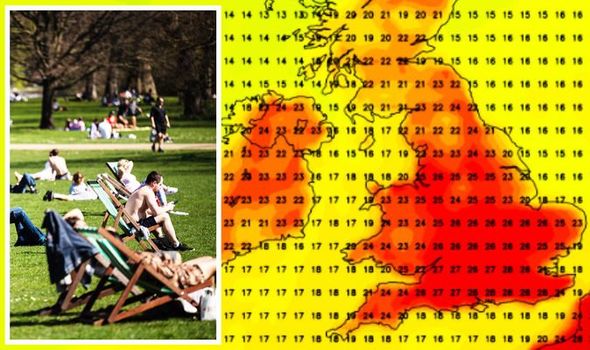 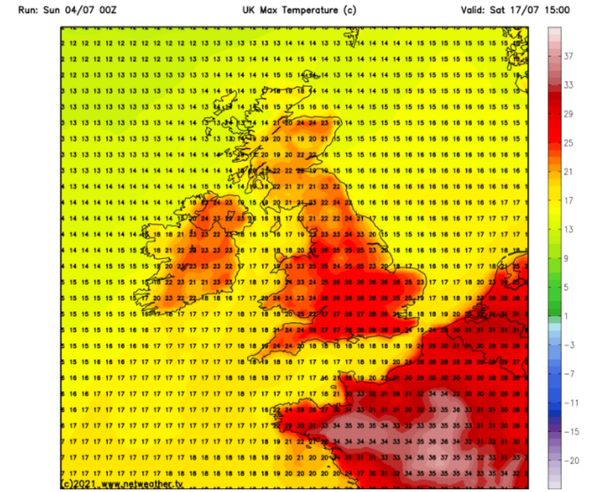 Netweather’s long-range forecast between Monday, July 12, and Sunday, July 18 also predicted temperatures could be much warmer.

The forecast said the pressure is expected to be “relatively high to the north of Britain and over Scandinavia.”

The forecast suggests a high-pressure ridge will drift north-eastwards from the Azores and link with a Scandinavian high, covering much of the British Isles.

It added: “This points towards drier and more settled conditions generally for much of the UK, and probably a fair amount of sunshine for most” 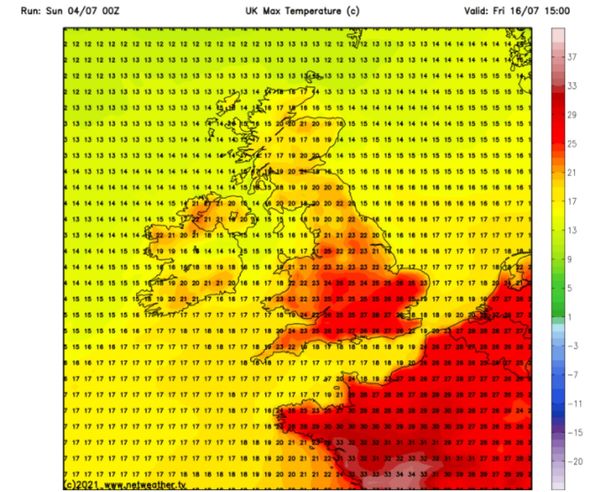 Brian Gaze, Forecaster at The Weather Outlook, added: “There is a clear warming trend showing on the table.

Meanwhile, a rainfall yellow weather warning has been issued by the Met Office for a large part of the country today.

This covers northern parts of England, a large majority of Scotland and Northern Ireland with forecasters saying there is a potential for hail. 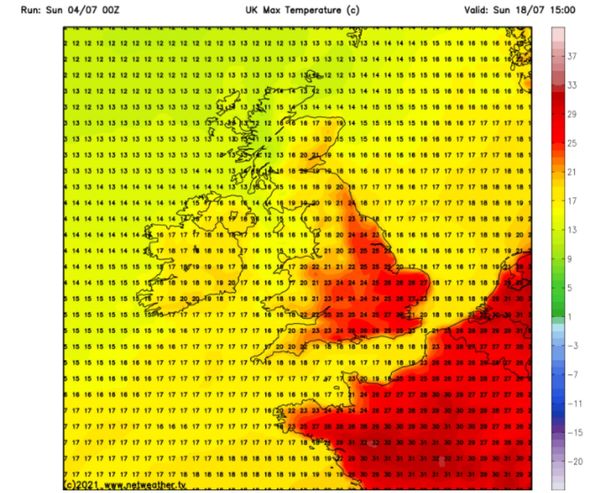 Sunny spells meanwhile are predicted for the South and Midlands in England and across Wales on Sunday with highs of 22C, which is slightly below average for this time of year.

Greg Dewhurst, a senior meteorologist at the Met Office, said: “Our main message throughout the whole weekend is there is likely, wherever you are in the UK, to be some heavy showers around.

“Be prepared if you’re travelling over the next couple of days with those heavy, heavy thunderstorms around.”

Overnight tonight, it will be damp for many, with rain for much of Scotland, Northern Ireland and England, and showers for Wales.

However, the rain is going to be heavy for southern and central Scotland as well as northern England after midnight with gentle south-westerly winds.

The mercury tonight will see temperatures across the country range between 12C (53.6F) and 16C (60.8F), which is also the case in Scotland. 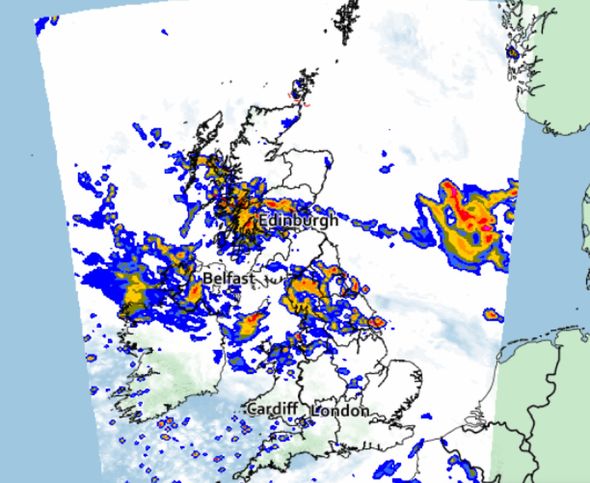 Going into Monday, there will be rain for Scotland and northern England, often heavy in parts of Scotland.

There will be scattered showers in southern areas throughout the day, while rain will arrive into southwest England during the evening and this rain will be heavy in places.

Temperatures tomorrow will range between 13C (55.4F) and 20C (68F) with the highest in east and southeast England.

Celebrities
Fern Britton jokes about her Saturday night plansWe use your sign-up to provide content in ways you've consented to and...
Lifestyle
Bars and restaurants are once again at the forefront of a polarizing business decision 16 months into the pandemic: Whether...
TV & Movies
Outer Banks Season 1 introduced fans to the beloved character JJ (played by Rudy Pankow), a mischievous, daring teen and...
World News
By Lauren McCarthy What a difference a week makes. In just a few days, state and local authorities have imposed...
Beauty
I haven't always been a big fan of shampoo bars. Even though they're known for being a more sustainable alternative...
Fashion
A MUM has been accused of ‘raising an assassin’ after taking her four-year-old daughter hunting. Stay-at-home mum Jesica Murphy, 23,...
Recent Posts