Paris: Results from the first round of parliamentary elections in France show the centrist camp of French President Emmanuel Macron is well-positioned to secure the largest number of seats in parliament, but main polling institutes say he could still lose his majority next week.

Macron’s Ensemble alliance of centrist parties won 25.75 per cent of the popular vote on Sunday, according to the Interior Ministry’s final tally. That gives it a razor-thing edge over his main left-wing opponent Jean-Luc Melenchon. Melenchon’s Nupes bloc came in second with 25.66 per cent of votes cast. 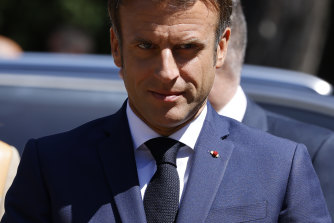 French President Emmanuel Macron arrives to vote in the first round of parliamentary elections on Sunday.Credit:AP

Manuel Bompard, one of Melenchon’s most senior allies, himself running for a seat in Marseille, called into question the credibility of the result.

Bompard claimed the Nupes had won some 200,000 more votes that were not accounted for in the final results, without presenting any evidence for his assertion.

According to a forecast by the pollster Elabe, Ensemble is set to win between 260 and 300 parliamentary seats – with an outright majority secured at 289 – while the left would secure 170-220 seats, a big increase from 2017. 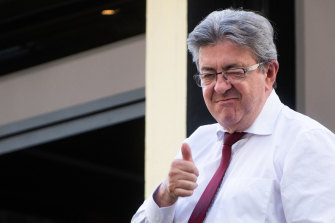 Jean-Luc Melenchon, leader of the France Unbowed party, wants to be prime minister.Credit:Bloomberg

With rampant inflation driving up the cost of living and eroding wages, re-elected Macron has struggled to build on his April win, with Melenchon casting him as a free-marketeer more intent on protecting the wealthy than hard-up families.

Melenchon came third in the presidential ballot and was written off as a spent force, along with other left-wing parties. But his fortunes reversed after communists, socialists and greens coalesced around him to form Nupes, and he eclipsed the far-right’s Marine Le Pen to become Macron’s biggest challenger.

The 70-year-old leader of France Unbowed has repeatedly called on his voters to turn out in force so that Nupes (New Ecologic and Social People’s Union) becomes the largest bloc, arguing Macron will then name him prime minister. Macron has indicated he won’t do that – though French presidents have tended to choose a head of government from within the new house majority.

Macron now has a week to convince people to vote and give him an outright majority in next Sunday’s run-off to ease the way for the controversial social and economic reforms he promised.