Probe into the murder of journalist Daphne Caruana Galizia has stoked fury on the Mediterranean island. 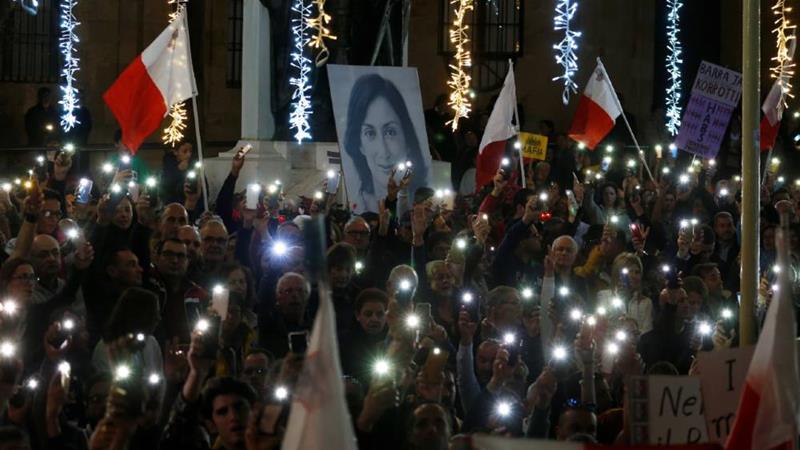 Thousands of protesters have surrounded the Maltese parliament building in Valetta, demanding the prime minister immediately step down.

Prime Minister Joseph Muscat on Sunday announced he would resign in January amid growing public anger over the 2017 killing of investigative journalist Daphne Caruana Galizia.

Protesters want Muscat to leave office now, and up to 4,000 demonstrators surrounded parliament on Monday evening.

The investigation has seen Yorgen Fenech, a prominent businessman with alleged ties to government ministers and senior officials, charged with complicity in the murder. The 38-year-old pleaded not guilty to that and other charges.

The prime minister’s chief of staff and other prominent political figures have also been questioned by the police regarding complicity in the murder of Caruana Galizia.

“There are some extraordinary scenes here,” said Barker. “A very large crowd is surrounding the building. Why? Because government ministers have been trapped here – though we are hearing that the prime minister himself may have escaped.”

Caruana Galizia’s son Andrew told Al Jazeera he hoped that it could be a real turning point for the country.

“Two years ago we hoped that my mother’s assassination would be enough for people to realise that organised crime had taken office in this country,” he said. “But it wasn’t enough – and that’s a lesson about the power of propaganda and how it sows doubt in people’s minds, people who knew instinctively that my mother had been murdered by someone very powerful in government in this country, but who for two years were confused and were led to believe that it was low level criminals.

“Now we know the truth, that the government itself was involved in my mother’s assassination,” he said.

Earlier on Monday, Muscat defended his government’s handling of the murder investigation and called for national unity after days of protests over a case that has stunned Malta.

Opposition lawmakers walked out of parliament in protest, hurling bundles of fake cash at the government benches as they left the chamber. Outside the building, hundreds of protesters chanted “Mafia, mafia”.

Speaking to a semi-empty house, Muscat appeared relaxed, joking at times as he justified the investigation, which he said was Malta’s biggest ever.

“The case showed that Malta’s institutions work and everyone is equal before the law,” he said.

Fenech has denied being the mastermind of the killing and sought legal immunity in return for revealing information about the murder plot and about alleged corruption involving Muscat’s former chief-of-staff Keith Schembri and former Tourism Minister Konrad Mizzi, among others, court filings showed.

The government has rejected his bid for a pardon.

Schembri and Mizzi both resigned last week and have denied wrongdoing. Schembri was questioned for two days by police following his resignation before being released without charge.

Both men had been suing Caruana Galizia for libel over allegations she made about their business deals.  A leading investigative journalist, she was part of the team who published “The Panama Papers”, a global investigation detailing the shadowy efforts of the super-wealthy to conceal money and power from tax authorities and others.

The mother of three, described as a “one-woman WikiLeaks”, was killed in a car bombing near her home in October 2017.

Fenech, arrested as he tried to flee the island on his yacht, has claimed Muscat’s former chief-of-staff Schembri was the “real mastermind” behind the killing, according to police sources.