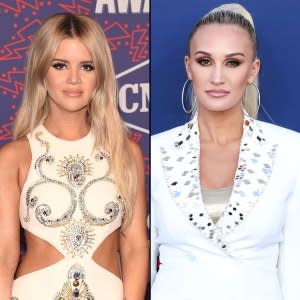 Near to her heart. Maren Morris explained why she gets so wound up when it comes to issues affecting the LGBTQ+ community after her recent clash with Brittany Aldean.

The 32-year-old songwriter opened up about her passionate stance during an eye-opening interview with GLAAD ahead of the organization’s annual Spirit Day campaign. Morris recalled growing up in Arlington, Texas, and being surrounded by the queer community from a young age.

“It was always just very normal,” she explained on Thursday, September 29, noting that she was involved in theater throughout school and had gay-identifying friends. “My mom was really close to her uncle growing up, who sadly died in the early ’90s of AIDS. It was just always a conversation in our household that we’re all the same and there is no ‘us’ and ‘you.’ … I definitely feel like it hits closer to home for me now, having a son — and I have gay family members.”

Morris pointed out that she “didn’t realize how important” that mindset of equality was until she became an adult and started “solidifying” her own views. Welcoming her first child, son Hayes, in 2020 with husband Ryan Hurd also put the topic into a new perspective.

“That’s all I can do going forward with my son is have those same conversations so it’s not even a complex or a thing, because it shouldn’t be,” she added. “I definitely get heated because … we’re talking about people’s lives. I do get extremely emotional when I talk about it.” 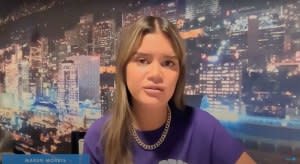 The “My Church” artist recently made waves on social media after dissing Aldean, 33, for an Instagram caption that many interpreted as being transphobic. “I’d really like to thank my parents for not changing my gender when I went through my tomboy phase. I love this girly life,” the former American Idol contestant, who’s married to Jason Aldean, wrote in August.

Cassadee Pope was quick to call out the offensive post, tweeting at the time, “You’d think celebs with beauty brands would see the positives in including LGBTQ+ people in their messaging. But instead, here we are, hearing someone compare their ‘tomboy phase’ to someone wanting to transition. Real nice.”

Morris chimed in with a comment of her own, adding, “It’s so easy to, like, not be a scumbag human? Sell your clip-ins and zip it, Insurrection Barbie.”

The “Circles Around This Town” artist shed more light on her reaction on Thursday, telling GLAAD’s Anthony Allen Ramos that she was moved by “the empathy bone you get when you’re a parent.” She continued, “I think you’re even more sensitive to disinformation and bullying. … Sadly, there are a lot of people that believe things that are just simply untrue about trans youth and gender affirming care and what it actually entails.”

Though it makes her “emotional,” Morris noted that it’s important to have “hard conversations” from the place of a “loving heart” — even with those who disagree. “You’re coming from a good place,” she explained. “But I don’t think you can do this all the time with, like, sunshine and rainbows. I think you have to have the tough conversations so people, like, understand what’s actually going on and you could actually save someone’s life having the right information.”

As the country feud gained more attention, Brittany continued to double down on her opinions. “Advocating for the genital mutilation of children under the disguise of love and calling it ‘gender-affirming care’ is one of the worst evils,” she claimed in an August Instagram Story, adding, “Love is protecting your child until they are mature enough as an adult to make their own life decisions.”

The YouTuber later appeared on Fox News’ Tucker Carlson Tonight, revealing that she was “surprised” by the level of backlash she received for her thoughts. “I think I’m advocating for children. I think that children should not be allowed to make these life-changing decisions at such a young age. They are not mature enough,” Brittany said on September 1, noting that there could be “huge consequences” to undergoing gender-affirming procedures.

During the interview, a chyron reading “Lunatic Country Music Person” appeared beneath a photo of Morris. The diss inspired the Grammy winner to create a T-shirt and donate money for GLAAD’s Transgender Media Program and Trans Lifeline. She raised more than $150,000. For Spirit Day, she designed a new shirt that reads, “You Have a Seat at This Table.”

Morris noted on Thursday that it can be “polarizing” to speak her mind in the public eye, but she relies on a strong support system. “The internet is such a vacuum. … When I zoom out and look at my community of friends and peers within Nashville, country music and other genres, the people I work with coming out in support of this cause and me … I definitely felt the love more than the hate. So that was encouraging.”