The Punisher has always been one of the more extreme characters in the Marvel Comics pantheon. Now, the gun-toting vigilante is getting an extreme … makeover. In the upcoming 13-issue prestige series, Punisher — set to hit comic-book store shelves in March — Frank Castle trades in the skull symbol that has been part of the character's costume since his 1974 debut in the pages of The Amazing Spider-Man and has also adorned his appearances in other media, including the two-season Netflix series that starred Jon Bernthal.

The first images from Punisher, which is written by Jason Aaron with art by Jesús Saiz and Paul Azaceta, reveal the redesigned skull, which now sports horns and sharpened teeth to reflect his new role as a member of the Hand, a shadowy league of assassins. "This story is the destined next step in the dark and tragic evolution of Frank Castle, from troubled kid to heroic soldier to revenge-driven vigilante … to the duly anointed King of Killers," Aaron remarks in a press release obtained by Yahoo Entertainment. "Believe me when I say, I am as excited about this story as anything I’ve ever written for Marvel." 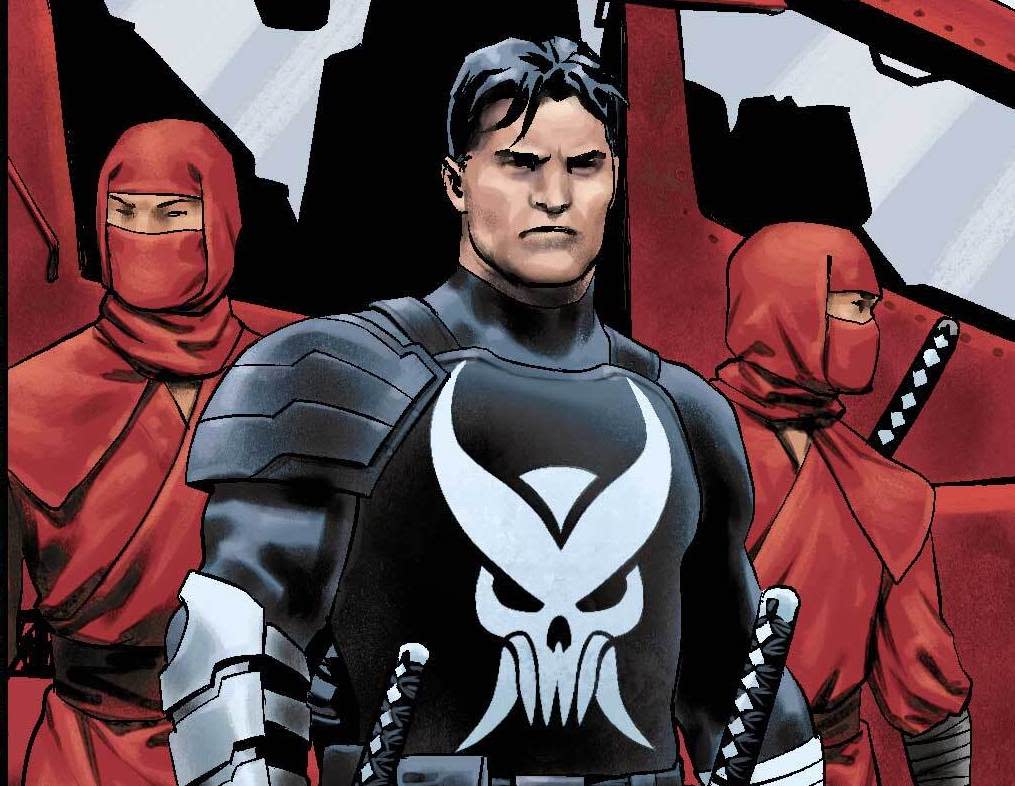 In recent years, the Punisher's original symbol has been appropriated by police officers and soldiers, much to the chagrin of the character's co-creator, Gerry Conway. "The vigilante anti-hero is fundamentally a critique of the justice system, an example of social failure, so when cops put Punisher skulls on their cars or members of the military wear Punisher skull patches, they're basically siding with an enemy of the system," he told Syfy Wire in 2019. "He is a criminal. Police should not be embracing a criminal as their symbol." 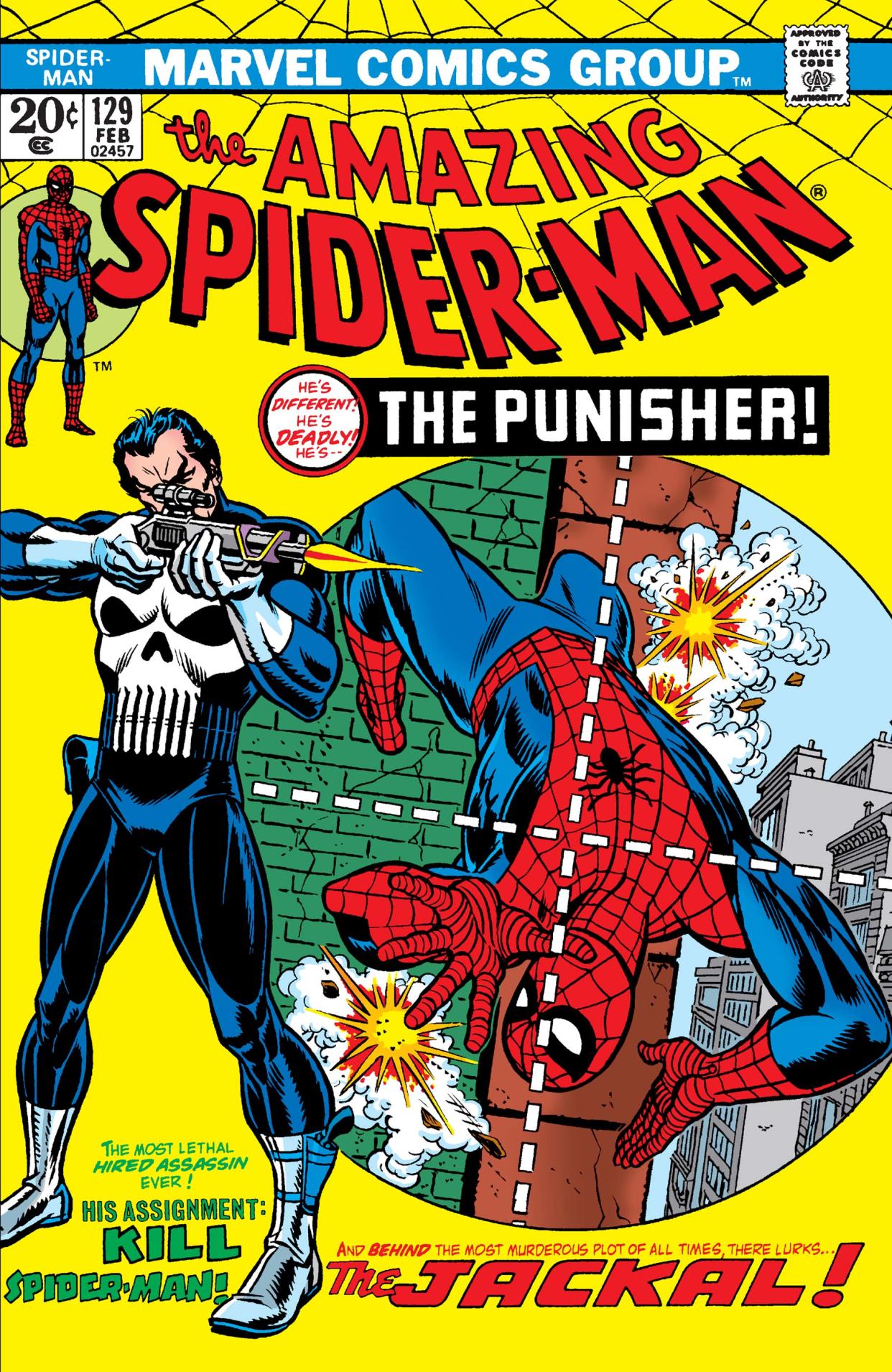 Following the death of George Floyd in police custody last summer, Conway launched the online Skulls For Justice fundraiser to benefit Black Lives Matter and "reclaim" the skull symbol. "For too long, symbols associated with a character I co-created have been co-opted by forces of oppression and to intimidate black Americans," Conway wrote on the campaign page. "This character and symbol was never intended as a symbol of oppression. This is a symbol of a systematic failure of equal justice. It’s time to claim this symbol for the cause of equal justice and Black Lives Matter."

Until now, the closest that Marvel has come to directly acknowledging the controversy appeared in the pages of a 2019 issue of the most recent Punisher comic. Written by Matthew Rosenberg, the issue features a pointed scene in which Castle encounters a group of New York City cops who boast about having a decal of his symbol on their car. “We believe in you,” one of them remarks. But the Punisher immediately rejects their hero worship, ripping their prized decal to shreds. “I’ll say this once. We’re not the same,” he remarks. 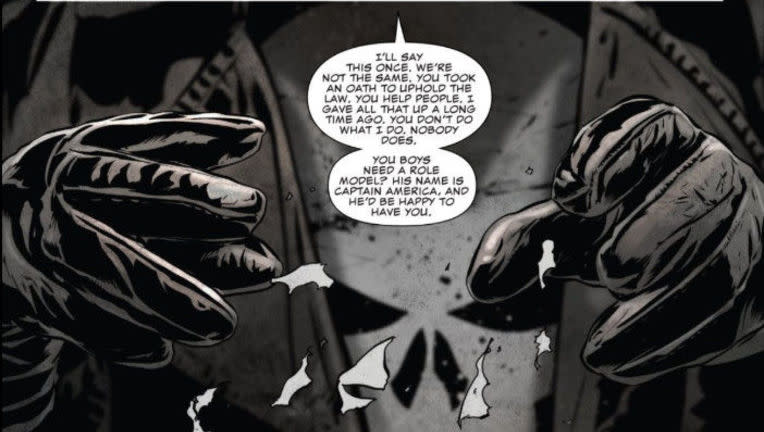 Earlier this year, calls for Marvel to address the misappropriation of the Punisher's trademark symbol increased in the wake of the Jan. 6 insurrection at the U.S. Capitol, where several of the rioters were seen wearing a familiar skull. Those images prompted Bernthal to make his feelings known on Twitter, calling the rioters "misguided, lost and afraid."

I’m with you. Beautiful work. These people are misguided, lost, and afraid. They have nothing to do with what Frank stands for or is about. Big love. J. https://t.co/Q4GpaGW3ek

Aaron's Punisher series is being positioned as the "definitive culmination" of Frank Castle's journey so far, and a portent of the dark future that's ahead for the character. "The story Jason is telling — a truly epic tale about darkness, violence, and choices — can only be told with the Punisher at its core," remarked Marvel editor-in-chief C.B. Cebulski. "This series will build on Frank’s legacy while introducing us to a side of him we’ve never seen before, setting the stage for an evolution that we’ll find was inevitable."

As expected, the Punisher's redesign has provoked strong reactions pro and con on Twitter.

Punisher wore a human skull on his chest because it represented death. This looks like an advertisement for a dude wanting to be a demon-slayer but couldn't afford any of the additional DLC options. https://t.co/tdVRAsrIhQ

Got rid of his guns and replaced it with swords.

Got rid of his iconic skull logo and replaced it with some horned demon symbol.

Went from murdering the mafia to being the leader of the Hand.

Why call it the Punisher? Just make a new character at this point. https://t.co/Lew4arAyBI

The Punisher is back as the new leader of The Hand? Wasn’t that a Daredevil storyline? I personally would’ve preferred him hunting down a terrorist cell of white supremists – not for planning another uprising but for trademark infringement 😂 pic.twitter.com/9zgY6EnFE6

I don’t normally read the punisher. I’ve read a few of his comics but I don’t understand why people are up and arms about the costume change. I think the reasoning behind it is understandable, the symbol looks like a samari helmet. Your over thinking it. pic.twitter.com/ivNzugrNh6

Congratulations on ruining the Punisher logo for all of us, racists! pic.twitter.com/2UHb7yDQYz