Dating back as far as 2000BC, the Mayans’ impressive constructions can still be seen in the jungles of southeast Mexico, Guatemala, Belize and western parts of Honduras. Perhaps one of the most famous archaeological sites is Chichen Itza, the large city which is believed to have held the most diverse population of the civilisation. The Mayans believed the rain god Chaak resided in caves and natural wells nearby known as cenotes and one such opening discovered in Chichen Itza is providing a unique insight into the past.

Mr Gates said: “Guillermo and I waste no time setting off into the deepest jungle of the Yucatan.

“I’m eager to understand the secrets of Holtun, a cenote that has only been explored by a handful of archaeologists before me.

“Getting there is no walk in the park, but this rarely explored cenote may hold the answers to the collapse of the Mayan Empire.” 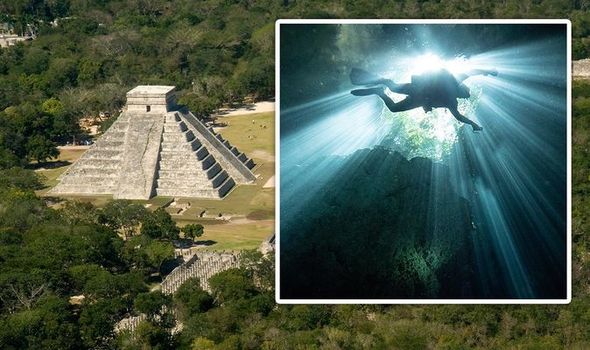 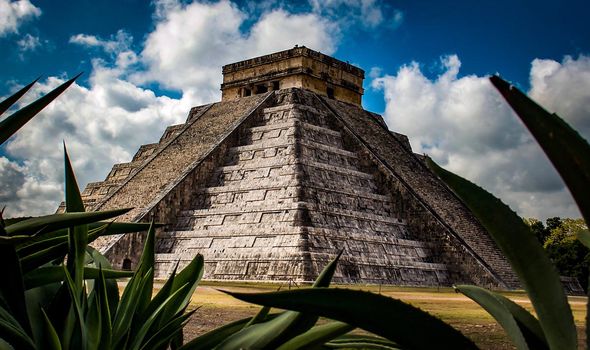 Mr De Anda explained the dangers of heading into the well to Mr Gates.

He said: “It was only discovered a few years ago and it is 78 feet deep.

“We’re going to use a rope to get to the bottom, there’s no other way.

“We have only had three people fall in so far, that’s not much.”

Mr Gates then descended down the cavern, describing what he could see. 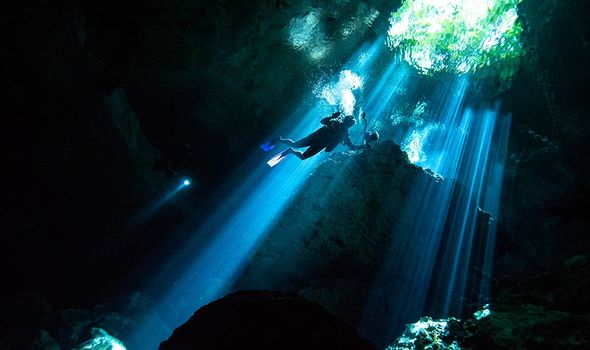 He said: “It’s a huge cavern, bats everywhere, the tiny entrance above is actually a door at the top of a domed cavern more than 100 feet wide and dripping with stalactites.

“As I approach the water, I feel overwhelmed with adrenaline.

“Since this cenote was rediscovered only about a dozen people have made this descent into the darkness.

“As I hit the water, the reality of my situation sinks in, I’m floating in black water and there’s no way out but up.” 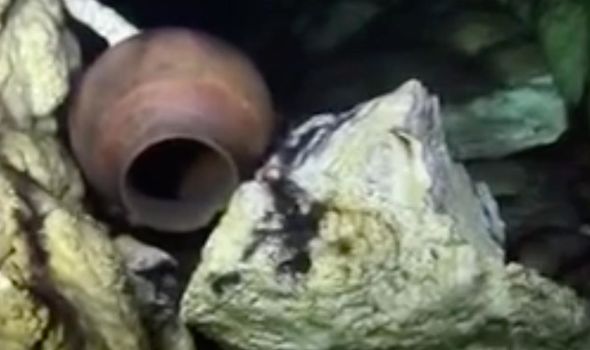 He was joined by Mr De Anda minutes later and the pair began a dive below the water, where the bottom of the cave reached 150 feet.

Mr Gates explained: “Once Guillermo arrives we don our masks and descend, under the water it is cold and visibility is good but very dark.

“It looks like it goes down forever, a bottomless pit.

“I feel like I’m floating, not in water, but space.

“The team has made a number of incredible discoveries down here, including that it is critical to the alignment of all of Chichen Itza.”

The presenter went on to detail some of the secrets of the Mayan that had already been discovered in the cave. 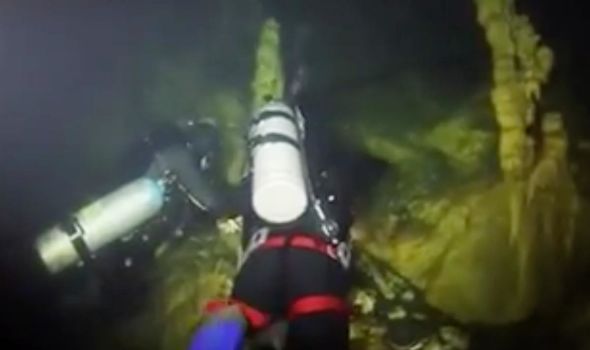 He continued: “Every May 23 when the Sun reaches its highest point, it shines directly down into the mouth of Holtun, bathing the black water in ethereal light,

“Then, that night, the Sun sets directly in line with the cenote and the side of Chichen Itza’s main pyramid.

“Down here there are incredible pieces of pottery, incredible intact ceramics.

“As beautiful as the cenote is, it is also undeniably scary, this truly is the Mayan underworld, the home of Chaak – the rain god.

“Who knows what rituals they conducted here?”