Three media companies have successfully challenged temporary airspace restrictions that would have prevented them telecasting live footage from above Melbourne’s CBD of the ongoing protests that have rocked the city.

Nine, owner of The Age, the Seven Network and ABC were granted a stay on Thursday against two notices that banned helicopters from flying above the CBD and showing live footage of the unrest. 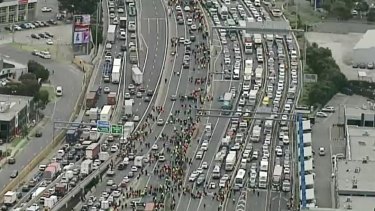 Aerial footage of the protesters approaching the West Gate Bridge on Monday.Credit:Nine News

The application, heard in the Federal Court, will now proceed to a trial. The stay means the media companies can resume live coverage in the interim.

The airspace restrictions were made on Wednesday by the Civil Aviation Safety Authority at the request of Victoria Police. They were set to remain in place until 9am on Sunday.

Police originally sought to ban aircraft from flying above the inner city to a height of 2500 feet (762 metres). But later on Wednesday, they said the restrictions would include a provision to allow the media outlets to operate aircraft in the CBD but delay publishing live footage by 60 minutes or until after the operation had concluded.

Police said they asked for the restrictions on live footage because “protesters were actively monitoring aerial live streams, compromising the police operation and putting the safety of members at risk.”

The restrictions also included a requirement that pilots seek approval from the police air wing before taking off to ensure there were no safety risks.

But Will Houghton, QC, representing the media companies, told the court there was no imminent danger to the public if the helicopters hovered above Melbourne broadcasting footage of the city.

“The public is entitled to know, first-hand and live, what is happening in the city of Melbourne,” he said.

Mr Houghton said Victoria Police had no power to impose the restrictions, including the 60-minute delay on footage. 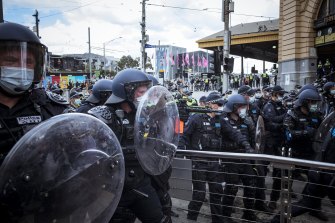 He told the court citizens should also be able to observe the conduct of protesters firsthand, so they could form their own views about the demonstrations.

Peter Hanks, QC, acting for the aviation authority, said the media networks had not attacked the validity of the orders. He argued the authority had the power to make the orders based on its opinion.

Federal Court Justice Helen Rofe said there was a “serious question to be tried on the application”.

The matter is likely to be heard again in court within the next fortnight.

Our Breaking News Alert will notify you of significant breaking news when it happens. Get it here.