'DWTS': Cheryl Burke Described How Emmitt Smith Respectfully 'Put Me in My Place' After She Lost Her Temper

Peak medical groups are pushing the state government to invest billions more into Victorian public health to put it on a level playing field with NSW, which they say has a "vastly superior" healthcare system.

As Tuesday's state budget looms, Australian Medical Association Victorian president Julian Rait has called for a long-term commitment to establish a NSW-style system made up of public health units across metropolitan and regional areas. 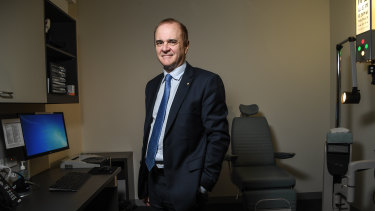 The plan would mirror the 18 public health units established in NSW over three decades, with some focusing solely on containing and preventing infectious diseases, while others tackle immunisation and prevention of chronic diseases, such as diabetes, cancer and obesity.

"This long-term investment in public health has been of great benefit to the people of NSW in their defence against COVID-19 with a health model that is known to be vastly superior to that of Victoria," Professor Rait said.

“Victoria has paid the price this year for not having adequate public health resourcing. It’s been inadequate and that’s clear to every Victorian. There was a very regrettable delay when cases started to emerge in June during the second wave and the government’s ability to get on top of that.”

While Victoria endured extensive and tough lockdowns, NSW kept its economy relatively open despite a continuous flow of COVID-19 cases.

Professor Rait said the pandemic had exposed weaknesses in Victoria’s public-health capabilities, with preventive health interventions often struggling to get funding over what were seen as more urgent issues, such as new hospital wards and beds.

The Age reported in July that while NSW had invested $1.6 billion into public health in last year’s budget; Victoria allocated a little under $600 million.

At the moment the state relies on the chronically under-funded Melbourne-based VicHealth service rather than streamlined public-health units across the state, Professor Rait said.

"The state's public healthcare models is woefully under-resourced," Professor Rait said. “There is an enormous disparity between what we spend on acute health and prevention. Under the stress of a pandemic, partially our emergency departments, public healthcare system and some of our hospitals were found to be deficient."

Professor Rait also suspects that COVID-19 clusters which spread rapidly in Victoria during the second wave, including in public housings towers and aged care, could have been handled better had localised public-health units worked closely with general practitioners and councils.

"Properly structured localised units would, for example, have understood the complex social structures and language barriers in the public towers," he said. "They would have allowed the government to engage more with local communities and manage it a little bit less traumatically."

"They also could have monitored infection-control measures in aged care homes far more closely and between pandemics the focus could be on the more mundane matters of disease prevention."

The AMA’s push has the support of Public Health Association of Australia chief executive Terry Slevin, who warned a “chronic disease tsunami was still coming at us”.

“The COVID crisis in Victoria has certainly highlighted the poor state of public-health infrastructure in the Department of Health and Human Services there, and I think there is widespread acknowledgement that serious changes are needed to strengthen this infrastructure so that it will better weather further outbreaks and other public health crises in future,” Professor Slevin said.

The plea comes as lifesaving cancer screening tests plummeted in Australia during the coronavirus pandemic, fuelling fears of a surge in delayed diagnoses.

The Age has also previously revealed that some Victorians were having heart attacks at home instead of going to emergency departments amid fears they would overburden hospitals, while others who were chronically ill avoided potentially life-saving pathology tests.

The PHAA is calling for a public-health officer training program to recruit medical and non-medical staff over three years to create a public-health workforce that could lead state efforts during pandemics and other public-health crises. NSW already has such a program.

“Let's prevent the next crisis before it occurs," Professor Slevin said.

Professor Rait also called for a greater investment in the state’s healthcare watchdog, labelling Safer Care Victoria a “toothless lion” due to chronic underfunding when compared to its NSW counterpart.

“I don't think it’s achieved its full potential and we need to look at something more akin to the NSW’s clinical excellence commission which is about four times the size.”

"The government is investing in major health projects across the state as part of its $7 billion health infrastructure build program, ensuring Victorians get the very best care, when they need it most," she said. "We will have more to say in Tuesday’s budget."

Celebrities
Get the best celeb exclusives and video house tours to your inbox every evening with our daily newsletter Jacqueline Jossa...
Lifestyle
The future of the two main coal mines digging under Sydney's water catchment hangs in the balance with one closing...
TV & Movies
Cheryl Burke of Dancing With the Stars’ is a three-time Mirrorball champ. In season 3, Burke was paired with former NFL star...
World News
The outgoing boss of managed isolation and quarantine has hit out at Kiwis who broke out of their facilities and...
Beauty
After rocking a buzzcut for weeks, Halsey debuted her shoulder-length rainbow hair makeover featuring colors of purple, green and more!...
Fashion
I've Had This Gap Chunky Knit Sweater For 2 Decades, and It's Still My Favorite! I'm no Marie Kondo. I...
Recent Posts
We and our partners use cookies on this site to improve our service, perform analytics, personalize advertising, measure advertising performance, and remember website preferences.Ok