Pesticides, medical waste, asbestos and more than 20,000 acetylene tanks have been discovered during a clean-up at an illegal subterranean toxic waste dump on an isolated bush block in Victoria’s far north-west.

The Environment Protection Authority has removed more than 2000 tonnes of hazardous materials found buried on the property south of Kaniva by a criminal syndicate that has allegedly been linked to more than a dozen illicit chemical stockpiles and two major industrial blazes in Melbourne. 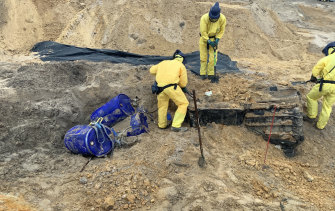 The clean-up operation, which is now in its eighth month and expected to cost up to $40 million, has also made bizarre discoveries, including the corpse of a large dog wrapped in a mattress, clothing with cash stuffed in the pockets, and a pool of bright blue liquid.

EPA project manager Julian Bull said there was “no method to the madness” of what was revealed in the 12 of 32 known burial pits that had so far been excavated.

“As much as we know right now, every single time we open up a new hole we get a new surprise,” he said.

“There’s been a lot of times where we’ve had to stop work and send in experts to work out what we’re dealing with and the best approach to clean it up. Things were tipped in together that just shouldn’t be anywhere near each other.”

This includes hundreds of steel barrels and 1000-litre plastic containers filled with flammable solvents, some of which had leaked and contaminated nearby soil. Burned out debris found in the pits indicated that some containers caught fire.

The waste pits were sitting about 60 metres above a vast underground aquifer that is used to irrigate farms and supply water for communities near the border of Victoria and South Australia.

But the EPA reports that a series of testing bores near the dumped waste and surrounding the 1400-acre property showed the spills were contained and there was no contamination in the groundwater.

One of the biggest problems for the clean-up workers was the discovery of 20,000 acetylene gas tanks because there is no domestic recycling industry where they could be processed.

“The options are to stockpile them or ship them overseas, which is very expensive. Our contractors are developing a pilot program to do the processing onsite,” Mr Bull said. “The site posed a significant environmental and fire risk. We can’t sit and wait.”

The EPA estimated there might be as many as 50,000 tanks buried on the property.

The owner of the property Graham Leslie White is facing more than 100 charges from the EPA and WorkSafe.

The EPA estimates the clean-up at the bush block will be completed in late 2022.

“It’s meticulous, tedious work with personnel in hazmat suits all day, every day just removing inch by inch of soil to get this hazardous waste out of the ground,” Mr Bull said.