Melbourne’s pop-up outdoor dining and drinking venues could become a permanent fixture under a City of Melbourne proposal to enshrine the “parklets” and footpath eateries that popped up during the pandemic and helped drive the CBD’s economic recovery.

The proposal would allow businesses to offer outdoor dining along footpaths and in parklets, parks and laneways through a program of subsidised permits commencing from July this year. 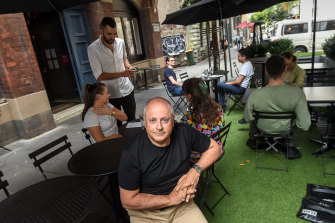 A recent survey by consultancy Urbis found that every dollar spent by diners on the program yielded a $2.68 benefit for the city’s economy.

“The program has been a boost for local businesses and a boost for Melbourne’s renowned foodie culture. From tucking into a porterhouse or casually enjoying a glass of pinot noir, Melburnians have embraced dining and drinking in our parklets,” Cr Capp said.

“We asked people for their feedback and 96 per cent said outdoor dining had been a good addition to the city and 81 per cent want outdoor dining to become a permanent feature.”

The City of Melbourne unveiled its outdoor dining experiment in September, modelling it on New York’s Open Restaurants initiative, which was credited with helping 9500 restaurants and cafes stay afloat amid COVID-19 restrictions.

A survey of 150 businesses with outdoor dining parklets reclaimed from on-street car-parking spaces showed 81 per cent believed the scheme had helped them reopen.

Hospitality is a critical industry for the city’s economy and it was devastated by the impact of the pandemic, councillor Roshena Campbell said.

“Every extra patron utilising the outdoor dining program helped a local business to stay open during the most difficult trading conditions in living memory.

“To have outdoor dining become a lasting feature would be a fantastic outcome for our city.”

The survey also found that three-quarters of owners said having pop-up dining spaces outside had enabled them to maintain seating capacity while patron numbers were restricted indoors.

The scheme has been embraced by venues across the city and suburban hubs.

The City of Yarra is also investigating making pop-up venues permanent, endorsing a statement describing them as aiding the inner-north’s “social recovery and wellbeing by encouraging our communities to occupy public space”.

Melbourne City Council estimated that at least 75 per cent of venues across the municipality generated more than $1642 in additional revenue per week from their outdoor dining areas. Those in the CBD generated an estimated additional $2150 per week.

The outdoor dining program began in October 2020 to support hospitality traders to operate within COVID-19 restrictions and density limits, was extended in February and is set to conclude on June 30. The City of Melbourne issued a total of 1592 permits between October 2020 and April 2021, including 933 new permits for extended outdoor dining.

More than 200 outdoor dining parklets were installed and 25 laneways were closed on weekends as part of the program.

Get a little more outta life

Start your week with practical tips and expert advice to help you make the most of your personal health, relationships, fitness and nutrition. Sign up to our Live Well newsletter sent every Monday.