‘It was like an explosion’: Horrifying footage captures moment Range Rover careers off A40, through Tesla Centre fence and onto parked car using charging point before flipping onto Park Royal railway track leaving one woman dead – as residents describe ‘mayhem’

Horrifying footage shows the moment a Range Rover crashes through a fence before colliding with a parked Tesla and ending up on a railway line – leaving one person dead and three injured.

A man in his 50s was sitting alone charging his vehicle at the Tesla Centre close to Park Royal underground station at 3.48am when the Range Rover veered off the road, crashed into a metal barrier and slammed into the £50,000 car below.

A woman in her 20s, believed to be a female passenger in the Range Rover, died at the scene off the A40 Western Avenue, West London.

The male driver of the 4×4, which is said to have flipped over into the station before it landed on the tracks of the Piccadilly Line, is in a critical condition, while another female passenger is being treated for non life-threatening injuries. All three Range Rover passengers are in their 20s.

The man who was in the Tesla has been hospitalised for less serious injuries.

Footage shows the moment the Range Rover crashes through the fence by the Tesla Centre, causing significant damage to a number of charging points.

One resident told the MailOnline they recall hearing a ‘mini explosion’ in the early hours of this morning before police were called at 3.48am to the ‘mayhem’.

Another – Andrew Wood, who lives in a block of flats next to the station – said: ‘It woke me up. I heard this huge bash at about half past three. I thought it was somebody breaking into one of the garages.

‘The car must have smashed the fence, because behind that is the pedestrian walkway and it’s come right over that. Ten minutes after there were helicopters, it was like the Third World War.’

A police source said that the Range Rover crashed through the Tesla garage and ‘flipped into’ Park Royal station.

Almost 10 hours after the horror crash a specialist train arrived at Park Royal station to remove the wrecked 4×4 at around 1.30pm. The mangled wreck was loaded on to an open carriage and taken away. Engineers on site hope to re-open the westbound Piccadilly Line between Acton Bridge and Uxbridge later today. 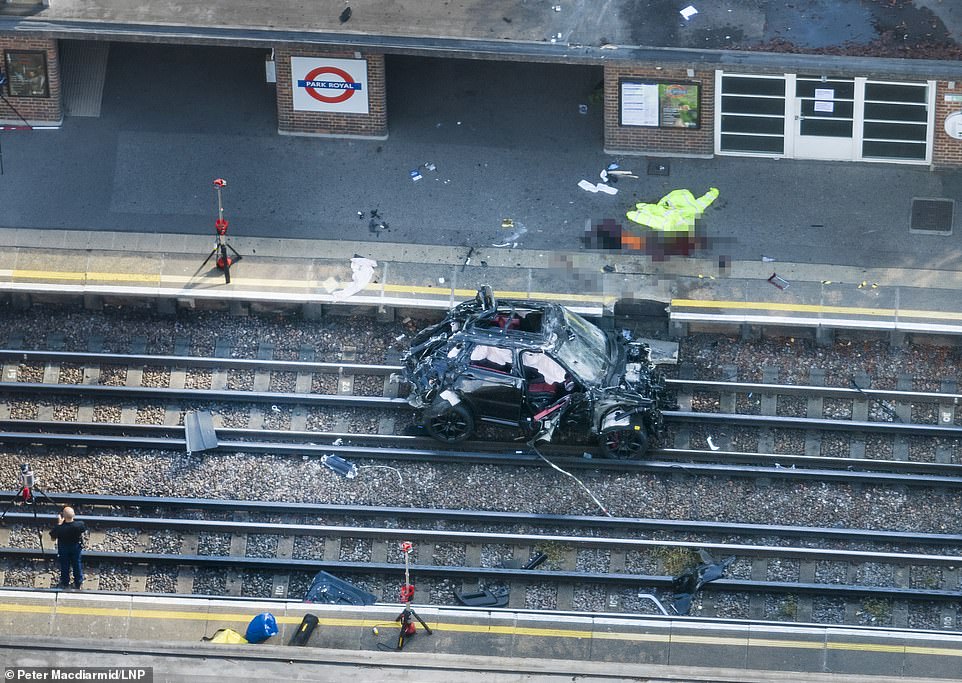 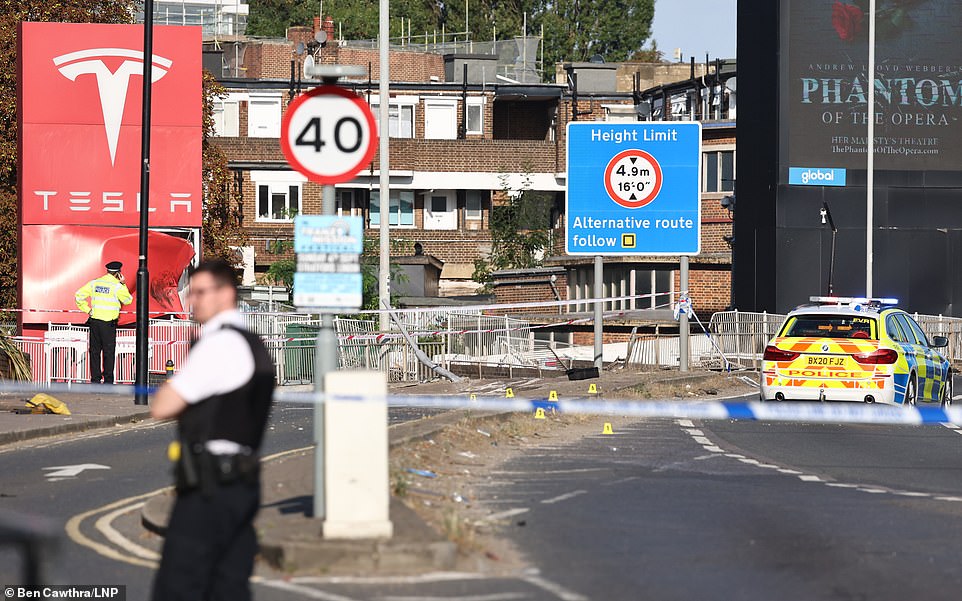 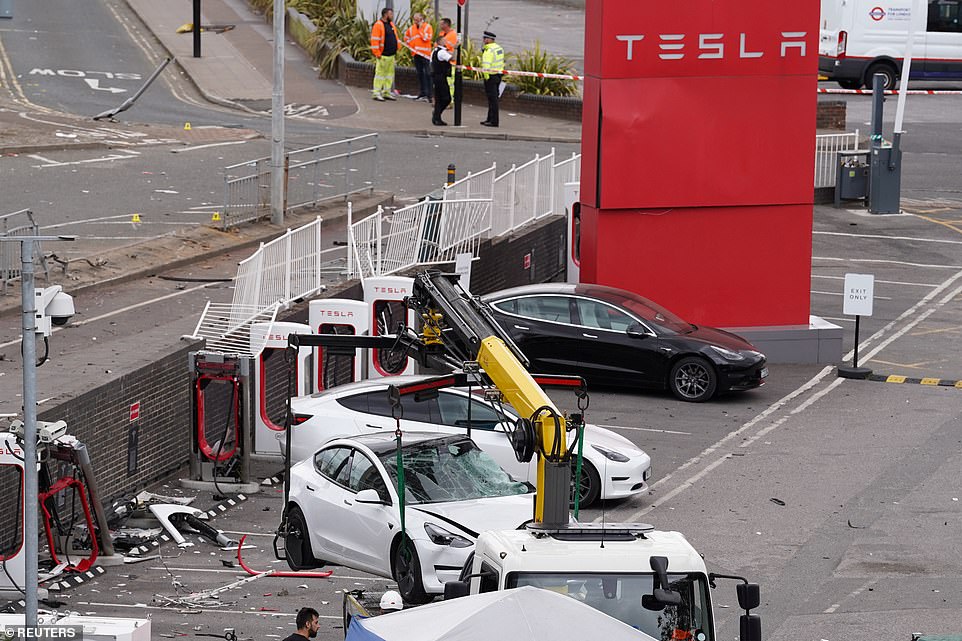 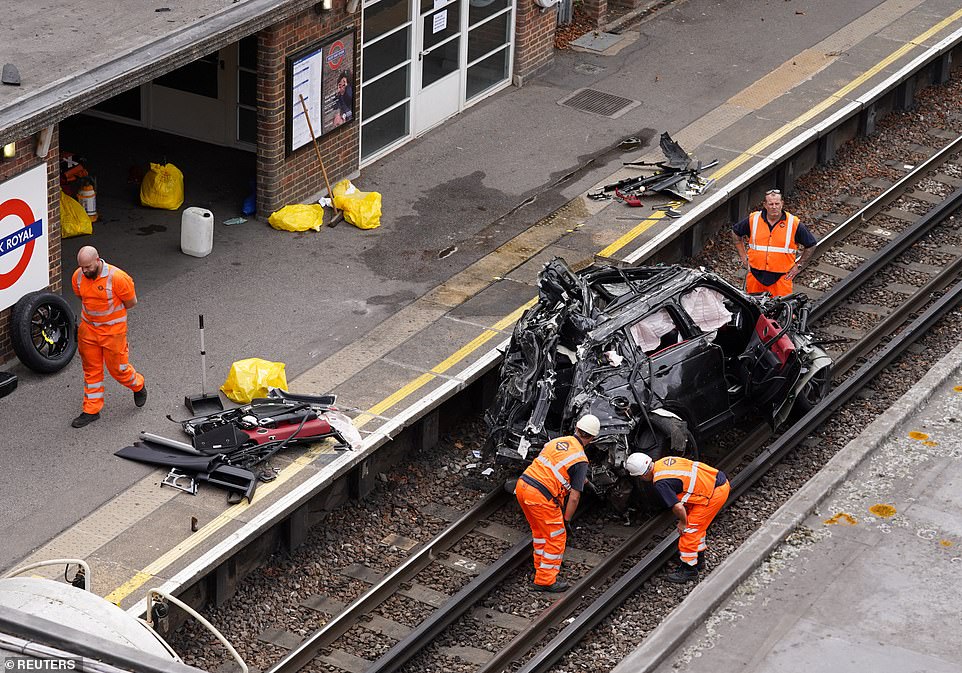 Rescuers stand near the crash site where a Range Rover veered off the road onto the Piccadilly Line train track after colliding with Tesla, at Park Royal Station in West London 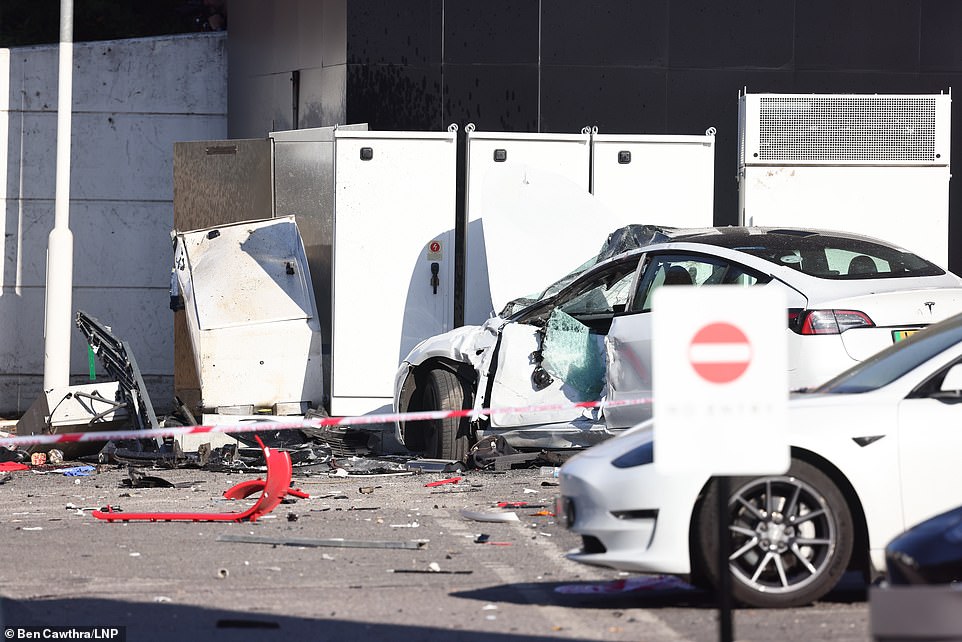 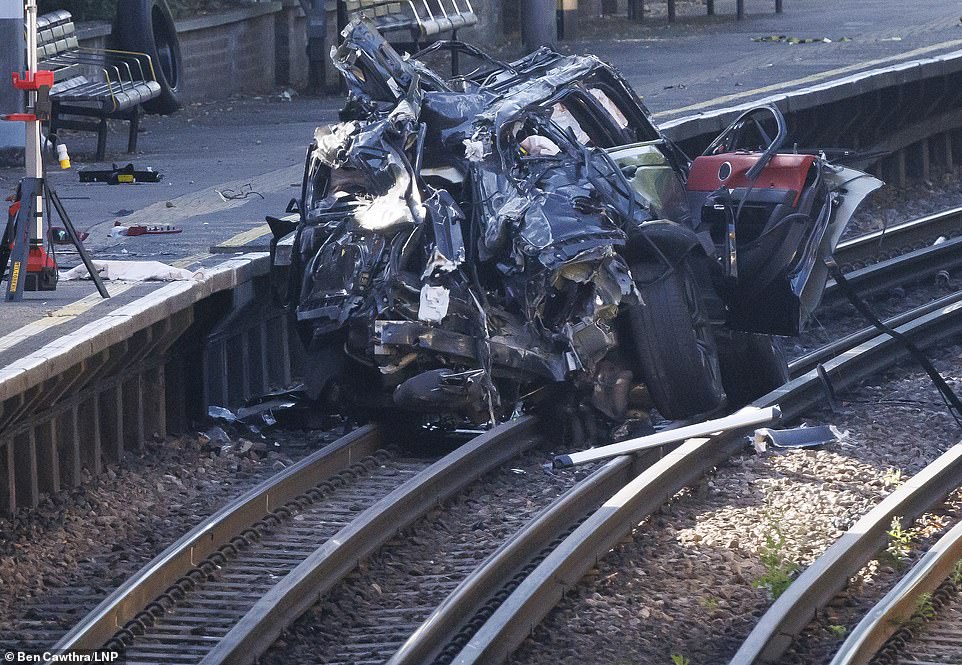 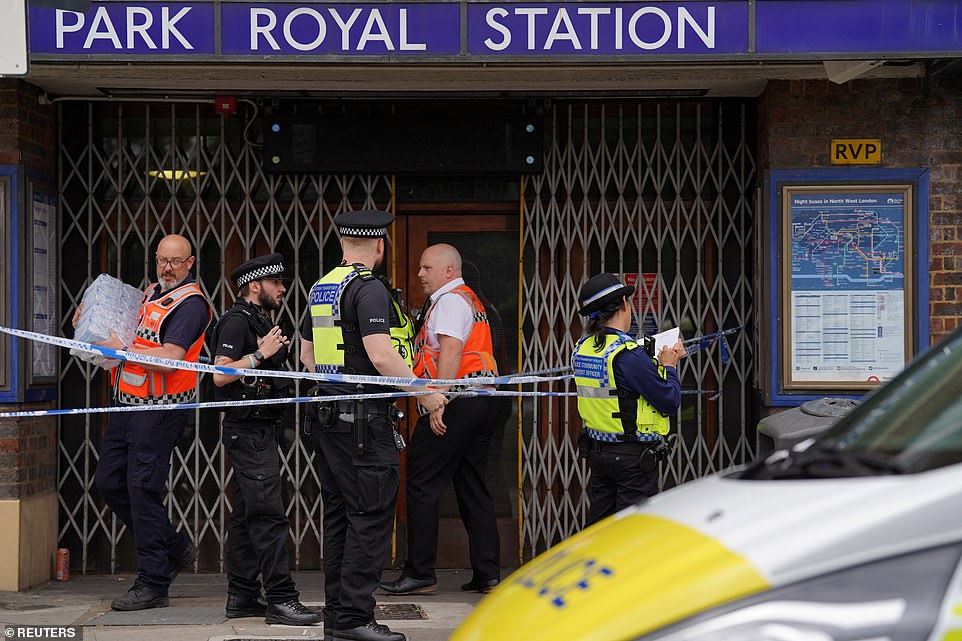 Police stand at the crash site where a Range Rover collided with Tesla and then veered off the road onto the Piccadilly Line train track, near Park Royal Station in West London 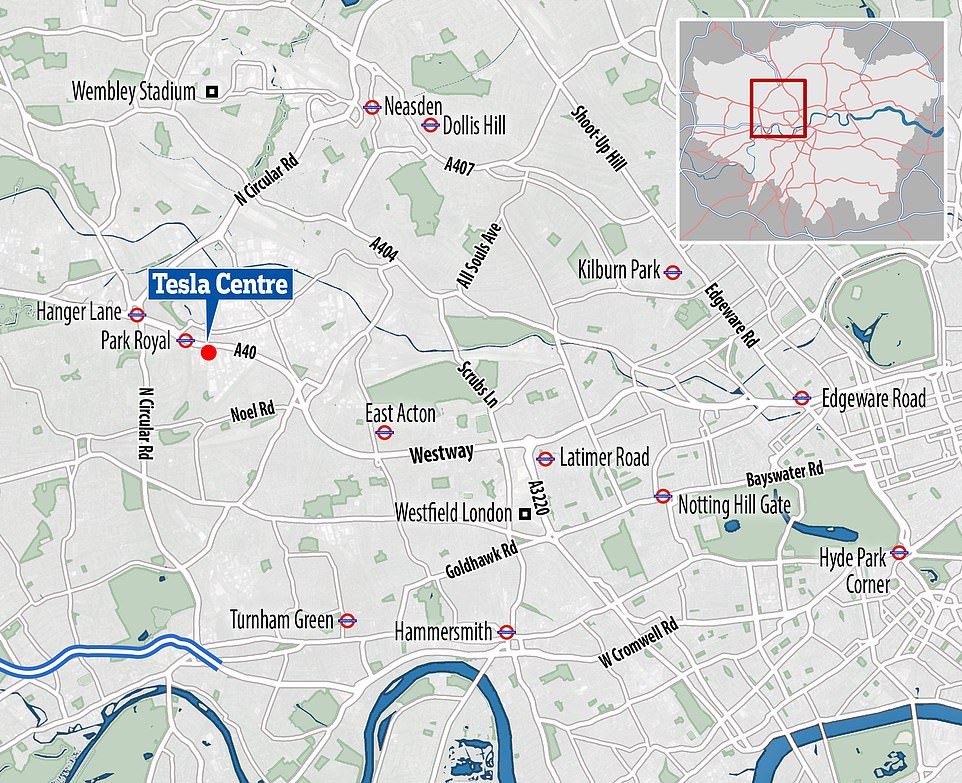 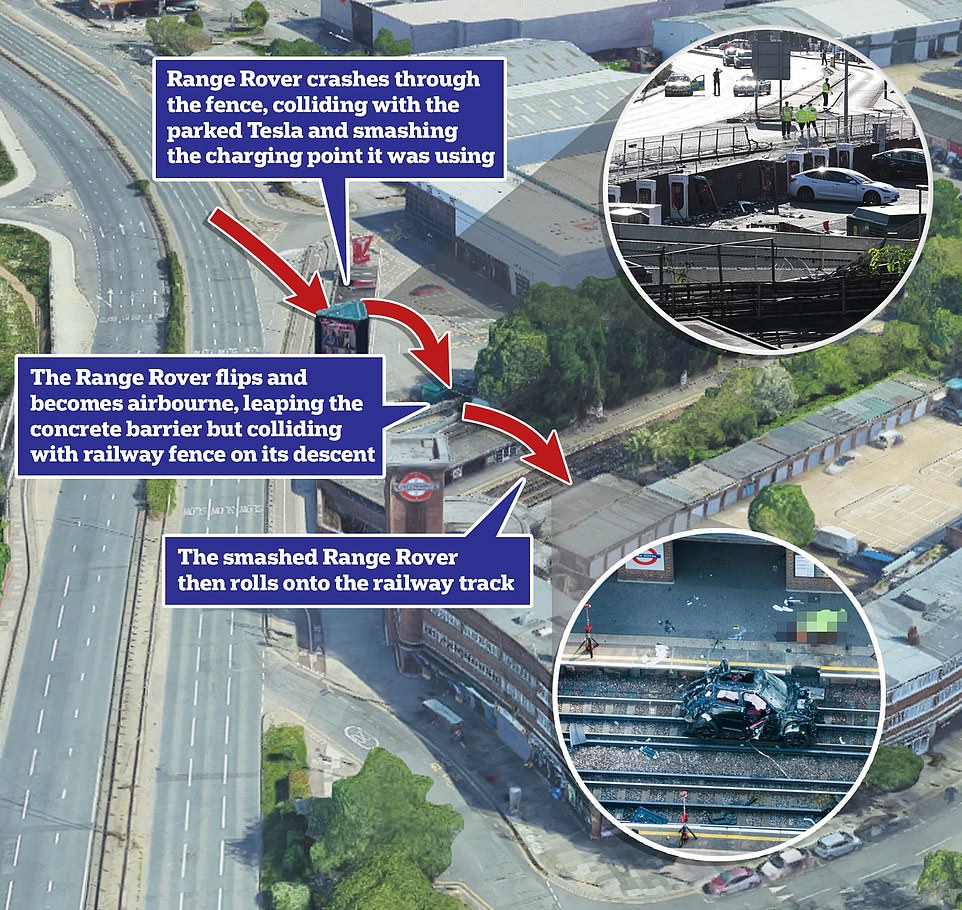 Nada Alobaidi, 31, who also lives in the block of flats next to the station, said: ‘I heard a big crash. I came outside and saw a lot of police and an ambulance as well.

‘There was a lot of smoke. I didn’t see the car because it was during the night.

‘The A40 can be quite dangerous around Park Royal Station. Car accidents do sometimes happen.’

Officers said the Piccadilly Line and the A40 will stay closed for a ‘considerable period of time’ as they placed a cordoned around the scene.

**Did you witness the crash?**

Officers await formal identification of the fatality and confirmation that next of kin have been informed.

A police source told the MailOnline: ‘The Tesla was parked off the road when it was hit by the other car that careered off the A40.

‘Unless there was some catastrophic mechanical failure we will be looking if drink was somehow involved.

‘The Tesla was not on the road and the Range Rover came at speed and crashed through a metal barrier and into the stationary vehicle.’

Another police source said that the Range Rover crashed through the Tesla garage and into Park Royal station.

They said: ‘The Tesla was stationary. The other car crashed into the Tesla garage and flipped into the station, landing on the tracks.’

The western section of the A40 – one of the main routes out of central London – remains closed to all traffic.

Local resident Andrew Wood told the MailOnline how he was woken by a ‘mini explosion’ as the Range Rover careered off the road and on to the underground tracks.

The 61 year old said: ‘There was a huge bang, like a mini explosion. Then it was silent for a few seconds and all you could hear was a car alarm going off.

‘I came out of my flat to see what had happened but assumed it was a collision in one of the roads nearby. I didn’t look at the track. A few minutes later all you could hear were sirens and a police helicopter overhead. It was mayhem.’

Mr Wood said the only way for the 4×4 to have ended up on the track was by becoming airborne and going over the flat roof of the waiting room at Park Royal underground station.

Photos taken at the scene from a roof overlooking the wreckage show a break in a metal fence alongside the platform. The shattered remains of a charging point can be seen about 60 metres away from the track.

The wrecked white Tesla, which had its rear passenger side badly damaged in the collision, was later seen being loaded onto a flat bed truck and taken away from the scene of the crash.

Another resident in a nearby block of flats said she was woken by the sound of sirens as emergency services converged on the scene. 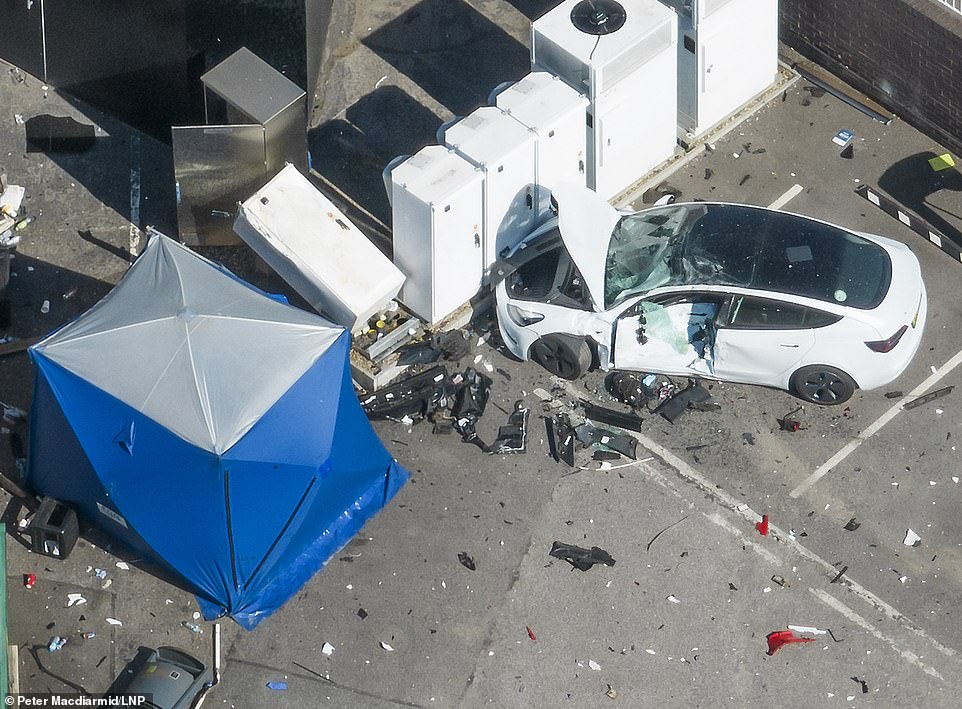 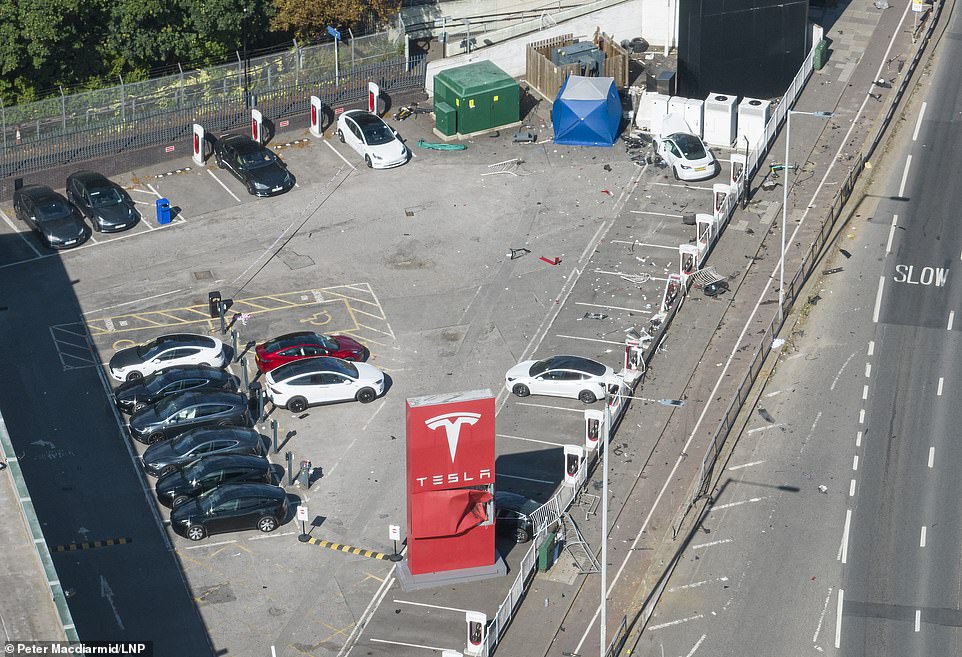 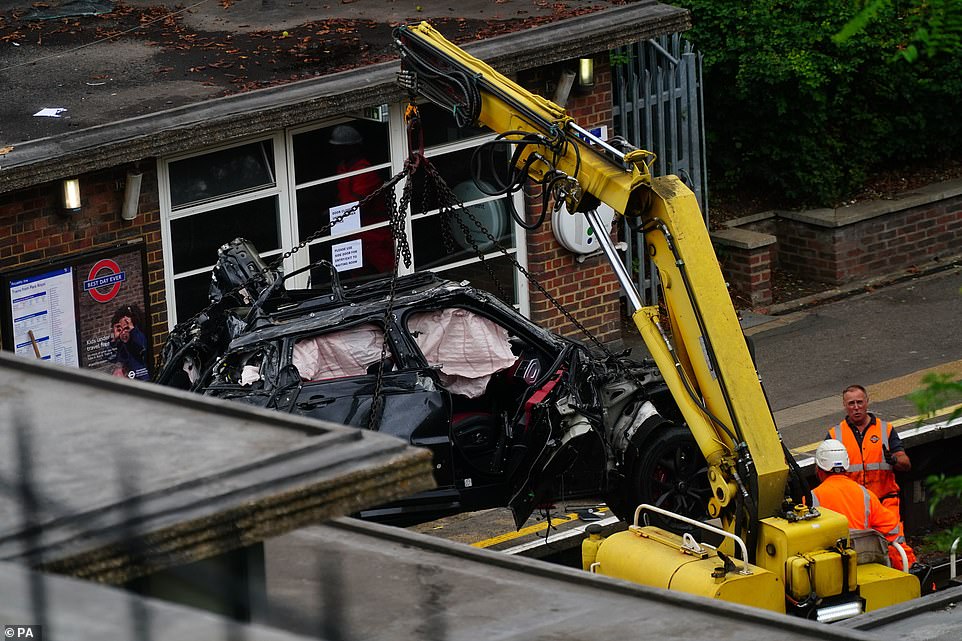 Almost 10 hours after the horror crash a specialist train arrived at Park Royal station to remove the wrecked 4×4 at around 1.30pm. The mangled wreck was loaded on to an open carriage and taken away. Engineers on site hope to re-open the westbound Piccadilly Line between Acton Bridge and Uxbridge later today 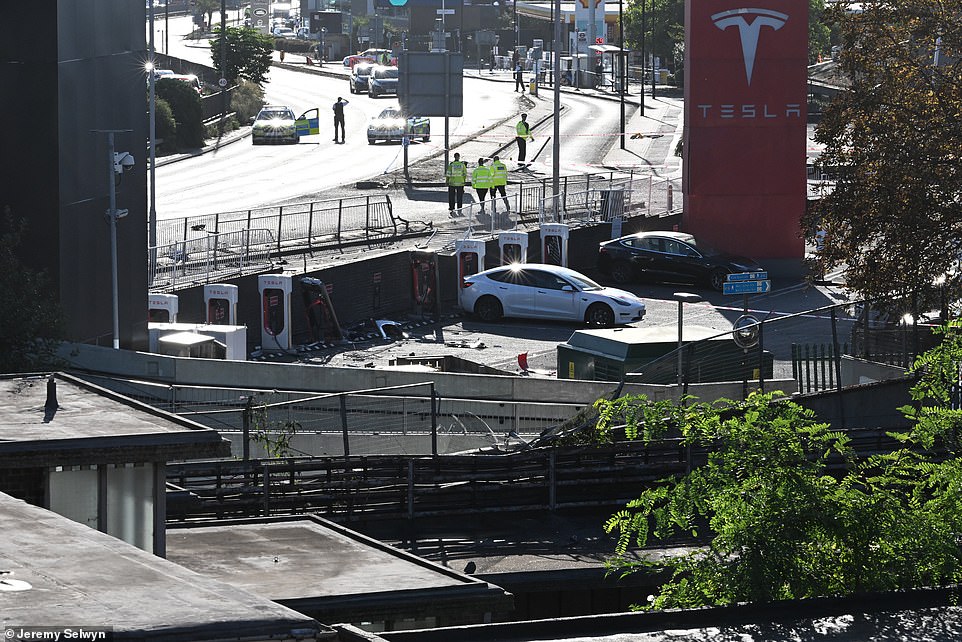 An image from the station shows the Tesla sign in the background, the smashed railings above the charging point then another fence destroyed (in front) close to the railway track

One woman, whose flat overlooks the A40, told the MailOnline:’ We didn’t hear the crash, but then we were woken by al the sirens.

‘When I looked out the window all you could see were blue flashing lights. It was quite scary.’

In a statement the Met Police said: ‘Police were called to a collision on the A40 westbound near Park Royal Underground Station at 03.48hrs on Monday, 22 August.

‘Officers attended along with ambulance colleagues. It was reported that two cars, a Range Rover and a Tesla, had been involved in a collision and the Range Rover had left the road and gone onto the railway line. It is believed that the Tesla was stationary at the time.

‘Despite the efforts of emergency services, a woman aged in her 20s – believed to have been a passenger in the Range Rover – died at the scene. Officers await formal identification and confirmation that next of kin have been informed.

‘The Ranger Rover driver, a man in his 20s, has been taken to hospital where his condition is critical. The condition of a second Range Rover passenger, a woman in her 20s, is not life-threatening,

‘A man, aged in his 50s, who is believed to have been with the stationary Tesla, was treated for injuries that have been assessed as non life-threatening.

‘Cordons were put in place following the collision and the Piccadilly Line was part suspended.’

A spokesperson for London Ambulance Service later clarified to the MailOnline that the two people injured in the Land Rover are being treated in hospital for serious injuries while the woman in the Tesla was not as seriously hurt in the crash. 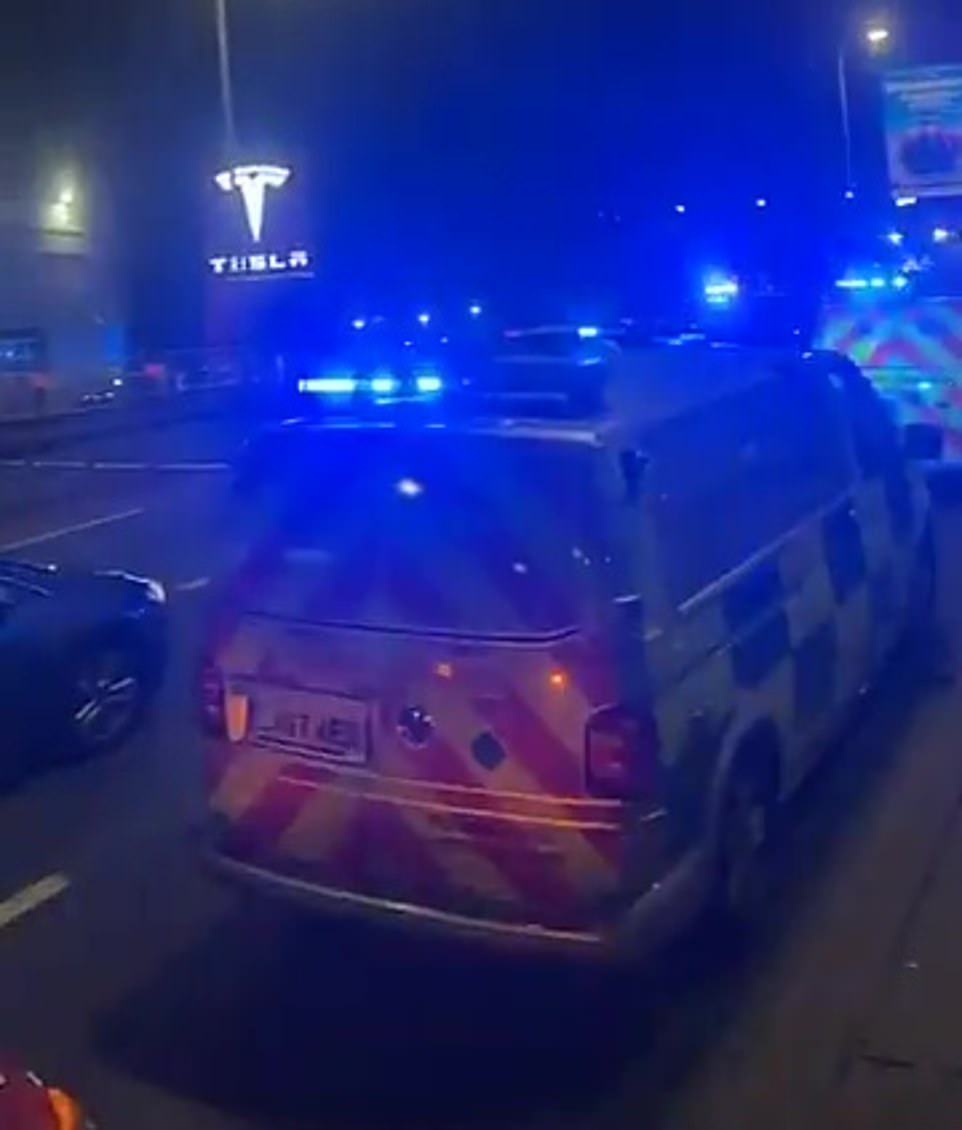 Police were called at 3.48am to the crash on the A40 near Park Royal underground station after the Range Rover ended up on the railway track. Pictured: Met Police at the scene 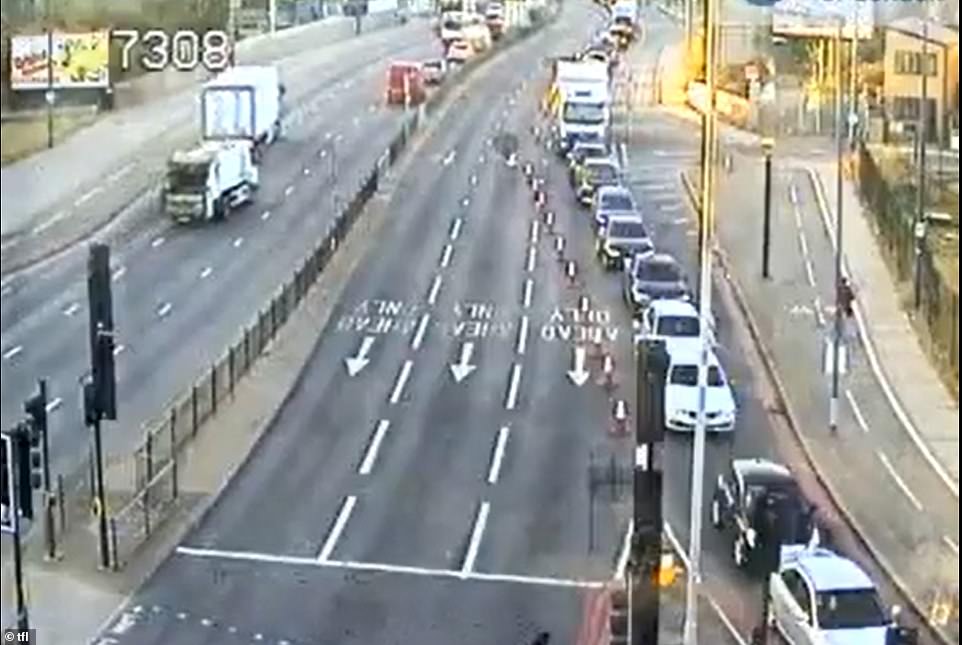 One woman has died after a Range Rover and Tesla crashed in central London leaving three people also injured. Pictured: Traffic on the A40 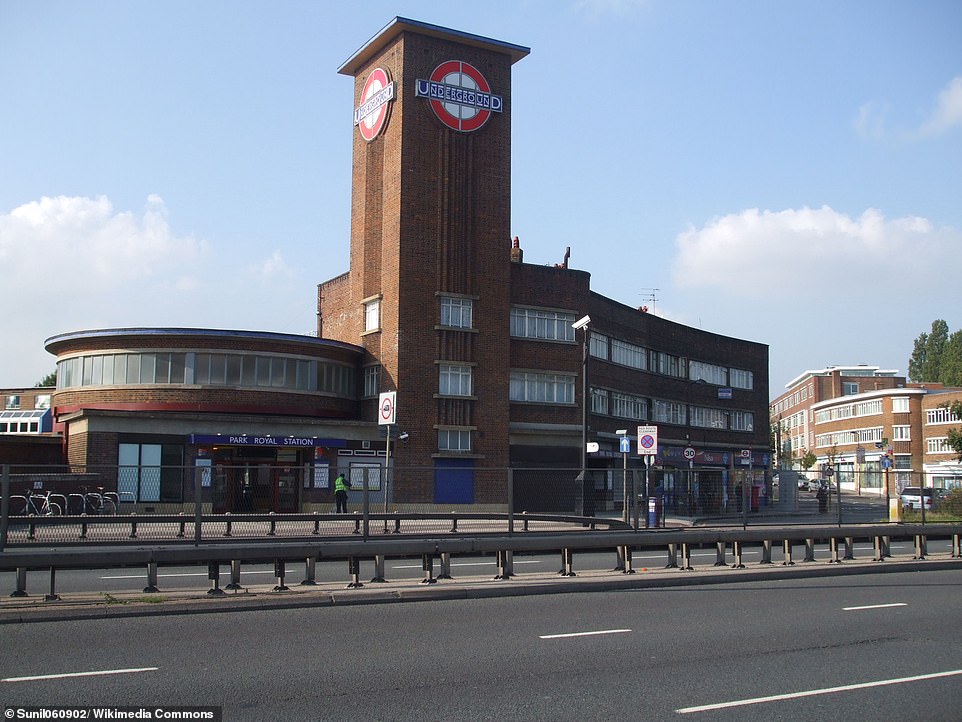 A spokesman from Transport for London said: ‘In terms of impact on the network, the A40 Western Avenue is closed westbound at the junction the A4000 Wales Farm Road (Gypsy Corner), the Piccadilly line has no service between Acton Town and Uxbridge and two bus routes are on diversion.’

The manager of London Underground and travel services in the capital also told the MailOnline that the Land Rover was not hit by a train as there was no rail services running at that time and no engineering works happening on the tracks either.

‘Having reviewed the circumstances, there is no indication that further RAIB involvement would lead to new safety recommendations.

‘It happened when no trains were running so we can confirm that the road vehicle was not struck by a train.’

It follows the travel problems suffered by rail passengers after tens of thousands of workers went on strike again in a long-running dispute over pay, jobs and conditions.

Members of the Rail, Maritime and Transport union (RMT), the Transport Salaried Staffs’ Association (TSSA) and Unite walked out for 24 hours on Saturday, affecting Network Rail and a number of train companies across the country.